After spending 10 hours on research and interviews and more than five hours on testing the grip, heat, and performance of 11 hair straighteners on four different people with different hair textures, the GVP Digital stood out from the competition with its adjustable temperature in 10-degree increments, and an easy-to-read digital display that updates in real time.

Who should buy this

Anyone can use a hair straightener, but how well a straightener will work on your hair—how straight it will get, how long it will stay that way, and how much damage it will endure from the heat—depends on a combination of genes, climate, and practice. The curlier or more textured your hair, the more heat, time, or styling products you’ll need to invest to get the style you want; the finer your hair, the more easily it will be damaged by high temperatures. If you live in a humid climate, your hair will reabsorb water more quickly, which restores its natural (less straight) shape. With practice, you can figure out the ideal temperature for your hair and how to best maneuver the tool to create the style you want, taking things low and slow at first is best.

The downside is that a straightener can damage hair if used incorrectly—or even correctly. (See the How we picked section in our full guide where we address the heat-hair conundrum.) If you can straighten your hair to your liking with a less direct heat method, like a hair dryer, you should probably stick with that.

Hair straighteners, or flat irons, are essentially two hot metal plates, held like tongs, that you slide over sections of hair to dispel water from individual strands, leaving them sleek and smooth. No straightener avoids split ends, frizz, or breakage entirely, because heat damage is an inevitable consequence of applying heat to hair.

Wider plates are bulkier and increase the chances of accidentally clamping the same sections of hair multiple times. We aimed for straighteners with plates on the long side, but not so long the straightener wouldn’t be maneuverable.

We knew weight and cord length would be important, as they are with hair dryers. We also preferred products with warranties (because sometimes the electronics simply burn out) and automatic shutoff features, as leaving hot plates lying around is dangerous.

Of the models we looked at, we decided to test 11 devices. We weighed each straightener on a postal scale, measured the length of the cords, and used a stopwatch to time how long it took to heat up. Then we turned on each straightener and compared the button placement, temperature ranges, and temperature dials. Next, we tested the straighteners on many, many strands of 1-inch-wide dry hair. Some pieces we straightened; other pieces we flipped up or curled under. 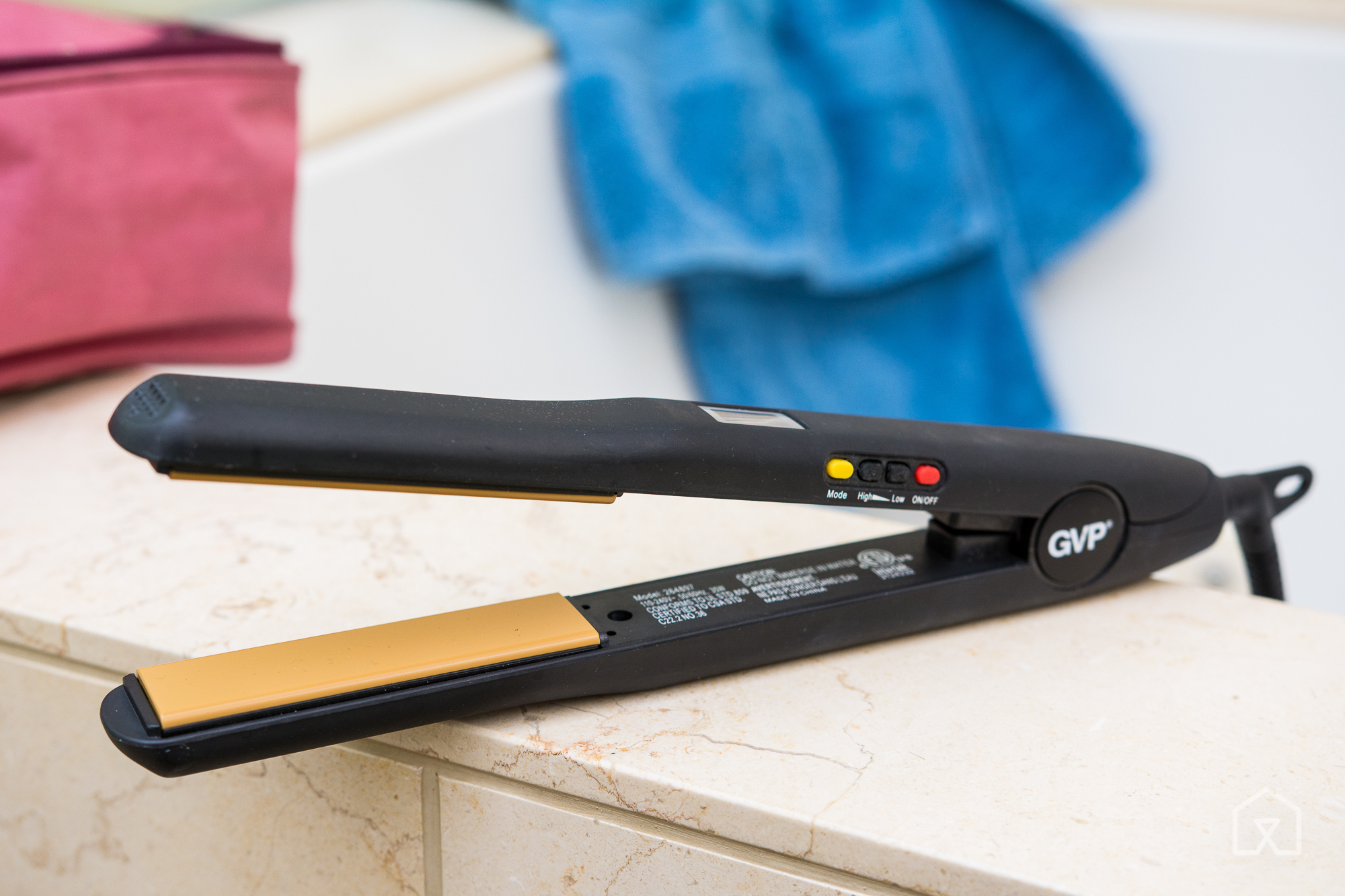 All flat irons straighten and curl hair about the same, but the GVP Digital stands out because it heats up quickly and is well-constructed enough to style hair without causing snags or dents. The GVP also includes features that are usually found on higher-end models, like a real-time digital display and accurate temperature, at a midrange price.

The GVP weighs 0.56 pounds—it was one of the heaviest straighteners we tested, but it weighed only 0.12 pound more than the lightest straightener we tested. The straightener’s other features, such as quality plates and a digital display, compensate for the added weight. The cord is 9 feet long, giving you plenty of space to plug it into an outlet that is located far from a mirror. The straightener is 13 inches long, which we found to be the perfect length to wield while styling hair—and the plates are around 3½ inches long, plenty sufficient to capture a good-size section of hair. 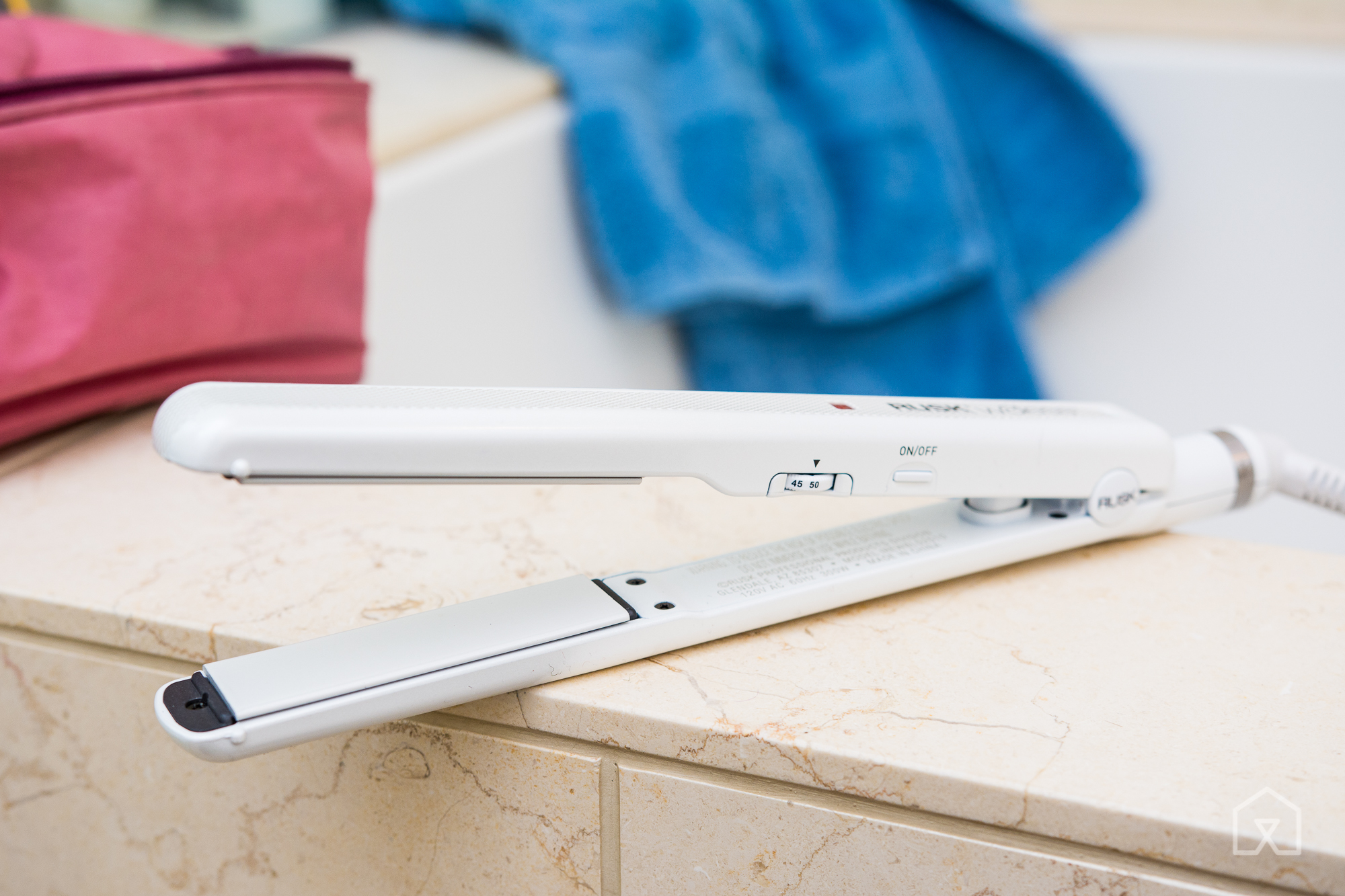 The Rusk W8less is around the same price as the GVP, but it offers a lighter and more compact design. At 0.50 pounds, it was among the lightest straighteners we tested (the lightest was Rusk’s Deepshine, at 0.44 pound). Rusk W8less was one of the easiest to hold for long periods of time.

The Rusk W8less has a manual dial that goes to 450 °F, the same max temperature as the GVP. However, it lacks some of the features of our main pick. Besides the temperature dial and the on-off switch, this straightener has no other buttons. The temperature dial goes from 1 to 50, which correspond to 10-degree increments between 240 °F and 450 °F. If you want more settings, such as auto shutoff or a display that shows the digital temperature of the straightener in real time, you may be happier with the GVP. 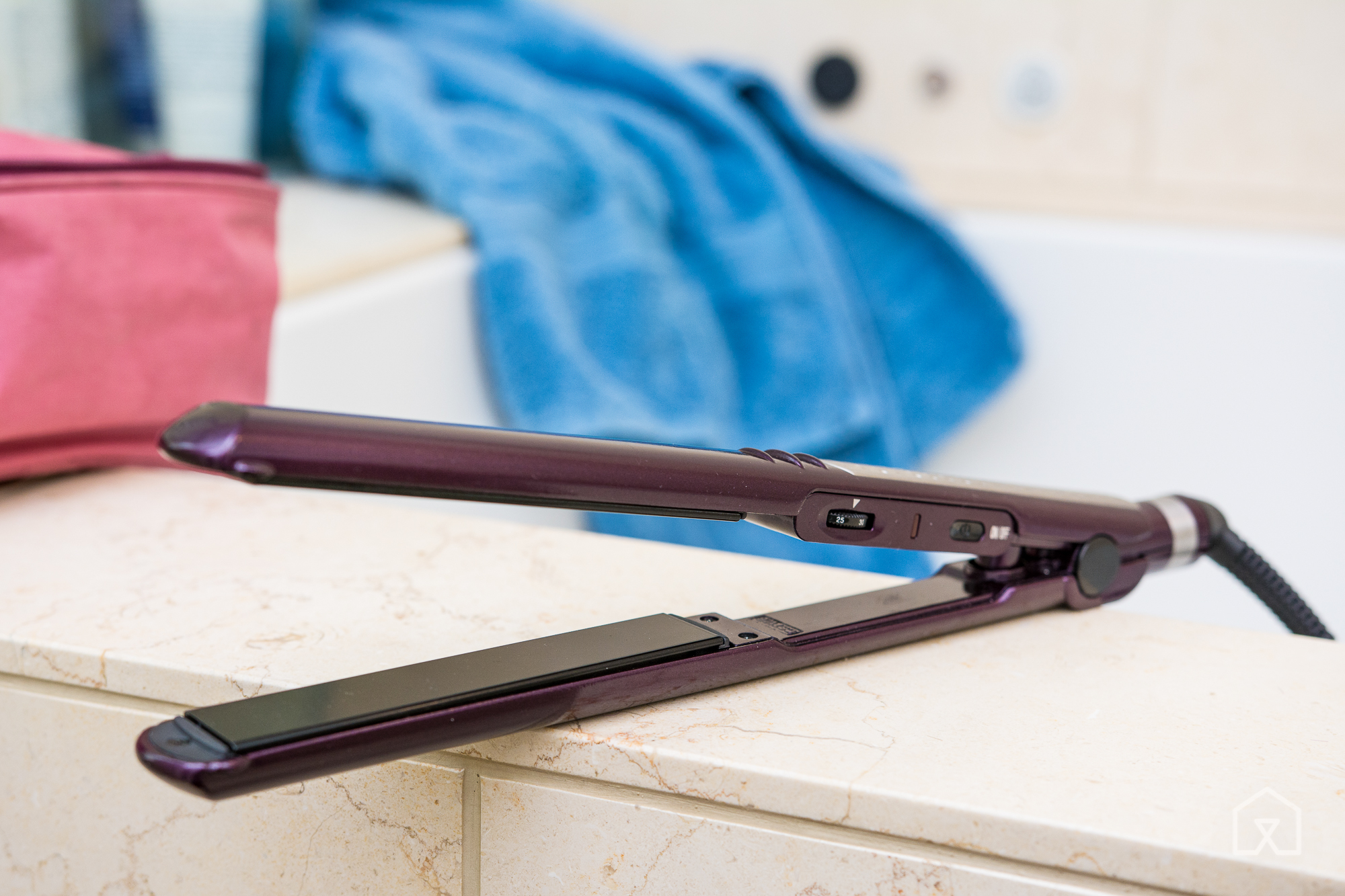 Our pick is in the middle range for straighteners, but we liked another one that costs around one-third of the price. The Conair Infiniti Pro is very lightweight—0.51 pound—and clamping the plates together doesn’t require a lot of muscle. We tested the 1-inch-wide model with a purple casing, but Conair makes this straightener in three sizes and seven colors, so finding one that suits your needs is easy.

It is slightly longer than our pick, at 14 inches, which made it a little unwieldy when styling. However, one advantage to a longer straightener is that it can straighten wider sections of hair at once, which can save time.