Android devices overtake iPhones in terms of reliability, according to report

No smartphone is perfect, and the latest reliability and performance data may help customers choose their next device more carefully.

The findings of a recent quarterly report on mobile device performance and health by analysts at Blancco Technology Group suggest iPhones have been overtaken by Android smartphones in terms of reliability over the past year. According to the study, worldwide failure rates of iPhones have significantly increased from the fourth quarter of 2015, where the percentage stood at 15 percent, to a whopping 62 percent at the end of last year. Comparatively, Android products have been nearly halved in that same time period, from 85 percent to 47 percent.

Blancco defines “failure” in the context of this study as “devices that had excessive performance issues that could not be resolved.” When breaking out the data over individual iPhone models, the iPhone 6 is found to be the least dependable across every quarter.

More: How to factory reset an iPhone (every generation)

The survey speculates the iPhone 6’s issues may have been exacerbated by the iOS 9.3.1, 9.3.2, 10, and 10.2 updates released between April and December of last year, which reportedly caused issues such as general slow down, quicker battery drain, random crashes, spotty Wi-Fi connectivity, and poor Bluetooth call quality. At worst, some devices were bricked after being updated.

According to the data, newer iPhones aren’t entirely without their faults, either. During the most recent quarter, the iPhone 6 was followed immediately by the 6S claiming the second-highest failure rate, and the iPhone 7 took the sixth spot behind the 6 Plus and 6S Plus. 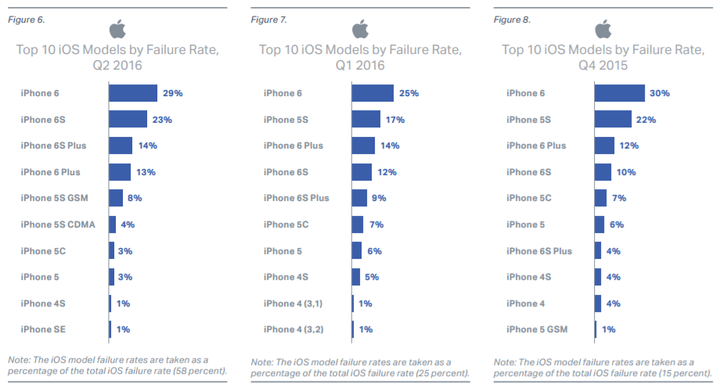 Conversely, Android devices appear to have come a long away, according to Blancco’s findings. Failure rate took a massive dive between the fourth quarter of 2015 and the second quarter of 2016, dropping from 85 percent to 35 percent, before climbing slightly and stabilizing at 47 percent.

Samsung devices top the Android failure charts every quarter, most likely due to the fact that Samsung far and away claims the most market share of any phone manufacturer running Google’s operating system. Based on Blancco’s data, the company’s products accounted for roughly 88 percent of all Android devices worldwide in the second quarter of 2016, and its brand failure rate swung from a high of 43 percent in the first quarter of last year to a low of 11 percent in the third quarter.

While the report notes Android smartphones “performed considerably better” in contrast to their counterparts running iOS, it does entertain the possibility that the discrepancy might be at least partially the result of a difference between the two communities of users. Blancco says Android owners “may be becoming more tech savvy and taking advantage of smartphone optimization tips provided in tech blogs [and] user forums.”

Finally, the study concludes with an analysis of the specific issues that plague most iPhones and Android devices. App crashing was listed as the No. 1 culprit for most Apple customers, with Instagram and Snapchat noted as the worst offenders. Android phones displayed more diverse problems, ranging from camera errors, to underperforming batteries and USB syncing glitches, depending on the model.

Blancco says its report is based on anonymous data collected from millions of mobile phones around the world brought to manufacturers and carriers for diagnostics testing.