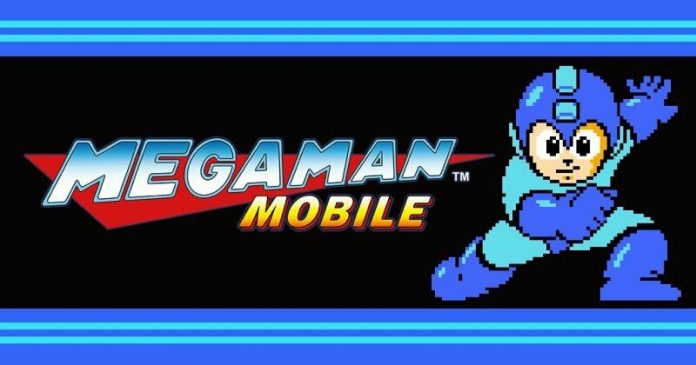 Being a child of the 80’s, Mega Man was one of the cornerstone games to which I compared other games. Jumping, shooting, insane difficulty, creative bosses and the ability to copy boss abilities. It quickly became a favorite game series. Recently Capcom has re-released it’s original 6 Mega Man games on a variety of platforms, the latest of which was mobile phones. I was extremely excited to jump back in and blast on baddies on the go, but all I got was a lot of disappointment. What went wrong? Let’s jump in.

Okay, let’s get down to it. This version of the game is a nightmare to play. The game does not have a consistent framerate at all. Jumping and moving around the screen is super choppy, and that is before anything else is on the screen but you. Once you start moving forward, the screen scrolling and enemies just confound the problem, making the framerate drop even more. I found it very difficult to aim my shots with the constant stuttering and ended up taking a lot of cheap hits all because I was unable to jump and shoot properly. I couldn’t make it through an entire stage without learning how to play the game all over again to adjust to the handicaps I was now faced with, and with aiming and dispatching enemies being increasingly difficult, I found myself not running-and-gunning through the whole level, but rather running and hoping to dodge enough enemies to survive to the next health pack before dying. Bosses are nigh impossible under these situations and it’s only by sheer dumb luck that I managed to hit and destroy Ice Man before he could nuke me. 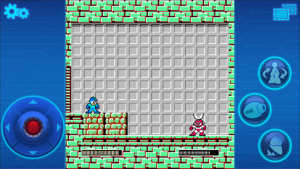 I couldn’t believe that this was what my childhood was reduced to, so I, of course, downloaded 2 different entries in the series to see how they fared and found that I faced the exact same problems in Mega Man 2 and 4 that I faced in the original. It’s at this point that I should mention that these games are not bundled in any way. Each Mega Man game is its own app, and each one costs around $2. There are 6 main series games here, so that would be $12 for the complete set of practically unplayable games. It’s for reasons like this that the refund window on Google Play exists.

On thing this game has going for it is that it stays true to the original Nintendo sprites. Mega Man, boss portraits, everything retains its original sprite look. Your control pad on the left side of the screen looks like Mega Man’s Mega Buster (his arm gun), while the right side buttons show pictures of shooting and jumping to correspond to those actions. There’s also a fast swap button to switch weapons without opening a menu. The sounds are very similar to how they were in their original release, but I have noticed a few skips in the music. I have heard that the music is off-beat, off-pitch, and skips horrible depending on which device you are playing on, so your mileage may vary. 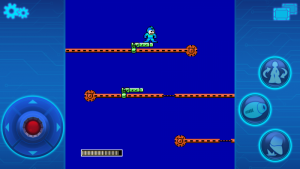 The controls themselves are decent. When I push right, Mega Man moves right. Jump button makes his jump. The animations do stutter, but the controls themselves do not seem to be the problem here. My biggest gripe about the controls is the “Switch Weapons” button I mentioned before. The weapons scroll through in an arbitrary order, and unless you know that order, you’ll spend too much time hitting the button until you see the right one come up. It takes too long and it’s much easier to just hit the menu button right next to it and pick the actual power you want than to hit the switch button 8 times, then another 16 times because you accidentally went past the one you wanted. Part of that is user error I know, but in the heat of battle, switching weapons on the fly is extremely useful and this system just isn’t efficient enough to be useful. If there was an additional switch button to scroll backward through the list, this would help alleviate the problem a bit (and I would accept full responsibility for being a moron). 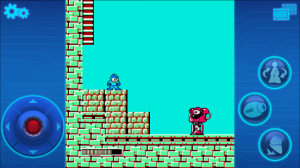 Soon to be dead.

The best thing to come from this atrocity is the inclusion of a Boss Rush mode. You get placed in a room with a random boss. You have all powers, but your life and weapon ammo are limited to whatever pickups happen to drop when you kill a boss. It’s a cool feature, but shoddy framerates make boss fights extremely difficult when they weren’t always a walk in the park to begin with. Still, this game mode was the polish on the turd. The framerate issues were still heavily present, but I still managed to make it through 3 rounds of all six bosses before finally not having enough weapon energy left to take them down. If the game ran smoothly, I could probably pull out another round or two, but without the leg up of having super effective weapons, the bosses are just too deadly. I don’t want to sound like a broken record, and at this point you may be thinking “I get it, framerate is an issue”, but the fact of the matter is that it’s such a big issue here to the performance that the entire game is almost impossible to play. This game will only last you as long as you have patience to keep playing it, which hopefully is still within the before mentioned refund window, because with so many other ways to play these classic games (still on the go if you have a Nintendo 3DS), the mobile versions are not worth even $2.

Something somewhere went wrong. These games are debilitating framerate issues which prevent you from playing the game properly. You may make it through a level after repeated, repeated attempts, but it won’t be fun. The magic of the old games is gone and is replaced with unfair deaths caused by choppy gameplay and cheap hits. Save your money and buy a digital copy somewhere else if you want to play these classics again. You’ll thank me later.