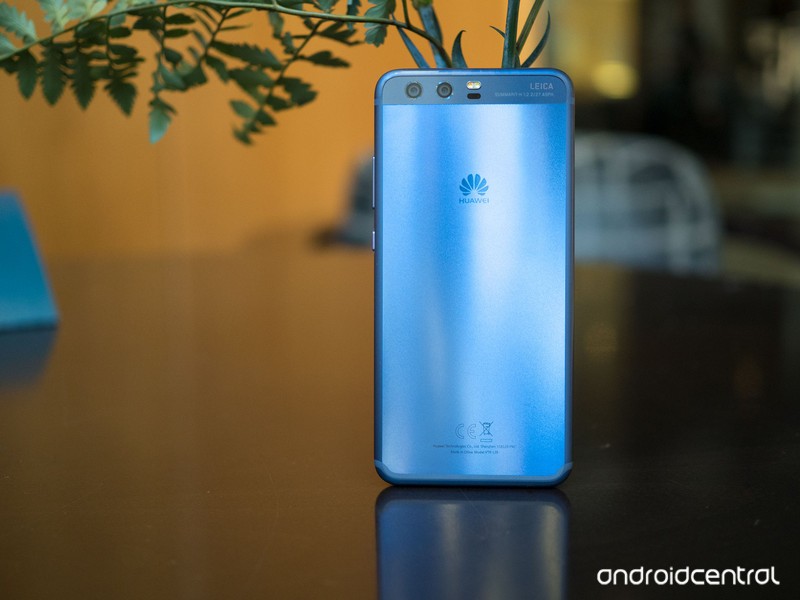 Huawei’s mainstream flagshi for 2017 builds on the solid foundations of the Mate 9 with upgraded cameras, a slim form factor and AI-powered performance — in two sizes.

Huawei’s steady improvement throughout 2016 culminated in the Mate 9, a phone which remains our pick for the best big Android phone. Now, a little earlier in the year than usual, it’s time for a new mainstream flagship from the Chinese firm.

At a technical level, the Huawei P10 takes the core technology of the Mate 9 and shrinks it down to a size that’s more manageable, and more attractive to the normal phone-buying public. The new Kirin 960 processor and second-gen Leica camera array now live in a phone more suited to one-handed use; the 5.1-inch display of the smaller P10 lives in a device with around the same footprint of the iPhone 7 (itself a 4.7-inch display). And the screen itself — an IPS-LCD panel at 1080p — looks fantastic, though we haven’t yet had the chance to use it outdoors.

On the outside, a very different design language can be seen. While it’s hard to deny that Huawei’s new flagships have been influenced by Apple — see the characteristic shape of the antenna lines, for instance — the P10 also represents an evolution of the P9’s look and feel. The side walls have soft curves, but without feeling especially slippery. And the camera window up top, which sits flush with the metal body, is a very Huawei design trait.

Huawei’s also gone a little wild with color options. At a meeting ahead of the phone’s unveiling at MWC 2017, Huawei VP of design Soonsuh Kim told us that color was a big priority in bringing the P10 to life. The P9 shipped with a relatively restrained palette and added more hues after release, the P10 has eight at launch, from the usual black, white/silver and rose gold offerings to new “dazzling” blue and “greenery” options, with their own “hyper diamond cut” finish. Unlike the standard “sandblasted” matte textures, Huawei’s new finishing process produces a unique high-gloss coating that complements its eye-catching new colors. And the company says its glossy finish is less of a fingerprint magnet than glass-based rivals — a claim we’ll have to test when we’ve had more time with it.

For a 5.1-incher, the Huawei P10 feels incredibly compact, with extremely minimal side bezels and a profile that brings back memories of the still-great Honor 8. Subtle visual flourishes like the orange trim around the power key — a holdover from the Huawei Nova and P9 Plus — are welcome additions too. Besides that, there’s very little visual cruft going on. (In stark contrast to Huawei’s new smartwatches.)

In an effort to simplify the design, and make fingerprint security more usable in a smaller handset, the P10’s scanner has been relocated around the front, keeping the back panel free of unnecessary protrusions. The fingerprint scanner takes the place of the front-facing Huawei branding seen in earlier models, a move which isn’t entirely accidental. One Huawei representative told me that in some cases, customers would prejudge a phone bearing a name they didn’t recognize, and so a more spartan front face would encourage prospective buyers to actually use the phone before coming to any conclusions.

Regardless, the P10’s fingerprint scanner, which doubles as a capacitive key, is something of a mixed bag. It pulls triple duty as a home, back and task-switching key — single tap for “back,” double-tap for “home,” swipe for recent apps — which at least initially is a jarring transition. I’ve not had enough time with the P10 to form a full opinion on this set up, and we’ll definitely be checking back when we get the chance to give the phone a more thorough review.

If you decide that this new button setup isn’t for you, you can instead enable the standard on-screen keys. Ideally, though, we’d have much preferred a pair of capacitive keys flanking the new home button, like the Mate 9 Pro and Mate 9 Porsche Design. If you’re going to put a home button on the front of the phone, go ahead and add on the capacitive back and multitasking keys while you’re at it.

You also lose the handy swipe shortcuts on the home button to pull down the notification shade; I’ve enjoyed this on other Huawei phones, but it’s less of an inconvenience on a smaller phone like this. As for the sensor itself, Huawei claims it’s the “fastest and most reliable in the industry,” and in my brief time with the P10 ahead of launch I can confirm it’s pretty damn fast. Huawei’s EMUI 5.1 software — still based on Android 7.0 Nougat — doesn’t make any major visual changes, but there are a bunch of important under-the-hood improvements. App optimization based on machine learning — first introduced on the Mate 9 — has been augmented further, with behavior-based memory compression. On the P10, EMUI’s machine learning sniffs out which apps are more demanding in terms of performance, and allows less performance-intensive ones to be compressed in memory. It’s this, Huawei says, that lets the P10 get the most out of its 4 gigabytes of RAM.

Touch responsiveness has been tuned up too, the company says, including predictive finger tracking to allow the touch driver to anticipate the direction and location of swipes and taps.

Huawei has also dug deep into Android’s Linux kernel, optimizing garbage collection in the new version of EMUI and making other memory-centric tweaks. As a result, apps can load up to 30 percent quicker than before. It’s hard to nail down any major performance differences between the Mate 9 (on EMUI 5) and a freshly unboxed P10 on 5.1 — both are fast already. But these latest improvements suggest Huawei isn’t resting on its laurels.

That’s all behind-the-scenes stuff. Major user-facing changes in EMUI 5.1 include a bunch of new themes, tied to each of the new Huawei P10 colors. And Huawei has partnered with GoPro to introduce automatic highlight reels in the stock Gallery app. This feature is largely identical to the kind of thing HTC and others have been doing for years, with the ability to tweak the length and style of clips, automatically match transitions to the beat of the music and then drill down for more granular control of your clips. Nevertheless, it’s a neat feature, and yet another strategic partnership for Huawei.

Note: Huawei tells us the Mate 9 and other devices, including the Nova series, will be updated to EMUI 5.1, but there’s no timeframe for release just yet. The regular P10 gets a camera comparable to the Mate 9. The beefier P10 Plus boasts superior optics.

As for the photos you’ll be shooting, the P10 packs the “Leica Dual Camera 2.0” setup, identical on paper to that of the Mate 9 — dual sensors at 12 megapixels (color, with optical image stabilization) and 20 megapixels (monochrome), behind f/2.2 lenses. It’s a proven setup, though as seen on the Mate 9, not quite as good as the very best out there.

For the P10, though, much of the focus is on portrait and selfie photography. A new dedicated portrait mode can dynamically adjust lighting in scenes, making use of what it knows about the structure of your face, based on data from the dual camera setup. A lot of this stuff will sound familiar to iPhone 7 Plus owners, and while Apple’s approach works very differently in terms of the optics, Huawei appears to be promising similar results. For that reason, it’ll be interesting to dig deeper into the P10’s portrait features.

The other side of that coin is the P10’s improved selfie camera, which puts an 8-megapixel sensor behind an f/1.9 lens. To boot, it’s also the first front-facing camera to bear Leica branding (and software tuning). While there’s only a single sensor and lens there, the brighter aperture and respectable resolution should allow for a significant improvement in selfies.

As was the case with last year’s P9 Plus, the Huawei P10 Plus delivers a larger screen (and this time, an upgraded Quad HD resolution) and battery in a device of much the same shape and design as the regular P10. Alongside the fact that it’s bigger and (likely) longer-lasting, with a 3,750mAh battery compared to the P10’s 3,200, the P10 Plus brings some important camera improvements.

The “Leica Camera 2.0 Pro Edition” setup comes with a significantly brighter f/1.8 lens, which should go some way towards improving low light performance. And that bodes well for tackling one of the main weaknesses of the older f/2.2 setup, arguably making the P10 Plus the more interesting of the two. Other enhancements include a step up to 6GB of RAM and 128GB of storage, putting the P10 Plus in line with the chunkier Mate 9 Pro.

The Huawei P10 won’t be sold in the United States, however a Huawei executive confirmed to Android Central that the phone will be ranged by all four UK carriers — Vodafone, O2, EE and Three, as well as Carphone Warehouse.

Read more from News
← Nokia is back with three new Android phones, launching globally!
Balance, simplicity and a tall screen: How the LG G6 was made →