If you’ve seen those videos with fascinating ink-like fluid spiraling into thorns and prickling patterns, you’ve seen ferrofluid. But what exactly is this stuff, and why does it act that way? Is it really some type of liquid magnet? Perhaps more importantly, can you get some? Let’s dive in!

The typical ferrofluid you see in viral videos is made by mixing a bunch of very, very small bits of iron oxide with oil, and usually some kind of surfactant to prevent the pieces from clogging together. The most common kind of iron oxide used in ferrofluid is known as magnetite, because — you guessed it — it’s a ferromagnetic material that’s not only attracted to magnets, but that can also be magnetized and turned into a permanent magnet itself. Ferrofluid is basically little bits of this stuff suspended in goo; that’s the easy answer.

More: Channel your inner Magneto with these 7 captivating ferrofluid gadgets

The more complicated explanation is all about nanoparticles. Back in the 1960s, experiments in chemistry showed that ferrofluids could be created and stabilized — a discovery actually made by NASA while searching for ways to control liquid fuel in the weightlessness of space. 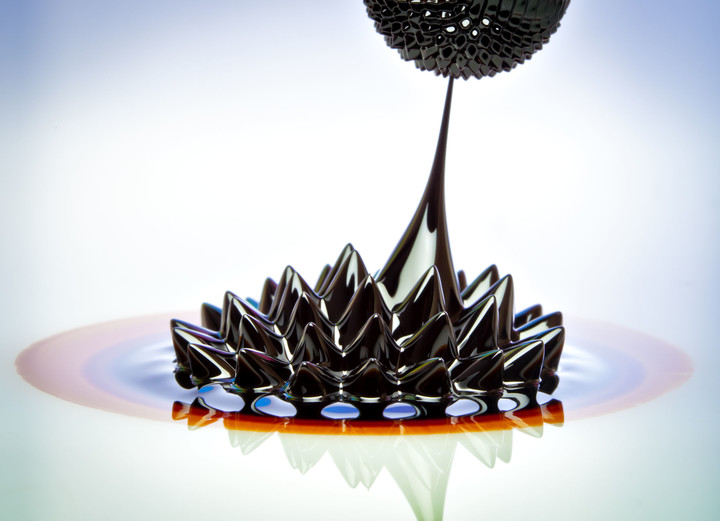 Improved techniques eventually yielded easy ways to splice iron oxide into nanoparticles around 10 nanometers wide. That’s so small that these particles rarely even settle to the bottom of the fluid — they just stay suspended, floating around. They are even subject to good old Brownian motion, which keeps the ferrofluid evenly distributed and slick for long periods of time.

Okay, but how does the ferrofluid magically transform into spikes and those crazy hedgehog shapes?

Think of it as a very careful chemical balancing act involving many different forces all hitting a sweet spot. Imagine that you apply a magnetic force to a ferrofluid, say, through a permanent magnet you have lying around. Here are several of the key interactions that happen:

The magnetite acts as magnetite does and is attracted/repelled based on the magnetic field – all those little nanoparticles respond to the force and start moving.
The surfactant (the same kind of chemical used in detergent to remove stains) remains ultra-slippery and refuses to let the nanoparticles attach to each other. They keep slipping away while they move, forming quick bonds with the surfactant instead to become a special type of ligand, or a coordinate bond with a metal atom.
At the same time, the surface of the ferrofluid experiences a lot of surface tension, which allows the fluid to maintain shapes for longer periods of time when it is drawn out.
Meanwhile, Van der Waals forces are having a similar effect on the molecules within the mixture, allowing them to maintain a surprising amount of cohesion as the ferrofluid moves.
On top of it all, as the ferrofluid is being pulled by the magnetic force, the heaviest parts are also being dragged back down by gravity at the same time.

Add it all together, and what do you get? A dazzling display of spikes, rivulets, and magical behavior. Additionally, the fluid is what is known as “superparamagnetic” which means that, unlike normal magnetite, it loses its charge every time and collapses back into a fluid, unable to hold a permanent, magnetically stabilized form. 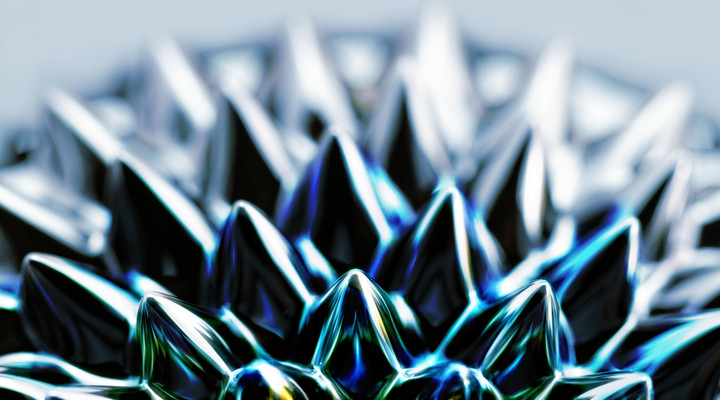 Note that this mixture of reactions doesn’t happen with all ferrofluids, all the time. The ferrofluid demonstrations you see online or in a lab are made with particular ferrofluids that are known for having that kind of effect. Other ferrofluids can behave in different ways, although none are quite as visually striking.

Remember, ferrofluids weren’t originally designed for fun: They can be created from iron, cobalt, nickel, and a variety of different oils and surfactants, giving them a variety of applications in the industrial world. The most important is probably their use in semiconductor manufacturing, where the fluid is used to seal powerful hydraulic machinery and other components to increase power while preventing contamination.

For an example a little closer to home, consider large, fancy speakers. Sometimes these loudspeakers use a magnet surrounded by ferrofluid: This keeps the magnet cool and helps prevent unwanted vibrations. Likewise, customized SATA hard drives sometimes use ferrofluids for similar reasons.

In the future, scientists hope to successfully use ferrofluid as a transmitting material for chemical treatments in healthcare – for example, allowing doctors to control exactly where a drug is focused in the body.

One of the useful things about ferrofluids (unlike other showy pieces of science) is that you can easily locate safe versions, which makes them great for showing off in the classroom or at home. Yes, you can absolutely buy your own ferrofluids, and you even have a couple different options:

Creating your own ferrofluid

If you’re more of a DIY-minded person, you can even create your own ferrofluids, although it’s significantly more dangerous than just buying a bottle. However, some hobbyists do create ferrofluid as a powerful acidic reagent, or even use it to make their own art. Just be prepared to use some tricky chemicals like ferric chloride and ammonia, as well as the necessary equipment to boil it (and all the risks that entails). A lab is often the best location for a project like this, and if you find the right class you may even be able to create it as part of a project.

Read more from News
← Deck your phone out for your Oscars Party with these award-worthy wallpapers!
The FCC just rolled back some of its privacy rules, reversing previous positions →