I have to confess, this is more or less my first experience with a LeEco device – I hadn’t even heard of the company prior to opening the package.

Imagine my surprise when I cut the tape, lifted the lid, and saw this beast: 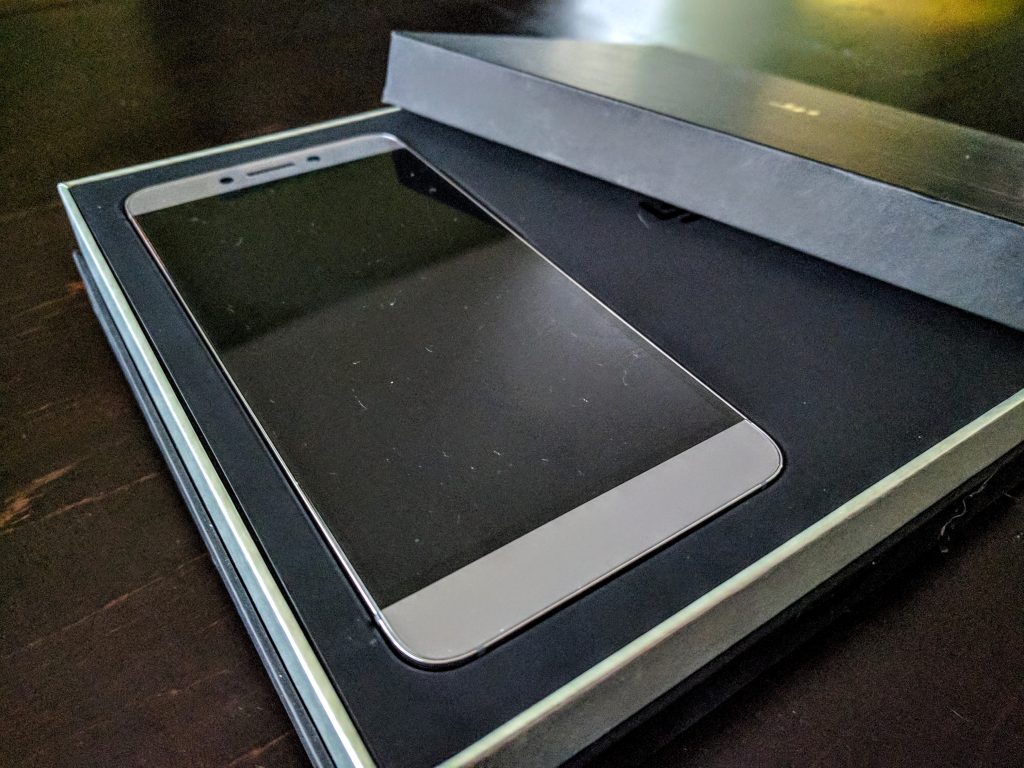 In fact, my first words to Matty when I opened the thing up were “Whoa. It’s sexy.”

But, as usual, I digress – with more pictures than usual. What follows is my genuine and generally-uncensored (sorry, mom), impressions of LeEco’s Le S3.

The box looks weathered….it’s really just beat up from being in the mail. Thanks UPS.

The buttons are crisp and feel great.

That aluminum frame tho.

Close-up of the fingerprint scanner and camera.

Check out that tiny bezel!

Appearance-wise, the LeS3 reminds me of the bastard child of a Pixel and an iPhone 7. It inherits the Type-C USB port, softkeys, rear-fingerprint reader, and Android OS from the former, but the massive vertical bezel, stereo speakers on the bottom, absent 3.5mm jack, and UI-styling of the latter. It’s a bit of a conundrum when it comes to built quality. The aluminum frame, prominent buttons, notably-absent horizontal bezel and subtly concealed softkeys (built into the lower bezel) all give the impression of solid, premium build…

Tangent alert: Okay. Look. I love the softkeys. They’re great. They have little subtle vibrations, nice soft lighting, and they’re pretty responsive. But what the hell, LeEco. You switched the Back key and the Recents key. Just look:

…But even after a week’s use as my daily driver, I still feel like I’m gonna break the thing. While this may be a purely psychological reaction rooted in the fact that I 1) broke a Nexus 6P recently, and 2) always keep my phone snugly wrapped in a Spigen case, or perhaps because it weighs only 153 grams (for comparison, my Nexus 6P weighs almost an ounce more, at 178g). However, my madness does have some method to back it up, as I’ve noticed that in the short time I’ve had it, random scratches have been showing up on the screen – something that never happens to my Nexus 6P.

“But Donovan!” Some of you may decry, “You’re supposed to use a screen protector, you big dummy!” And while that may be true, I never have on my 6P (perhaps the reason I broke it) and never will. So there. Point is, for a phone that advertises Gorilla Glass 3, it sure does scratch easily.

Tl;dr: Feels great in the hand. Looks sexy. Nice blend of iPhone and Pixel styling. May or may not be fragile af, depending on your level of trust in Donovan’s psyche.

Despite the aforementioned scratch-happy glass, the Le S3’s IPS LCD display is impressive for a $250 phone. The display isn’t AMOLED, but it’s a crisp 1080p – more than adequate on a 5.5″ screen, despite what display snobs will insist – and the colors are vibrant. Interestingly – and impressively – EUI has a display tweak built into it that allows you to adjust the hue and saturation of the display based in your taste, including a Night Mode that reduces the strain on your eyes.

My only real gripe with the display could also be a build-related one; the lack of a side bezel means that touching the side edges of the screen is inevitable, occasionally resulting in unintentional screen taps.

While the Le S3 will never be confused for a powerhouse, it’s more than adequate for most users and for most games. Its Snapdragon 652 and 3GB RAM ensure that the experience is rarely sluggish – though I did notice that, on rare occasion, there was a slight input delay, most often in the stock keyboard. I suspect this may be a software issue, rather than any problem with the hardware. My only real beef with the specs here is that, while it comes stock with 32gb of internal storage, there’s no MicroSD slot. Sad day.

I tested the Le S3 using Antutu – which while imperfect, as all benchmarks are, establishes a numerical value of the phone’s 3D graphics capabilities. The Le S3’s Antutu Benchmark came out to 83333 – roughly the equivalent of an Huawei Honor 8, which is solid. I also measured the Le S3’s performance using 3DMark, with a result of 879 – a little better than the new Samsung Galaxy A9, and a little worse than the Huawei Honor 8. Not bad at all, given the $250 – $200 on a good day – price tag.

Tl;dr: Damned fine performance for a budget phone. Blows the Moto G4 out of the water.

For a budget phone, the Le S3 has a surprising number of number of modern features. Usually, in an effort to keep the cost of manufacturing low, companies will use lower end or older generation components – not so, in this case. The Le S3 comes stock with a Type-C USB port, back-mounted fingerprint sensor, Dolby Atmos sound, an IR blaster (!), Bluetooth 4.1, WiFi using the modern 802.11ac standard, and dual SIM slots. All of these are amenities you’d expect to find on a flagship phone, not a little budget badass (to wit, the Moto G4 doesn’t have a single one of those features – at least, not in those versions). Most of these components are pretty standard so I won’t waste your time going through them one-by-one, but here are a few thoughts and/or observations on a couple.

Tl;dr: Premium features in a cheap frame. IR blaster is a unique touch.

After using the Le S3 as my daily driver for a week, I can say I’ve been really impressed with the battery life. Even with the notoriously power-hungry Facebook app sapping battery in the background, the Le S3 routinely lasted a day and matched my Nexus 6P. Granted, this was probably helped by the fact that the Le S3 runs a lower-powered Snapdragon model and runs a smaller, less dense screen, but even still. Any phone I can get a day out of without having to stop and recharge is a mark in the Win column in my book.

On paper, the Le S3 has a solid camera set up – a 16mp back shooter and an 8mp selfie cam. But I’m gonna be frank here; I was disappointed. This shouldn’t be surprising given the price of the phone, but the rest of the phone’s performance had been such a pleasant surprise up to that point that I dared to hope. Unfortunately, those hopes came crashing back to earth as reality set in – the camera is not great. Here are a couple samples – starring Dexter the Kitten – that showcase the mediocrity of it.

Storming, for once, in sunny California.

And a painting, for good measure.

In fairness, the camera app included in EUI is relatively robust, with plenty of options, including Slow-Motion, Panoramic, a wide variety of built-in filters, HDR, timer, and even white balance. It should be noted that for the same price as this phone, though, the Honor 6X includes a dual lens setup similar to the iPhone 7, which should be more common in the future – meanwhile the Le S3 is still rocking a boring single lens.

Like the Le S3’s hardware, and like so many Chinese manufacturers, EUI has attempted to take Google’s OS and throw in some Apple flavor. EUI’s default launcher is distinctly iOS-like, with no app drawer to speak of. EUI runs on Android 6.0, which while not bad, is definitely a version behind. It runs like a blend of iOS’s launcher and the Google Now Launcher, with some of LeEco’s own apps thrown in for good measure. 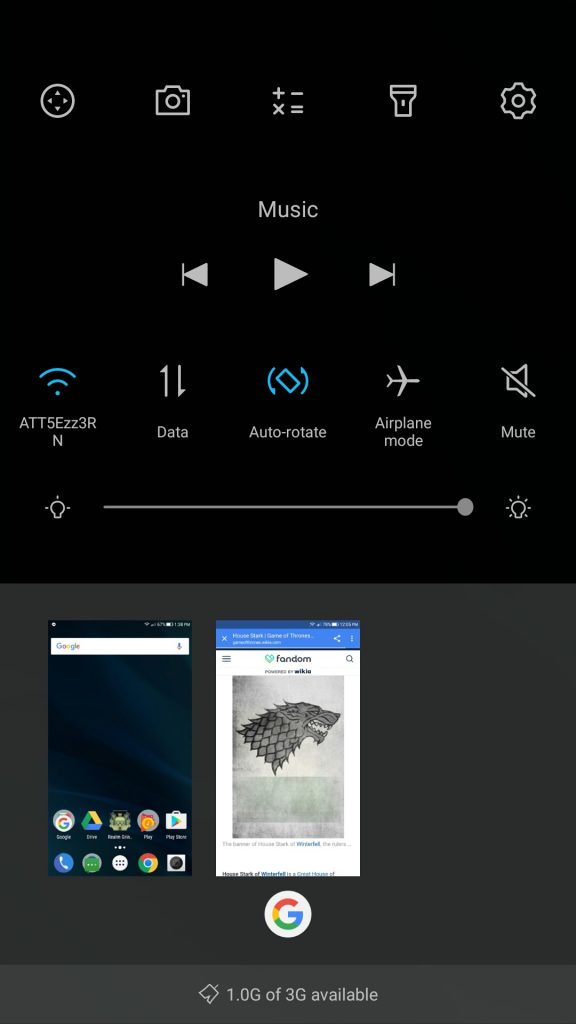 The Recents screen is perhaps the most interesting part of the UI, combining the Quick Settings normally located in the Notification Shade of Android with the Recently used apps page. This makes most of the Quick Settings available with a single touch, and better uses the screen real estate when viewing the recent apps. Really clever stuff.

There are a few pieces of bloat on the phone: many of the standard apps, including Email and Messaging, are all EUI instead of Google, for example. In addition, LeEco has taken it upon itself to use a self-branded replacement for Google Now – it’s even one swipe away on the home screen – called LeView, which compiles interesting headlines for your consumption. Among the other bloatware apps are Live (a sort of video curation service that permanently sits in the default launcher’s dock), LeVidi, My LeEco (to manage your LeEco account), LE, Compass, and the IR App – honestly not bad, as far as bloatware goes. At least the Yahoo app it comes pre-installed with can be removed with no trouble.

Tl;dr: iOS meets Android 6.0 with a bit of bloatware and a fancy Recents screen.

At $250 ($200 on a good day), the LeS3 is a similar value to that of the Honor 6X – though the 6X is definitely a stronger phone, specification-wise. It blows the Moto G4 Plus right out of the water.

Read more from News
← Facebook and Netflix binges sucking up your life? Xooloo to the rescue
‘Splatoon 2’ preview arrives on Nintendo Switch in March →