Can’t be with your sweetie on Valentine’s Day? These apps can help you make long-distance whoopie! 🍆 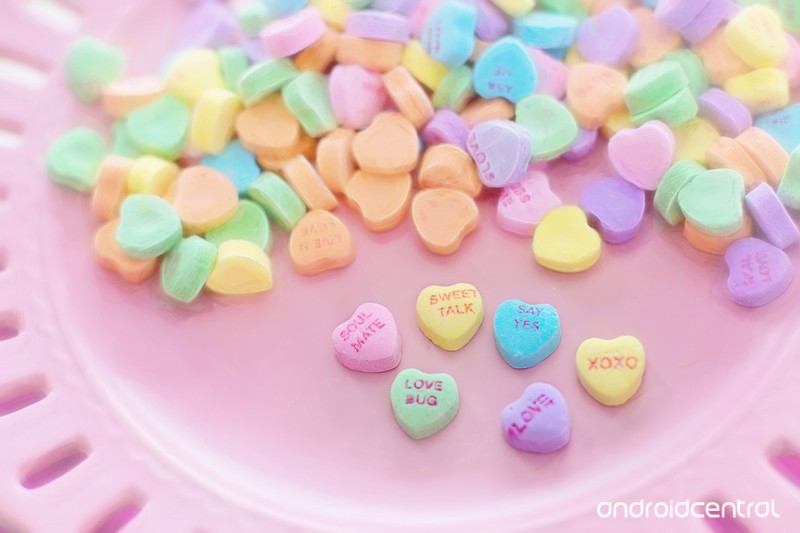 The next best thing to being in there.

Nothing is better than spending Valentine’s Day with the one you love. It’s a day like any other day, but it’s also been traditionally set aside for couples to do those things couples like to do with each other. But life being what it is, sometimes it’s impossible to be with each other and make some private fireworks.

We’re not saying even the best app can be a substitute, but using your phone as a tool for a little long-distance fooling around with your special someone has to be one of the best things you can do with it.

Get chatty but keep it private

We imagine the first message ever sent from one phone to another was some sort of test. And the second was probably a little naughty.

Chatting with your boo is fun. Something about typing the words or reading them can seem a little more risqué than whispering them into each other’s ear, and there is no shortage of apps designed to do nothing more than chat with someone else, complete with pictures and video and everything short of actually dialing a number and talking.

But you need to play it safe. Make sure the private conversations you have with the people special to you stay private! There are plenty of choices here, too. Apps like Facebook Messenger or WhatsApp offer extra security with encryption, as does Google’s Allo Messenger and BlackBerry Messenger. That means the only person who will be able to see anything you send is the person holding the phone you’re sending it too. Unless they want to share it. #NotJudging 🍆

If you want to go the extra mile, we recommend Signal as the best app that offers encrypted messaging. Check out what we have to say about Signal and other secure ways to stay in touch at the link below.

More: Privacy matters more now than ever — these apps will help

Keep your eyes on the prize

We’re visual creatures. We can learn better when we see an example, we learn to recognize faces long before we understand any of the sounds around us and the things we see can stimulate us in all sorts of ways. So there is a lot of fun to be had if you both have a space where you can turn on the cameras and make a little eye contact. Luckily, there are all kinds of ways your phone can connect and share video in real time. You might already have one installed that you use and like. But if not, we’ve got you covered.

We have to start with Google Duo. Not because we’re an Android blog and all about everything Google, but because it has outstanding video quality. It’s a simple app with none of the extra features you might find in other video calling software. You can call anyone in your address book with Duo installed (you can invite someone right through the Duo app) with a simple tap. The app does the rest and the whole conversation, both audio and video, are end-to-end encrypted to keep everything between the two of you.

Things change a bit if you have a tablet or a computer at hand. You’re now in big screen territory and an app like Skype or Hangouts is the way to make video calls unless you’re a full-on Apple couple. And in that case, you FaceTime each other until you need to come up for air.

Both Skype and Hangouts offer full-screen video with audio on a Windows or Apple computer. But if only one you has one, Hangouts is your friend. There’s a dedicated Android app that’s feature rich and will work for messaging, texting and video calling and anyone with a Google account can use Hangouts on the web. Skype is available for your Android, too and can also be a great messaging app and can make calls over the internet.

You need to know that neither Skype nor Hangouts offer encrypted conversations in case that’s a problem. And both can get a little invite-spammy so take a good look at who wants to chat before you start clicking things. Unless you’re into bots. Again, #NotJudging 🍆

Snapchat videos or messages don’t offer end-to-end encryption and there is an entire cottage industry built around finding ways to save everything right through the phone. Got it? Great.

That’s kind of a shame because Snapchat can be a pretty good all-in-one way to communicate. You can message anyone with the app and you can make live video calls to anyone with the app. Snapchat also offers what they call a Story, where someone can post a series of pictures or short videos to a timeline for someone else to watch. If you fancy putting on a show, it’s a pretty cool way to do it and that can give you plenty to talk about when the show is over. More than one person can check out a story, so keep that in mind when you’re posting anything in public.

If things are serious enough that you’re ready to share a calendar, Between is something you should take a look at.

It’s a messaging app designed for you and one other person. You are their only contact, and they are yours. The chat background is customizable to the nth degree and there are plenty of stickers, you share a calendar as well as a photo album and you can create a slideshow using the photos.

Between is secure, with all the data shared between phones encrypted from end to end, and anything the app stores on your phone is also encrypted and can’t be found by any other app. It’s also very well laid out and isn’t terrible to use — a tough feat in an app that can do so many very different things.

What do you use to keep in touch with your ❤️? Let us know in the comments!

Read more from News
← Panasonic’s indoor farm, and more in the week that was
Didn’t mean to delete that? Here’s how to recover deleted text messages on your iPhone →