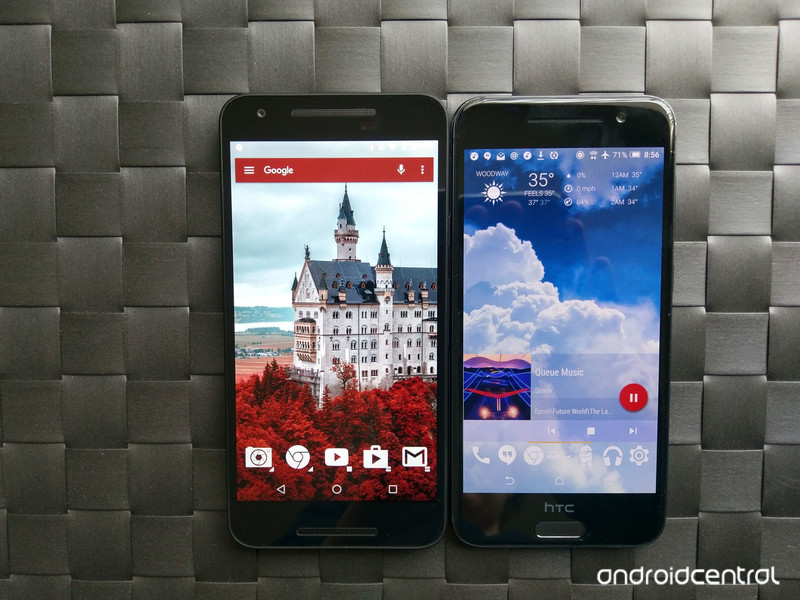 Customization is my favorite part of Android.

Android provides us with so much freedom, allowing us to completely scrap the setup and the launcher that came with our phones and replace it with something that suit us more. Years ago, before I knew what Nova Launcher and icon packs were, I was trying to make my phone look less blockish and boring. Our phones hold our lives — shouldn’t they hold some of our personality and style, too?

Whether you’ve got theming down to an art or you’re just looking for something a little more flexible than your current launcher, these are the best of the best when it comes to theming launchers. They are also two of the best launchers on the market, period.

Here’s why you should have Nova Launcher and Action Launcher in your theming toolkit. 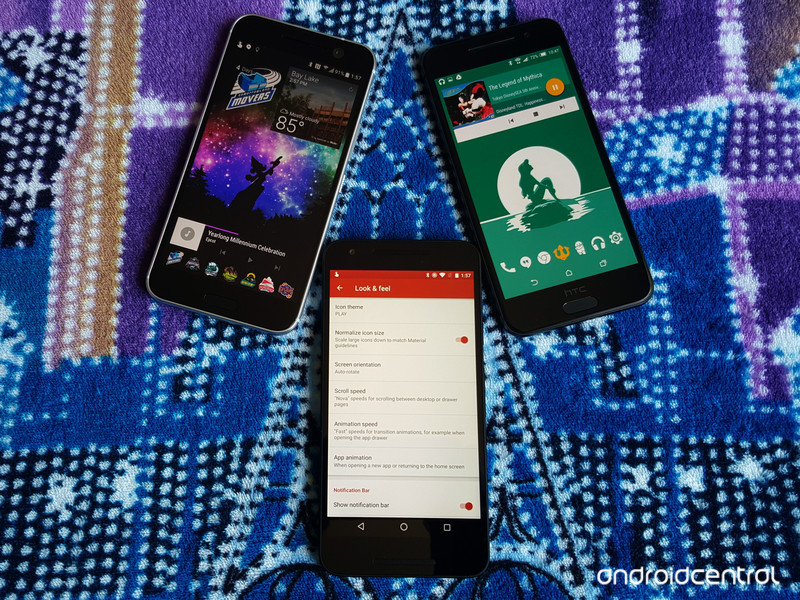 Nova Launcher is one of the few constants in the launcher scene: Nova Launcher just turned five years old, and it has been consistently awesome. Nova Launcher has a small learning curve, but once you learn your way around Nova Settings, the theming world is your oyster, and Nova holds quite a few pearls.

The biggest pearl from a theming standpoint is Subgrid Positioning. This allows users to resize widgets and place icons halfways between traditional grid boxes. So you can resize a widget to be 4×1.5 or even .5x.5 if you want. This increased freedom when placing and sizing widgets is invaluable when it comes to lining up elements in complex themes, or even placing element precisely in relation a detailed wallpaper. 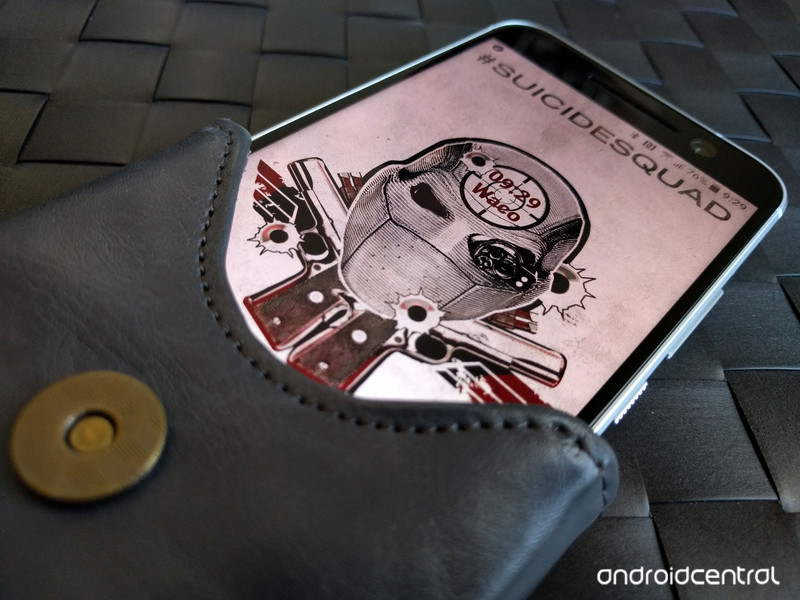 Try doing this in Action Launcher. I dare you.

Another benefit of theming on Nova is the flexibility of backing up and executing themes from Google Drive. The ability to set wallpapers, icons, and restore backups without having to download them locally first is a godsend, especially when you theme on different devices or gather/create your theme elements on desktop computers. 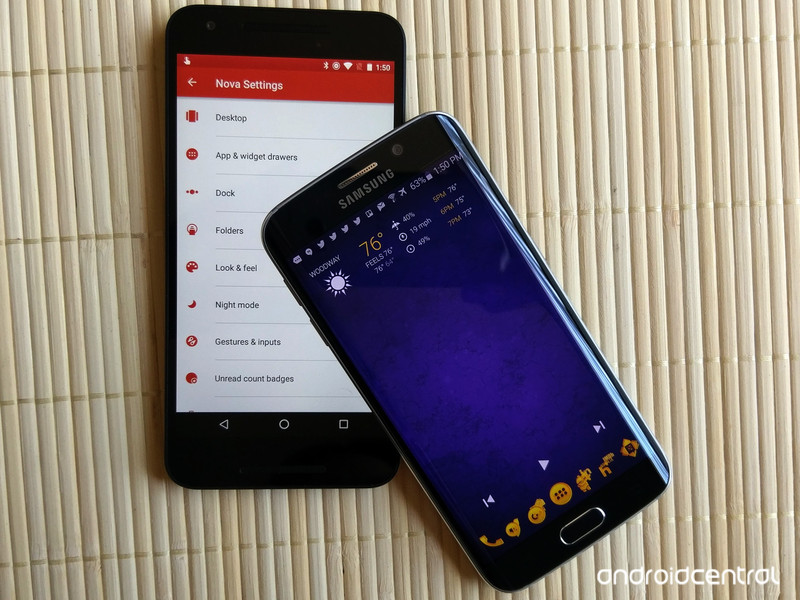 If there’s a downside to Nova Launcher, it’s that while everything is laid out in the settings in a fairly straightforward manner, it still takes time to edit everything individually. Nova Launcher is like a Swiss Army knife: there’s so many attachments you never think you’ll need but if you ever do, all you have to do is pull each one out until you find what you need. 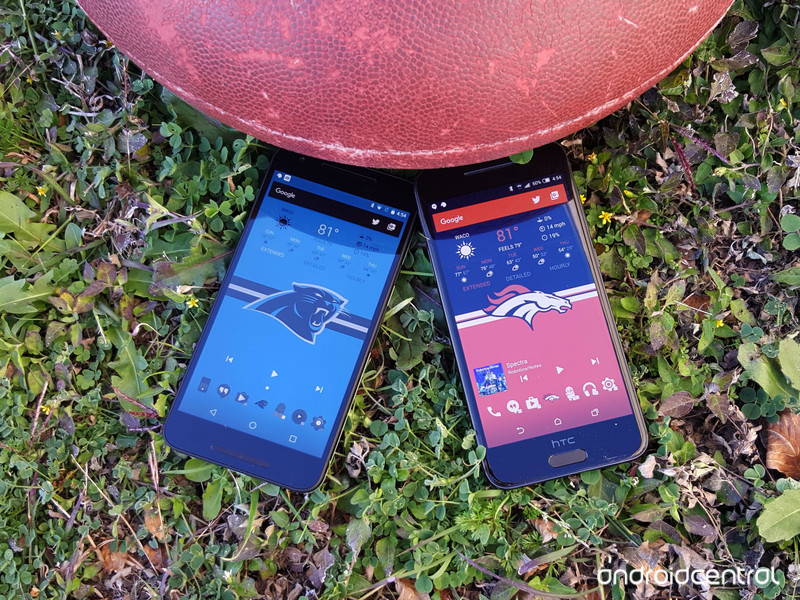 Action Launcher, on the other hand, is more like a switchblade: very quick, very sharp, but without the bottle opener or the nail trimmer. Now, don’t get me wrong, Action Launcher has a lot of features, and a lot of customization, but all of it is geared towards productivity. There’s quite a lot of theming potential, but there are a few things missing that puts our overall favorite launcher behind Nova Launcher in this category.

One of Action Launcher’s most well-known features are their Covers, which allow you to replace a folder icon with the first icon in your folder, and allows you to quickly open that first app with a tap, while opening the folder with a swipe. It’s a nice feature, but I’m sorry to say that from a theming perspective, Nova does it better, albeit clunkier. To activate a Cover on Action Launcher, you simply open the folder, tap the three-dot menu, and tap Make Cover. In order to set a custom folder icon, you must make a folder a Cover, then change the icon of the app that becomes the Cover. 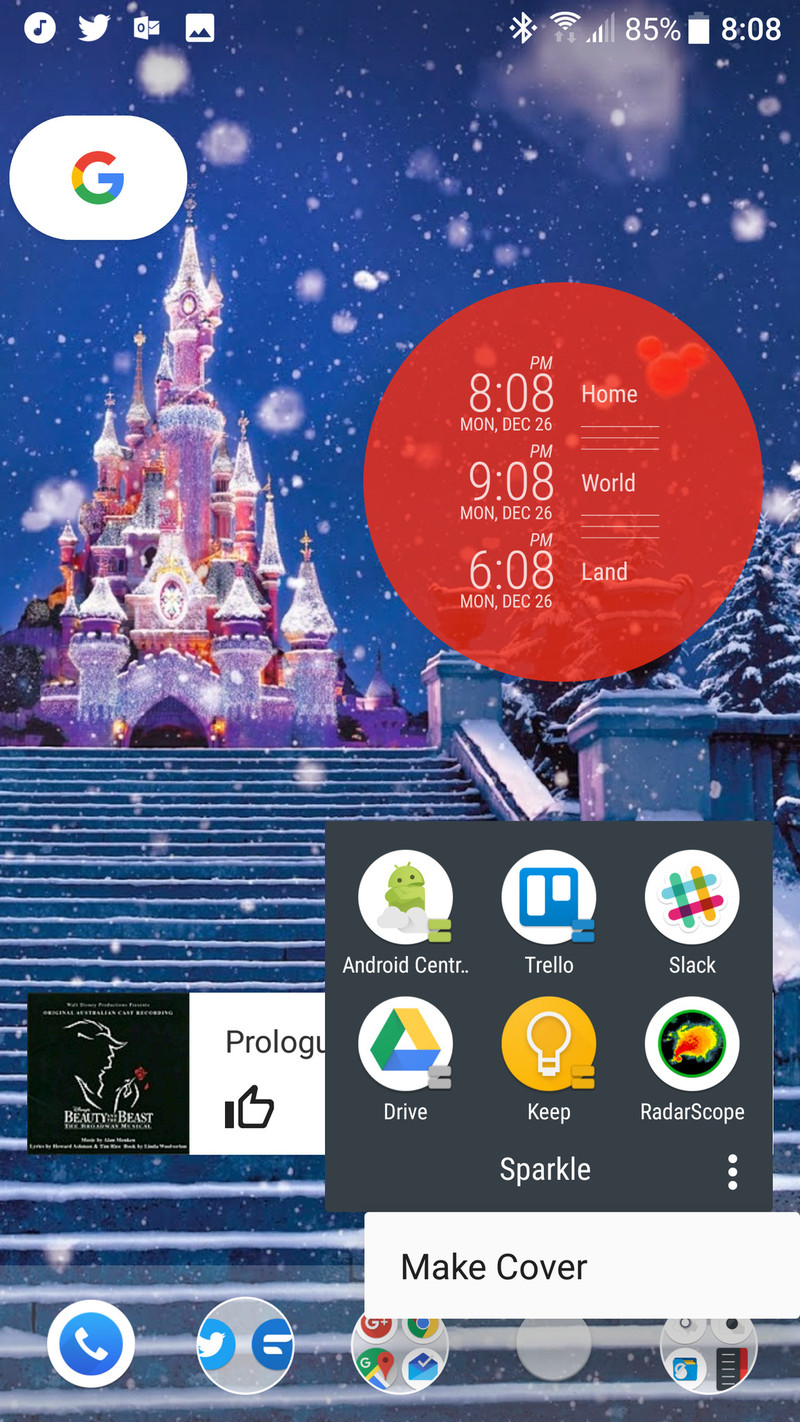 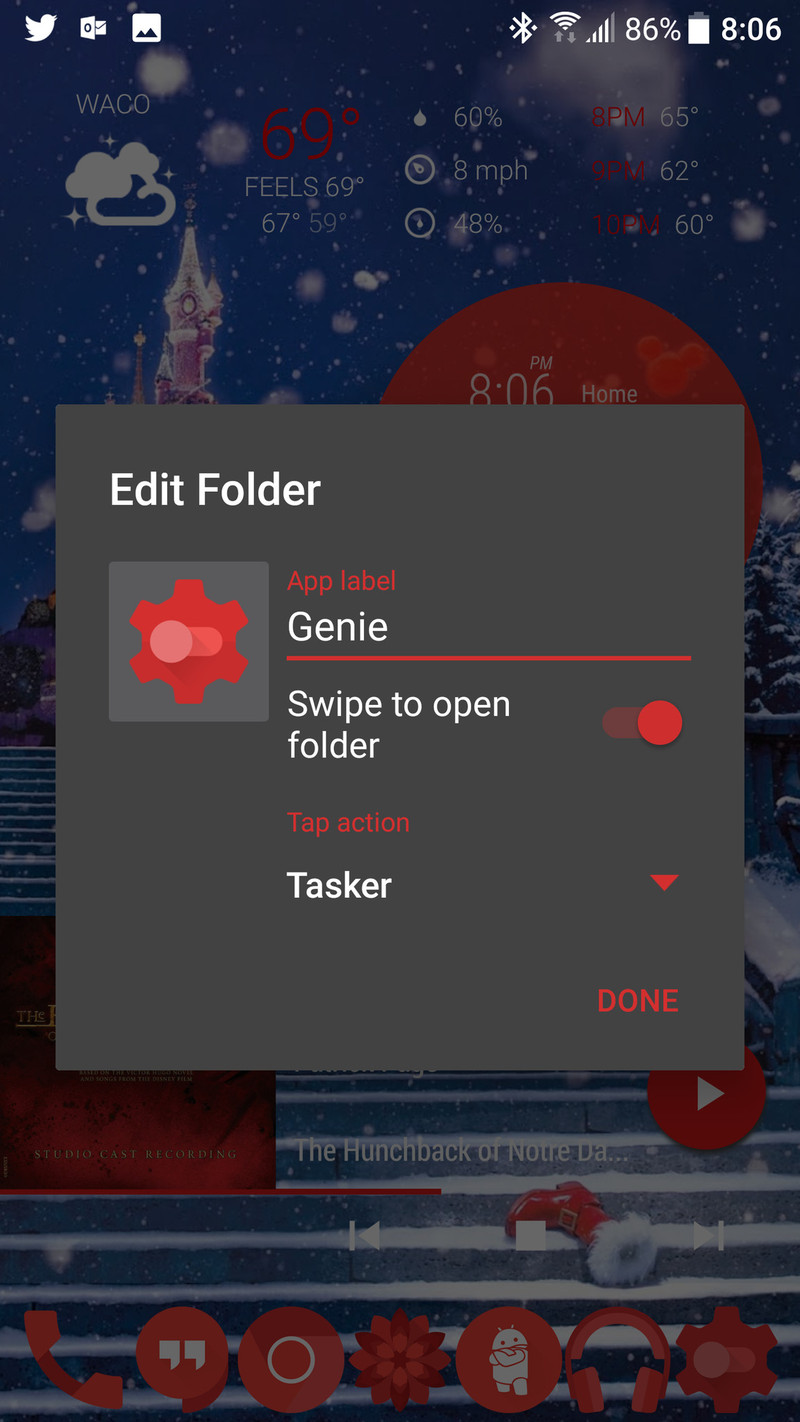 Action Launcher’s Covers are easy, but lack the customization in look and function of Nova Launcher’s folders.

When setting up a Cover on Nova, you long-press a folder, Edit it, then activate Swipe to open folder and set the tap action to the first app in your folder… or any other app or Nova shortcut you want. You can also set a custom folder icon regardless of using a Cover, as folder icons can be edited just like any other shortcut. It’s definitely easier on Action Launcher, but you can do it more ways on Nova, especially in relation to theme-building.

Another feature where Action Launcher opts for a simpler but ultimately less useful implementation is Quicktheme. Quicktheme allows you to quickly set colors that are decided by the colors in your wallpaper, and if Quicktheme pulls the right colors for your wallpaper, it’s great. 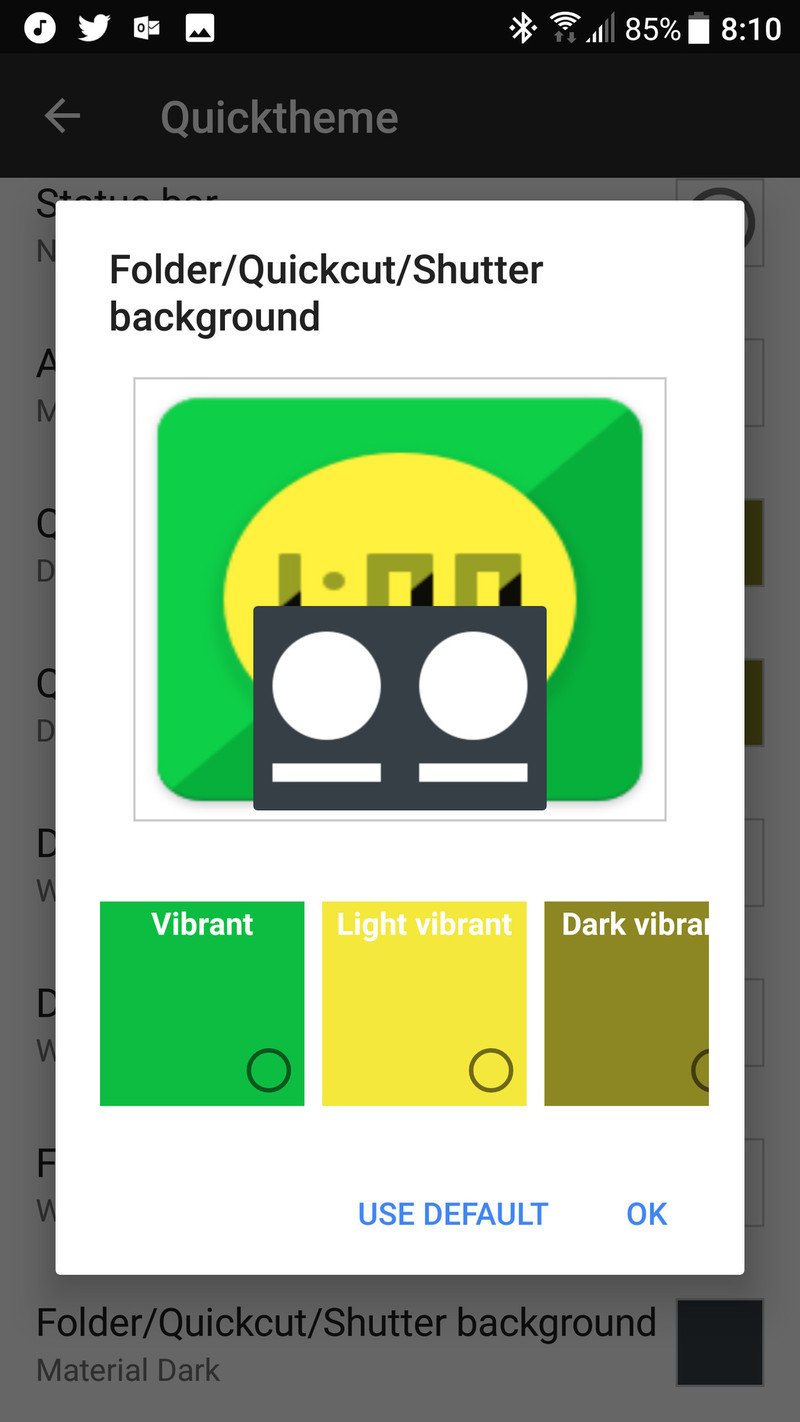 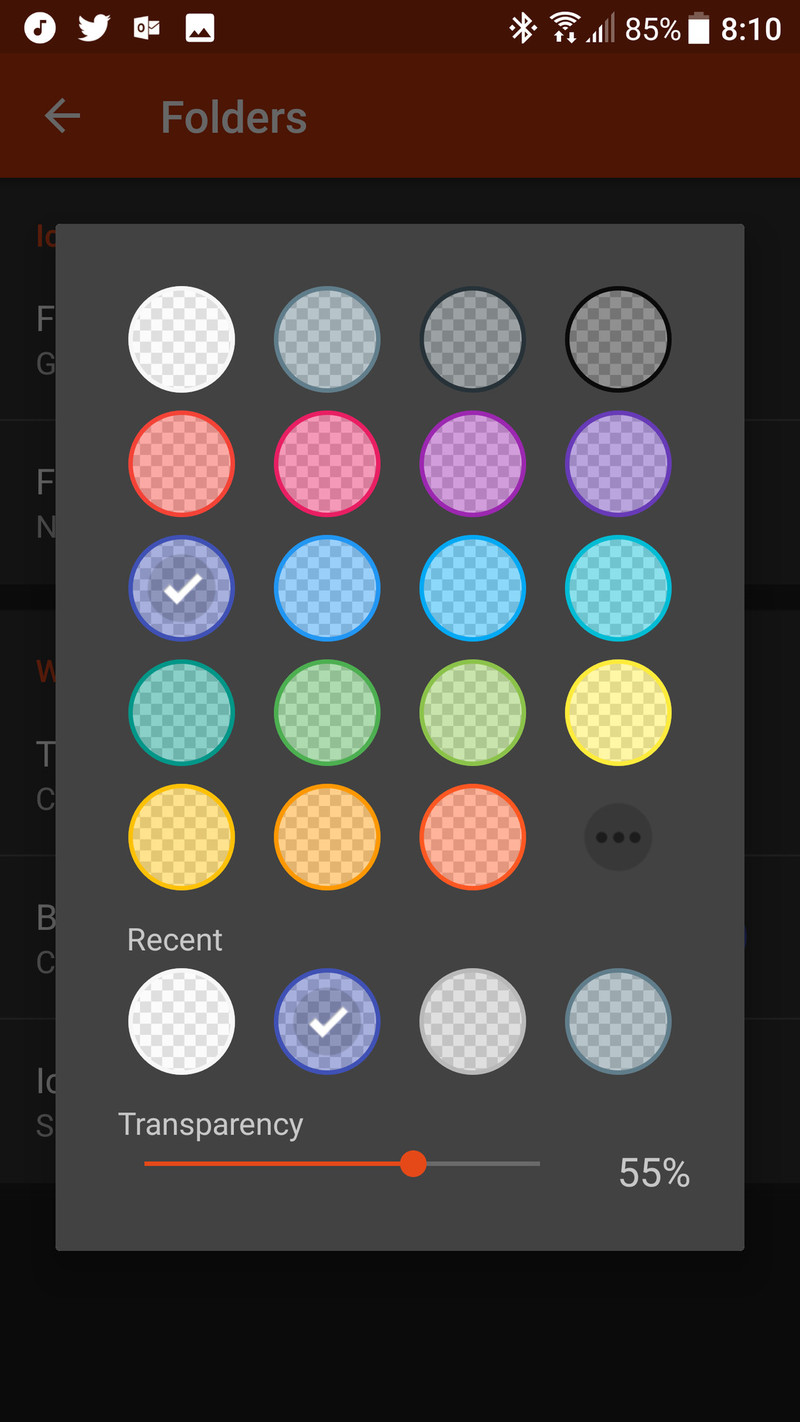 Action Launcher’s Quicktheme misses live wallpapers and many wallpaper colors. Nova lets you pick any color, even if you have to go find the hex code first

The problem is, a lot of times, Quicktheme can miss colors we want to use in our theme (especially accent colors), and you can’t manually pick a color if it gets missed: you have to re-apply your wallpaper and hope that Quicktheme gets it that time. If you’re using a Live Wallpaper like Touch Circle, your chances of getting the right colors are slim to none. It’s wonderful to have all your color options on one page, but I need all colors at my disposal, not six that may or may not match my wallpaper.

I ranted and raved about sub-grid positioning, and that’s missing from Action Launcher. Also missing is the “Padding” and margin options that allow Nova to stretch widgets to the edge of the screen. In Action Launcher, widgets will always have a gap between widgets and the screen, or between other widgets, meaning widgets can be slightly bigger and more-than-slightly cleaner on Nova than they will on Action. Now, all of this is not to say Action Launcher can’t be used for good themes. Action Launcher currently has an excellent take on the Pixel theme, allowing you to better customize Pixel folder icons than Nova, but their pill search bar is separate from Quickbar and unthemeable, unlike Nova. Action Launcher has a leg-up on Nova’s theme because they have a shortcut to activate all their Pixel settings instead of Nova needing you to go through every single settings section. Where are the other launchers?

I wish I could tell you there’s a lot of great theming launchers out there. But there aren’t.

There are certainly theming launchers beyond Nova and Action, but none can play on their level. Apex is abandoned. ADW was abandoned for a long time and still hasn’t seen its new 2.0 version go beyond the beta. GO Launcher is spammy. Buzz Launcher’s controls are awkward and it doesn’t play well with Google Play theme elements. And Lightning Launcher is too complicated for most users (even for me!).

Then there are dozens of decent general-use launchers that can do what we call ‘light-duty’ theming: custom wallpapers, icon packs, and resizable widgets. This includes launchers like Smart Launcher, Arrow Launcher, and Aviate Launcher. They are capable launchers, but they can’t compete with Nova.