The Good Like its predecessor, the Bose SoundLink Color is a compact portable Bluetooth speaker that delivers impressive sound for its size (the sound is improved) and 8 hours of battery life. It’s now water-resistant and adds speakerphone capabilities.

The Bottom Line Modestly redesigned, the next-generation SoundLink Color is an excellent compact Bluetooth speaker that’s water-resistant and has speakerphone capabilities, as well as improved sound.

I was a fan of Bose’s original SoundLink Color Bluetooth speaker and praised it for being relatively affordable — by Bose standards anyway — and sounding good for its compact size. Its mostly improved sequel, the SoundLink Color II, also comes in a few different color options and is similar in shape, though it’s slightly shorter and squatter, and weighs a tad more (1.28 pounds. or 581g vs. 1.20 pounds or 544g) while costing the same price: $130, £120 in the UK, and AU$179 in Australia.

While the original’s finish was mostly smooth, hard plastic with some rubberized trim on top of the speaker and sides, this new model is entirely covered in soft-t0-the-touch rubber, which has a little give to it and seems better designed to withstand drops. The new speaker is officially water-resistant, too: Its IPX-4 certification makes it splashproof, though not waterproof. Or to put it another way, it should be able to spend some time out in the rain and survive. 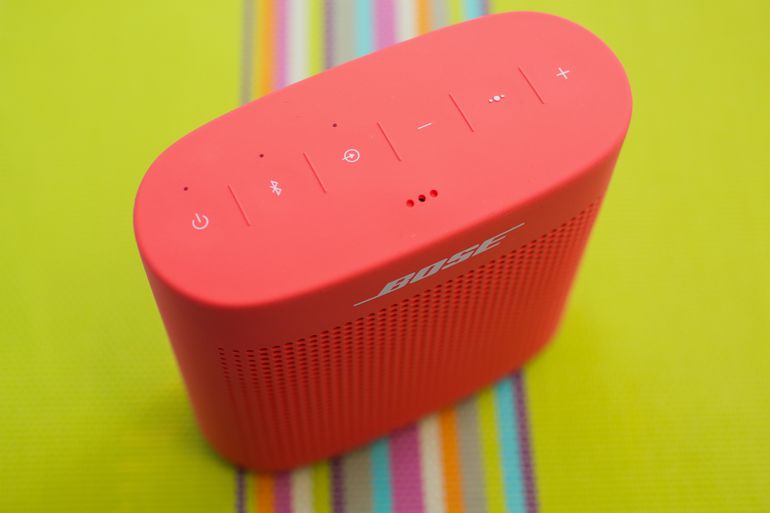 The speaker has a soft-to-the-touch rubberized finish and is water-resistant.

Other bonus features include a microphone for speakerphone capabilities, as well as NFC tap-to-pair technology for devices that support it. The SoundLink Color II can remember up to eight devices paired to it, while its eight hours of battery life — at medium volume levels — is the same as the original’s. (That’s decent enough but not exceptionally good).

I personally don’t think the design is an aesthetic upgrade, but the speaker does look a tad more understated and mature. I like the soft-to-the-touch finish, but the one downside is that it’s a magnet for dust, lint and carpet fibers, so you may find yourself having to wipe it down from time to time (as I said, it is water-resistant, so taking a wet cloth to it isn’t a problem).

Note, too, the USB-powered speaker does not include an AC adapter. That may be an annoyance to some, but I was fine with it — any standard phone or gadget charger you have will do the trick.