Lifetracker will nudge you to get stuff done, but only when the time is right (review)

There are many to-do, task-keeper, and other list apps available for your Android device. The biggest differentiators between these options is seem to lie in two main areas:

Interface/input: How easy, intuitive, and creative can an app make it for you to want to initially, and (more importantly) continue to manually input new tasks into it.

Intelligence/Reminders: How consistent and persistent can an app be in reminding its user to complete their tasks, without being intrusive and therefore a put-off.

Lifetracker is an app that believes it has found a solution to both of these issues, and in a lot of ways, you could say they’ve attempted this with a common concept. That concept is “context”. More on this in a bit.

Lifetracker doesn’t fancy itself a ‘task list’ per se, but rather a more intelligent app that “helps users manage their free time and achieve meaningful life goals through the unique artificial intelligence prediction algorithms“. It comes to us from the developer PDNA Ltd; it’s an app that’s safe for all ages, though the more routine schedule you have the more useful you will find this app. Again, more on this in a bit. 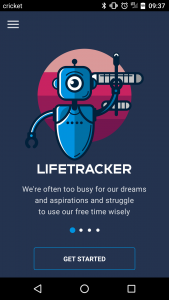 The developer has made getting started a very easy effort. First off you simply download from the Play Store. Upon installation and opening the app for the first time you are asked to pair your Lifetracker profile with an email address of your choosing. Then you are greeted with a few simplified tutorial screens, showing you how to add a task, tweak completion times, and mark it with one or more “contexts”.
These contexts are key, and one of the cores to Lifetracker’s approach to its interface. Let’s finally address just how Lifetracker does what it does.

To provide the intelligence it is advertising, Lifetracker uses three primary ‘context’ features:

First off, what is a “context”? It’s essentially a tag you apply to a task that relates to a 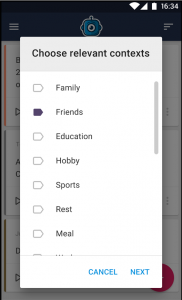 certain part of your life, such as work, rest, hobbies, etc. You have to apply at least one context to a task, but are free to apply more than one if appropriate to you.

Secondly, what is a “best time”? Instead of a due date (I have to get X done by Y day & time), Lifetracker asks you instead for an optimal/best-possible time to complete the task.

Using these two contexts, Lifetracker then takes a novel (though quickly growing in familiarity) approach to its task tracking. It uses its version of artificial intelligence, employing varying and proprietary algorithms. 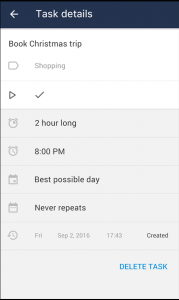 Example: As a user, when you are about to commence a certain task on your list that you’ve already created, you press the ‘play’ button on that task. When complete you click on the check mark, clearing it from you view. Lifetracker analyzes the task title & associated tag (‘work context’), and also the day, time, and task duration (‘time context’).
The app then uses this info for following tasks you input; any tasks with similar tags and completion dates/times will be used by the app in deciding when to “nudge” you, by way of notifications, to remind you that now would be a good time to work on that task.
The app learns the places, days, and time frames when you tend to work on tasks tied to a certain context/tag, and uses this knowledge to keep you on task!

The app interface is a very clean take on task input. Text is minimal, and the colors are a good mix of subtle but business-like. Tasks appear almost as Google cards in their look & feel.
The main interface screen has minimal but useful options for sorting your existing tasks (by 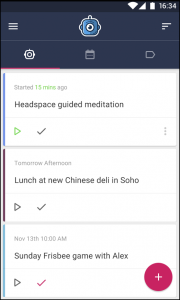 date created by optimal completion time, and by tag). There’s also a toggle to hide these sorting options and sticking with the current one, to gain a bit more screen. Nothing is really missing that feels missed.

As far as performance, the app does a good job in notifying the user based on past performance. If you’ve logged completion time for a particular tag or generally work on a task at a regular day or time of day, you will be nudged by Lifetracker to get back at that task when that time comes around again.

What Could Use Improvement

While the app is very good at what it does, I tend to question how useful this app is, as it 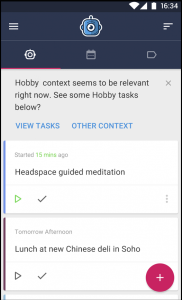 (in my opinion) overlaps at least once calendar/task/note-taking app you likely already have on your device.

You already have the capacity to log your to-do’s and view them, and more importantly, view them relative to all your other meetings, appointments, and other life events.
To fully use Lifetracker, you may have to input tasks redundantly, once to show in relative to your overall life schedule (see #1 above), but again so Lifetracker can provide the smarter learning & “nudging” to keep you on track (a calendar item can oh-so-easily be swiped away into oblivion…).

Also, it would seem as though the AI would be useful provided the user’s workflow is rather consistent and his/her life is fairly routine. I’m boring and routine, so it worked great for me. But if you complete tasks on a “swing-shift” basis, I don’t see the notifications being able to keep up with your crazy lifestyle.

Lifetracker is a polished and intuitive app that is best used to complete the want-to-do tasks in life, where time spent completing, finishing, and improving would be better spent that plopping down in front of the TV.
Where I see Lifetracker being best utilized is in one of two ways:

As a supplemental task app, for those “want to do” items, like practicing yoga after the kiddos are in bed, checking in on family members, practicing a musical instrument, or perhaps developing a writing habit.  Stuff that doesn’t fit into your already-crammed schedule, where it will almost certainly get lost.
Taking the smarts that Lifetracker leans on, and using that as an integral part of a calendar/task app, to supplement the hard-definition meetings with these softer, want-to-do tasks.

I’m all for smart and useful apps, but I’m even more for installing and managing fewer of them on my devices.