Snapchat’s Spectacles won’t make you look like a Glasshole

You would have thought that after the spectacular failure of Google Glass and the virulent public rejection its users experienced, other companies would be wary of developing and marketing camera glasses. But 2016 has been that kind of year. Earlier this week, Snapchat, they of the wildly popular messaging app, began rolling out its first wearable, Spectacles, through a series of pop-up vending machines. The $130 glasses are already a hot commodity, fetching upward of $900 on eBay. I managed to get my hands on a pair (don’t ask how) and have some thoughts on the matter.

The Spectacles are sunglasses first and foremost, and they function well in that role. The plastic frames are lightweight with circular lenses and come in a variety of increasingly loud colors: black, aqua and fire-engine red. I personally prefer a nice wayfarer or aviator shape, but the Spectacles still performed an admirable job of shielding my eyes from the sun’s damaging UV rays.

The camera itself is mounted on the tip of the left temple arm, where it meets the eye wire. The camera unit is entirely self-contained and runs on a rechargeable lithium-ion battery. And, like Apple’s wireless AirPods, the Spectacle’s case doubles as a charging station that can fully fill a dead battery in about 90 minutes. The camera, while not nearly as powerful as what you’d find on an iPhone 7 or Android Pixel, is good enough for what most people use Snapchat for.

And what they lack in image quality they make up for in ease of use. By not requiring you to have your phone in hand, the Spectacles can be used in a much wider range of situations. Suddenly, all of those action sports shots for which you previously had to break out the GoPro can be done in 10-second increments. Really, any two-handed activity would benefit from using these glasses. Take note, however: The glasses are not waterproof and are also susceptible to temperature extremes, so be sure to leave them back at the ski lodge this winter.

Pairing the Spectacles to the Snapchat app is super-simple. You simply put on the Spectacles, look at your snapcode and tap the “record” button on the glasses. Downloading data from the specs is straightforward, too. Just navigate to the Memories screen, pick the Specs tab from the top bar and select the correct Snap from the list. We’re not sure if there’s an upper limit to how many Snaps you can record on the device before syncing with the app, but we got north of 10. 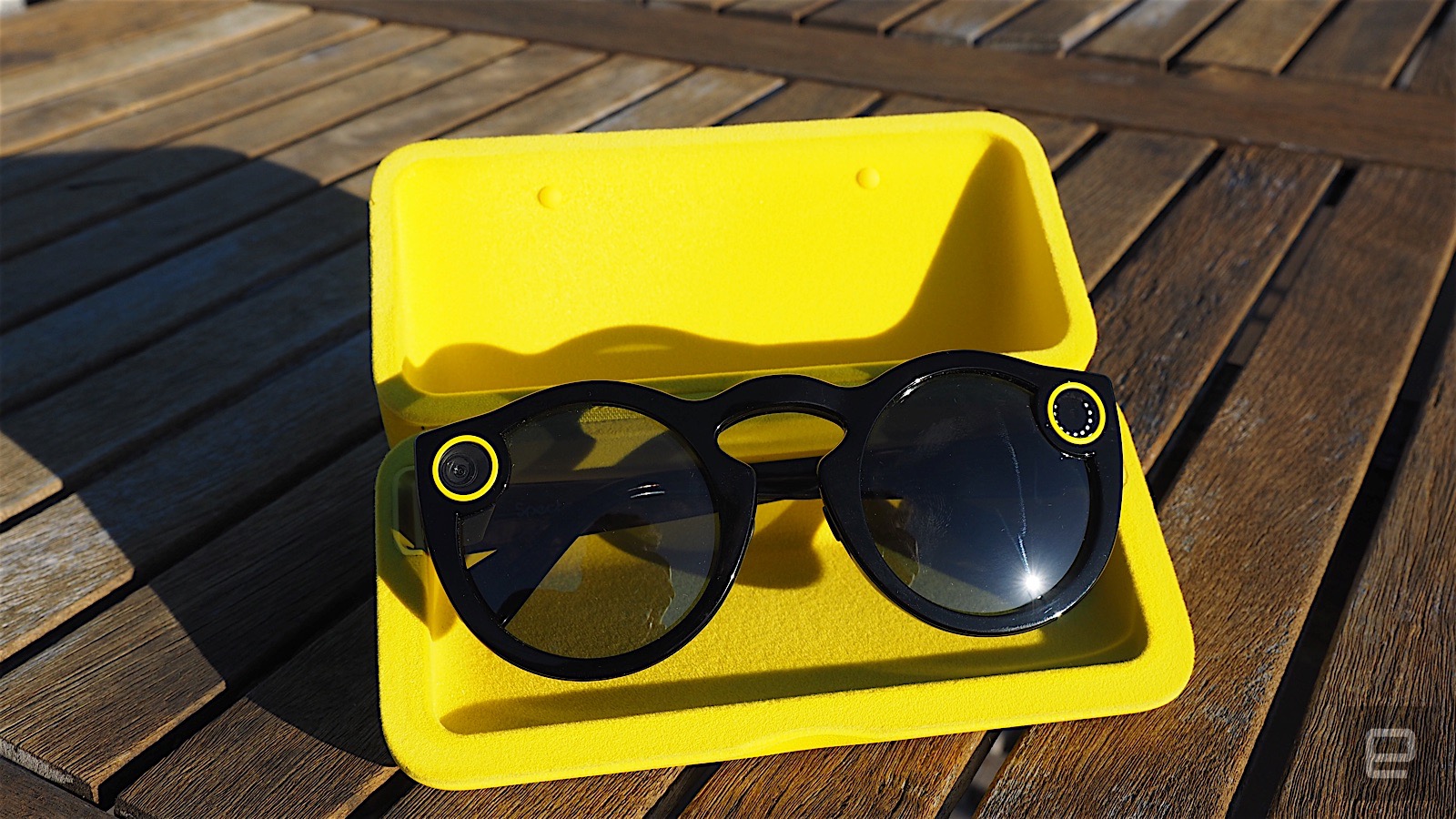 I noticed that the app routinely failed to properly download video from the glasses to the phone, but usually did so on the second try. It’s a bit of a hassle, but an easily remedied one. Aside from being unable to actively monitor what I’m recording or reframe a shot, using Spectacles wasn’t all that different from using my phone. At least with the Specs, I never had to worry about my thumb covering the lens. Plus, if the worst happens, I’d rather drop a pair of $130 novelty camera-glasses than my $600 smartphone.

Now, whether I, as a 35-year-old attention-averse adult, would ever be caught dead wearing them in public is an entirely different question. See, I remember the dark days of the Google Glasshole. Even in techtopias like San Francisco, Glass wearers were publicly mocked. One lady was even physically assaulted at a bar in the Lower Haight. Many fine drinking establishments throughout the city still ban them outright. Granted, the Spectacles can capture only 10 seconds of video at a time, but I’d be very hesitant to show up to a place like Molotov’s or the Lucky 13 with these on my face.

Another question is: Where do you actually use them? They’re clearly geared for people who are out and about in the daylight hours (hence the sunglasses the camera’s built into). But what of Snaps taken indoors or at night? The camera is subtle enough that you won’t attract attention, but the bright-ring LED that flickers on to indicate that you’re recording — not to mention that you’re wearing electric-blue sunglasses in a bar at 11PM — is likely enough to draw quizzical looks from other patrons and questions from management.

Overall, though, these are a clever, relatively inexpensive wearable. They’re a tenth of the price of Google Glass, they actually function beyond serving as a way to strap a camera to your face and, depending on your age bracket, they could even be considered stylish. Getting your hands on a pair is going to be a challenge in the immediate future, but for those of us with active Snapchat followings, these Specs will prove invaluable.