Google’s first Chromecast was a cheap and ugly little stick that nonetheless served a very important purpose. At $35, it was about the cheapest way to make a plain old TV “smart,” letting people get Netflix, Hulu, YouTube and movies from Google Play right on their televisions with zero fuss.

But things have changed since the first Chromecast arrived in mid-2013. 4K TVs are becoming more and more commonplace, while companies like Amazon, Apple, Microsoft and, yes, Google are battling to bring video to your living room. Also, if nothing else, just about every TV these days has built-in Netflix and YouTube apps. Into this crowded market comes the Chromecast Ultra, an update to the 2015 version that adds support for 4K high dynamic range (HDR) streaming.

The thing is, that extra feature doubles the price: The Chromecast Ultra comes in at $69. It’s no longer in impulse buy territory for most people, so the question is: Does this improved video quality warrant a purchase?

If you’ve seen last year’s puck-shaped Chromecast, the Ultra will look familiar. It’s still a small, circular device with a short HDMI cable that magnetically attaches to the back. But, given the extra technology on board, it’s a little larger and fatter than last year’s model. It’s still ridiculously tiny, especially considering the extra capabilities contained within. You can still easily toss it in a bag and forget about it.

Just like the standard Chromecast, the hardware here is minimal: There’s the aforementioned HDMI socket, a mini-USB port for power and a reset button. That’s it. The power cord, however, is different this time. The brick actually has an ethernet port in it, all the better for quickly streaming 4K videos. Unfortunately, the Chromecast Ultra can’t be powered by your TV’s USB port anymore; you’ll need to plug it into a wall socket.

Setup is also identical to what you’ll find with a standard Chromecast. Install the Google Home app on your phone, plug in the Chromecast and the app will detect your new hardware. From there, it’s just a matter of getting it on your home network (WiFI or wired) and signing in with a Google account. Once that’s done, you’re free to start casting content to your TV using any compatible third-party iOS or Android app. I know I’m repeating myself, but there’s really no other way to say it. Using the Chromecast Ultra is no different from using any other Chromecast. The Google Home app presents suggestions for apps that are compatible with the Cast technology, including all the usual suspects like Netflix, YouTube, Hulu, Vudu, HBO Go and Now, WatchESPN, MLB.TV, and NBC Sports, among many others.

Once you start up a video stream in the app, tap the “Cast” button when it appears on-screen, select the Chromecast Ultra, and the video will start playing on your big screen. Most of the time, there’s a few seconds of buffering as you’re starting something up, but things loaded quickly and consistently for me after a few seconds on a 100-Mbps connection.

The big catch here is actually finding 4K content to watch. That’s not a fault of the device; it’s just the reality of the streaming space right now. The only apps I found that supported 4K streaming were Netflix, Vudu and YouTube, with the former two options being the only ones in the group offering shows and movies you’ve actually heard of. YouTube is heavy on tech demo videos, but lacking in things you’d actually want to watch.

While Netflix and Vudu have 4K content you might want to watch, the catalog is still very small. Just about all of Netflix’s original content is available in 4K now (as well as Breaking Bad) but that’s about it. And Vudu has a paltry 68 movies available to rent or buy in 4K. As for content that supports high dynamic range — arguably a bigger step forward in terms of video quality than 4K resolution — there’s even less of it out there.

There are other problems with the 4K experience on top of limited content. For starters, the standard $9.99-a-month Netflix plan doesn’t include 4K streaming. I totally forgot that was the case and spent half an hour watching streams in 1080p before remembering that I hadn’t upgraded my Netflix plan. If you want to watch 4K, you’ll need to sign up for the $11.99 plan that also lets you watch simultaneously on four screens rather than just two. This is something lots of customers likely won’t realize, and there’s no prompt in the Google Home app to remind you to upgrade your Netflix plan.
As for Vudu, a 4K rental costs a whopping $9.99, while buying a movie costs an even steeper $29.99. That is a lot of money for what feels like a marginal improvement in quality. (Your milage may vary, but more on that in a moment.) Again, none of this is Google’s fault — but it does make it harder to recommend buying any 4K streaming device right now, the Chromecast Ultra included. 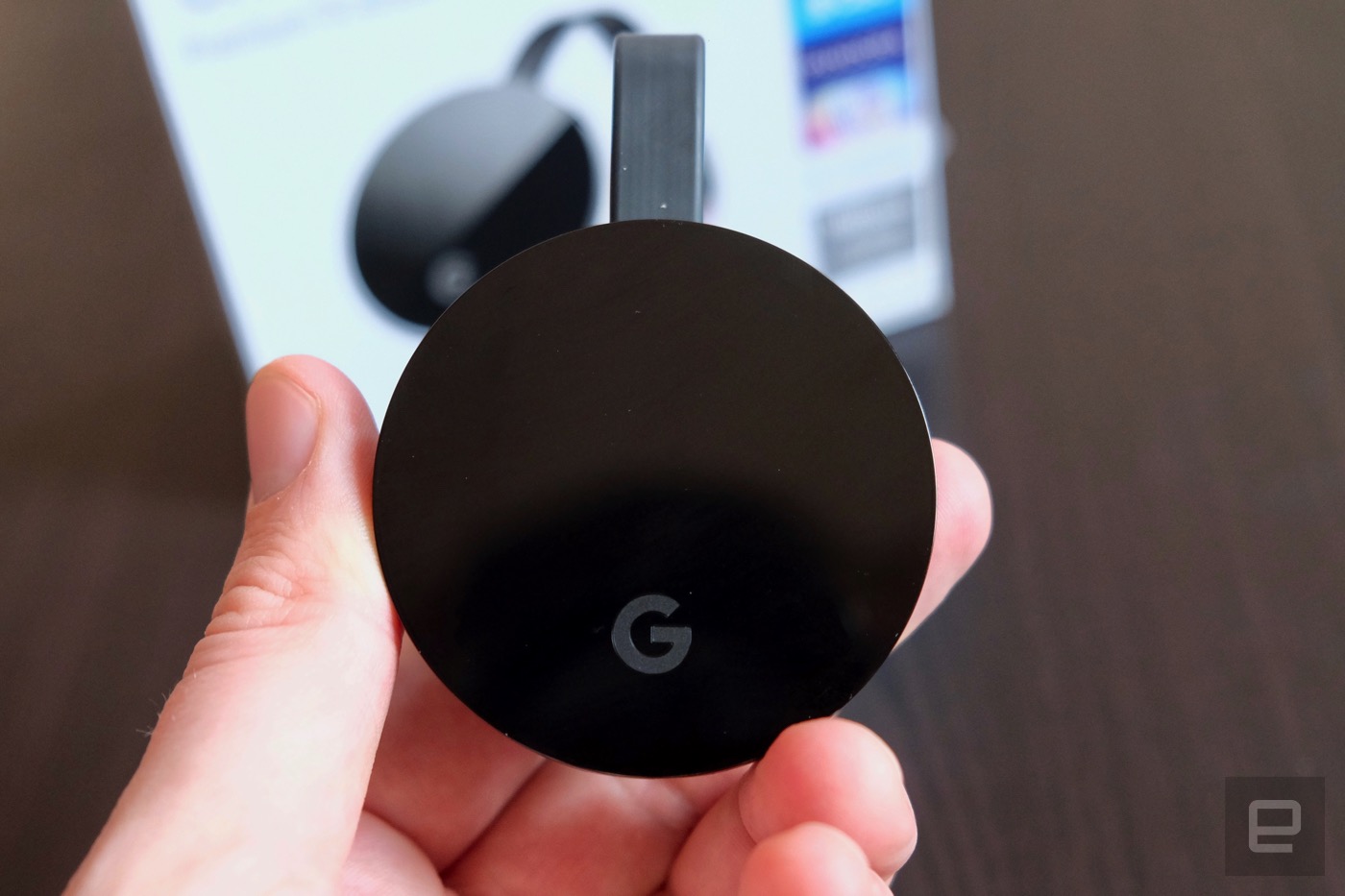 As I mentioned earlier, the Chromecast Ultra performed quite well even over WiFi. Loading up 4K UHD content worked quickly and reliably. Of course, that’ll depend on your internet connection, but getting 4K streams working here wasn’t an issue whatsoever.

It’s worth taking a quick second to note that two of our main caveats about last year’s Chromecast refresh still apply here: You always have to use your phone as the remote and there’s no native Amazon Instant Video app. The latter is on Amazon, as it could certainly add Chromecast support, but would prefer you buy the Fire TV or Fire TV Stick instead. As for that first caveat, that’s just how the Chromecast has always worked, but that doesn’t mean we wouldn’t enjoy a simple remote to handle play and pause duties (like Roku and Amazon both include).

As for picture quality, there’s no doubt it’s stunning — but I give the vast majority of that credit to the wonderful 55-inch LG OLED TV I used to test the Chromecast Ultra. Senior editor Devindra Hardawar and I watched a bunch of Netflix shows (including Jessica Jones, Daredevil, House of Cards and Stranger Things) and streamed Pacific Rim from Vudu.

Things looked excellent across the board, but Pacific Rim looked particularly gorgeous. Guillermo del Toro’s brilliant color palette shined throughout the film, while both the monstrous Kaiju and massive Jaeger robots looked more detailed and terrifying than ever. Oranges and blues in particular looked incredibly vibrant throughout the film, thanks to HDR technology — but sometimes, it felt like things were just a bit too saturated. Of course, it was near impossible to discern any pixels, even when standing a foot or two away from the screen.

But I was surprised to realize as the day wore on that 4K generally added very little to the experience. If you purchase a new TV as nice as the LG we were watching, you’ll definitely notice big improvements in the quality — regardless of whether it’s in 1080p or 4K. We did lots of A/B testing, flipping back and forth between Netflix shows streaming through the Chromecast Ultra and the current Apple TV (which only outputs in 1080p) and I was hard-pressed to discern a real difference. Even 1080p video looked outstanding on this fine TV. So did the 4K stream, but it wasn’t nearly the quality upgrade I was expecting.

Ultimately, the question of whether this is a major upgrade is a subjective one. Colors were far less saturated when watching Pacific Rim in 1080p, while the 4K rental occasionally entered the realm of oversaturation, at least to my eyes. The 4K HDR version of the film was impressive, but I don’t think it was definitively better. The Netflix shows we watched in 4K didn’t quite have that same oversaturated sheen. Things looked marginally sharper, but I would be hard-pressed to tell the difference in a blind test. 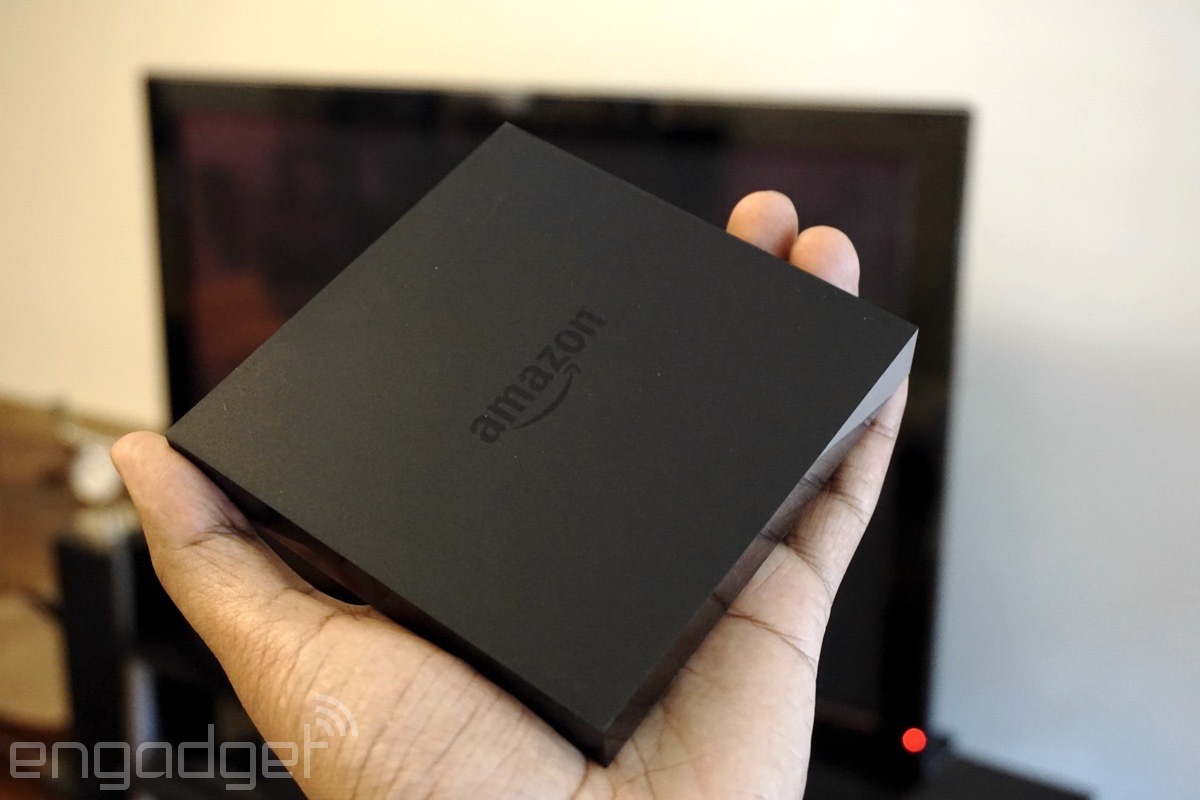 Perhaps the most obvious competitor to the Chromecast Ultra is Amazon’s Fire TV, which was updated last fall to include 4K video playback. It’s currently selling for $89, twenty bucks more than the Chromecast Ultra, but it has two big advantages. First is a real remote, and second is Amazon Instant Video support. That means that the Fire TV automatically has a larger library of 4K content, as Amazon supports the format. Then again, Amazon doesn’t offer very much video in 4K yet, but that’ll change over time.

Roku’s new Premiere+ is another contender. The $100 device streams 4K video with HDR at up to 60 frames per second. It also includes an Ethernet port, a microSD card slot and a remote. Additionally, it supports Amazon Instant Video. If you’ve used and enjoyed Roku products in the past, the Premiere+ is certainly worth considering.

The other big competitor to the Chromecast Ultra comes from your television itself. Most, if not all 4K TVs are so-called “smart TVs.” That means you’ll get access to apps like Netflix and Vudu right on the TV itself, and those apps will take full advantage of your set’s resolution. Lots of smart TVs have pretty terrible interfaces and it isn’t always easy to add apps, so make sure your television has what you want before you buy it. But Netflix and YouTube are almost always there. Furthermore, lots of new TVs now support Google’s casting technology. They essentially have a Chromecast built right in, then — something that makes buying a separate device unnecessary. Google’s original $35 Chromecast is so useful and so cheap that it was almost is a no-brainer. At double the price, I can’t quite say the same about the Chromecast Ultra. It works as promised, but the dearth of 4K content makes me hesitant to recommend it. Plus, chances are if you have a good 4K TV, it already has built-in Netflix and YouTube apps anyway.

Over time, as more and more video apps start supporting 4K, the Chromecast Ultra will serve more of a purpose. But the lack of video content coupled with the Chromecast’s higher price makes me feel like this device doesn’t quite have a purpose yet. If for some reason you have a great 4K TV that doesn’t have Netflix built in, though, this is probably the simplest way to remedy that situation. That has value — even if most consumers out there don’t need it.