Fast-paced, reaction-based, “twitch” games have always been my thing, but rarely have they ever been this simple. RunGunJumpGun blends the brutal level design of a twitch game, the accessibility of an automatic runner and one of the most intuitive control schemes ever conceived. I first played it in early September, just after it launched on Steam. Despite having just two inputs — shoot and jump — there’s an awful lot more to the game.

Ostensibly, it’s an automatic runner — think Canabalt or the upcoming Mario iOS game — but with a wealth of gameplay mechanics and ideas added on top. You’re always just running, gunning or jumping, of course, but through intelligent level design and a masterful difficulty curve, it stays fresh and taxing throughout its 120 levels.

Today, RunGunJumpGun is out for iOS and Android, and it’s perhaps the most challenging, rewarding and downright fun mobile game of the year. Before its release, I spoke with the team behind the title, ThirtyThree Games, to find out how they managed to get so much game out of just two buttons.

“We weren’t out to just make an infinite runner mobile game that’s run-of-the-mill,” said programmer Logan Gilmour. “We were hoping it would stand more among PC games than mobile games, but then play equally well on mobile.” ThirtyThree Games set out to emulate the rush of games like Super Meat Boy, VVVVVV and Hotline Miami, and they nailed it. The game has the same fast pace and “live, die, repeat” mentality, for sure. But its control scheme and structure make it a very different experience overall, and one that stands alone without the need for comparisons.

At its core, RunGunJumpGun is about balancing the two inputs. “Jumping,” in this game, is actually more like flying — your character aims their gun downwards and will ride upwards while you hold down the button. You also need to shoot enemies and obstacles in front of you, but as soon as you do, you start to lose altitude. Several times per second, you’ll be deciding which button to press, but you never move your fingers apart from to push down. One button, one finger.

Removing all the other controls completely strips away everything between you and the game. “It lets you fall into a trance, and that’s kind of a big thing for the game, getting people lost in it,” said music and story designer Jordan Bloemen. “[Players] aren’t focusing on what they’re trying to do with a controller, they’re just trying to manage two buttons … Beyond that everything can just kind of wash over them.”

“It lets you fall into a trance, and that’s kind of a big thing for the game, getting people lost in it.”

Stripping away controls has its issues, though. You’re removing a lot of the tools that gamers are typically given to overcome to the challenges placed in front of them. It’s easy for that to become annoying, but although you will certainly be frustrated by RunGunJumpGun at points — some levels had me dying maybe 30 times in a row — you’ll be frustrated at your lack of skill, not at the game itself.

That sense of fairness is key to twitch games. When one hit can kill, developers getting something wrong is difficult to stomach. Take Furi, a boss rush game released earlier this year. It’s generally superb, but there are several moments where it seems the game is unfair — maybe a parry timing is off, a hit box not quite right. As a result, I constantly put it down for weeks at a time in frustration. As mentioned, I struggled massively with some levels in RunGunJumpGun but I never once felt the urge to stop. I always knew it was my fault I was dying.

I struggled massively with some levels, but I never once felt the urge to stop. I always knew it was my fault I was dying.

A lot of work went into making RunGunJumpGun, its levels and each second of gameplay, feel fair yet challenging. There are small things, like making levels “concave,” so your character can’t get caught in a cove and die, or ensuring that the automated movement “is always the speed you want to go at,” but the truly interesting tweaks are invisible.

ThirtyThree Games used analytics and testers to analyze every second of gameplay. “We let a lot of people play the game, and we could see these big spikes where everyone was dying,” explained Bloemen. The team then acted on that data in different ways. Some levels were simply reordered for a smoother difficulty curve, but others were changed on a second-by-second level. “We collected the actual position where every person died,” said Gilmour. “So we could see where everyone was being killed by one hazard, and then just take the hazard out.”

The team would iteratively re-order and smooth out the levels, then bring in a new group of testers that hadn’t played before and see what the new data looked like. Their own little live, die, repeat loop, as it were. The importance of curving difficulty, according to the team, is paramount. “Especially the first world, that’s kind of make-or-break, said Bloemen. “That’s where you’re going to piss someone off and they’re not going to play anymore.”

It’s tough to find a better example of a difficulty curve done right.

While the first world (there are three, each containing 40 levels) hooked me; the second made me fall in love. It’s there that the developers start throwing a bunch of new elements at you, and it’s tough to find a better example of a difficulty curve done right.

Take the first ten minutes or so of world two: It starts by introducing a new mechanic — screen warping, which allows you to fly out the top of the screen and appear at the bottom, or vice versa. Then, it asks you to use screen warping to navigate a complex level. Then, it makes you do that with pin-point accuracy — one false move and you’re dead. Finally, you’ve nailed it. Of course, before you have time to relax, turrets are added. Then force fields. Then spaceships that shoot at you. Finally, fire turrets — the barrage of new elements feels like it never ends.

Removing the deaths, the section amounts to maybe three minutes of gameplay. In that time, you’ll have learned and mastered multiple new mechanics and hazards. Although the deaths will come thick and thin, no single level transition is too challenging, But if you skipped any given minute, the leap in difficulty would be near insurmountable. 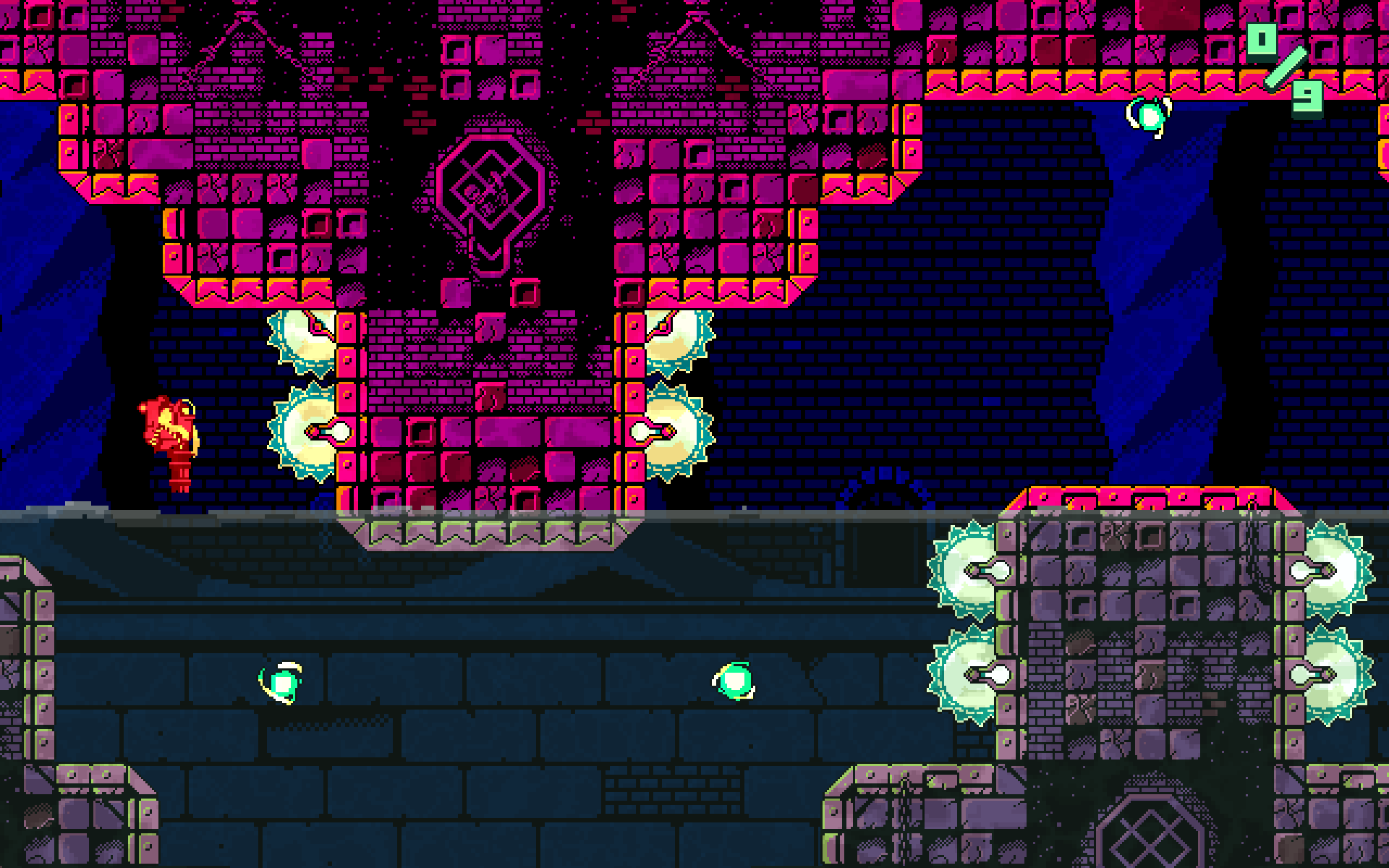 Later in the game, some of these new mechanics take a little longer to get used to. The addition of water in particular threw me off for a while, because the movement physics are completely different. The final few levels are also an exception, as the difficulty is pretty much just ratcheted up to 11. But the general curve, and the way new ideas are introduced, is nothing short of perfect.

While data obviously had huge impact on defining the game’s structure, it wasn’t always enough. The team had their own thoughts on how enjoyable or challenging each level was, and there’s not a linear line of difficulty from beginning to end. “It’s important to have a little bumpiness in that curve,” said Gilmour. “Sometimes when we bring in a new mechanic, we make the first version of that a little harder. But you overcome it, and then the next time it’s easier, and you get a nice win, it feels like you’re getting some mastery.”

It also helps that playing the game feels great. The pixel art is bright and easy to follow, while the EDM soundtrack mixes menacing bass with light melodies that reminded me of another twitch favorite of mine, Electronic Super Joy. Like ESJ, rather than taking itself seriously, RunGunJumpGun is filled with humor. Some of this comes through dialog — there’s a story told through one-liners before each level — but a lot is down to the game itself. I lost track of the number of times I fell into an obvious trap, or a spinning disc bounced up at just the right moment to kill me — there’s a deviousness to the level design that, when coupled with the quick and colorful restart animation, actually makes dying as funny as it is frustrating.

There’s a final piece to RunGunJumpGun I’ve neglected to mention, and it’s perhaps the thing that’ll keep you coming back: Atomiks, the game’s name for the 10 tokens scattered throughout each level. Taking the “Atomik path” will bring you closer to death than any other path through a level, essentially making it “the nastiest way to play,” according to Gilmour. A tone chimes when you collect an Atomik, increasing in pitch each time to form a satisfying musical scale.

They’re almost like false waypoints, tempting you off the safer path at every opportunity. But collecting Atomiks is also the way you unlock more worlds, and “completing” the game is collecting them all. The path to victory is littered with near-endless death.

I played RunGunJumpGun a lot on PC, and grew deeply attached to it. As such, I was a little worried about how the game would handle on mobile. There’s a tactile immediacy about hammering away on a keyboard that’s just missing from a phone or a tablet. But my concerns were unfounded. The simplicity of the layout — tap the left side of the screen for jump, the right side for gun — means that you don’t miss the tactile feedback too much. I do think the game controls a little better with a keyboard, but being able to play it anywhere more than makes up for that.

“Personally, my favorite way to play it is on iPad,” said Gilmour. “It’s killer, the screen is really responsive, and you’re holding this thing, it reminds me of playing a Game Boy when I was a kid.” I have to agree. It’s great to jump into for a couple of minutes at a time, or to completely zone out with for an hour. I’ve handed the game to a few friends, and even those that don’t typically enjoy twitch games had a good time.

RunGunJumpGun is out now for iOS and will be released imminently for Android, priced at $2.99. There’s been some talk of a PlayStation Vita port in the future, but that’s very much in the “research to see if it makes sense” phase, according to Bloemen. Oh, and if playing on a PC or Mac is more your speed, the price of the Steam version of the game is going to drop down to $2.99 temporarily as well. In case it wasn’t clear, whatever your platform of choice, I can’t recommend this game enough.