Xiaomi’s curved Note 2 has a striking yet familiar look

It was only last month when Xiaomi launched the Mi 5s and Mi 5s Plus, but the Chinese company is already back with yet another flagship model. What we have here is the Mi Note 2 which, as you can tell by the name, is all about its large 5.7-inch 1080p display and generous 4,070 mAh battery. If it weren’t for the missing stylus, you’d easily confuse the Mi Note 2 with the Samsung S7 Edge or Note 7: It comes in a familiarly gorgeous body design with curved glass on both sides, and yes, much like Samsung’s offerings, the Mi Note 2 features a flexible OLED screen that lightly wraps around the edges, though it’s just for looks for now. Not bad for a phone that starts from 2,799 yuan or about $413.

As a flagship phone, the specs should come as no surprise: Qualcomm’s latest Snapdragon 821 chipset (2.35GHz; same as the Mi 5s Plus), from 4GB of LPDDR4 RAM, from 64GB of UFS 2.0 storage, NFC, Quick Charge 3.0 and HD audio playback (192kHz/24 bit). Xiaomi is pitching the Mi Note 2 as a “business flagship” so roaming support is obviously very important: It does LTE Cat 11 with up to 600Mbps downlink using tri-carrier aggregation, and its top model supports 37 bands (22 of which are LTE) which matches the iPhone 7 Plus and beats the Huawei P9 Plus’ 32 bands. 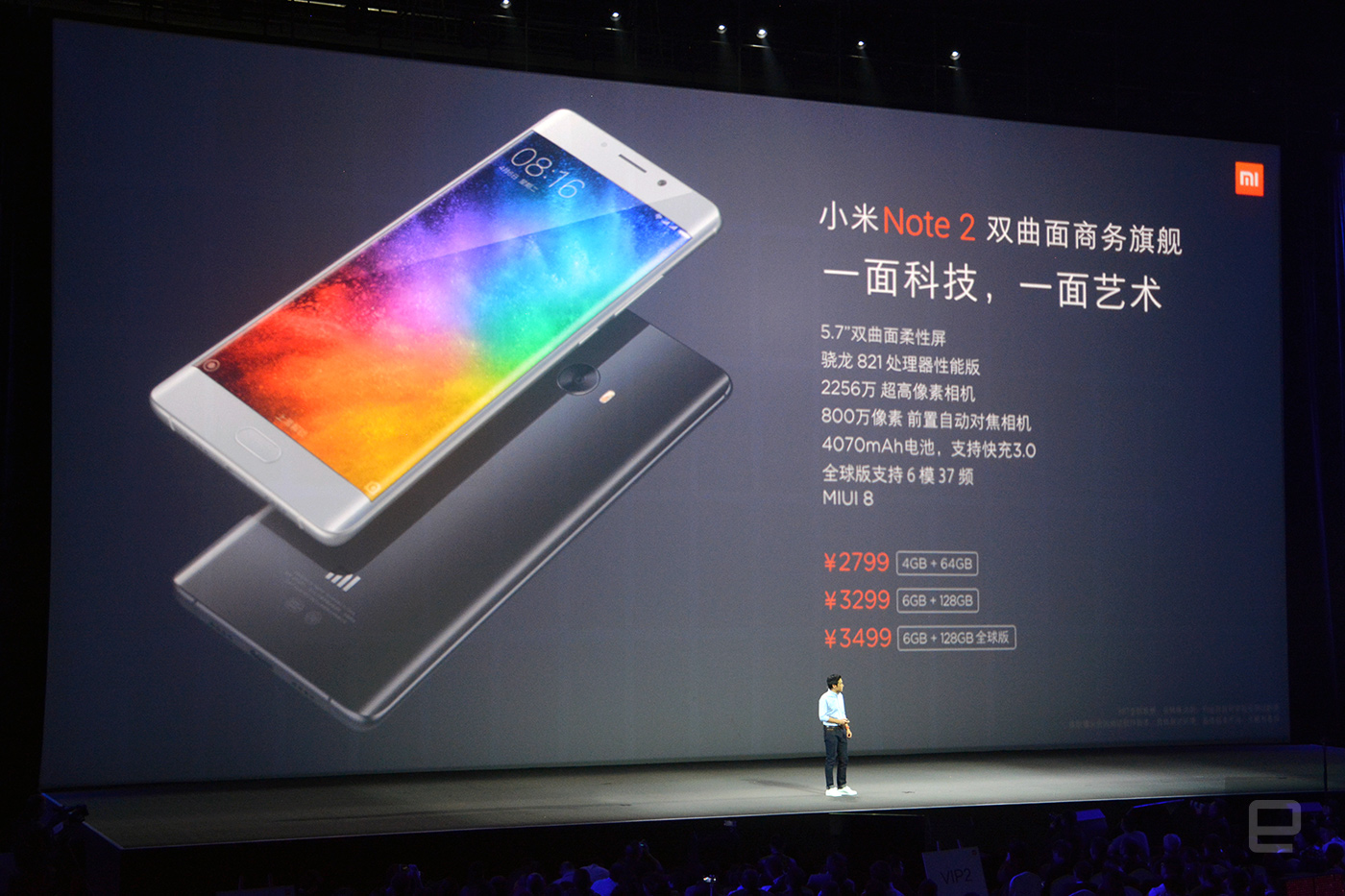 On the photography side, the Mi Note 2’s main camera has opted for a higher resolution — using the 22.56-megapixel Sony IMX318 sensor — instead of larger pixels like the Mi 5s series has. While it doesn’t have optical stabilization (nor laser auto-focus for that matter), it does offer electronic image stabilization for 4K video capture. As for the front-facing camera, we have an 8-megapixel f/2.0 imager with Sony’s IMX268 plus auto-focus — which is still a missing feature on many selfie cameras. Not only does this come with Xiaomi’s third-gen beautification software, it also has a cool feature which makes sure everyone in the shot isn’t blinking: This is achieved by taking burst shots, and then the software picks the best shot and also replace the faces of whoever blinked with the correct ones from other shots.

Due to the more complicated manufacturing methods for this design, the Mi Note 2 costs a little but more than Xiaomi’s typical price points. The base model with 4GB of RAM and 64GB of internal storage is going for 2,799 yuan or about $413, then the next model up with 6GB of RAM and 128GB of storage costs 3,299 yuan or about $490, and finally we have the ultimate model with the same specs but also with global bands asking for 3,499 yuan or about $516. It comes in Piano Black and Glacier Silver, but the latter won’t be available for another two to three weeks. Unfortunately, you won’t be able to buy this phone in the US, but you’re bound to find one from online importers.