The Good The Sony MDR-1000X is an excellent-sounding, comfortable wireless headphone with effective noise-canceling that measures up to Bose’s for muffling ambient noise. It has good battery life and some nifty extra features geared toward frequent travelers.

The Bad Not great as a headset; its adaptive noise-canceling is too noticeable at times.

The Bottom Line If you can overlook a few small drawbacks, the MDR-1000X is a top-notch wireless noise-canceling headphone that’s stacked with features and sounds excellent.

When it comes to noise-canceling headphones — those models that actively block outside noise like airline engines — Bose is generally considered the gold standard, but Sony’s engineers have been on a mission to beat Bose at what it does best.

The result of their efforts is the MDR-1000X, which Sony is calling its most technologically advanced headphone. It features both wireless Bluetooth connectivity and adaptive noise-cancellation in a swanky looking chassis that retails for $400, £330 or AU$700.

Sony says it developed new ear pads for this headphone, and the embedded touch controls for volume adjustment and skipping tracks either direction are more responsive than those found in its predecessor, the MDR-1ABT. 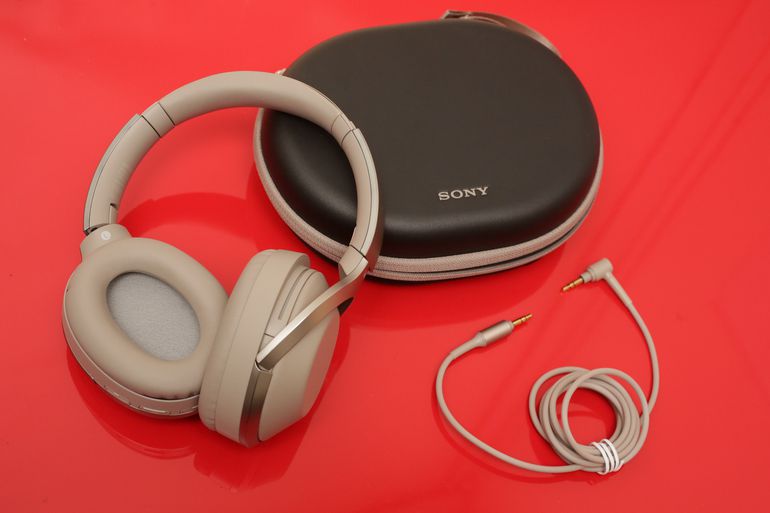 What you get in the box.

I’m not going to get into all the technical details but this headphone is equipped with similar drivers to the highly rated MDR-1A (a wired headphone) and has microphones not only on the outside of the ear cups to measure ambient noise, but inside to take account for the shape of your head and ears, and whether you wear glasses.

Sony has trademarked this feature, calling it the Sense Engine, and the company says it tailors the noise-canceling individually to you. You can also choose alternate settings that allow more ambient noise to seep in or even filter out everything but voices so you can hear announcements in airports while listening to music.

Another cool feature is the ability to muffle your music and let the outside world in by simply holding your hand over the right ear cup, where the touch controls are located. Once you finish talking to someone, you remove your hand and the music resumes playing at its previous volume and the noise cancellation kicks back in. 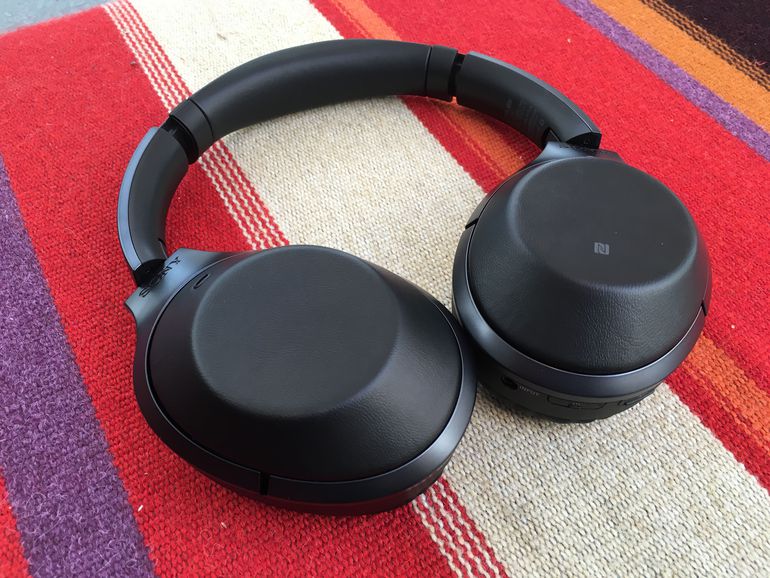 The headphone in black.

Battery life is rated at 20 hours and a cord is included if you want to listen in wired mode. You don’t need power to use it as a corded headphone (that means if the battery dies, you can still get sound out of it), but it sounds better as a powered headphone in wired mode.

Like a lot of Sony’s latest headphones, the company is promoting it as a high-res headphone, with support for Sony’s proprietary LDAC format that’s supposed to provide higher quality sound than conventional Bluetooth streaming. Unfortunately, you need a Sony music player with LDAC to take advantage of it. (Sony makes a variety of hi-res music players, but I suspect that the majority of people will use this headphone with their phones).

Also, Sony says this is the first headphone to have its Digital Sound Enhancement Engine (DSEE HXTM) built-in to “upscale compressed music from any source to near hi-res audio sound quality, even in wireless mode.”