The OmniWear Arc is a haptic neckband for serious gamers

There’s a lot to keep track of in a game like Counter-Strike. You need to know your location, where your teammates are, your ammo supply and most importantly — where your enemies are. With all these sights and sounds coming at you, it’s easy to miss something, which is why OmniWear is looking to offload some of that cognitive load to another sense: touch. The Arc neckband, launching on Kickstarter today, vibrates to let you know where your opponents lurk, ensuring you don’t miss a thing.

Haptic feedback — using vibration to enhance a virtual experience — is nothing new in gaming world. The past two decades have brought us products like the Rumble Paks for Nintendo 64 and DS and Sony’s line of DualShock controllers for the PlayStation. But the majority of titles use haptics as an add-on, making an impact feel a little more real or to startle you during an intense moment. Even if the haptics were keyed to the appearance of an enemy, they didn’t offer much in the way of information, especially not where the danger was coming from so you could act on it.

OmniWear attempts to tackle that problem with the Arc, a band that goes all the way around your neck. There are eight vibration motors placed around it, making 360-degree location tracking possible. If an enemy appears behind you, you’ll feel a vibration on your back. If they approach from the left or right, well, you get the idea. The idea is that you’ll become more aware of what’s happening around you, without taking your eyes off the action to look at the mini-map all the time.

The Arc is currently compatible with Counter-Strike and League of Legends, but the company plans to expand that list. The team can add new games easily enough because they’re not dependent on developers building support into their titles. Instead, the Arc uses an interesting workaround to function with various titles. 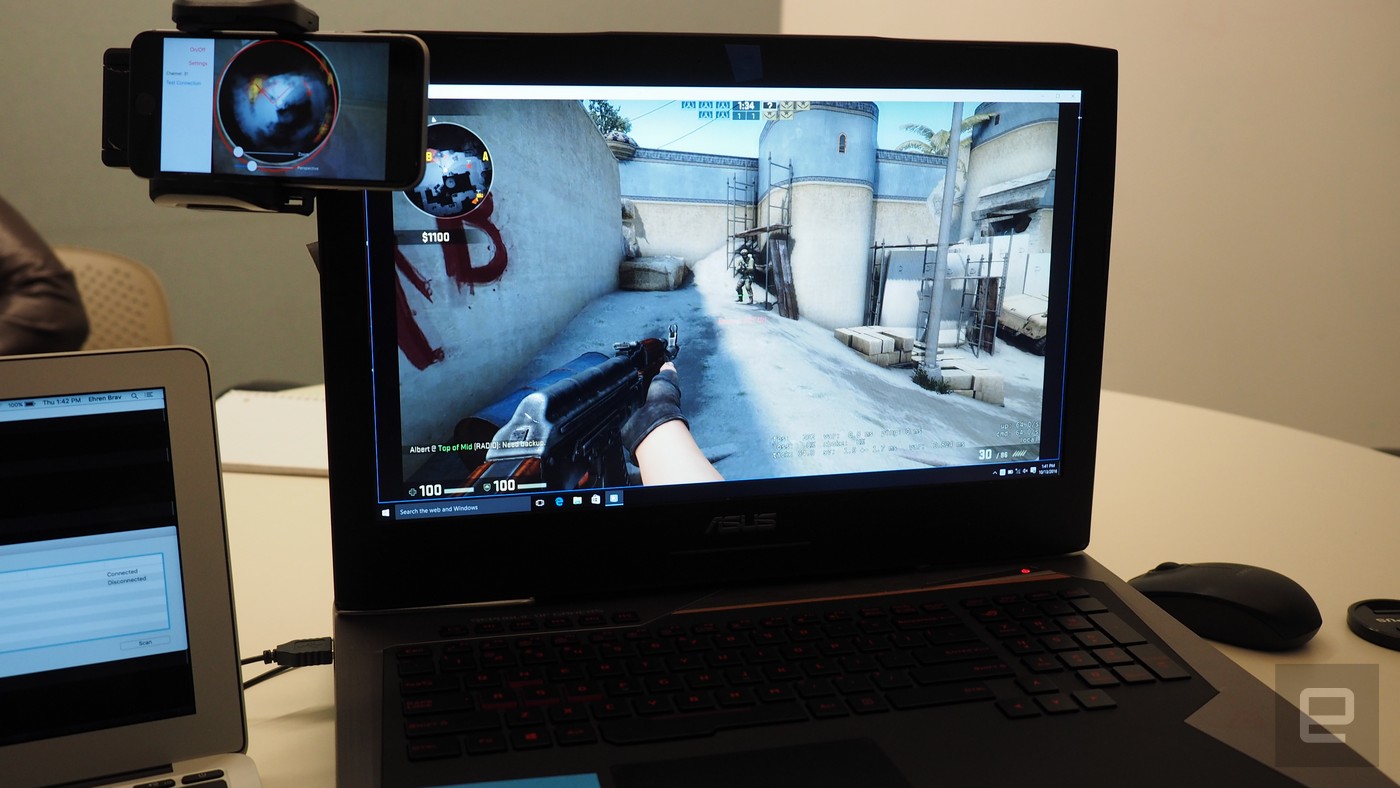 The Arc doesn’t actually connect to your computer at all — it connects to a mobile app on your phone instead. Clip your phone onto your monitor and open the program, which will “read” whatever’s going on in the game by watching the screen just like you would. In Counter-Strike and League of Legends, this is accomplished by pointing the phone at the mini-map itself, and the program translates the data into vibrations. It buzzes when an enemy first appears and is smart enough to keep track of which opponent is which so it doesn’t buzz again. The OmniWear team thought about having it buzz more often but decided that created too much feedback — enough to easily overwhelm a player.

I’d agree with that, as my brief time with the prototype neckband was marked by a persistent series of buzzes from all sides, with the vibrations a tad stronger at the nape of my neck. However, the final version should produce a consistent sensation that you can customize, with an option to adjust the strength of each individual motor. CEO Ehren Brav tells Engadget that this was added because gamers adore customization, likening it to a mouse with adjustable weight. 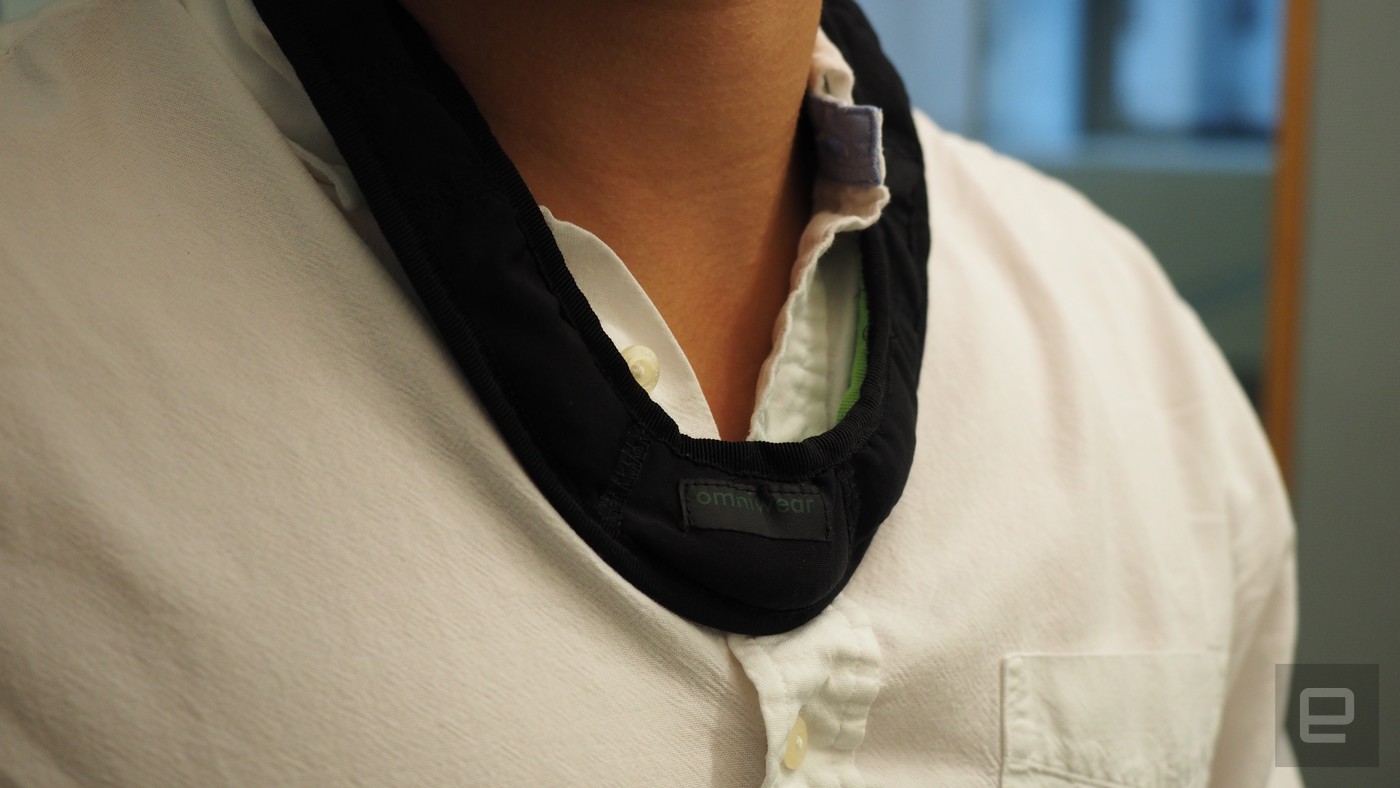 Although Brav says he’d love for gamers to never have to look at the mini-map again, I found that the Arc didn’t provide enough information to make this possible. I knew there were enemies off to my right, but I didn’t know how far away they were or which door they were standing behind. I still needed the map to gauge the exact level of danger I was in and which way I had to go to deal with it.

Still, the Arc made it possible to look at the map less often, leaving my eyes and ears open to focus on other things. It’s also easy to see how this can be applied in other industries, which OmniWear has considered — bicyclists and football players alike would benefit from the heightened awareness this kind of haptic feedback can bring. They can learn to avoid danger, or if they can’t, at least prepare for impact, which should have the happy consequence of reducing injuries. 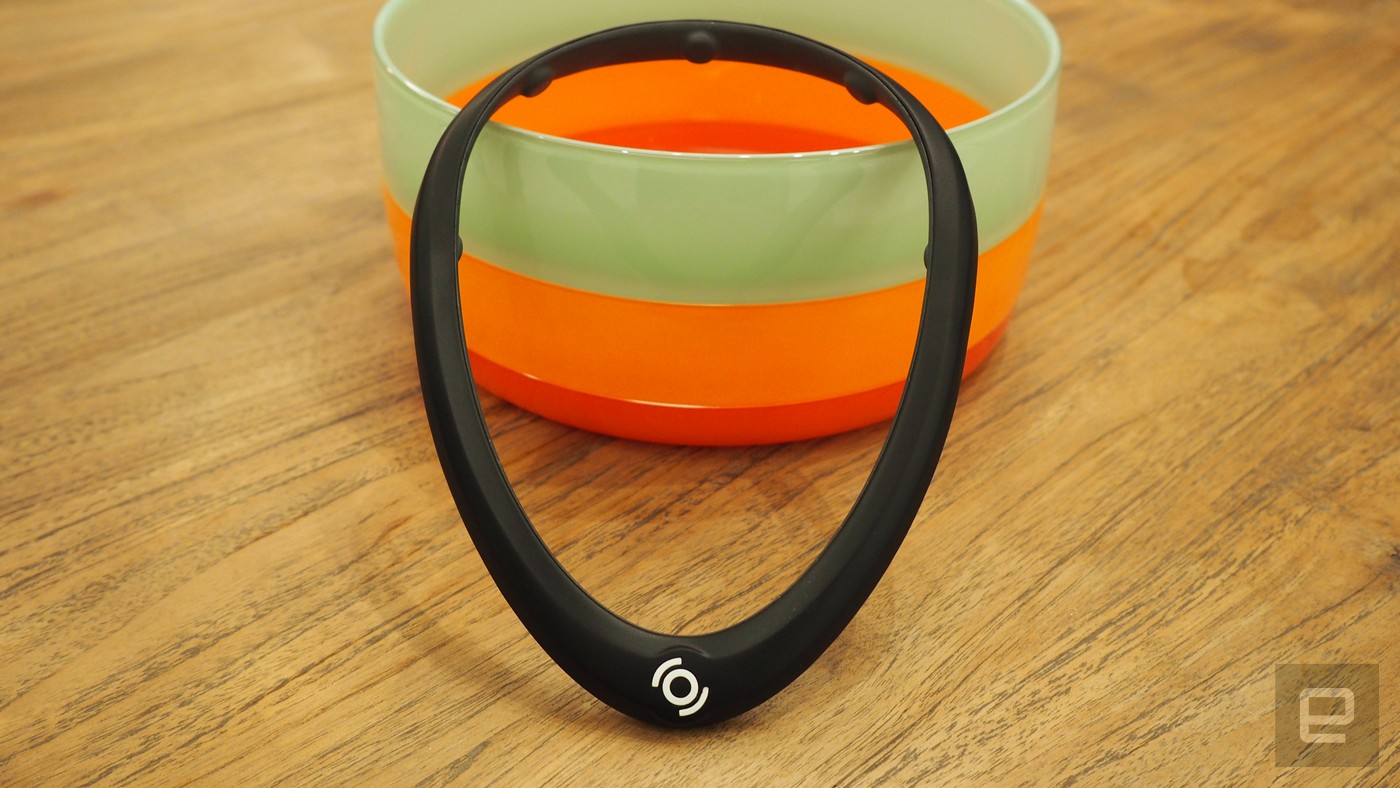 If you don’t play Counter-Strike or League of Legends sit tight — new titles will be added before the device launches in September of next year. But if you’re already sure you need an in-game “spidey sense,” the Arc hits Kickstarter today for $150, with backers getting first priority to suggest more games — whether it’s their favorite FPS, MOBA or something else entirely.