Liquid. That’s the best way we can describe the smooth, sensuous lines of Huawei’s new Honor 8 phone, which the company unveiled at a press event in San Francisco tonight in dark blue, black and white shades.

Honor is the Chinese company’s sub-brand, one that tends to — but doesn’t necessarily always — sell phones at lower prices than other Huawei lines. (One good example: the Honor 5X came in cheaper than the similar Huawei-branded GX8 at launch.)

The Honor 8, whose glossy, reflective coating channels Samsung’s Galaxy S6 and S7 phone design, is essentially a rebranded Huawei P9, a phone released last spring with two rear cameras. While the Honor 8 shares the dual camera and some unique gestures you can initiate with your knuckles, it does’t have the same Leica branding that the P9 does.

We’ll soon take the two 12-megapixel rear shooters on a head-to-head bout with the P9 to see just how the Huawei camera compares to P9’s lofted lenses.

Where and when to get it As of now now, the Honor 8 has been announced for China, the US and Europe.

In the US, you can pick up the 32GB variant for $400 and the 64GB version for $450. Pre-orders run from August 17 through September 3 and you get a $50 gift card for your efforts. You can pick up the phone at HiHonor.com, Amazon, Best Buy, B&H and Newegg. If you want that bright blue color, though — and it’s a nice one — you’ll have to get it from Best Buy for the first two months. After that, it’s fair game.

Only the 32GB version is available in the UK, where it costs £370 direct from Huawei, or from Amazon, where it’s bundled with a free Amazon Fire TV Stick worth £30. If you want to buy it as part of a phone contract, Three has the exclusive.

Prices are yet to be announced for Australia, but the US prices convert to roughly AU$525 and AU$590.

We can tell you that the 5.2-inch Honor 8 is comfortable to hold and pockets well, although its shiny surface smudged up fast. While we do like the size, the 1,920×1,080-pixel resolution is bright and detailed but not as sharp as the 2,560×1,440-pixel screens found in top Samsung, LG and Motorola phones. However, that matters less if you aren’t using a phone for VR, and resolution also matches up with our favorite midprice phone of the year, the OnePlus 3.

Huawei phones keep a fingerprint sensor on the back. Since this is a smaller device than the much larger Nexus 6P, it’s an easier target for those of us with smaller hands to reach. 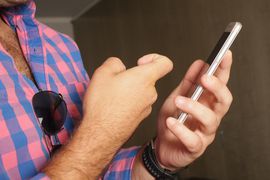 Wild! Drag your knuckle on the screen to launch apps.

Even better, the fingerprint reader includes a “smart button” feature that turns it into a programmable button you can use to launch specific apps. You can map it to launch three different apps when you tap, double-tap or long press the sensor. It’s a really nice perk the Honor 8 has that the brushed-metal P9 did not.

However, this Honor 8 does carry over a previous feature to knuckle down on the screen. Really. Double tap the display with your knuckle to snap a quick screenshot, or double tap it with two knuckles to begin recording the screen. (Knock, knock!)

You can also use your knuckle to draw a “C” to launch the camera app, an “E” for email and “M” for music — though the latter are sometimes more trouble than they’re worth. We’ve seen it previously on the Mate 8 phone, but it’s the first time their knuckle actions will come to the US. 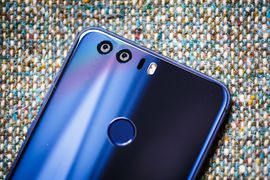 Two lenses working better together could add depth to your photography.

Let’s get back to those dual cameras, shall we? One lens is monochrome and the other is RGB. Huawei says the two work together to make photos more vivid and detailed. AKA, you become more of a photo genius and the envy of your peers. Both cameras together can also change the depth of field to give your shots more of the professional look usually associated with DSLR cameras. For a black-and-white effect, you can switch to a monochrome mode.

So far, we know that the Honor 8 uses the same Sony IMX286 sensors as the P9. We’re trying to confirm if the Honor 8 also uses the P9’s lenses.

Meanwhile, an 8-megapixel camera sits on the front with a flash that doubles as a notification light. So far, our test shots looked pretty good — but we’ll be taking many, many more.

Read more from Reviews
Reviews
← Should you get Device Protection insurance for your Pixel?
Samsung Owes Apple $120 Million in Longstanding Slide-to-Unlock Lawsuit →