Pebble 2 review: An affordable smartwatch with a fitness bent

Pebble is in a tough spot. Once a pioneer in smartwatches, it now has to fight off competition from brands like Apple and Samsung, as well as more affordable devices, even ones that feel more like fitness trackers. Earlier this year, the company unveiled a pair of new smartwatches designed to occupy that middle ground. They are the Pebble 2 and the Pebble Time 2, both of which retain much of the same functionality as previous-gen Pebbles, but with one key difference: They now have built-in heart rate monitors. Combined with a revamped Health app, the Pebble line is much more fitness-focused than before.

At $129, the Pebble 2 is the more affordable of the two, and it’s aimed at those who want a no-frills smartwatch with some workout features. Think of it as a fitness tracker with basic smartwatch functionality thrown in — and priced for people who don’t want to spend “smartwatch money.”

If you liked the design of the original Pebble, then the Pebble 2 should strike your fancy as well. Its black and white e-paper display, plastic housing and silicone straps are reminiscent of the company’s first-ever wearable, which debuted in 2012. Some might appreciate the retro design, but I have to say I’ve outgrown it. The original Pebble probably looked sleek four years ago, but in 2016 the monochrome screen feels dated, with the complete package giving off a Fisher-Price vibe.

That said, there are a few differences that set the Pebble 2 apart from the original. While the screen still measures 1.26 inches across, the surrounding bezel is much thinner than before. The result is a slimmer, more streamlined look, with a chassis that measures 39.5 x 30.2 x 9.8mm. The strap itself also feels softer and more pliable than the original. It’s comfortable enough to wear for a full workday and even to bed. Also, instead of a plastic coating on top of the display, the Pebble 2’s screen is now covered in a more durable Corning Gorilla glass.

And, of course, when you flip the watch around you’ll see the built-in heart rate sensor. By default, it tracks your resting heart rate every 10 minutes. It can also monitor your beats per minute consistently throughout a workout, which is useful if you have a target heart rate in mind for your cardio sessions. Also on the rear are the magnetic charging pins that doubles as a smart accessory port for a variety of third-party “smart straps,” which add more functionality like wireless charging and NFC payments. Speaking of straps, there are two quick-release triggers allowing you to easily swap out the default silicone ones with any other 22mm band.

The Pebble 2 has the same button layout as its predecessors; there’s a back button on the left and a trio of keys on the right (more on that later). As far as internals go, the Pebble 2 is pretty similar to the original Time, which came out last year. It has a built-in microphone for voice replies and notes; an accelerometer; and a backlight, which you can enable by just moving the watch around. It’s also water resistant up to 30 meters, so you can take it for a swim. 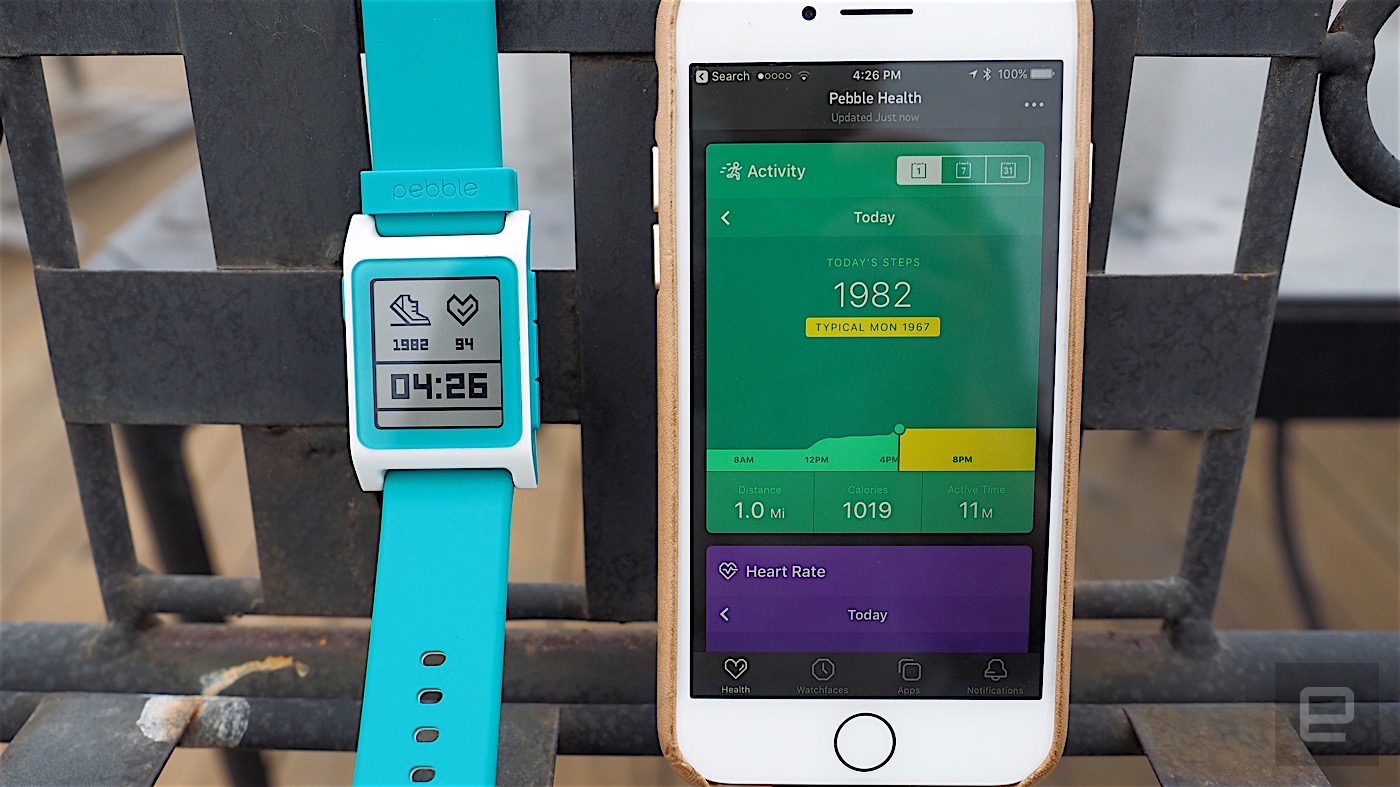 As with all of Pebble’s previous watches, setup is easy. Download the companion Pebble app, pair it with your phone just like you would any other Bluetooth device, and away you go. From there, you’ll use the app to do pretty much everything, like adding watchfaces and configuring notifications. Seeing as how the Pebble 2 is one of the first to support heart rate activity, I recommend trying a watchface that’s able to display that information.

When Pebble introduced the Time last year, it also unveiled a new interface, dubbed the Timeline. The idea was that you would navigate through the watch in chronological order; the top button would lead to past events while the bottom one would give you a heads-up on upcoming stuff. Going in the past, for example, would bring up the score for last night’s baseball game, while going into the future would tell you what the weather forecast was going to be like the next day.

With the latest Pebble software update and the company’s recent emphasis on health and fitness, that interface once again feels different. From the watchface, the top button leads to a quick view of your health stats (step count, hours slept and current heart rate). The center button launches the app menu, while the bottom key shows current and upcoming events. Each button can also be mapped as a quick launch key to any application you like. Simply press and hold on them to trigger the appropriate shortcuts. 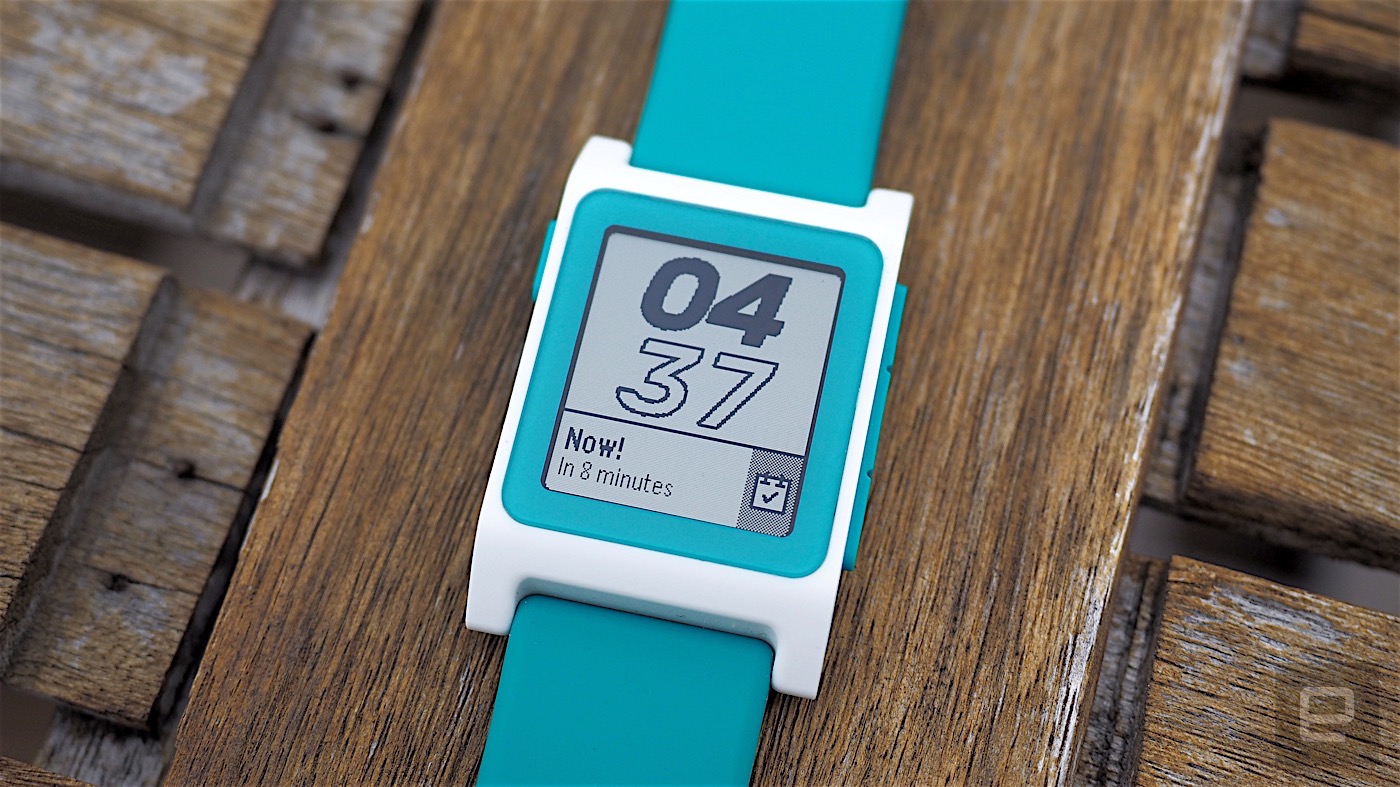 Another addition to the Pebble interface are “Quick View” notifications that offer pop-up peeks at upcoming events. By default, these reminders appear 15 minutes prior to the event, but you can adjust that in the settings.

In addition, as you’d expect, the Pebble 2 comes with a few pre-installed apps. They include a Workout app that tracks your heart rate when you’re on a run, walk or any other kind of workout. Other stock programs display the local weather, music controls, an alarm clock, stopwatch and a timer. You can also choose from over 15,000 different third-party watchfaces and apps in the Pebble app store. Additionally, if you don’t want to be bothered with notifications for a while, you can enable a do-not-disturb feature called Quiet Time.

By default, your Pebble will receive every single notification that your phone gets. If that sounds like too much, you can always disable notifications from the Pebble app. Also by default, text and email replies aren’t enabled. So if you want the ability to respond to messages from the watch, you’ll have to switch that on in settings. Speaking of the sort, you can either send a canned response or you can hit the voice button to dictate a speech-to-text reply — features you’ll find on other watch platforms too. 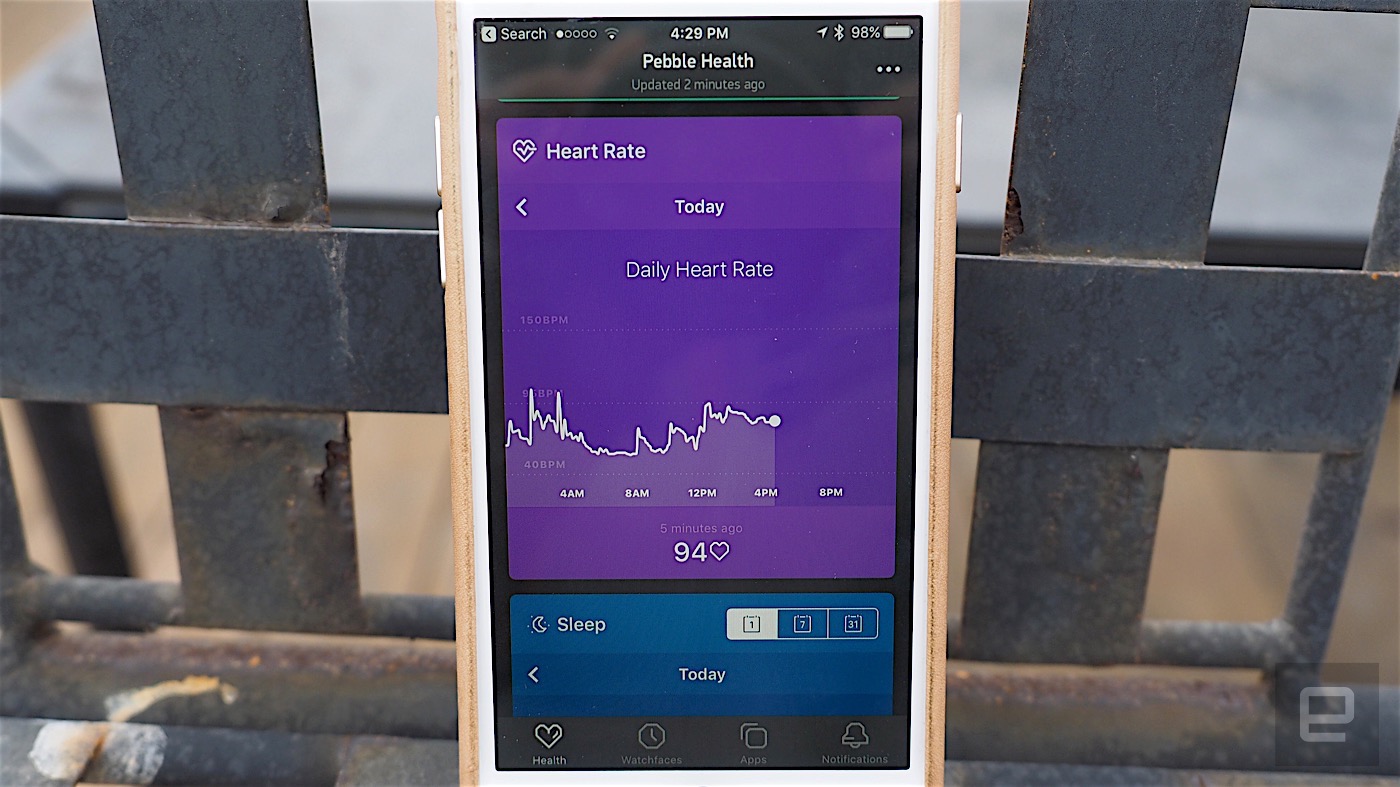 The biggest change to the Pebble app since we last tested it is the addition of that aforementioned Health tab. There you’ll find an overview of your steps, heart rate and sleep habits. The activity module displays your steps taken, calories burned, distance traveled and active time over a day, week or month. The heart rate module includes a graph of your heart rate throughout the day, while the sleep section shows how many hours you’ve slept in a given day, week or month. It’ll also tell you how many of those hours counted as “deep” sleep.

I’ve used the Pebble 2 for five days so far, and during this period I’ve found that the watch does a good job keeping track of the number of steps I take in a given day, as well as the quality of my sleep. I have a fairly erratic sleep schedule — I might sleep four hours, wake up, stay up for a couple hours, and then sleep for another four hours — and the watch was able to track that odd behavior pretty accurately. I also really liked that it was able to automatically detect when I was working out without me having to launch an app or hit a start button.

The Pebble 2 has a rated battery life of up to seven days, which seems about right. I last charged it five days ago, and despite a slew of app, Slack and email notifications, it’s still holding strong at 30 percent. Not too shabby. 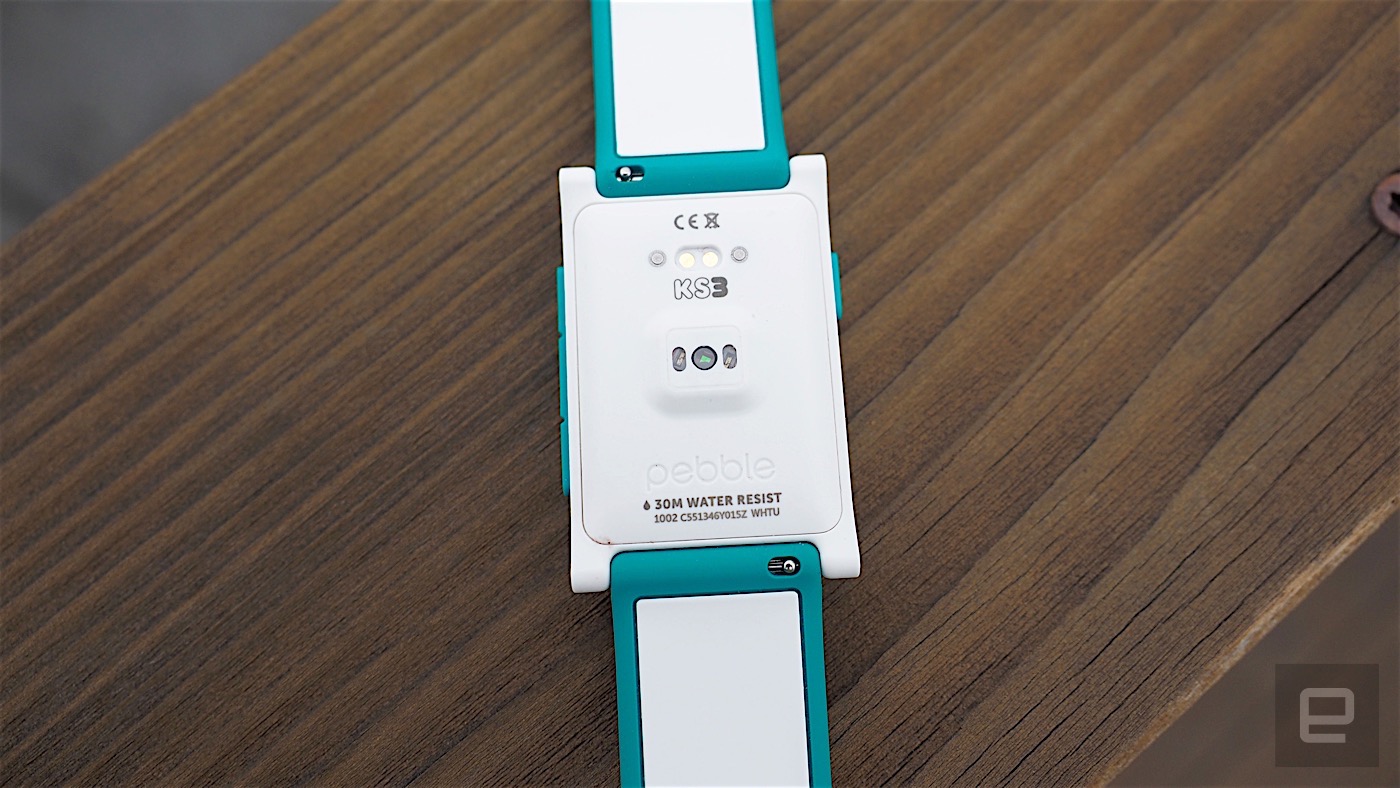 With its plastic exterior and simple features, the Pebble 2 doesn’t measure up to high-end smartwatches like the Apple Watch Series 2, Series 1 or the Moto 360 Sport. But that’s OK, because it’s nowhere near as expensive either. It’s priced at $129, while the other two start at $369, $269 and $200, respectively.

Compared to fitness trackers too, the Pebble 2 is fairly priced. The Fitbit Charge 2 offers many of the same features, but costs $150. The Fitbit Blaze is priced at $200, though it has GPS, which the Pebble 2 doesn’t. The discontinued Basis Peak was also priced at $200, and probably came the closest to the 2 in terms of features. If you want a more serious fitness tracker, you’d do well to look at the $200 Garmin Vivosmart HR+, which includes a heart rate monitor and GPS, support for basic notifications, and various other workout-related features that Garmin is already known for. But the Pebble 2 trumps all of these trackers as a standard smartwatch in that it offers a much wider selection of third-party apps.

To address the lack of GPS, Pebble will be offering a separate device called the Core early next year. The Core is essentially a runner’s companion for your Pebble smartwatch. It packs GPS and a 3G modem, so you can stream Spotify on it while you’re running, no phone required. The Core will cost $99, so a Pebble 2 and Core combination would ring in at $228. But since it adds those extra features, it could be worth it for some.

Yet, perhaps the Pebble 2’s biggest competition is Pebble’s other upcoming wearable, the Time 2. That offers the same features as the Pebble 2, except it adds a color screen, stainless steel body and a generally more stylish design. It’s worth noting that at $199 the Time 2 costs $70 more, but to my mind that’s worth it for a watch that’s infinitely better-looking. Even though Pebble already offered support for several popular health apps, the Pebble 2 is the company’s first genuine attempt to make a more fitness-friendly device. The ability to track your heart rate, plus the addition of Pebble’s new Health app, makes it so much easier to not only track your daily step count but also your passive heart rate and sleeping patterns. As long as you can put up with its unsophisticated design, the Pebble 2 combines the benefits of a fitness tracker with the core functions of a basic smartwatch at a reasonable price.