Between Oakland and San Francisco in the center of the Bay Bridge lies the 400-acre man-made Treasure Island. It’s here that DJI let Engadget fly its compact Mavic Pro drone. It’s DJI’s first fold-up flying machine — arriving barely a week after GoPro announced the Karma — and it continues the company’s commitment to keeping cameras in the sky.

Like the GoPro Karma, the $999 Mavic Pro ($749 without controller — it can also be flown with a phone) is a foldable drone designed to fit in a backpack or large purse. The arms and propellers tuck in to turn Mavic into something that resembles a shoe box. Clearly drone-makers have realized that lugging a suitcase (or very large backpack) to a location isn’t ideal. The trick is making sure these smaller, pliable aircraft still deliver the goods.

During our test flight the Mavic handled much like the company’s Phantom line. That is to say, it’s responsive, agile and in Sport Mode can soar at speeds of up to 40 miles per hour (slightly slower than the Phantom 4’s 44 MPH). 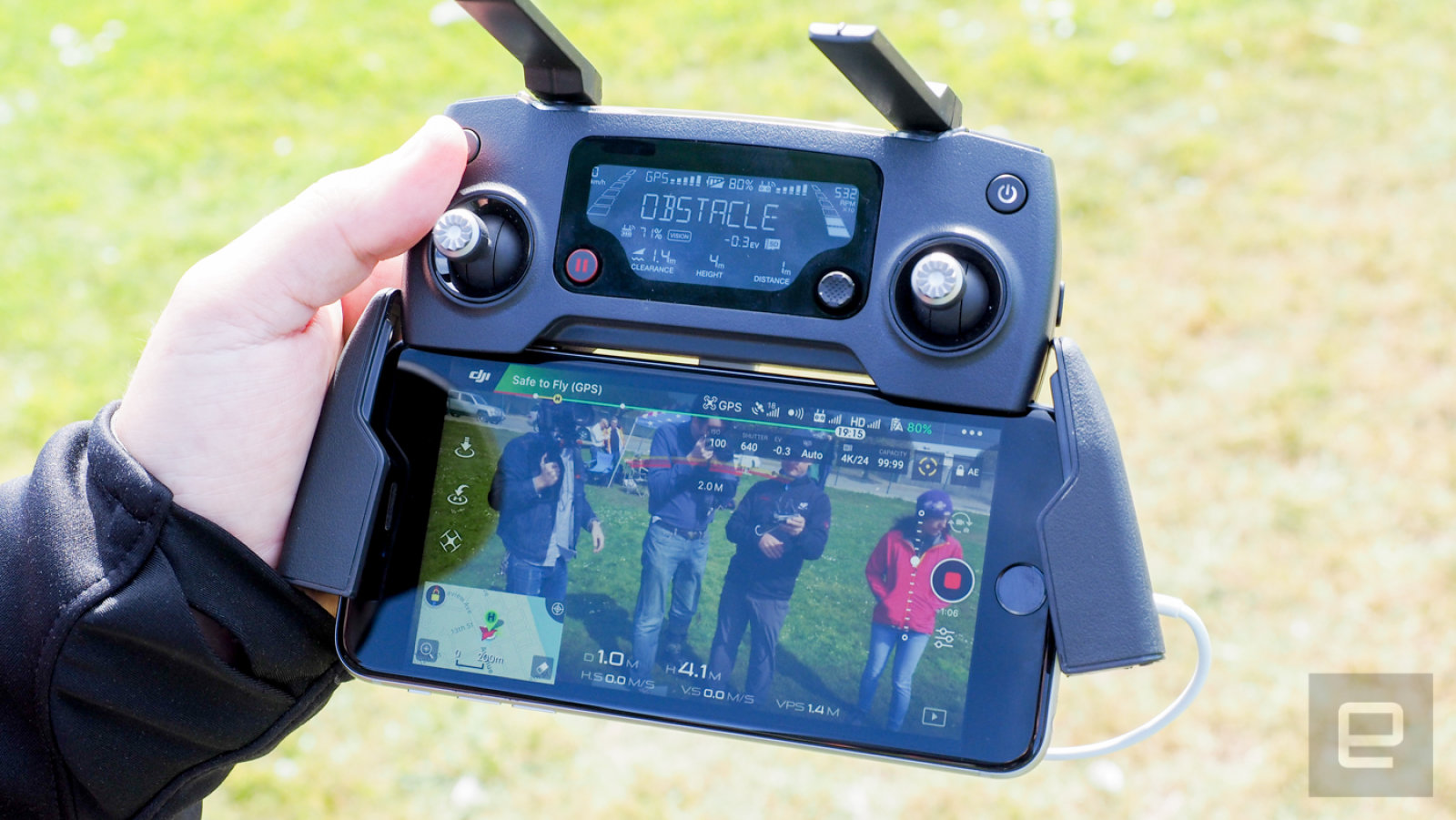 Mavic Pro also ships with a foldable controller that promises an encrypted 4.3-mile range, with support for 1080p streaming to an attached smartphone. This, in turn, can stream to Facebook Live, Periscope and YouTube via the DJI companion app in the same way Phantom-series drones do. We were unable to test the live social media streaming or the range of during our flight, but noted that latency between the Mavic’s camera and the display on the iPhone was nearly non-existent.

The Mavic Pro can be flown with the controller, of course, or just a smartphone (or as we tested, a combination of the two). The latter is the preferred method if you want to use the drone’s advance features like ActiveTrack, Gesture mode and TapFly. Both ActiveTrack and Gesture require the drone to recognize a person which during our tests didn’t always happen right away. These features are actually part of the app, which means they’re the same you’ll find on the Phantom drones or Osmo handhelds.

Once the drone locked on to someone with ActiveTrack, it followed them as they ran and walked around the field. Using on-screen controls, pilots can pivot around the person which is cool, if you want more than just the back of someone’s head in your video. Gesture mode (or selfie mode) was less exciting. While the Mavic is following a person they can make a “camera” gesture in front of their head to start the countdown to a selfie that’s indicated by the device’s flashing lights. 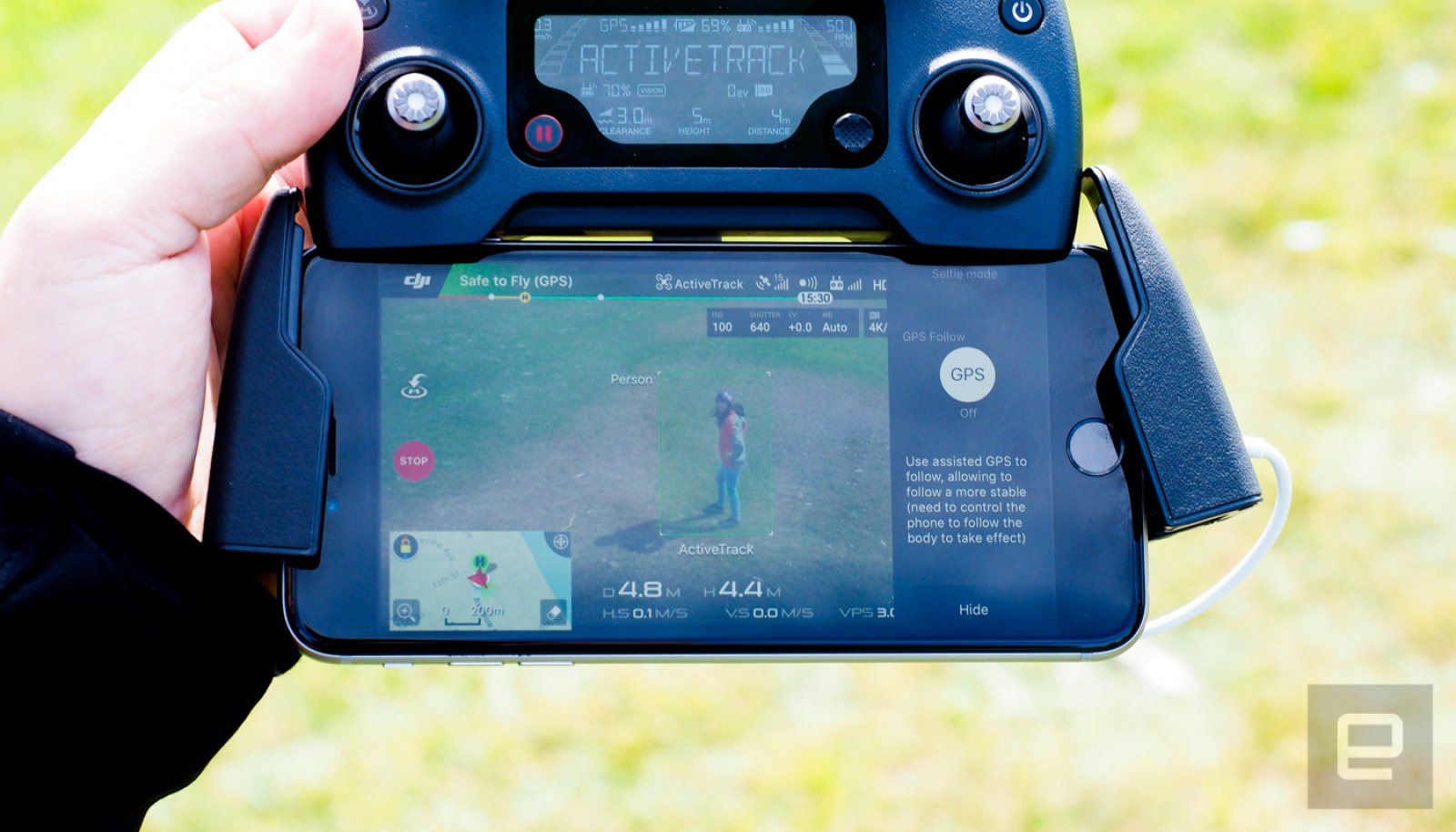 It’s difficult to make the gesture while holding the controller, so we placed it on the ground to enable the feature. Then afterwards we learned that you can’t take a selfie while also shooting video. The controller has a photo button on it; it seems it would be just as easy to just push that. But you know, selfies.

To get all those magic video and photo moments the Mavic shoots 4K at 30 frames per second and 1080p at 96 fps. The 12-megapixel camera can also snap in both portrait and landscape mode. This is possible thanks to the three-axis gimbal. With the controller, pilots can adjust where the camera is pointed independent of the drone’s flight path. The movements are smooth. During our flight, there were winds of at least 14 miles per hour but the photos and videos were void of jitters and shaking.

For pros and newbies alike the obstacle avoidance tech is on point. I was unable to get it to run into Kyle, Engadget’s video guy, despite my best efforts. While testing the TapFly feature — tap on the screen and the drone flies there — it avoided flags that were in its path. The controller also has haptic feedback that will warn you when you’re getting close to an object. DJI notes that if you put it in Sport Mode, you’re on your own when it comes to keeping the Mavic from hitting stuff. As for keeping the Mavic in the sky, DJI says the drone’s batteries will last 27 minutes. That’s more than the usual 20-minute claim made by many rival devices. Of course, the runtime will be shorter if you’re flying around in Sport Mode. If you do find yourself needing more time, additional batteries cost $89. DJI is also offering a “Fly More” combo for $1,299 that includes the $999 Mavic Pro, two extra batteries, extra propellers, a charging hub, adapter, car charger and a shoulder bag.

As for the flight itself, the Mavic was easy to pilot, and using the controller a better experience than on the Phantom series. If the mission was to make something that’s powerful, small and easier to use, it looks like the company achieved that. The question is whether Mavic is intended to replace the similarly priced and very popular Phantom 3 (which doesn’t have obstacle avoidance), or if this is designed to go after a different customer.

For the price of a Mavic, you can also get GoPro’s Karma, plus the Hero5 Session. The Karma might not have some of the smart features, but with its detachable camera rig, Karma Grip and all-in-one controller (built-in display) shoppers will have to decide between the flexibility of a removable camera, and bonus hand-held stabilizer, or the ability to follow targets and, well, potentially not hit things.

The DJI Mavic Pro is available for pre-order now and will ship in mid-October.