IMThe cameras in our smartphones are extremely versatile, to the point that many have ditched point and shoot cameras altogether, just because the performance and robust features set in smartphone cameras have exceeded their dedicated counterparts. Ironically, camera makers have been fighting back and have attempted on many occasions to encroach on the smartphone’s territory by coming out with eccentric accessories that try to deliver those DSLR-like qualities to smartphone cameras – like wide angle lens attachments, and even those dedicated lens modules that connect via Wi-Fi Direct. The problem with many of them is that they don’t necessarily attach seamlessly, often requiring unsightly tethers of some sort.

And then came the modular phone, which we’re inclined to say that Lenovo has perfected with its latest line of Moto Z smartphones.

The concept is brilliant with Moto Mods, as these accessories provide expanded functionality to smartphones. In fact, the latest one is a prime of example of how a renowned camera maker is once again fighting back for recognition by fashioning on a feature that’s not widely available to smartphone cameras – the optical zoom, for added range to get closer to shots.

The Hasselblad True Zoom is an attachment that adds a 10x optical zoom range for any of Lenovo’s Moto Z line of smartphones that are Moto Mods compatible, so think the Moto Z, Moto Z Force, and Moto Z Play.

Camera ergonomics in a smartphone

Attaching the Hasselblad True Zoom is a cinch, seeing that all that’s needed is to align the corresponding pins on the Moto Mod to those that are on the phone. Once that’s done, the magnetic connection ensures a tight grip, so that it can’t be easily removed by accident. When it’s attached to a phone, a Moto Z Play Droid in this instance, there’s no hiding the girth that’s tacked onto the phone in the process. It’s a beastly looking thing, making the phone’s overall thickness triple in size!

The beauty in Moto Mods, though, is that they don’t always need to be attached – only when a particular situation arises. Aesthetically, the Hasselblad True Zoom follows the styling of a traditional camera with its rubbery textured grip, Xenon flash, zoom controls, dedicated shutter key, and focus light assist. When it’s attached, it can be mistaken for a camera – not a smartphone with an accessory connected to it. The hefty size makes it impractical to discretely hide away in our pockets, but again we can’t stress enough about how Moto Mods are here for the convenience of the situation.

Our only qualms with the design is that it still lacks some controls and other conveniences we find in traditional cameras – like a tripod mount, a spot for a lanyard or something, and a ring control of sorts for manual focusing. These omissions indicate that the Hasselblad True Zoom isn’t necessarily targeting enthusiasts. Don’t get us wrong, the design is solid and super sturdy, but we would’ve liked to see more from a photo-centric accessory. 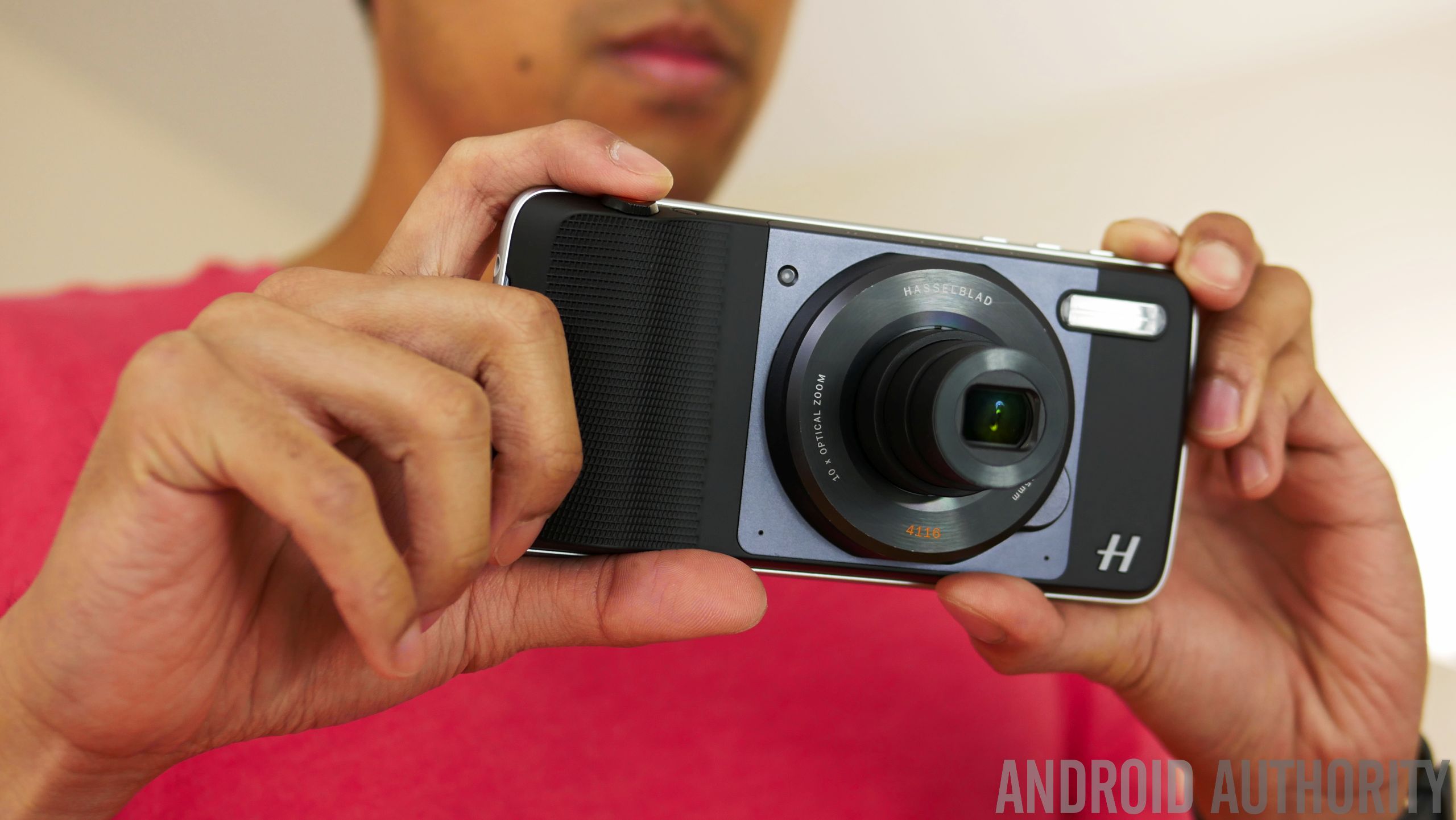 The specs are camera-phone caliber

Okay, we know what’s most outstanding about the Hasselblad True Zoom – its 10x optical zoom, which is something that few phones can attest to offer. Beyond that, and as we uncover its specs, it becomes more evident that we’re still dealing with specifications that are camera-phone caliber. Sorry folks, don’t think that it comes with a large sensor to match those found in today’s mirrorless or DSLR cameras.

Specifically, it features a 12MP 1/2.3″ BSI CMOS sensor with 1.55um sized pixels, f/3.5-6.5 aperture lens, OIS for still shots, EIS for video, 2 microphones, Xenon flash, and up to 1080p video recording. The sensor size alone isn’t something worth bragging about, since there are phones out there, like the Panasonic CM1, that have even larger ones. And another glaring thing about the specs is how it tops out at 1080p resolution for video, which is a shame given that 4K is increasingly being adopted into mid-range phones, not just high-end or flagship ones.

Needless to say, the star of the show for the Hasselblad True Zoom is its 10x optical zoom. That’s better than some recent zoom-centric phones like the Asus Zenfone Zoom (3x zoom), so in that respect, there’s a level of versatility in being able to get close to the action – without having to be up close like that, of course. 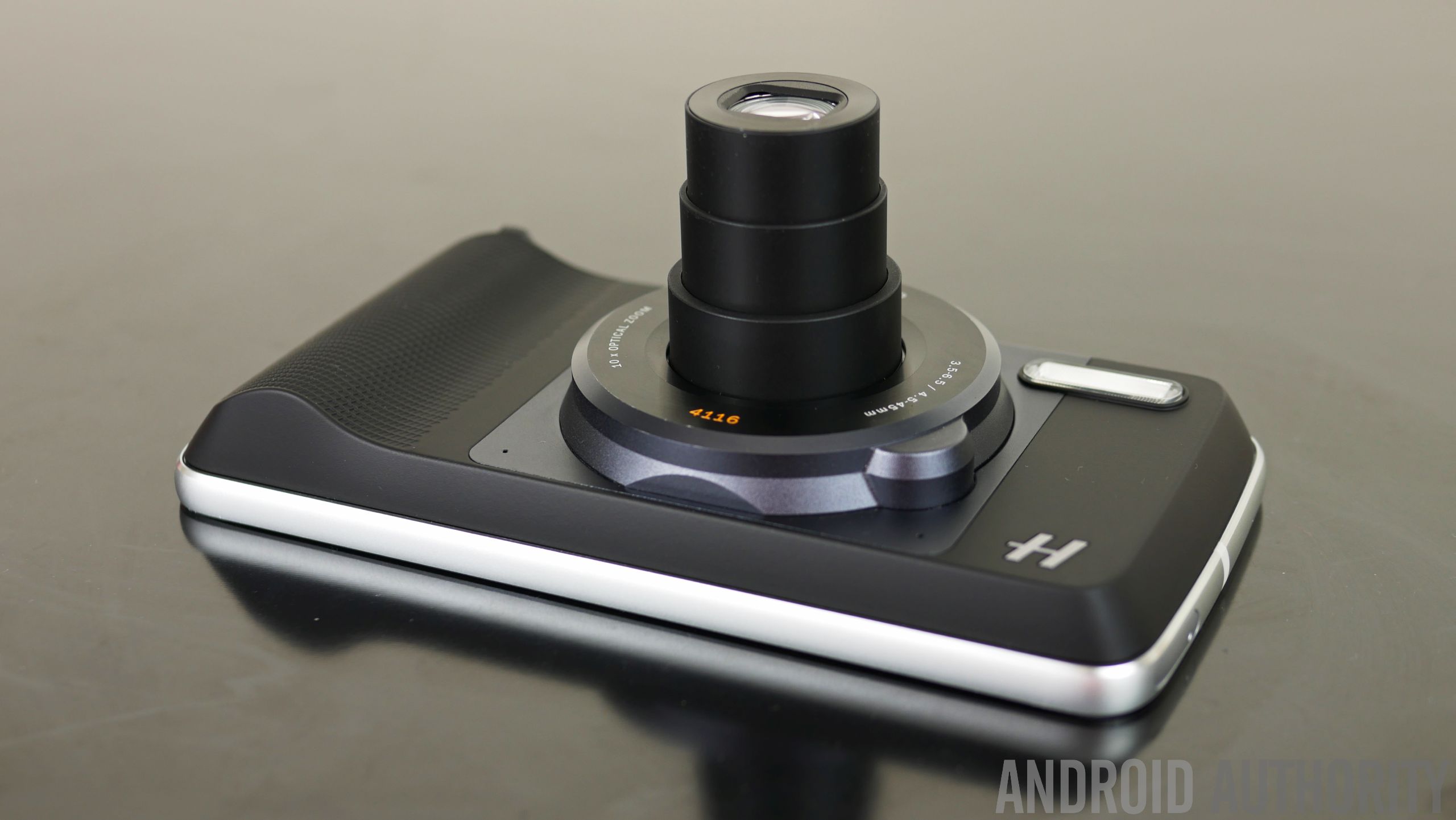 Activating the Hasselblad True Zoom is done by pressing on the dedicated button on its chassis, wherein it proceeds to launch the camera app. Our anticipation about using the Moto Mod is somewhat dashed when we realize that there’s not a whole lot to the camera app that we don’t already have in most phones. Yes, you can snap standard photos, adjust some controls using the manual setting, and even compose a panoramic, but we were expecting more. Instead, it’s lacking on some much-needed “fun” modes.

For photos, it’s nice to see that the OIS kicks in when the shutter key is pressed halfway, ensuring that the scene is as steady as possible to snap the shot. OIS really shows its worth the most when the zoom is at its maximum, mainly because even the slightest of movement can cause other cameras to become jittery. With this, however, there’s no concern because the OIS helps to compensate things for a steadier shot.

When it comes to videos, the EIS system in place desperately tries to adjust for the shake and jitter, but we find its approach to be delayed. You can easily see how it’s slower to react to the movements of us panning while walking with some of the footage. Now, this can possibly be attributed to the phone we’re using, a Moto Z Play Droid, since it doesn’t have what many would agree to be the most cutting-edge processor, but we’d be curious to see how it works with the Moto Z or Moto Z Force. That, of course, will depend on whether or not the processing is done by the phone, or locally by the Hasselblad True Zoom. 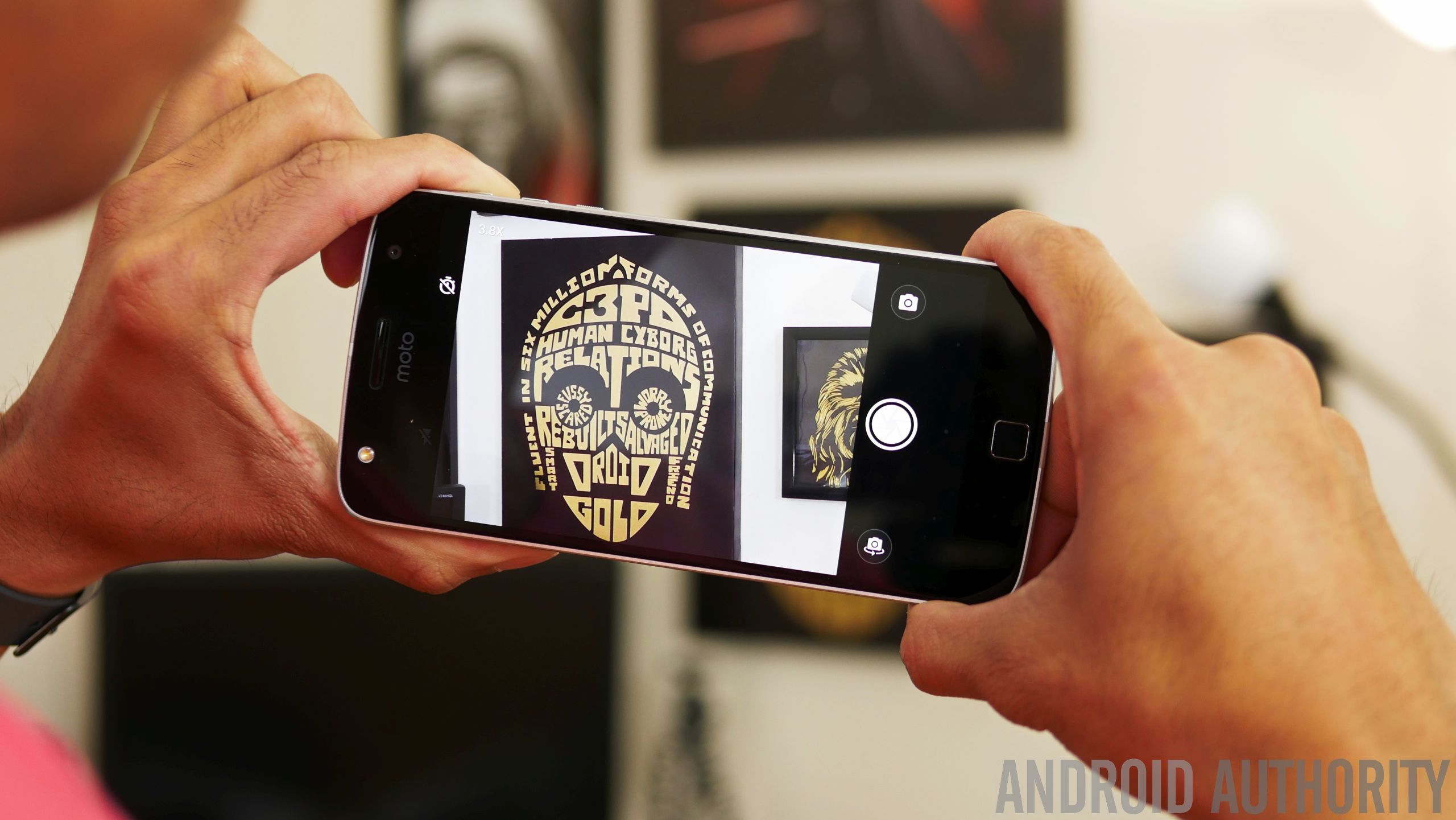 How about the quality?

As we’ve mentioned already, there’s a 12MP camera in the Hasselblad True Zoom – while the Moto Z Play Droid we’re using it with has a 16MP one. Honestly, when it comes to standard shots when the zoom isn’t required, we find the quality of the Moto Z Play Droid’s camera to be superior. You can see for yourself in many instances how there’s more detail in its shots, while the Hasselblad True Zoom has a tendancy to be softer with washed out colors.

This is concerning right from the get-go, given that you’d expect better results from a photo-centric accessory like this. But then again, we’re not too shocked by this revelation because the specs of the Hasselblad True Zoom are very much on par to what we get in smartphone cameras. Obviously, its distinct advantage is its 10x optical zoom, which by itself is the only meaningful difference. 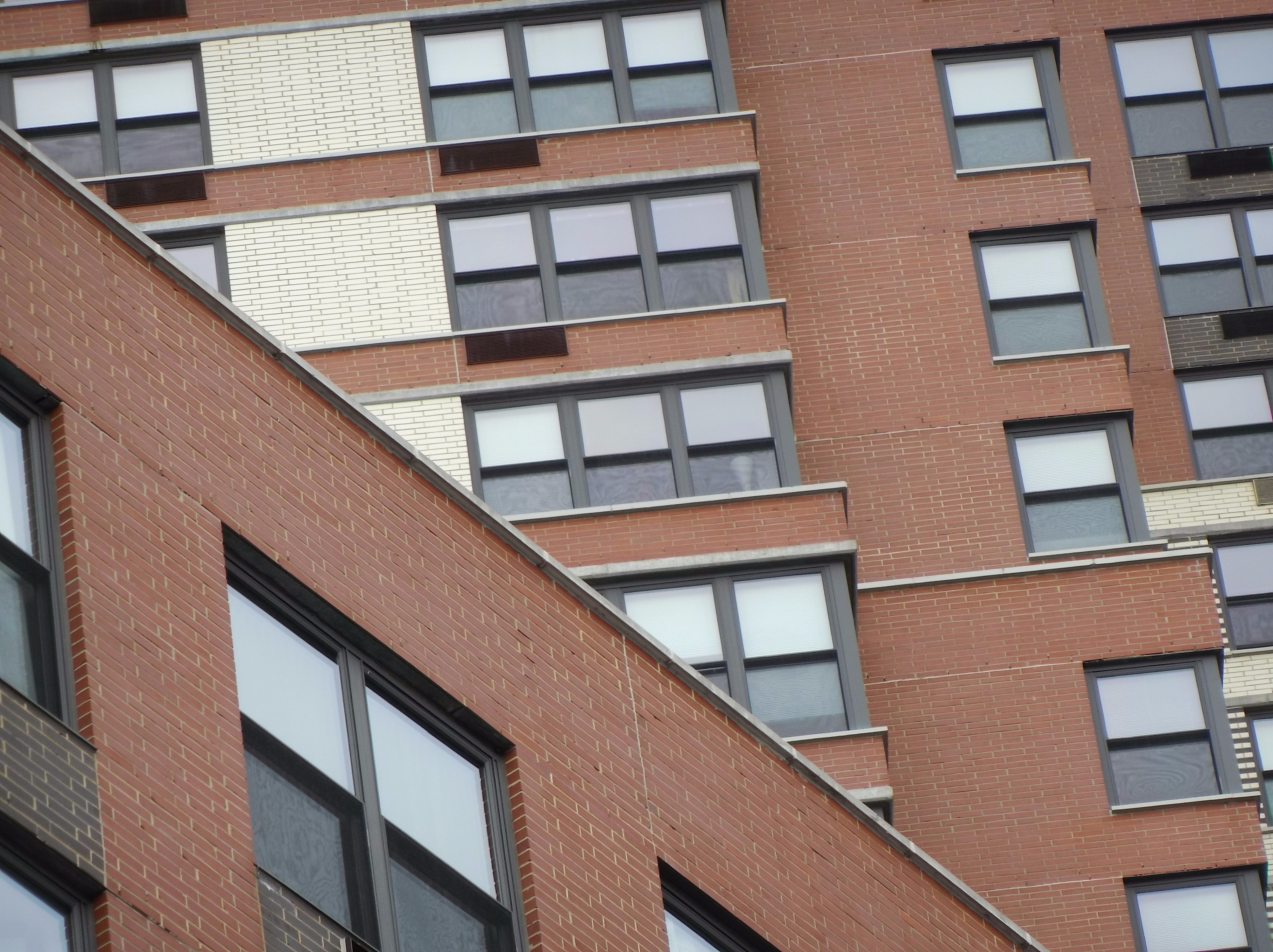 At the end of the day, we can say that the Hasselblad True Zoom is there for the convenience of zooming. Beyond that, however, we really can’t recommend it to replace the cameras in the Moto Z line – just because for standard shots, you get superior ones from the phones. And on top of that, it’s mind-boggling for us to believe that the Hasselblad True Zoom tops out at 1080p video recording. Given the steep cost of the accessory, $250 if you’re buying through Verizon or a crazier $300 from Motorola directly, it faces an uphill battle in validating a purchase for it. Again, its only meaningful advantage is its 10x optical zoom, which few phones offer. The expense is really steep, making it hard for the average Joe to even fathom buying just to achieve such a lengthy zoom, but even worse is that it lacks the necessary tools and enhancements that could potentially entice enthusiasts to buy at that price.