There is no perfect microwave oven, but after two hands-on trials, 75 hours of research, and years of ownership by several Sweethome editors, we’ve concluded that GE microwaves come darn close to the ideal. Our top pick, the countertop model JES1656SRSS, offers all the GE features we’ve come to love. 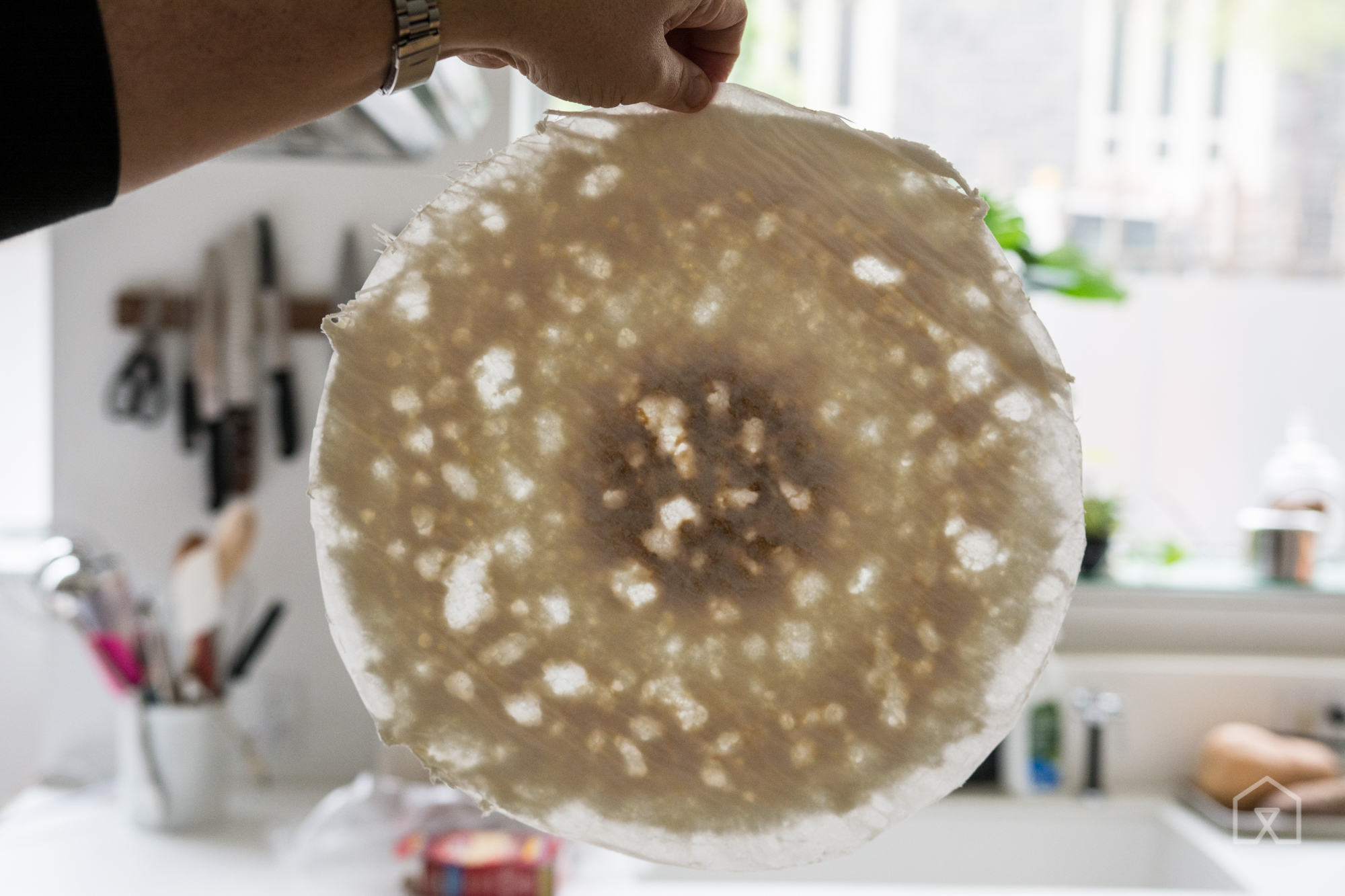 The GE, like all microwaves, concentrates heating in the center of the platter, but it also delivers even heating out to the perimeter. Photo: Michael Hession

First, we created a “heat map” for the microwaves we tested by completely covering each one’s platter with parchment paper and a layer of plain mini marshmallows, and nuked them on high until the marshmallows began to brown. Microwave ovens don’t actually deliver heat to a food item, the way a conventional oven does (via heated air); they work by using microwave energy to cause the water and other simple molecules in food to rapidly vibrate, which generates internal friction at the molecular level, heating the food from within. But the microwaves aren’t delivered evenly, the way heated air in a conventional oven is. Our test showed whether all parts of the microwave got equal treatment.

Next, we “baked” potatoes in the GE and a Panasonic. Baking a potato in a conventional oven takes upwards of an hour, whereas by virtue of that internal steaming, a microwave can cook a family’s worth of large russet potatoes in under 5 minutes; you lose the crispy skin but gain far more in convenience. We followed manufacturer instructions to the letter for this test, cooking a single potato in each oven on each unit’s automatic setting. By luck, both potatoes were precisely the same size: 7.94 ounces, weighed on our favorite kitchen scale; and the GE and Panasonic took nearly the same time to cook them—between 3½ and 4 minutes. When the cooking ended, we cut each potato open and tested for doneness.

Next we attempted to defrost a pack of frozen ground beef—and again, by luck we had test items of absolutely identical size, 1.31 pounds. As with the potatoes, we used the automatic function (the defrost setting, inputting the approximate weight). Here, the GE and Panasonic differed considerably, the former settling on about 11 minutes and the latter about 6 minutes for the same task. Both units gave prompts every few minutes to flip the meat, which we did. When the time was up, we cut apart each block of meat with a fork to test for evenness and completeness of defrosting.

Finally, we made popcorn—basic Orville Redenbacher. Once again, we cooked them using each unit’s automatic setting. We opened each bag of popcorn and smelled, looked, and tasted for doneness versus burntness, then carefully sifted the popped kernels from the unpopped before weighing the latter down to the gram. 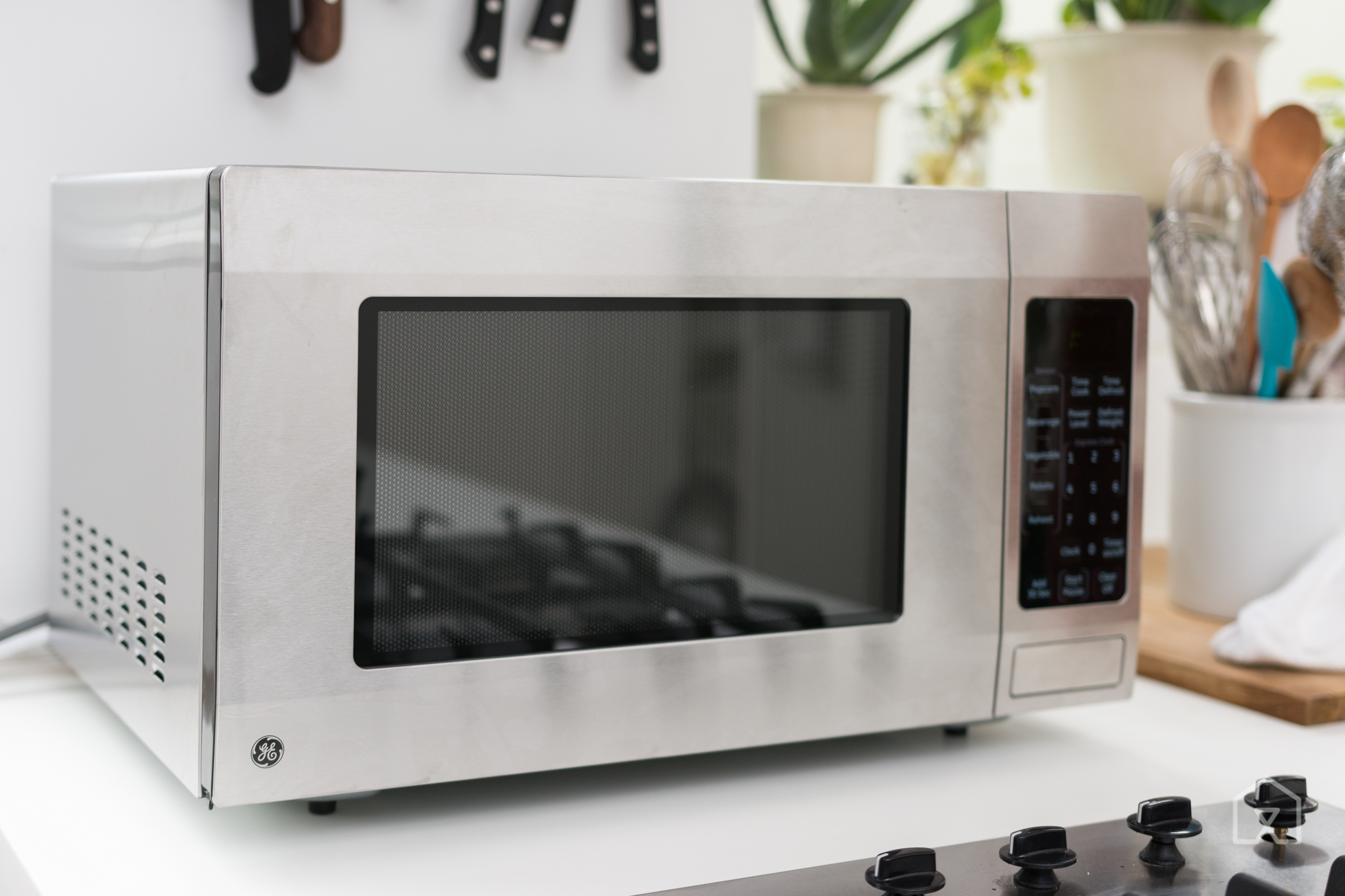 The GE has just about everything you want in a microwave: performance, compactness, and easy-to-use controls. Photo: Michael Hession

The GE JES1656SRSS is our pick for a countertop microwave. It can do a lot of basic, diverse, often-repeated jobs—like reheating a single bowl of soup or “baking” potatoes for a family of four—with the touch of one of its task-specific preset buttons. It also lets you manually set cooking times and power levels with the push of a button or two—basically, it nukes food as easily as flipping a switch—and being honest, that’s how most of us use microwaves. Moreover, it does these tasks well, many of them outright superbly, thanks to a combination of solid hardware and well-engineered software that delivers its ample power efficiently and effectively. But where this microwave—like all GE microwaves—sets itself apart is in its easy, intuitive operation. How intuitive? Wirecutter executive editor Mike Berk has used it happily for over a month, as a replacement for a Sharp, and has never looked at the manual. Neither have I, and I’ve owned and used a fancy-pants GE Profile microwave for nearly three years. 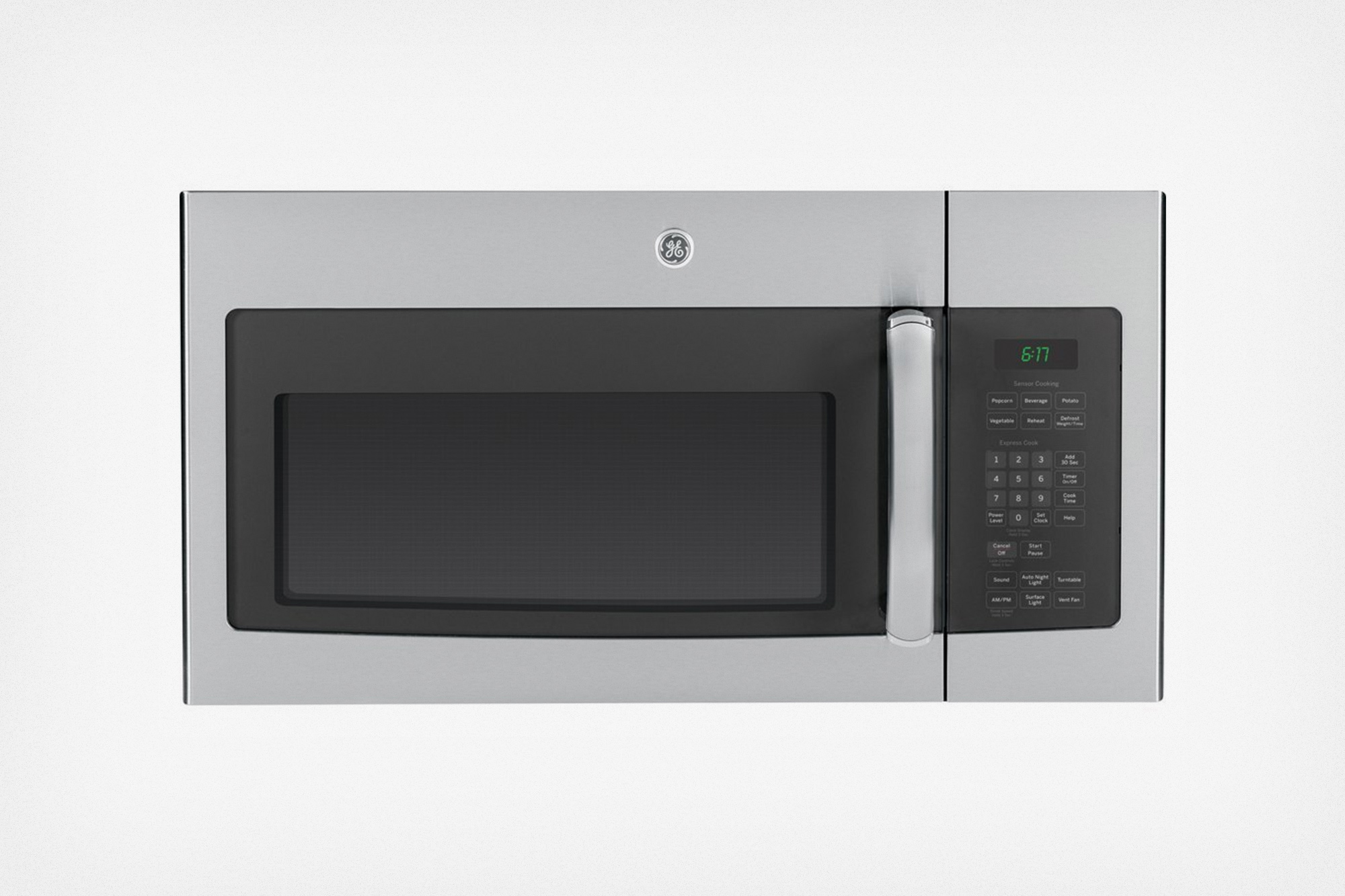 The over-the-range option saves counter space and can help with ventilation.

Over-the-range (OTR) microwaves save counter space, but are an upgrade in terms of complexity (and permanence) of installation, and usually cost more—in this case, currently about $150 higher than our main countertop pick. (Even if otherwise identical to a countertop model, an OTR will always feature a ventilation fan, and that alone adds to the manufacturing cost.) The GE JVM6175SFSS is very similar to our main pick on most specs, albeit slightly less powerful at 1,000 watts (versus 1,150). It has the same terrific, plainly labeled, intuitive interface. Its 300-cubic-feet-per-minute vent fan is not the most powerful (higher-end models generally offer 400 cfm or more), but it will quickly clear most kitchen disasters short of a full-on fire. And with a current suggested price of $330 (for the stainless model; painted models are $50 less) it’s a quality machine at an attractive price. 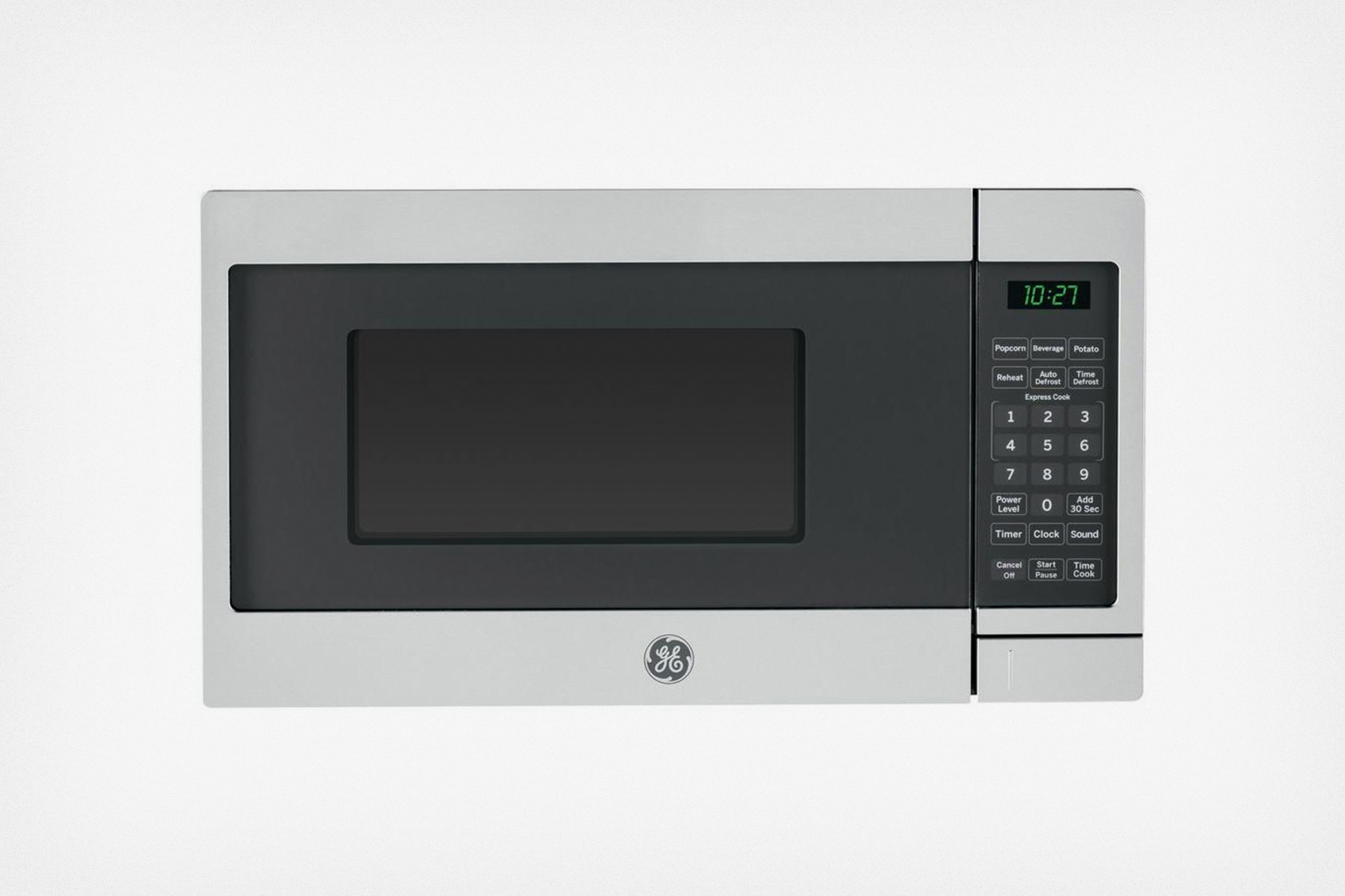 A smaller option—at 0.7 cubic feet—and a lower price than our main pick.

At 0.7 cubic feet (less than half the volume of our main pick) and with a countertop footprint of 10 inches tall by 13 inches deep by 18 inches wide, the GE JES1072SHSS is small in every respect except performance. It gets tremendous reviews from owners—4.8 stars (out of five) across 50 Home Depot reviews—and, just as important, has the same simple user interface as our main pick. It lacks some of the advanced features, and with a 12-by-12-inch cooking chamber, it can’t handle a big casserole pan if you’re feeding a crowd. But for small families or single users, and for basic reheating and cooking tasks, it’s a top value.