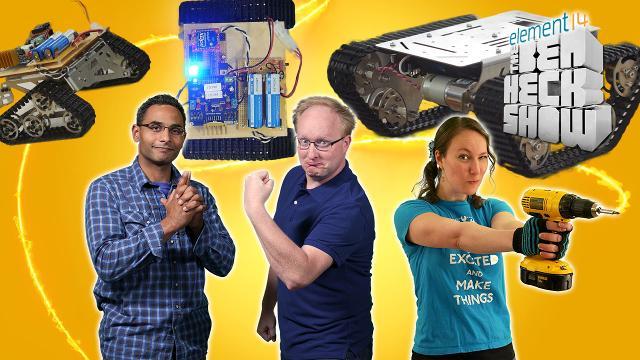 It’s time for the “Hackbotz” to assemble! In this second part of the series, we see the bots being weaponized for ballon destruction. With their experience in thrifty salvaging, The Ben Heck Show team has scavenged parts to enhance their robots. Karen has taken apart a toaster for its warming nichrome resistive wire element, which should result in a popping surprise for Ben and Felix. Meanwhile, Ben develops a scorpian-tail-like weapon, the construction of which doesn’t quite go according to plan. We still don’t know what Felix has in store for his bot, but we do know he’s made the Intel Edison chip work with a Playstation 4 controller over Bluetooth. Find out how the team has put the CEL Robox 3D printer to use as they prepare for the Ultimate and Final battle of the Hackbots. Let us know over on the element14 Community what you think of the bots and how you’d design them differently.