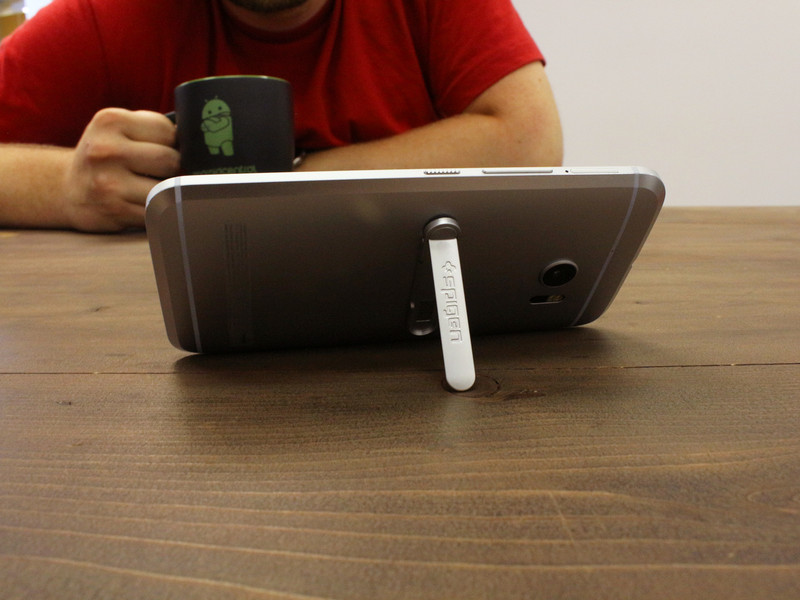 We check out Spigen’s new universal kickstand for your phone!

Spigen is great at pretty much all things to do with phone accessories. Their cases fit exceptionally well, their style ring is one of the most oddly convenient accessories ever, and now they’ve got their U100 Universal Kickstand to try and add to that legacy. But does it live up to Spigen’s reputation?

This kickstand does exactly what it’s supposed to do: it stands your phone up on an angle for hands-free viewing and gaming. Whether it’s well-made or works well is a bit of a different story. 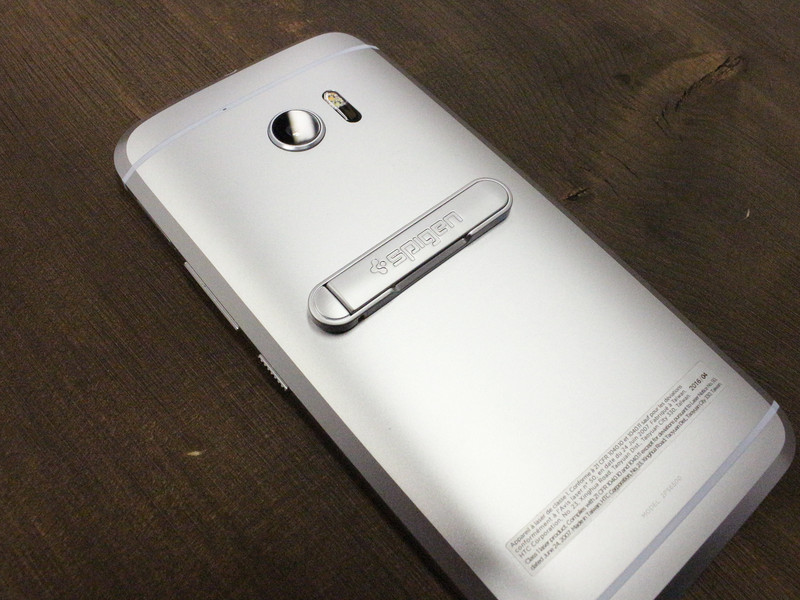 No one wants to admit they’re shallow, but come on: the first thing you notice is how a phone accessory looks. Lucky for all of us, the Spigen U100 Universal Kickstand is a pretty slick little product.

If you have a phone with a metallic back, it looks particularly sexy, thanks to its silver metal composition and compact design. It basically looks like a slightly larger tie clip with the Spigen logo etched into it.

The closer your phone is to the color of the kickstand, the more it blends in and actually just looks like it’s built-in. However, if you use it with a slightly curved phone, like the HTC 10 (like I did), then you’ll notice it a lot more from the sides.

All in all, it’s a sleek and good-looking minimalist accessory that doesn’t scream “cheap” and won’t detract from your phone’s good looks. 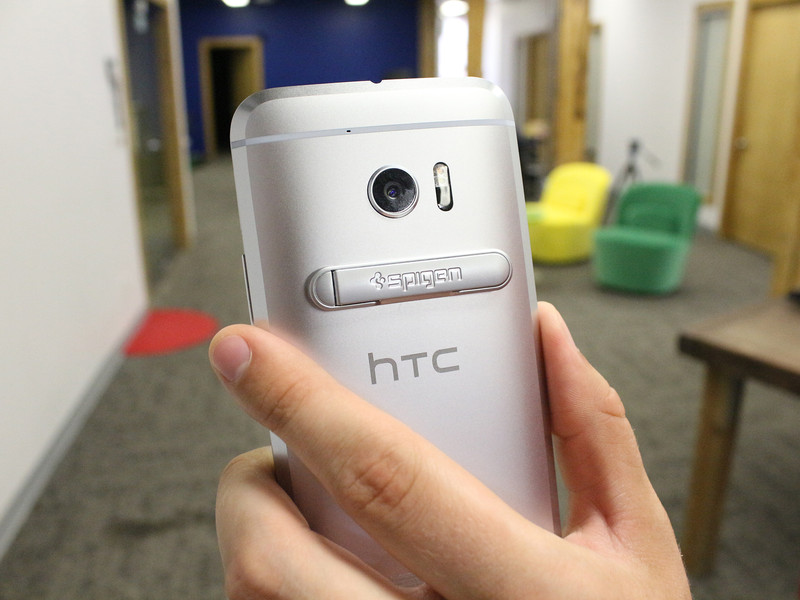 I’ll start this section off by saying that this kickstand is meant exclusively for phones with mostly flat backs. It works with the HTC 10, but I mainly use a Moto X Pure Edition and the kickstand won’t stick at all, both because of the phone’s curvature and its textured back (depending on the customization).

The way the U100 works is via what Spigen calls “one-touch technology” and “semi-automatic spring tension”. Really, it’s essentially a spring-loaded leg that is held in place by a magnet and deployed when you slide your nail under the indentation at the bottom of the stand. If you have short nails, you may have a hard time unlatching the leg.

That being said, the magnet really holds the leg in place nicely; repeatedly shaking my phone, trying to loosen it, did not dislodge it.

When not in use, the kickstand is about 5mm thick, which, depending on where you place it, may make things feel a bit strange when regularly using your phone or taking a call. I situated mine just under the camera lens as Spigen recommends, and gripping it during a call has never felt comfortable.

Be gentle: The stand is thin strip of metal that can withstand almost no pressure.

The adhesive is made by 3M and sticks fairly well, although not as well as the adhesives Spigen was using for their first run of Style Rings (the ring broke before the adhesive let go!). Our recommendation is to make sure you place the kickstand exactly where you want it – constantly replacing it diminishes the stickiness. And if you have it almost in place and try to slide it into better placement, it’ll just move back to where it was; 3M’s adhesive is quite elastic. 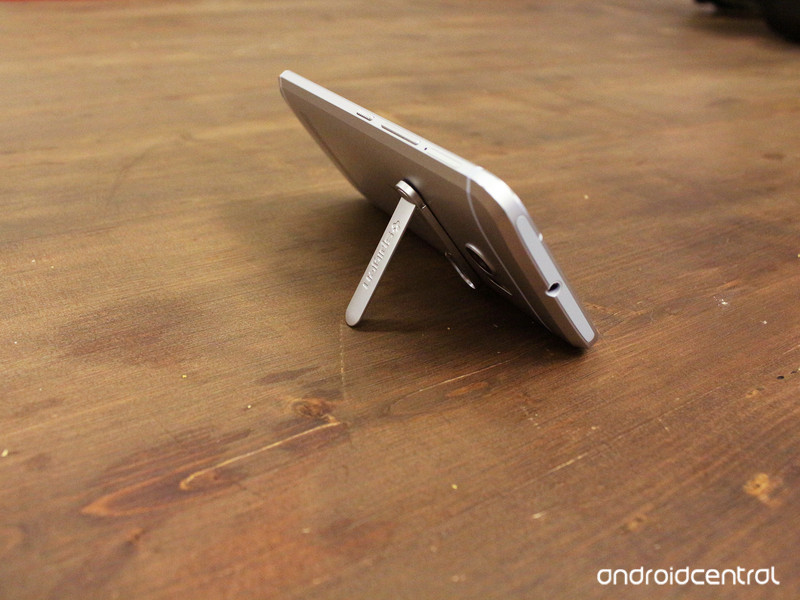 Regarding the metal composition of the kickstand, I’m a little put off. It doesn’t look cheap; it doesn’t feel cheap, but somehow it is flimsy.

I assume you won’t be trying to bend it to test its limits, but when I tried to bend the stand leg on its own, it did so to a point and then just snapped, and it was not difficult to do. When I tested how much pressure I could place on the stand, the leg just snapped right off before I applied as much force as I had planned – the holes that the pins on the leg sit in make for an incredibly thin strip of metal that can withstand almost no pressure.

All in all, the kickstand is fairly well-made, but never pick your phone up by the stand leg or apply too much downward pressure or it will likely snap off in your hand. Also, don’t sit on it. Just don’t. Trust me. 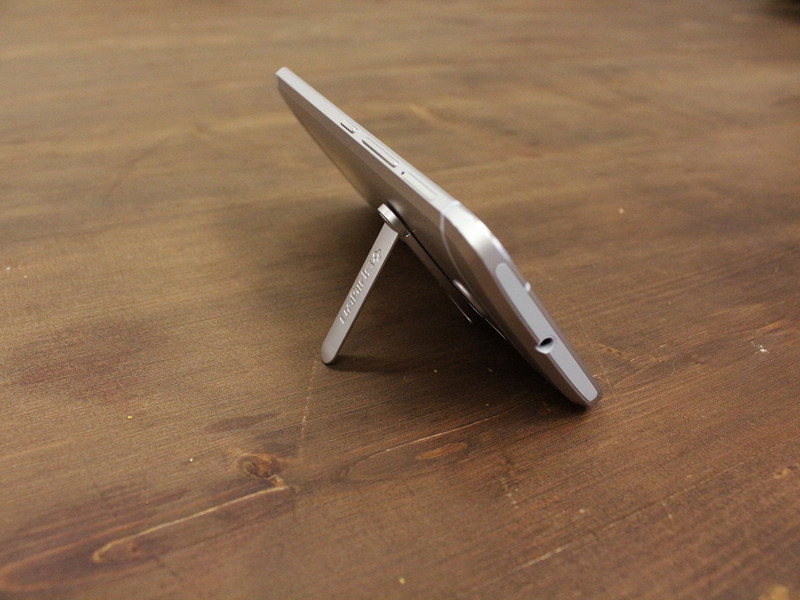 As I said at the beginning of this review, the U100 Universal Kickstand does exactly what it’s meant to. So long as you place it properly on your phone, it will prop it up and you will be able to watch videos hands-free.

It’s also rather convenient, since that “one-touch technology” claim is pretty true, however obvious it may be. The magnet is secure, but not so strong that you have to pry the leg away with a crowbar.

The U100 Universal Kickstand does exactly what it’s meant to.

I tried the U100 in both orientations on the back of my HTC 10; I placed it horizontally and vertically and both ways work just fine, though placing it vertically makes your phone easier to knock over.

When placed horizontally, it looks like your phone is being held up with a small popsicle stick and it really looks like it should be tipping all over the place, but it’s actually perfectly stable when the kickstand’s in use and might even work in the car on a portable lap desk.

The “semi-automatic spring tension” is quite handy, since once you pop the leg off, it springs into action and that’s it — you’re ready to go. Basically, everything about the kickstand works like it should and like you want it to. What more can you really ask for? 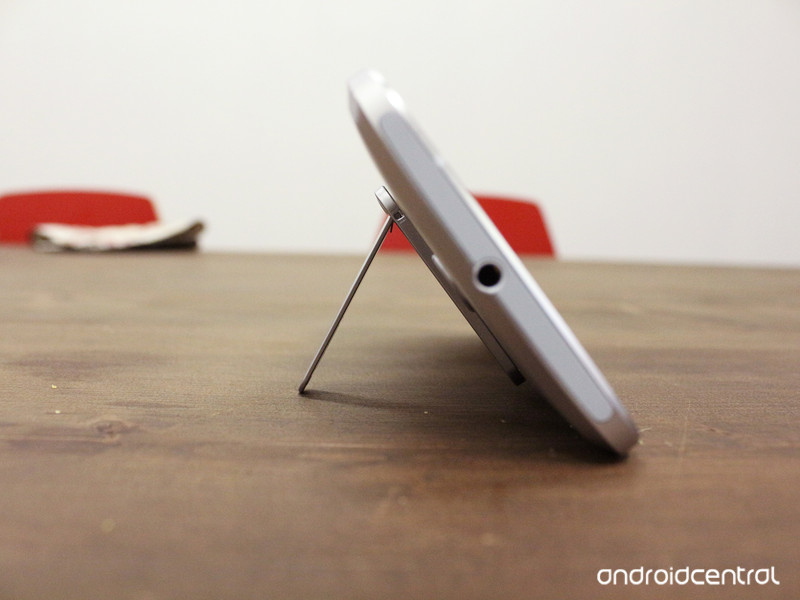 Despite some design flaws, the Spigen Universal U100 Kickstand is very handy. If you can get used to the way it feels on the back of your phone, it’s a convenient, minimalist way to watch YouTube and be able to eat dinner at the same time.

It looks great and works just like it should, so if you’re looking for an accessory in this vein, you have no reason not to pick this one up … as long as your phone has a flat back.