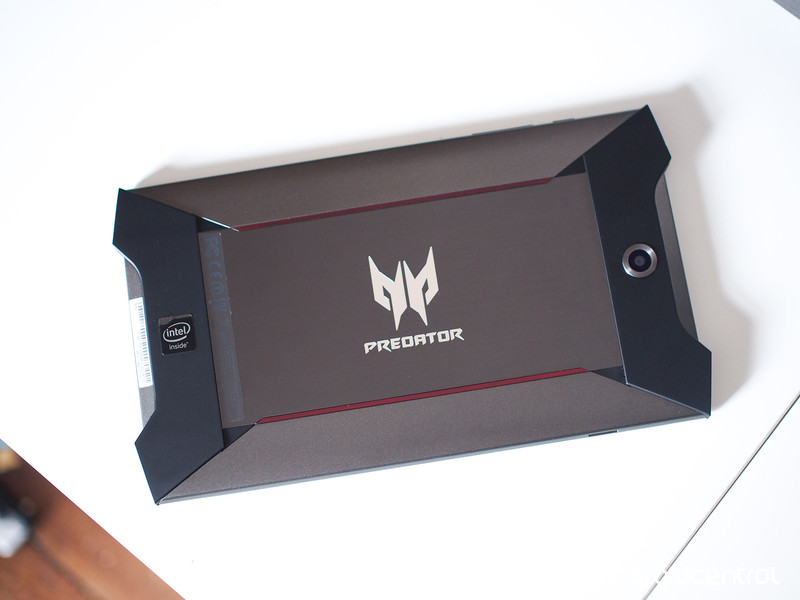 Acer’s gaming brand has an Android tablet that shouts a big game, but doesn’t quite hit the mark.

Acer has made Android tablets for years, but it is getting into a more niche space with its first Predator-branded product for the ecosystem, the Predator 8. How does it stack up? Read on.

Believe it or not, Android is now a fairly strong place to be for folks who like to game on the go. The quality of mobile gaming has improved exponentially in recent years be that new names making a splash or some retro PC and console classics that are now playable in the palm of your hand.

As such, there are a couple of dedicated players in the gaming space trying to make a splash. NVIDIA is the incumbent champion with the excellent Shield, a tablet we recommend as the best you can buy right now. And then along came Acer, with the Predator 8.

Unlike NVIDIA, which usually just makes the internals for gaming laptops, Predator is a fully fledged gaming hardware brand from Acer. Usually its aggressive logo is adorned on desktop rigs and beefy laptops. And now, it comes to an Android tablet.

So this is a gaming tablet from Acer, then. It’s not at all like the one from NVIDIA, but it has a lot to live up to in order to take on the best. So how well does it fare? That’s what we’re here to find out. 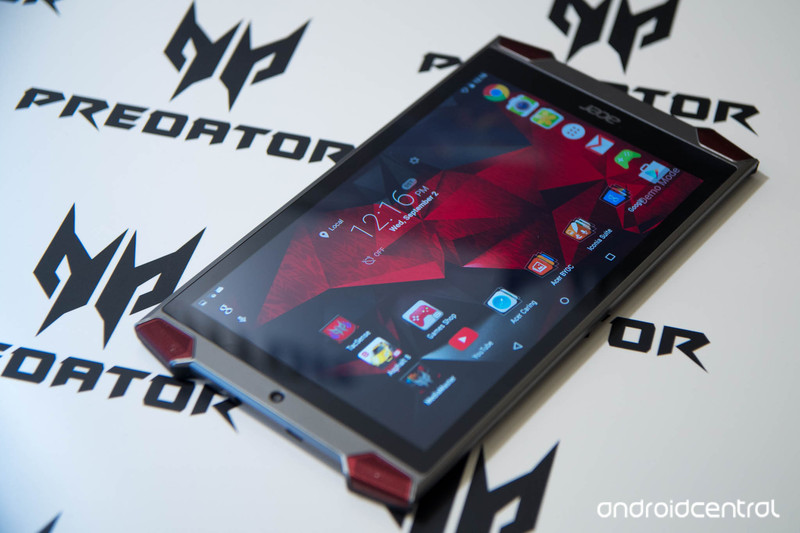 There’s little denying that the Predator 8 stands out in a crowd. I mean, tablet design can only go so far, but in a sea of black rectangles you’ll have no excuse not to see the Predator coming.

Equally, it’s a design that will firmly split opinions. There are those people who adore the garish designs traditionally found on gaming laptops, and there are those who would only use them while their head was inside a paper bag. The Predator 8 adopts this styling technique. You’ll love it or hate it. There probably won’t be a middle ground. For the record, I like it. It appeals to my inner child.

Those speakers on the corners are LOUD

The aggressive lines aren’t all show, though. From the rear the shape is bizarre (and so too from the front, really) but those angular corner pieces are where you find the four front mounted speakers. These were a good choice, regardless of your thoughts on how the thing looks.

If you like to have some serious sound while you’re gaming or watching video content, you’re in luck. The speakers are loud, without offering anything exemplary in quality. They’re tablet speakers after all. But you won’t have any issues hearing what’s coming out of them. 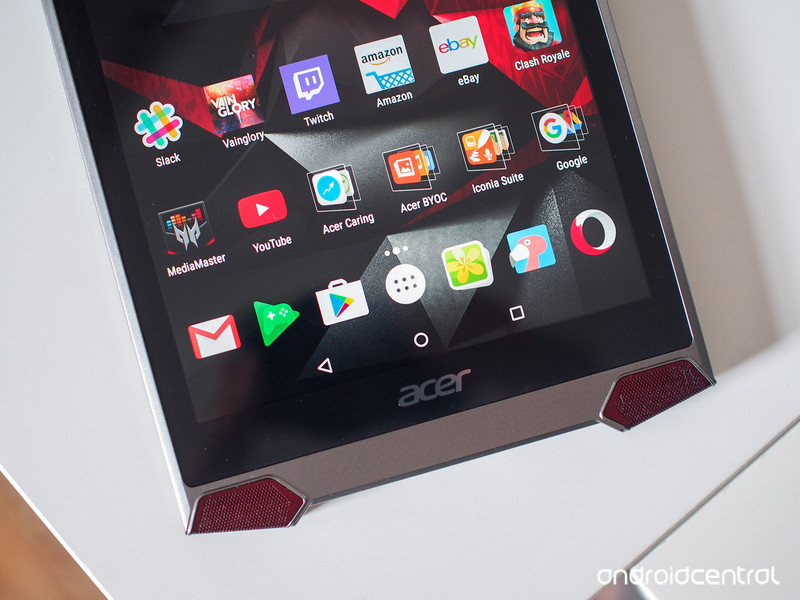 Besides being all angular and aggressive looking, there’s a fairly striking red and silver color scheme all around. The shiny Predator logo lets everyone know that this isn’t any normal tablet. Those angles also fit in just the right places to put a hand either side of the tablet in landscape mode without having pointy corners digging into your skin.

Out front is a nice, if unremarkable 1920×1200 resolution IPS display. It’s pretty bright, too; several times during the review period finding myself turning it down. Underneath you’ve got some fairly normal sounding specs: 2GB of RAM, 32GB of internal storage and a quad-core x7 Intel processor.

The x7 processor from Intel has some horsepower

Only this particular processor from Intel is a little more beefed up than we’ve been used to on past phones and tablets bearing the famous logo. The Predator 8 uses an Intel x7 processor, which by comparison is used in the Microsoft Surface 3. To run full Windows 10.

So the Predator 8 has some grunt. It also has an adequately-sized 4420mAh battery inside it, which shouldn’t be too bad for an 8-inch tablet without cellular radios. But more on that later.

What you have here is a pretty wild-looking tablet that’s a great size and has plenty enough going on underneath to eat up even the most intense games that the Google Play Store can throw at it. Which is where we head next. 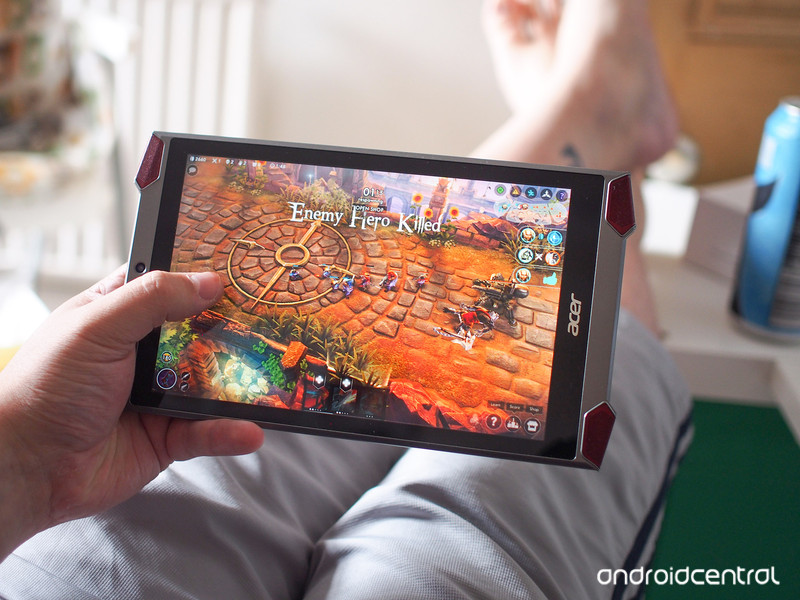 Usually we’ll get a tablet in for review and go through the motions: hardware, software, battery, camera and so on. But the Predator 8 isn’t just any old tablet. It’s touted for gaming, so that’s what I’m going to focus on.

The software is mostly as you’d find from Google. Very plain Android, with slight customizations such as the “Left Panel” for news feeds and whatnot, and some pre-installed custom apps. Really, that’s all there is to it.

So, to playing games.

The Predator 8 has a task at hand to get on the same level as the NVIDIA Shield. Besides packing some serious power inside, the Shield has access to an ecosystem of titles. There’s also a dedicated controller and a cover that props it up at such angle as you can play games nicely with said controller.

Acer doesn’t have a first party input. Controllers can be found, sure, but it’s easier to tie up your gaming tablet with a ribbon if you can show casual consumers the whole kit and caboodle. There is an official case that ill prop it up, but I haven’t yet seen one of those in person. You can at least buy them, it seems. 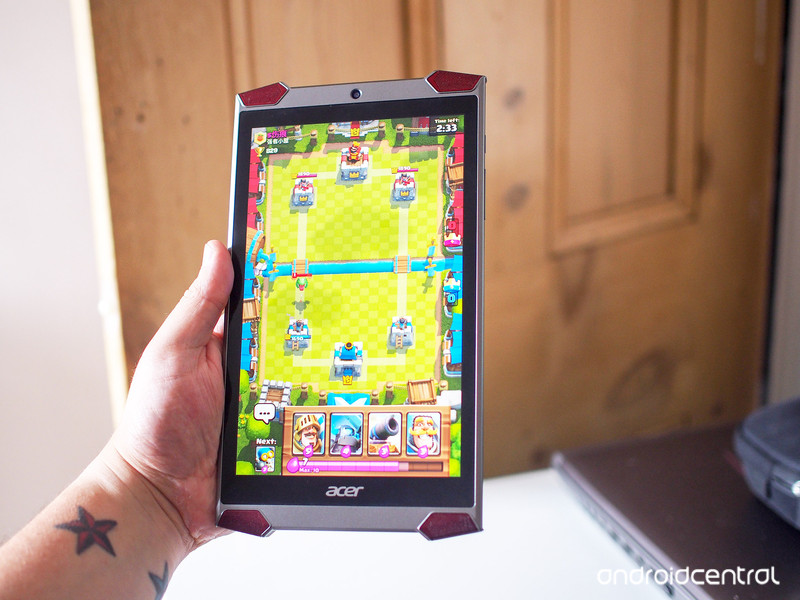 The biggest thing Acer lacks over NVIDIA though is content. There are exclusive games for the Shield as well as the ability to stream PC games to the tablet. The Predator has none of this. What you have is what you get through the Google Play Store.

That isn’t a bad thing, but there’s nothing there to shout about, to make it stand out from the competition. But thankfully the Google Play Store is well stocked in 2016.

Acer has a bunch of gaming friendly marketing relating to the hardware for the Predator 8, a couple of which are highlighted below:

Get a grip on your entertainment with Predator TacSense dual haptic feedback. Two carefully calibrated vibration-inducing motors give you a game-controller experience in a super-thin tablet.

Predator Precision Plus technology lets us pack tons of touch sensors into the screen, so you can control your games with pro-level precision. Get the competitive edge with the ultimate level of gaming accuracy at your fingertips.

I’m not a fan of technical mumbo jumbo, and to many none of this will really mean anything. In my (less technical) layman’s words, the touch experience is superb and it vibrates too often. Like vibrating constantly when booting up — even when turning on the display.

For what it’s worth, I like to turn controller vibration off on my Xbox One. So I’m not a fan of throwing all the vibrating things at my fingers.

The Predator 8 is great to play your games on

The Predator 8 is, however, mostly fantastic to play games on. As already discussed, the size is basically perfect for a tablet, the grip pads on the back are just grippy enough and the display is a good rounder.

I’ve played a mixture of games throughout the review period, ranging from Clash Royale up to Vainglory, and a few places in between. The Predator 8 hasn’t missed a beat once. You never buy a tablet expecting to be surprised by its performance, but the Predator 8 doesn’t disappoint. 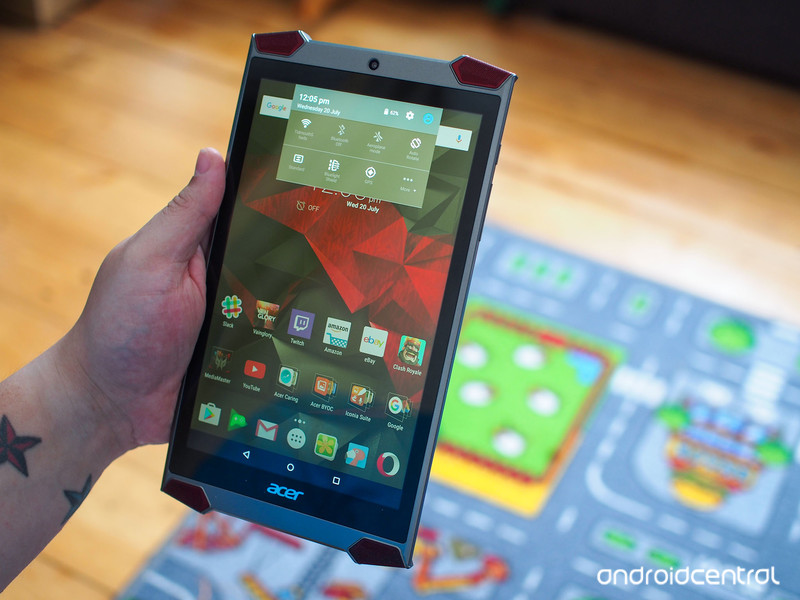 The combination of the speakers, display and overall performance leads to a solid experience. I’ve never felt like I needed more from the hardware. I also particularly like the built-in blue light filter, something I’ve written about previously. It makes a massive difference to eye strain while using the tablet in the evenings.

Where I do feel I need more is in the overall experience. I need a case to prop it up on, and I need a controller. Games like Vain Glory are touch-specific which is fine, but personally I can’t seriously get into tablet gaming without a physical input. Acer could have made it a lot easier for its customers by offering a bundle.

If you’re OK with touch-only, you’ll have a blast. 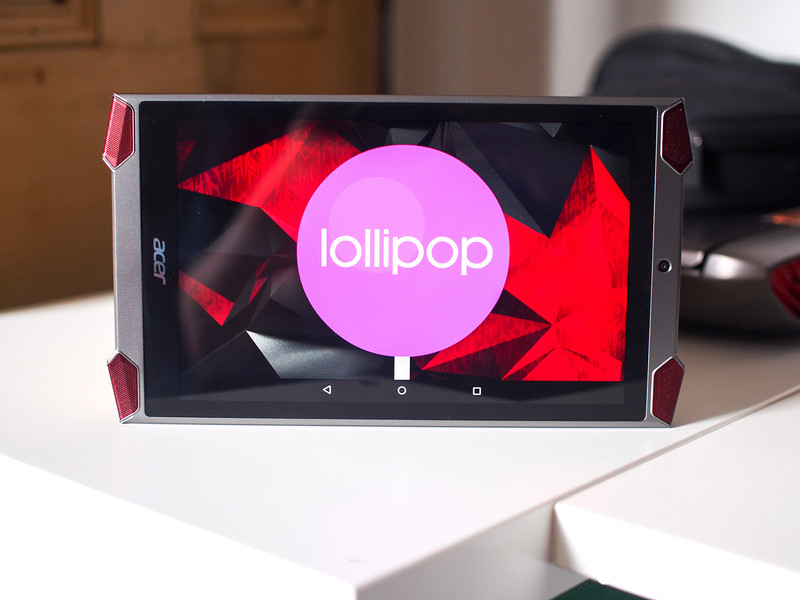 There are things about the Predator 8 that aren’t particularly good. While software hasn’t been much of a focus in this review, there is one important thing that it needs marking down on. It runs Android 5.1 Lollipop.

There’s no beating around the bush: this is a very bad thing. And what’s worse is we’re not exactly teeming with confidence that it’ll ever progress beyond this.

The other big downer is the battery life. It’s just underwhelming. Plain old bad. In the same time that an NVIDIA Shield had dropped around 20%, we’re looking at 50% on the Predator 8. Several days during the review period I saw just 2 hours of screen-on time, dropping 10% during two or three games of Clash Royale. I did check, and Clash Royale isn’t the most battery hungry game on earth. The display is the big power muncher and it’s not lasting nearly long enough for extended gaming periods or watching more than a solitary movie away from the power outlet.

The battery life in particular will sour anyone’s experience with the Predator 8. It’s yet another thing to constantly charge. It’s a good thing there isn’t a cellular radio inside, frankly.

But that’s another thing missing. Not everyone cares, but unless you’ve got data you can’t play some games. Vainglory springs to mind, limiting your travelling play time potential unless you’re happy tethering. NVIDIA at least offers a 4G variant of the Shield, and it’s your choice whether you want it. 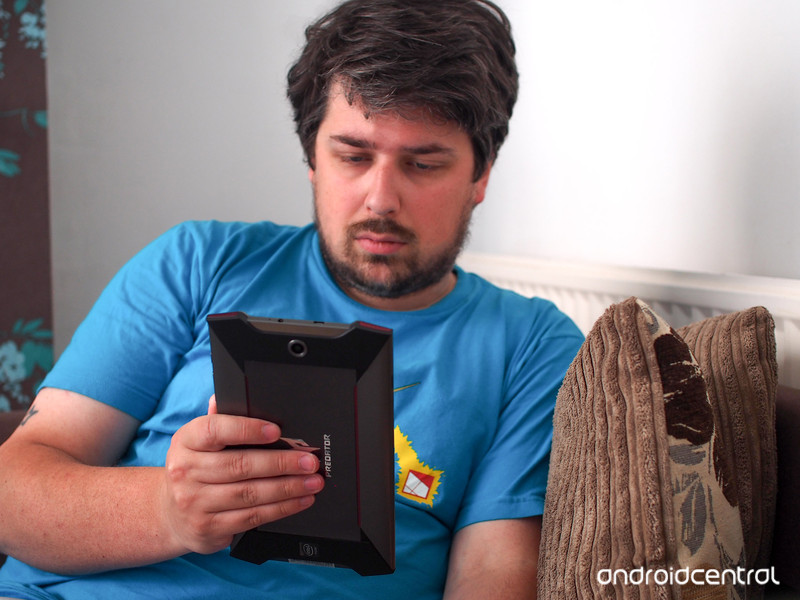 Acer took a punt on making a gaming tablet based on Android and for the most part did a good job. The love-or-hate looks will divide opinions but regardless makes the Predator 8 stand out in a crowd of black rectangles. It can’t be accused of ignoring raw horsepower, either, putting in the most powerful option it could at the time from its partner, Intel.

But for as good as the Predator 8 is at what it sets out to be, it falls short of the mark. The NVIDIA Shield is still the one to beat in this, and all Android tablet categories, and sadly the Predator 8 won’t be unseating it any time soon. It’s not a bad tablet, but it’s not as good as it needs to be.

The battery life is its biggest failing. You could overlook other annoyances like only being on Android Lollipop if you wanted, but you can’t ignore the battery life. It just isn’t good enough, and that’s a shame, because I do actually like this tablet, and a lot more than I thought I would. But I don’t like having to charge it up all the time.

Should you buy the Acer Predator 8? Probably not

The Android Central recommendation of best tablet still stands. If you can buy an NVIDIA Shield, you should. Aside from the battery life there’s nothing really wrong with the Predator 8 should you really want one, but it’s tough to recommend you buy when the competition is as good as it is.

But if you can get one at a good price and like what you see then why not. Just be aware of where you might be disappointed.