Over the years, smartphones have either been high end and expensive, or dirt cheap and shoddy. But, two years ago, the industry shifted and midrange phones that had great specs for lower prices started to fill the gap. ZTE has long been a proponent of what it calls the “affordable premium” device, and has thrown out middling handset after middling handset that met only the “affordable” part of that promise.

Last year, the Chinese company debuted its Axon line, which was stuffed full of features to fulfill the premium promise. But the Axon Pro fell short, with an oddly hollow metal body, glitchy software and short battery life. It was also more expensive than last year’s OnePlus. This year’s Axon 7, however, is shaping up to be a far better contender, with the same $399 price as the OnePlus 3 and offering a higher-res screen, sharper camera and more premium design.

The Axon 7’s design is the result of a team up between ZTE and BMW DesignWorks, and it’s a definite improvement over its predecessor. My gold review unit has a smooth matte finish on its metal body that helps it reject fingerprints and is accented by eye-catching glossy chrome edges that are also around the camera and recessed fingerprint sensor. It looks and feels gorgeous in an elegant way that upstages the OnePlus 3.

Just like its predecessor, the Axon 7 has a row of dot cutouts on the top and bottom of its front face, but unlike the Pro, these grilles actually hide speakers. (The old Axon’s grilles misled a lot of people into thinking it had dual speakers, but it only had one.) Below the display are capacitive keys for Back, Home and All Apps. There’s also a dual SIM card slot on the left edge — a welcome feature for frequent travelers. 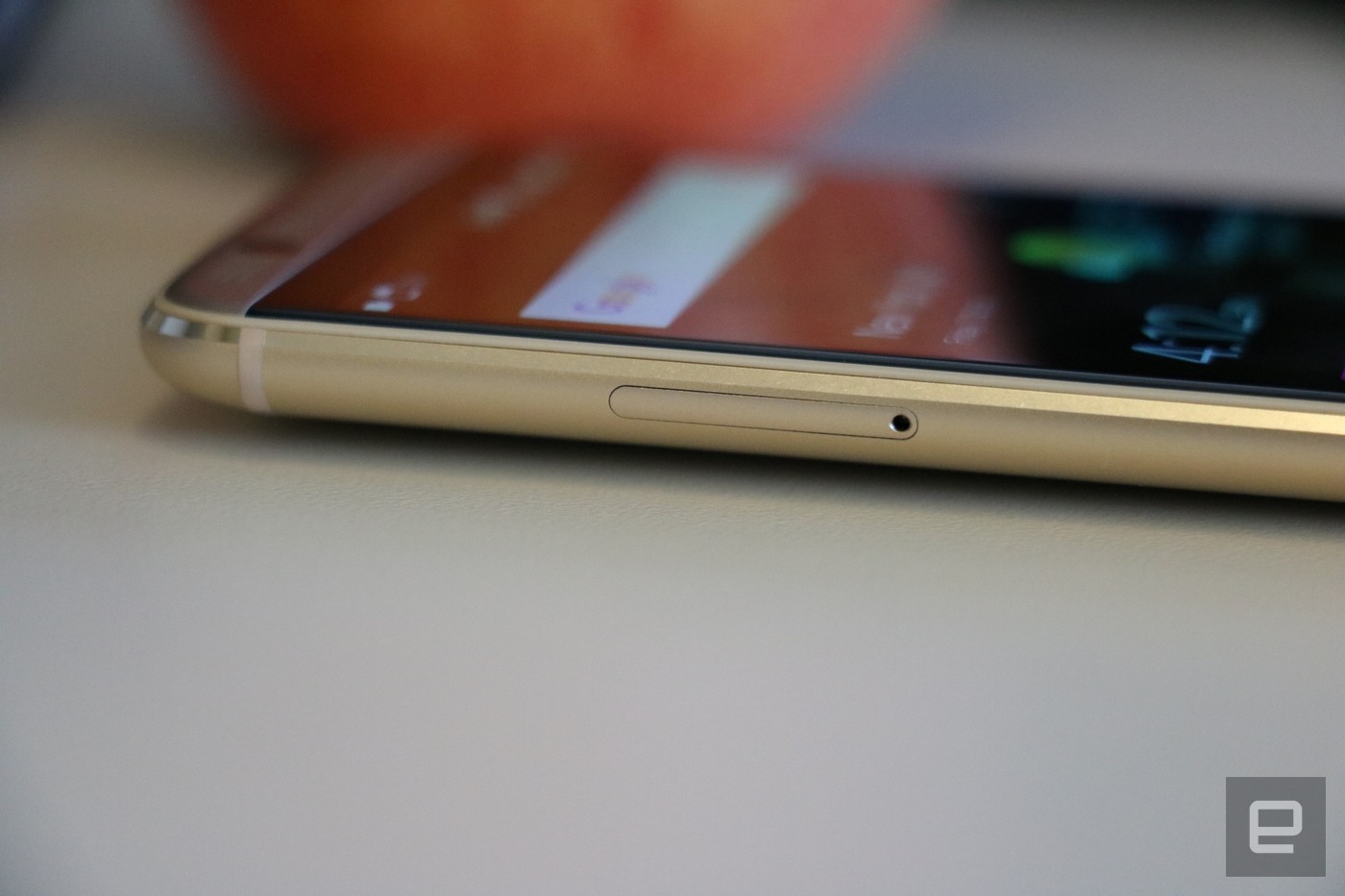 ZTE says the Axon 7 will eventually be ready for Google’s “Daydream” mobile VR platform, and its display certainly seems prepared for the task. The 5.5-inch Quad HD AMOLED screen was a great canvas for my Netflix binging and Instagram sprees, but it was unfortunately dim in sunlight. Although it doesn’t fix the lack of brightness, the Axon offers built-in software that lets you customize the display’s color output. The tool lets you pick from three saturation profiles — “Natural,” “Colorful” and “Gorgeous” — as well as “Warm,” “Normal” and “Cool” color temperatures. I set the screen to “Gorgeous” and “Normal,” which delivered higher contrast levels and deeper hues.

Complementing the screen is a HiFi audio setup. Not many smartphone makers pay attention to quality sound, but ZTE is so proud of its system that it devoted six pages out of a 33-page reviewer’s guide to it. The only other component that got as much love was the camera. For the most part, the coverage was justified.

The Axon’s dual front-facing stereo speakers pumped out distinct, clear sound that drowned out my laptop’s speakers while both devices were set to their maximum volumes. The phone’s speakers were so clear, in fact, that I could easily hear the crinkling of wrapping paper in the background of a scene over dialogue and overlapping music. The Axon was also loud enough to hear from another room. Dolby Atmos enhancements created a surround sound that is more immersive than I’ve experienced on other devices. One of the few other phones to place such a heavy emphasis on audio is the HTC 10, which lets you tailor music output to your hearing.

Continuing its quest to outdo the competition, ZTE also stuffed a 20-megapixel rear camera into the Axon 7. That sensor is sharper than what you’ll find on the iPhone 6s, Nexus 6P and Galaxy S7. The Axon 7’s camera has phase detection autofocus (PDAF), with optical and digital image stabilization that, when combined with the high megapixel count, should theoretically result in crisp pictures. However, real-world image quality was hit or miss. My shot of mosaic art at the 8th Street NYU subway station was clear enough to show individual tiles on the wall, but landscapes with buildings in them sometimes looked blurry.

The camera struggled in low light, too. Upper East Side buildings looked like grainy, dark brown, blobs in a nightscape, and the whole scene was covered with artifacts. Other phones, such as the similarly priced Alcatel Idol 4S, fared better in the same situation.

Up front, the Axon 7’s 8-megapixel front camera takes decent portraits that have accurate colors and are sharp enough to see details such as my individual eyelashes. Thankfully, the “Beautify” mode erases imperfections on your face without going overboard and making you look like a painted-over caricature. Unlike most of this year’s smartphones, though, the Axon doesn’t offer a front flash feature for low-light selfies. 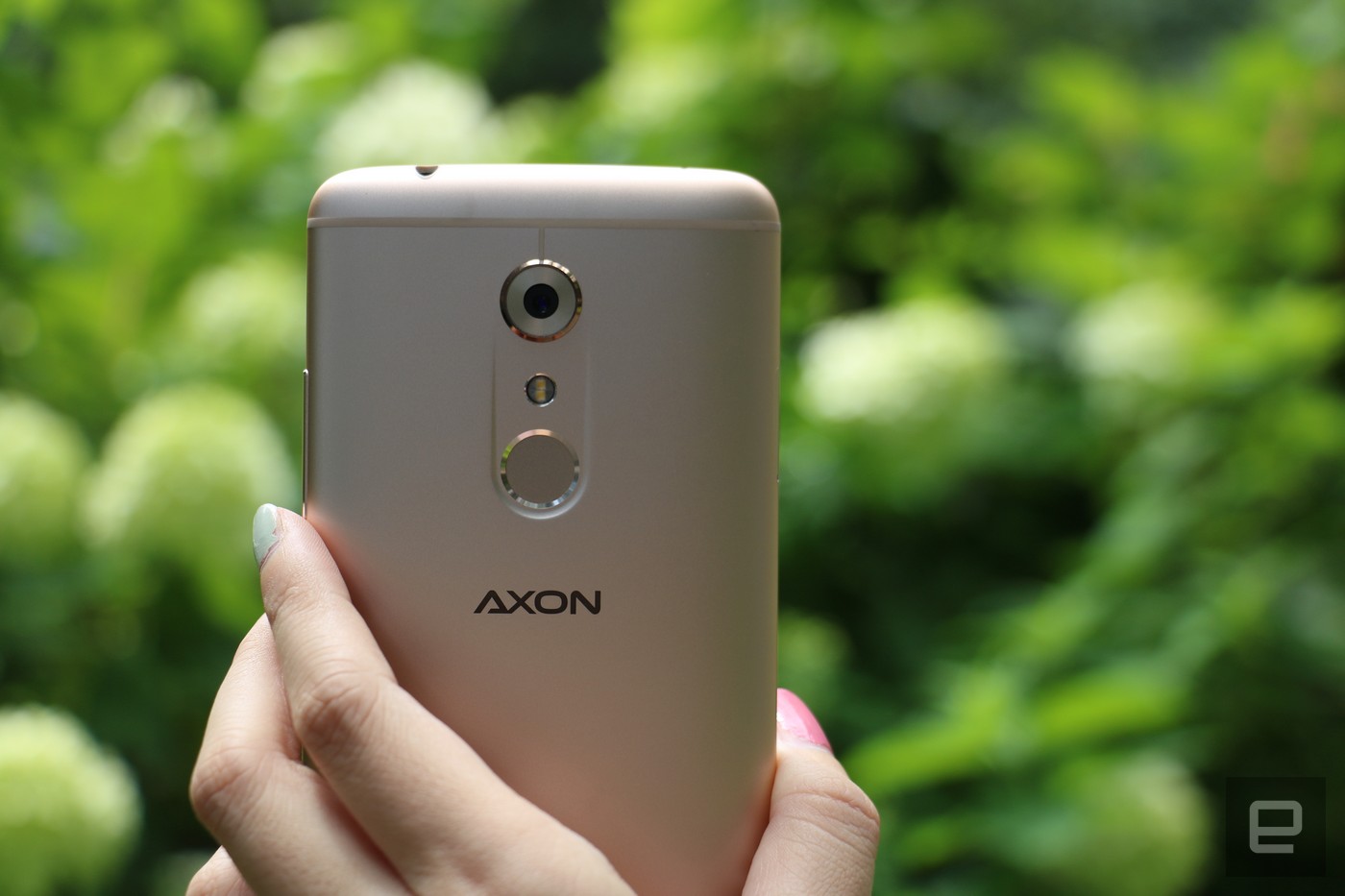 Armed with the same Snapdragon 820 chip as this year’s Android flagships, the Axon 7 was impressively responsive. I relished taking down an enemy Pokémon Go gym as well as catching an oddly evasive Pidgey without any annoying lag — in both cases with a host of apps running in the background.

Even when I used AZ Screen Recorder to capture my exploits while switching between the game and a Netflix video, the Axon kept pace without missing a beat. The only app in which I encountered delay was Pokémon Go, but that appeared to be a server issue rather than the device’s performance.

You’ll be able to enjoy day-long Pokémon Go expeditions without fear of running out of juice, too. The Axon 7’s 3,250mAh battery typically lasted about a day and a half of light use, and I was surprised by the hours of “White Collar” I was able to stream (an impressive 6.5) before the low-battery alert popped up. When powered up with the included charger, the Axon 7 can get back up to 50 percent life in just 30 minutes, the company said. 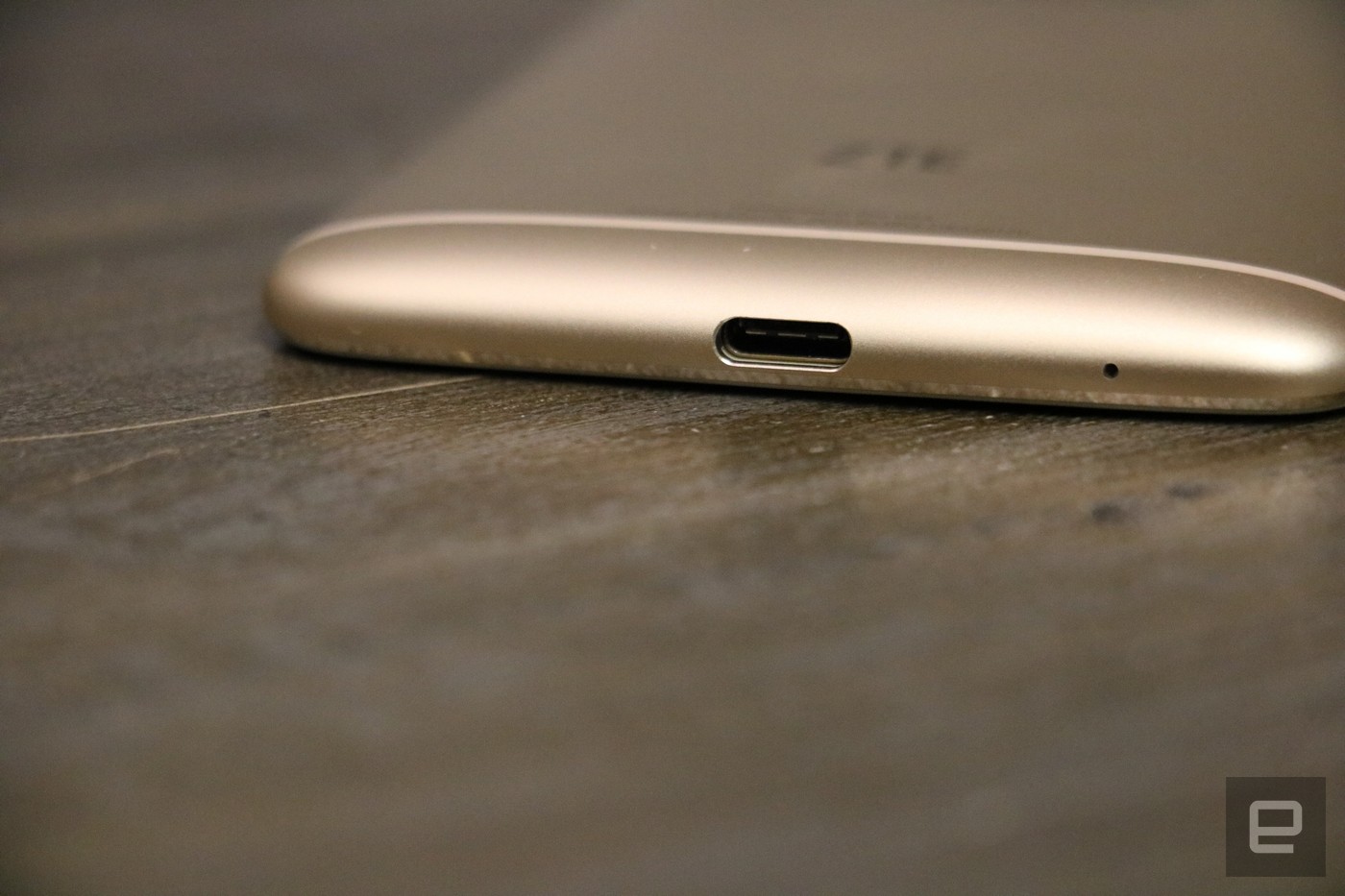 Although it runs a pretty clean version of Android 6.0.1, the Axon 7 comes with some ZTE-made software changes that I was surprised to find helpful. Most interesting of these is the Power Manager that not only lets you monitor your battery consumption but also gives you the option of setting “power-saving policies” for individual apps such as disallowing autostart, scheduled background wake-up and allowing deep sleep.

A cool Mi-Pop tool adds a floating shortcut to the screen that you can place within reach of your thumb so you can access essential navigation buttons such as Back, Home and All Apps without stretching across the phone. This is a handy tool because trying to reach across the Axon’s face can cause you to drop the phone.

There’s also an intriguing “Voiceprint” function that’s supposed to let you unlock your phone with your voice, but after I excitedly went through the setup process and said my keyphrase three times for the Axon to store it, the method never worked. No matter how many times I said, “Hello there” to the phone, whether its screen was on or off and regardless of the angle at which I held it (ZTE recommends 45 degrees away from your face), I couldn’t get into my phone. 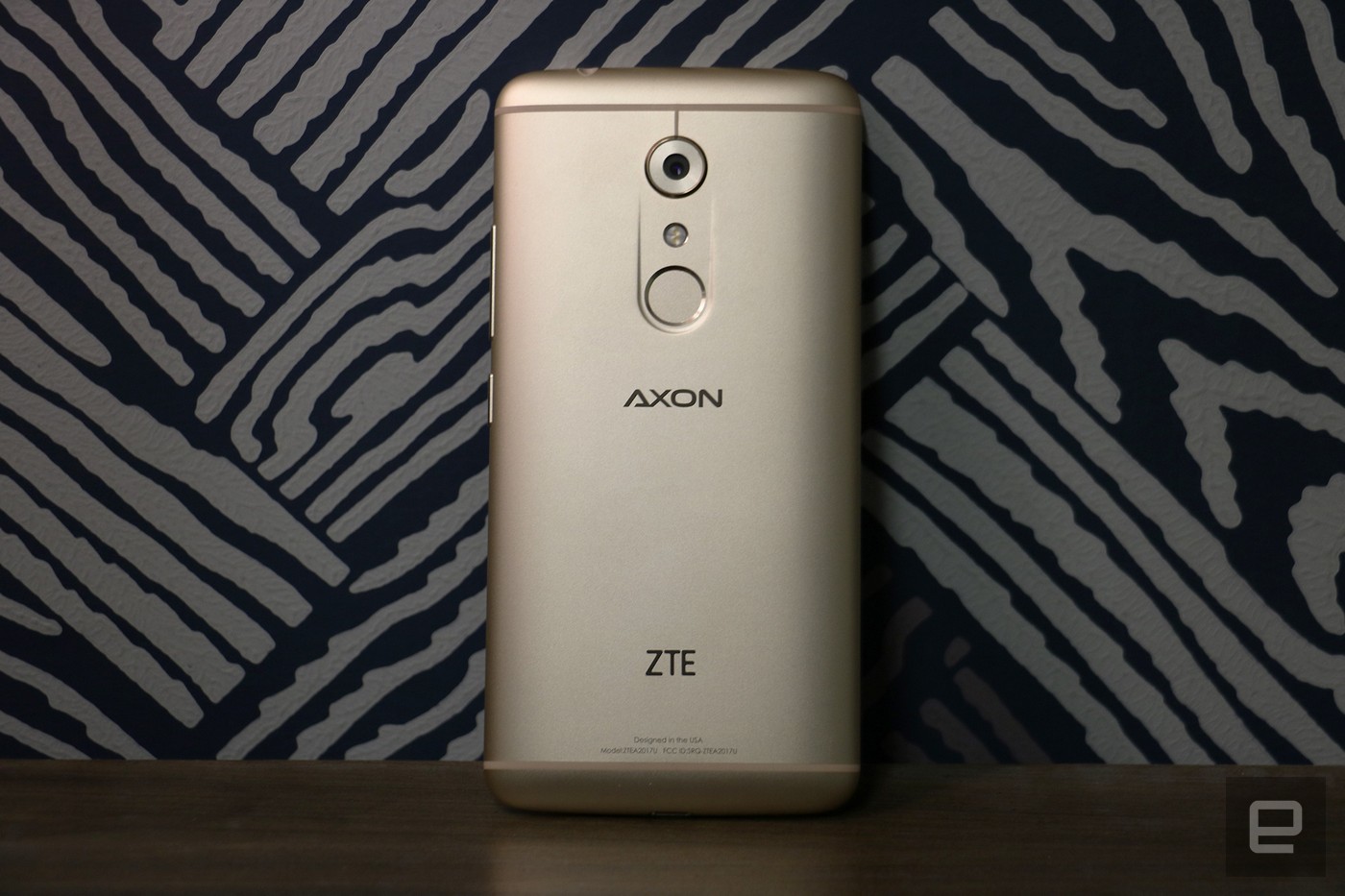 A small thing that infuriated me: Taking a screenshot doesn’t automatically save it to your phone. You’ll have to tap a checkmark below a preview of your snapshot to keep the file. What a waste of time.

Though software glitches like this exist, they’re thankfully rare, and overall the Axon 7 feels like a dependable, well-made handset. If you want a cleaner OS and can live with a less-sharp screen, the OnePlus 3 is a better bet at the same price. But those who prefer a great multimedia experience and a distinct aesthetic will find a more suitable companion in the Axon 7.