The Good The 360fly 4K is a water-resistant and dust- and shockproof 360-degree camera. It has a standard tripod mount, 64GB of internal storage, a single button for power and recording. The mobile app makes it very simple to capture, edit and share your 360-degree movies to YouTube and Facebook.

The Bad Video quality is best suited for small screens where artifacts and purple fringing are less noticeable. It’s a little pokey to power up. Audio is muffled. Built-in memory and battery, and no Micro-USB on the camera mean you always need its cradle for charging or transfers.

The Bottom Line The 360fly 4K is just all-around a better camera than the original, and its excellent mobile app is a definite plus compared to competing cameras. You’ll just have to be forgiving of its image quality.

The best thing about the 360fly 4K is its mobile app.

That sounds like a dig, but it’s only because the app is really good compared to what other consumer 360-degree camera makers are offering at the moment. It makes the 360fly 4K that much more usable, as does its design, which makes it better suited for “action cam” use than as a point-and-shoot 360 camera.

The company’s original HD-resolution 360fly camera, which is still available for $300, uses a proprietary mount, requires a little plug for its mic opening to make it water resistant, has a hard to find power/record button, a tiny status light that is difficult to see in bright light and a smooth, somewhat slippery exterior. These are all things that make for a not-so-great user experience. Plus, as has been the case with all the first-gen consumer 360 cameras, the video quality is just OK.

The $500 360fly 4K (£600, AU$850) is worth paying extra for if you have more than a casual interest in creating immersive photos and videos for sharing online. It ditches the original’s mount for a standard 1/4-20 tripod mount, it’s now water resistant down to about 10 meters (34 feet) without the mic plug and the exterior is rubberized for a better grip with wet or cold hands. Also, the activity light and power/record button are combined, which makes it easier to see with the camera off or on. 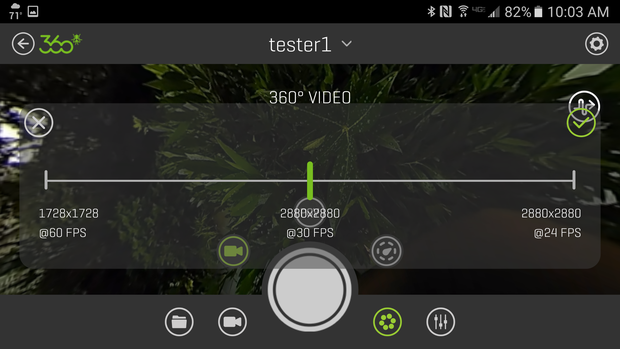 The 360fly app gives you a preview and control of the camera.

Back to the app, though. Turning the camera on also turns on the camera’s Wi-Fi and Bluetooth (the latter is to help reconnect to the Wi-Fi quicker). Join the camera’s network with your smartphone, open the 360fly app and you’ll have a live preview from the camera as well as control over it and its settings.

Along with 360-degree video, you can set the camera to shoot time-lapse video, 16:9 widescreen first-person POV movies and capture 360 photos. The top resolution is 2,880×2,880 pixels; you can choose between 24 frames per second for a live onscreen view while recording, or get slightly smoother results at 30fps without the live view. Since there is just one lens, the 360 video is not spherical, but instead has a 360×240-degree field of view. You lose the 120 degrees below the lens, but you don’t have to worry about stitching.

If you really want spherical video, you can always buy a second camera and shoot them back to back and then stitch the two videos together with software. (Kodak wisely offers a dual pack for its SP360 4K camera for this purpose at a reduced price and includes a mount to hold the cameras, a remote to simultaneously trigger recordings and very basic stitch software.) 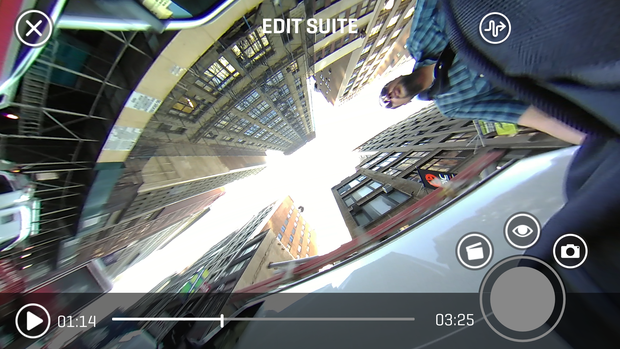 360fly made editing 360 video on your phone very easy.

Once you shoot a clip, you’ll probably want to edit it before sharing, even if it’s just to trim the beginning and end. The app makes this blissfully simple to do, letting you quickly select just the sections you want to include, then add music and/or an image filter, or you can adjust the playback speed for part of your clip.