When the mercury starts climbing, nothing screams “summertime” quite like homemade ice cream. After researching for 85 hours, testing 14 makers, talking with pro ice cream makers and a food scientist, and churning gallons of the frozen stuff over the past two years, we think the Whynter ICM-15LS is your best bet for making consistently great ice cream at home. At its current price of around $250, it’s not cheap. But because it’s so easy to use and essentially guarantees success, it’ll likely get a lot more play in your kitchen than cheaper, more finicky machines. 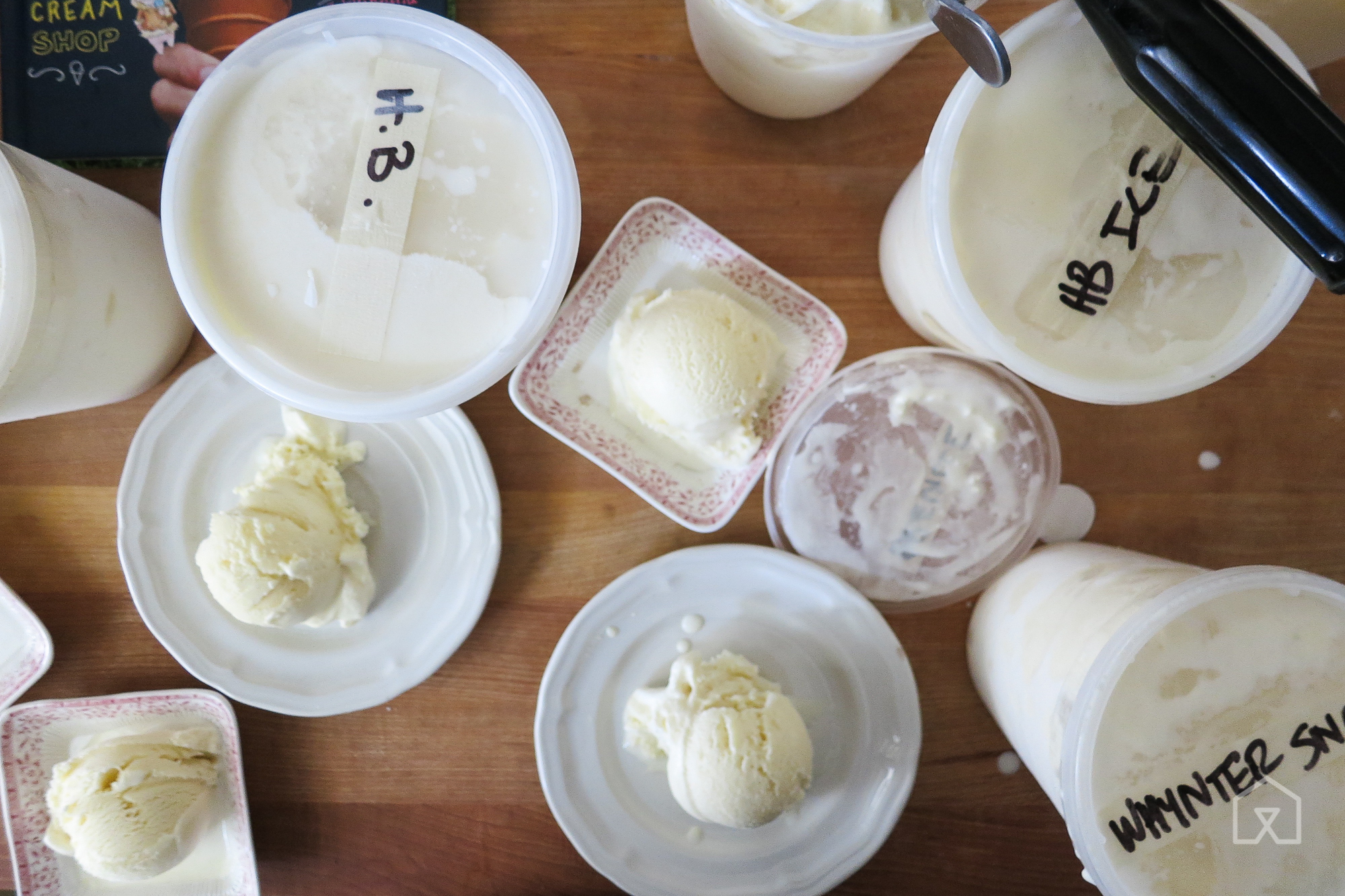 For a previous version of this guide, we tested the machines using a relatively low-fat recipe from Ample Hills Creamery in Brooklyn, and I tasted them for texture and flavor with friend Sara Bonisteel, staff editor for the food section of The New York Times. For this update, we wanted to see how the machines handled different recipes. We ran a higher-fat vanilla ice cream base through each machine; it contains more cream and egg yolks than the Ample Hills recipe, which has more milk than cream. Higher-fat ice cream bases are more forgiving because there’s a lower percentage of water to crystallize and ruin the creamy texture. If a machine made icy ice cream from this luxurious base, we figured it wouldn’t be worth buying.

We also made a simple lemon sorbet without added glucose or corn syrup to smooth out the texture. We thought an unforgiving sorbet recipe that didn’t have any aid from fruit fiber or special sugars would show us the differences between these machines. But we were wrong. All the ice cream makers made the same sorbet. After the initial two tests, we dismissed the lowest-performing machine and made chocolate ice cream in the remaining four makers. (If you’re curious, we used David Lebovitz recipes.)

Instead of the informal tasting we held for the previous guide, we held a blind taste test with six tasters. From our two years of testing, we’ve learned that with ice cream makers, you truly do get what you pay for. The prices of the machines we tested directly reflected the resulting quality of ice cream. 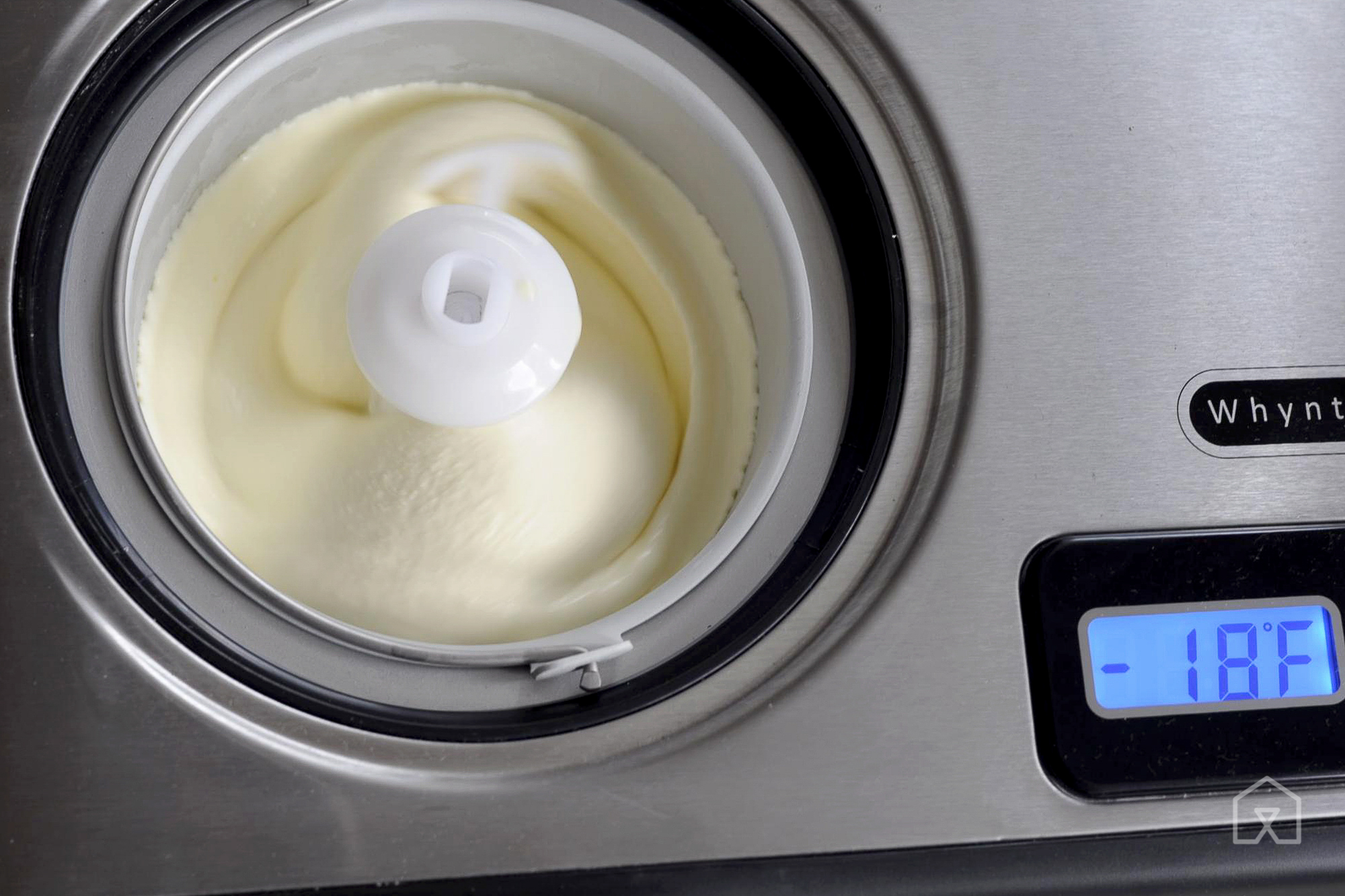 We like the Whynter ICM-15LS because it made smoother ice cream in a shorter amount of time than most of the other models. Although it didn’t create the absolute smoothest texture, it does hit the sweet spot of great results at a reasonable price. It’s also one of the quieter machines we tested, and its simple, compact design makes it easy to store. It’s also one of the simplest models to use, scoop from, and clean. And because the Whynter is a self-refrigerating compressor machine, you won’t have to deal with freezing an insert bowl or futzing with messy ice and salt. 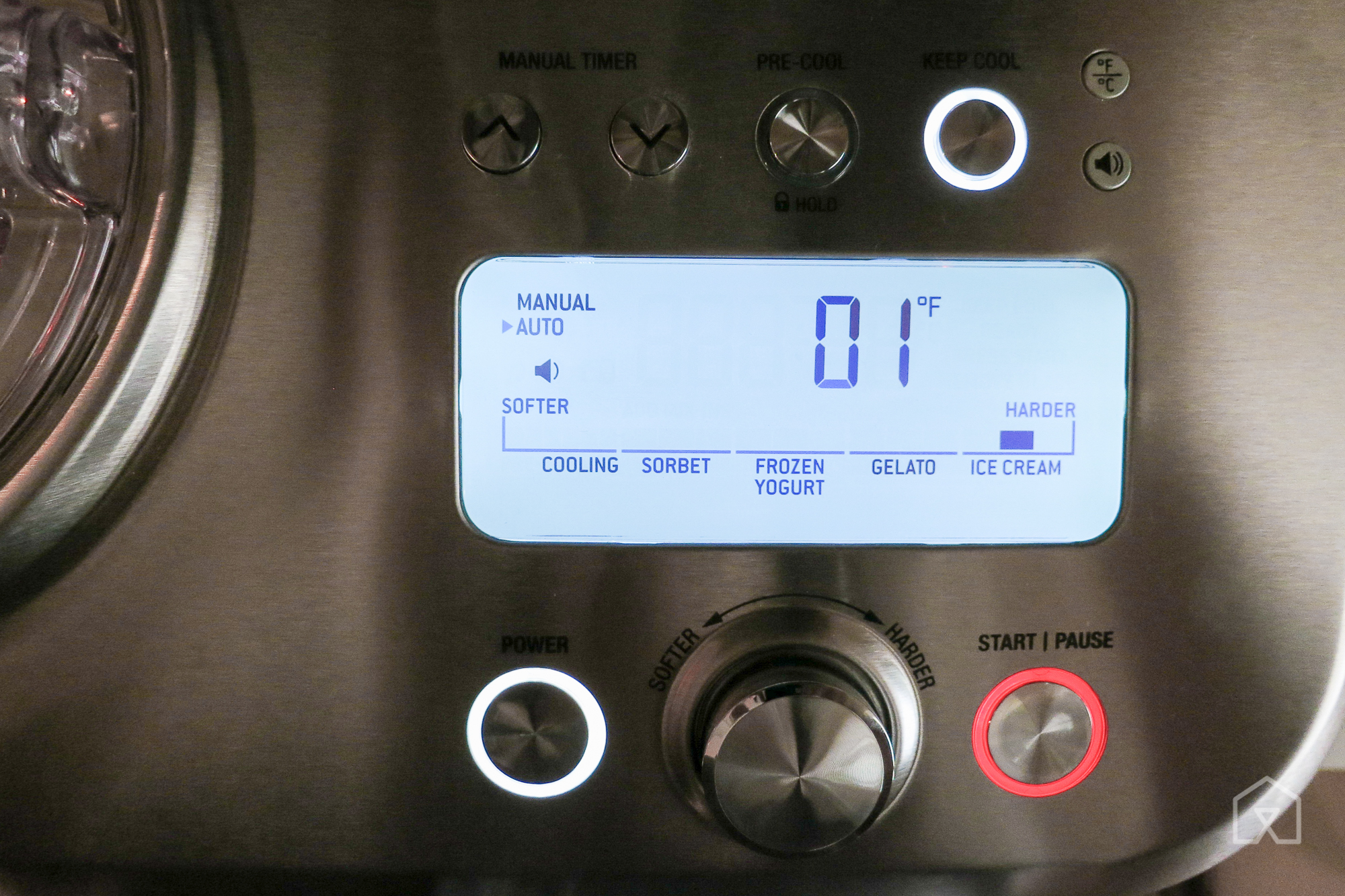 If the Whynter ICM-15LS sells out, or you just want more bells and whistles, the Breville Smart Scoop is a great alternative. Although it made slightly creamier ice cream than our top pick, the difference was so subtle that we don’t think it’s worth the extra $150 for most people. It has an auto function with 12 hardness settings and a “keep cool” function so you can set your ice cream and walk away. And its brightly lit LCD display and control panel with big buttons make it easy to use—even for kids.

If you take your ice cream craft seriously 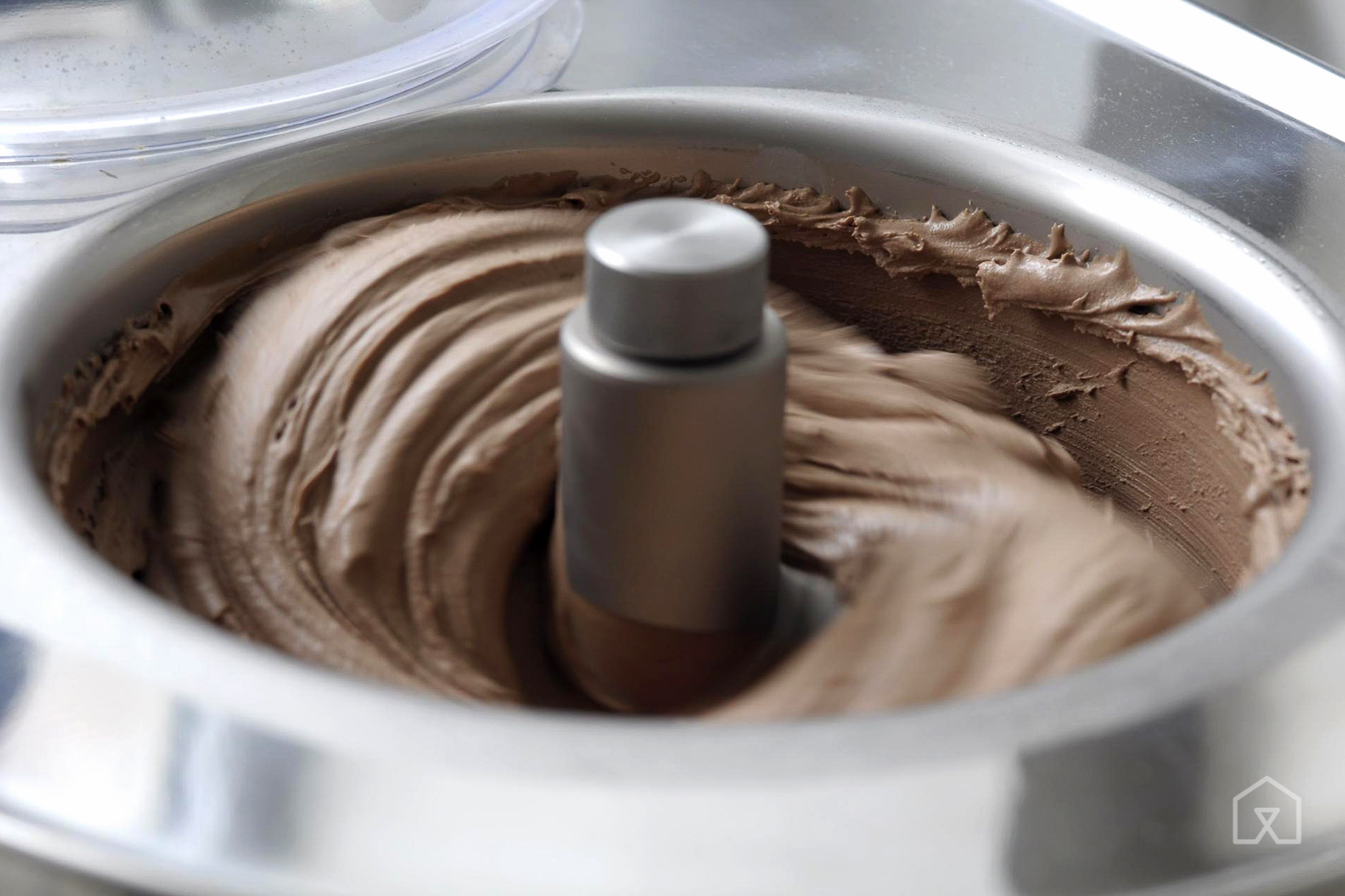 Checking the consistency of the ice cream in the Lello 4080 Musso Lussino. Photo: Lesley Stockton

The Lello 4080 Musso Lussino is the crème de la crème of home ice cream makers. The large, sleek machine churned out smooth and creamy batches of ice cream in less than 30 minutes, the fastest of any model we tested. And our tasters unanimously voted its ice cream the smoothest and best-flavored. But its jaw-dropping price makes the Musso Lussino too expensive for casual dessert-making. If you plan on making more than one quart of ice cream a week, this might be the machine for you.

The lowest speed of the KitchenAid stand mixer is faster than the churn speed on any other ice cream maker we tested. Photo: Lesley Stockton

If you own a KitchenAid stand mixer, we really like the KitchenAid Ice Cream Maker Stand Mixer Attachment as well. This is a bowl that requires pre-freezing, which necessitates more planning ahead than our main pick. It made the absolute fluffiest ice cream of the machines we tested, because the lowest setting on the KitchenAid stand mixer is still faster than the speed at which ice cream makers spin. We didn’t mind the texture at all; in fact, it was quite pleasant. 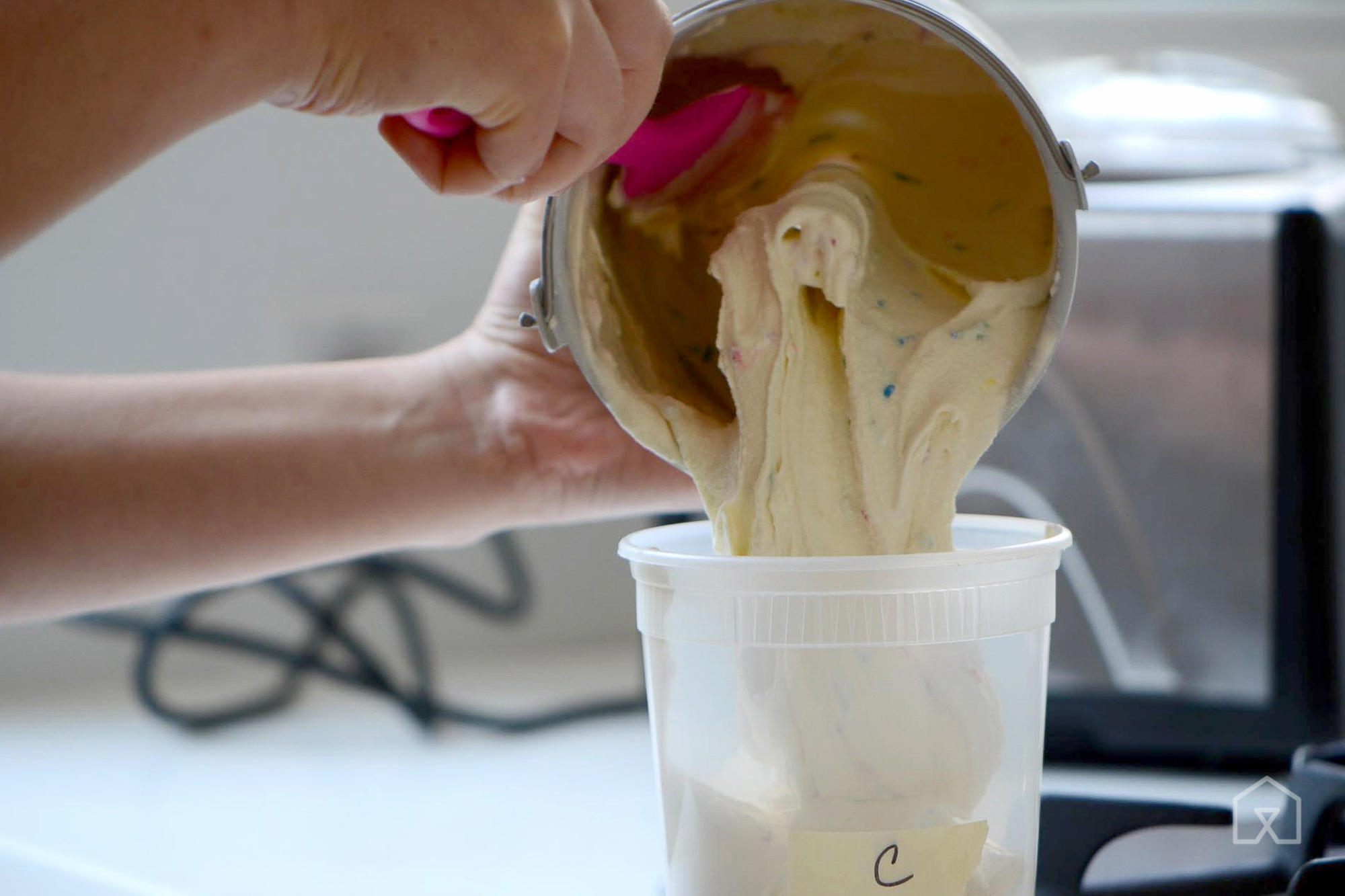 To minimize the size of ice crystals, temperature matters. Everything needs to be as cold as possible. Before you spin your base, thoroughly chill it down in an ice bath. The colder the base, the sooner it starts to freeze. Sometimes I’ll even put my base in the freezer until ice crystals just begin to form on the edges, then I’ll give it a vigorous stir before pouring it into the machine.

Once the ice cream is spun, it’s soft like soft serve. It’s completely edible but definitely not scoopable. This is the point where you “ripen” the ice cream, which means transferring it to a container to freeze for at least a few hours. Additional freezing is an important step because it reduces the formation of ice crystals; the colder your freezer, the quicker your ice cream sets, and the smaller those ice cream crystals will be. And that’s it! It really is one of the simplest things to make. Once you get your technique down, you can play around with flavors, fat content, and maybe even some stabilizers like xanthan gum to tweak texture.

If you’re interested in adding mix-ins, you’ll do this before ripening the ice cream. Ice cream base expands as the dasher whips air into the mixture. In our own testing, we found that once the quart of base increased in size, there was little room for much else, and we had to add mix-ins slowly and periodically. Also, if you are adding mix-ins, chill them in the freezer so they don’t melt your freshly spun ice cream.