After close to 60 hours of fan research, nearly a week testing products in an overheated house, and nine hours measuring air-blowing output with equipment from the HVAC industry, we found that the Seville Classics UltraSlimLine 40″ Tower Fan was the best fan for most people. The Seville is a well-built tower fan with a number of convenient features. It’s also the most powerful fan we tested. 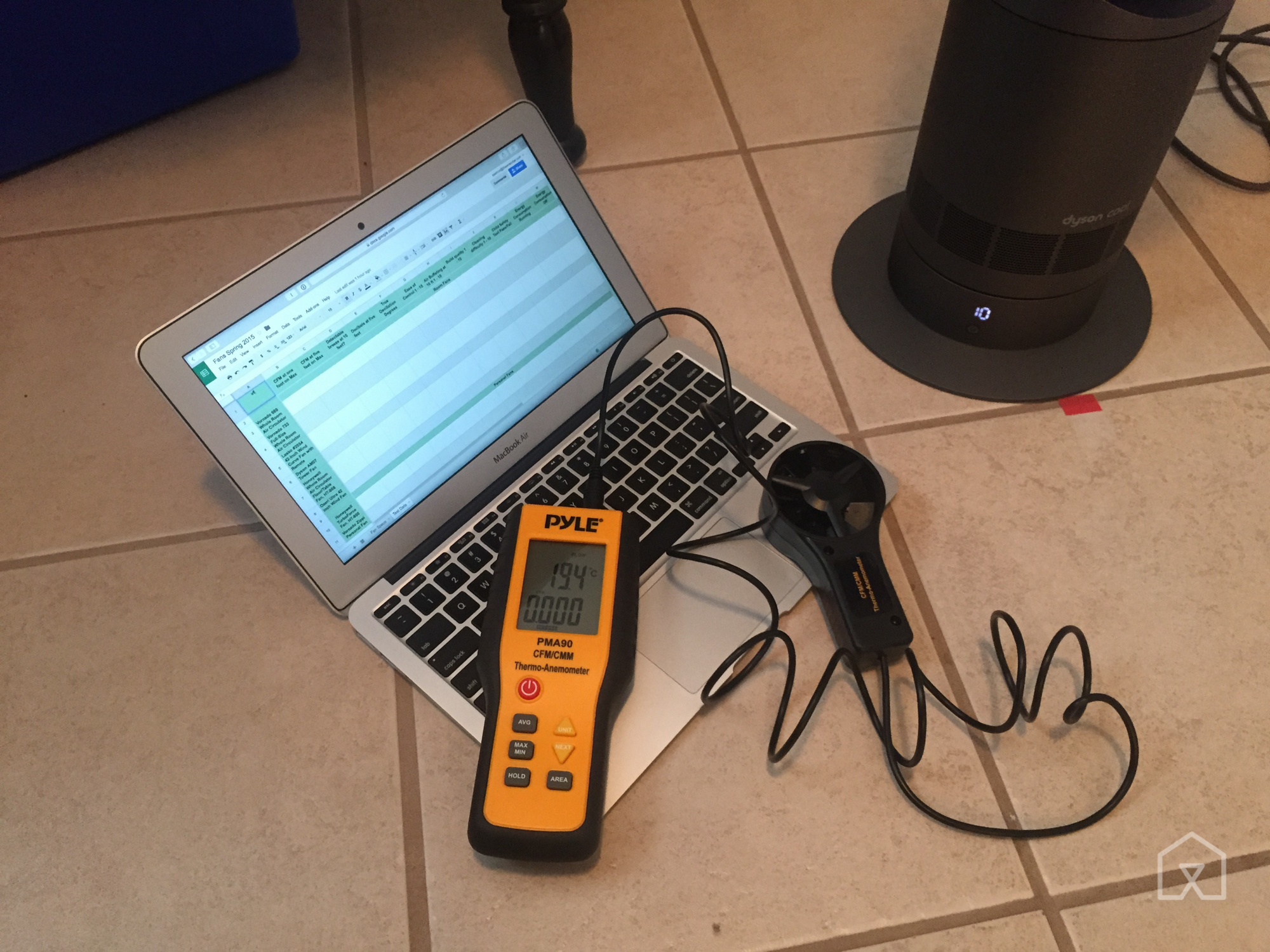 Using a handheld digital anemometer and decibel meter we charted the CFM and noise generated by each fan in our test group. Photo: Seamus Bellamy

We used a handheld digital anemometer to measure each fan’s cubic feet per minute (CFM) of airflow, which is a standard unit of measurement used by HVAC specialists, among others, to determine the volume of air moving through a space like a duct system. I combined the anemometer data with qualitative observations of whether I could still feel any wind.

We decided very early on in our process that we didn’t want to fall down a science hole on this guide, but rather, figure out which fans were qualitatively the best for most people. So we intentionally ignored factors such as the different sizes of the fans and velocity estimates. That said, we needed a metric to back up what I felt from each piece of hardware we tested. Even in an uncontrolled room where the fans vary in size, a higher or lower CFM reading could help to define the sensation I experienced while sitting in front of the machine.

I also looked at how much energy each fan used over the space of a month, as well as whether each device drew any power while switched off. For a real-world test, I spent five days and six nights living with all of the fans in my test group to see how they handled themselves in the heat. I took note of how easy the fan was to control, how wide an arc it could rotate in while oscillating, how loud each one was, what the quality of the noise was like, and whether the breeze from each fan was cooling and pleasant.

Finally, I checked the safety of each fan. Did its operating temperature get dangerously hot after running all day? Were the gaps in the grate big enough for fingers to fit through and touch the blades? 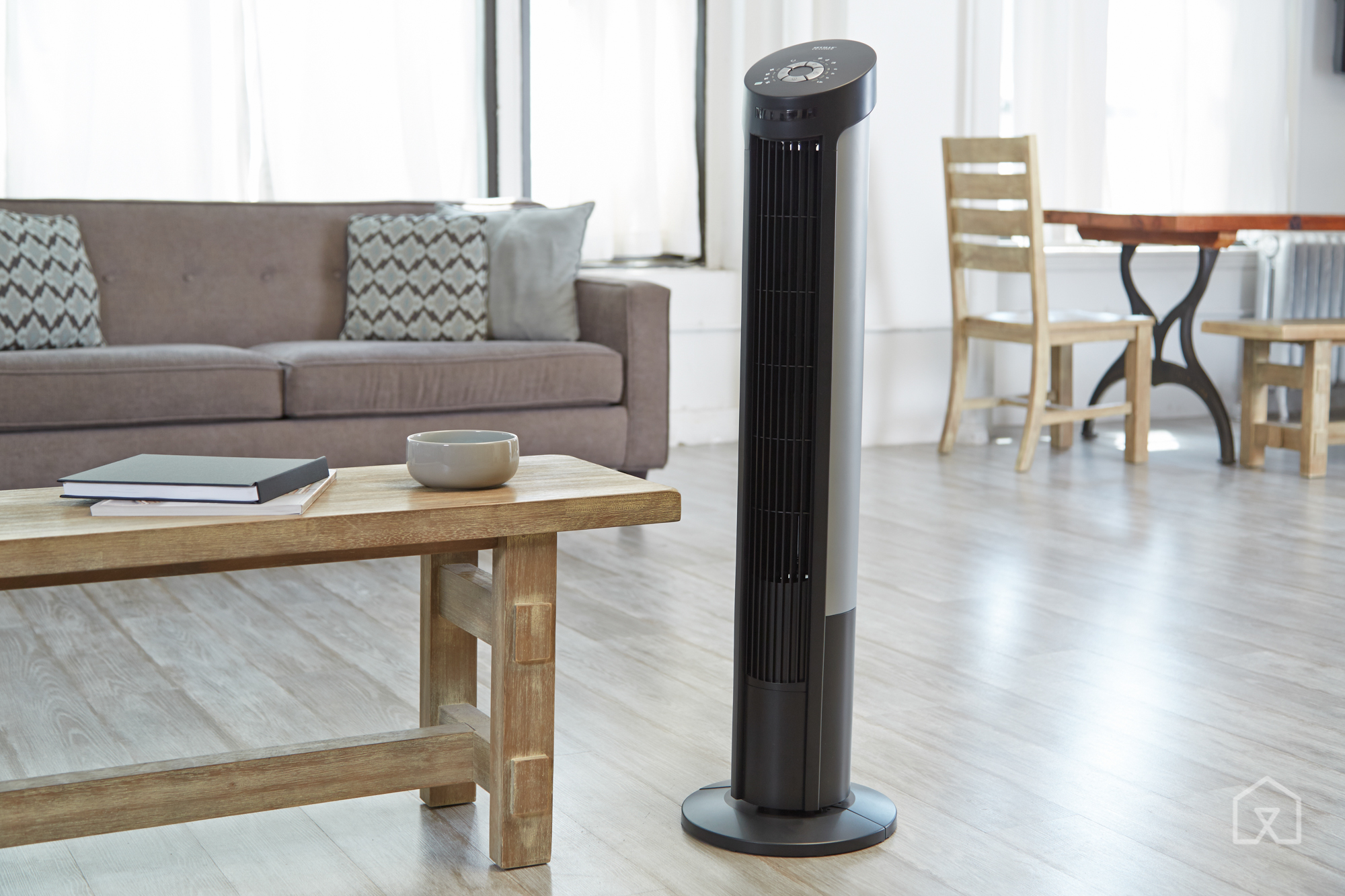 The Seville proved to be the most powerful fan out of everything we tested. Photo: Marshall Troy

The Seville Classics UltraSlimLine 40″ Tower Fan simply circulated more air than any other fan we tested, as measured both in a controlled test environment and in a home’s living room and bedroom. It has a compact 11.15 by 11.6 by 40.1-inch footprint and a stable design that was the hardest to tip over of any we tried. It comes with the best remote control in our test group, a 7.5-hour sleep timer, and an oscillating mode that makes it easy to share the breezy wealth with your sweaty, overheated friends and family. It wasn’t the quietest fan we found—it put out 67 decibels on its highest setting—but it was quieter than an extremely pricey competitor. It’s also difficult to take apart to clean internally, but that was a problem with every tower fan we tested. 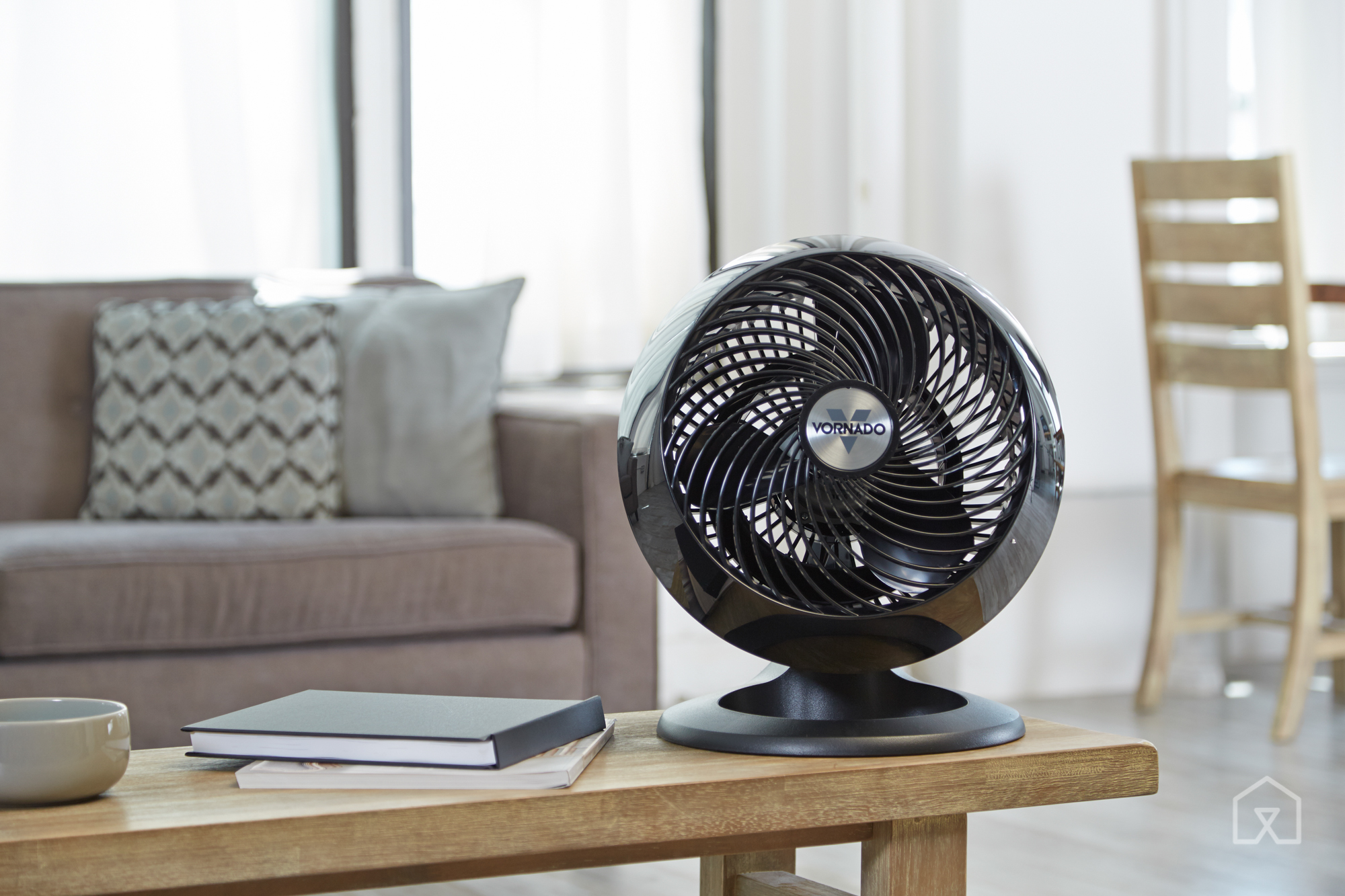 The Vornado 660 can’t oscillate, but it can move a respectable amount of air. Photo: Marshall Troy

If our main pick is unavailable when the warm weather hits, pick up the Vornado 660 Whole Room Air Circulator. It can’t move as much air as the Seville Classics UltraSlimLine fan (in our tests, the Vornado produced a CFM reading of 406 compared with the Seville’s 550). It’s also significantly louder, has a larger footprint (15 by 11.75 by 13.5 inches versus 11.15 by 11.6 by 40.1 inches), can’t oscillate, and doesn’t come with a sleep timer or a remote. But it does have easy-to-use controls, a robust build quality, and an industry-leading five-year warranty. 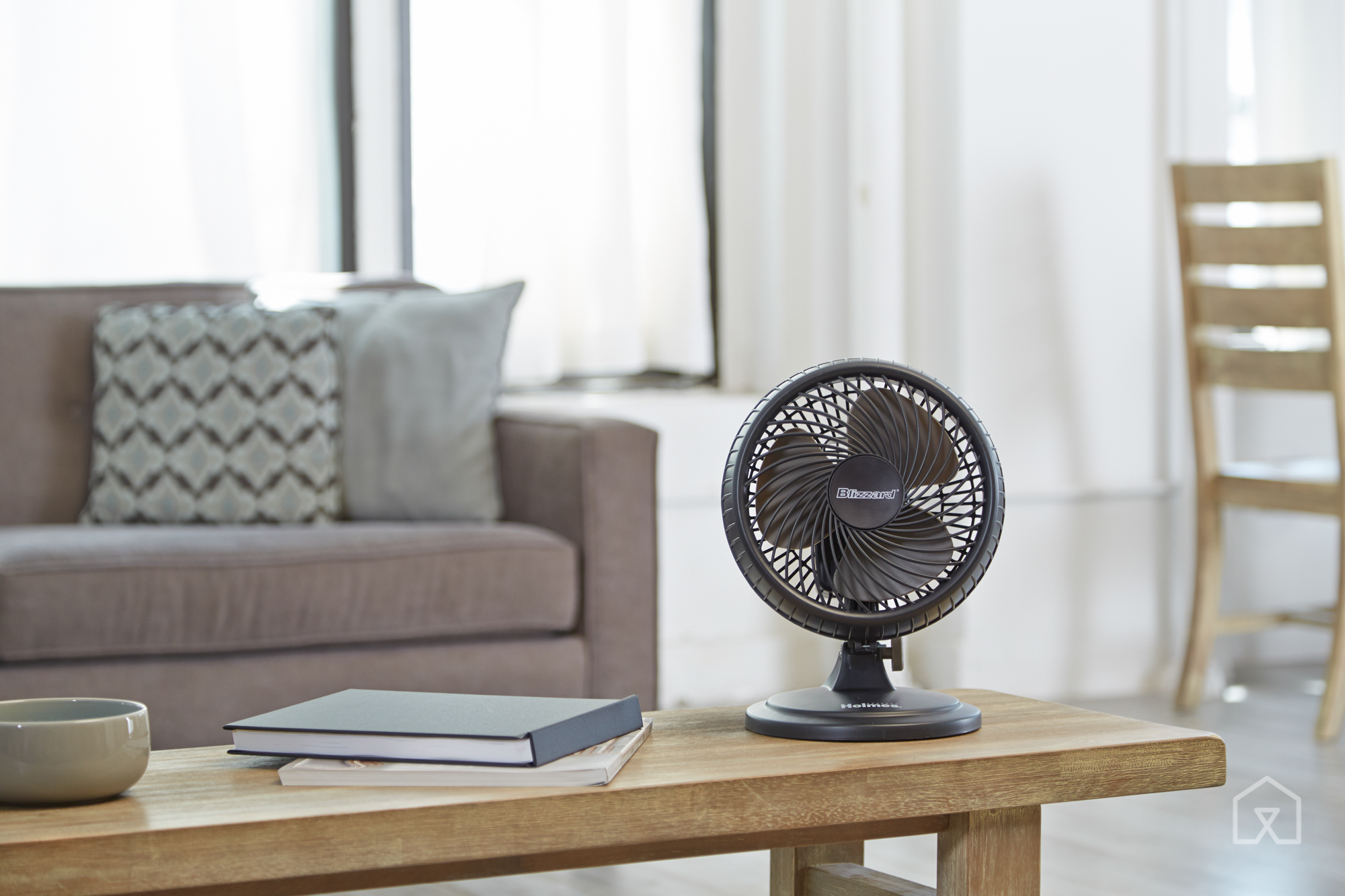 Powerful, a little loud, but capable of oscillating, the Lil’ Blizzard is a great little fan for a small amount of money. Photo: Marshall Troy

If you’re looking for a cheap, powerful fan to use at your desk, the Holmes Lil’ Blizzard 8-Inch Oscillating Table Fan is a great choice. When running on its highest setting, the Lil’ Blizzard produces 70 decibels of sound, which admittedly is a little loud. But, as its name suggests, the fan can oscillate or be locked into place. It comes equipped with two different speed settings, is easy to clean and—with its small 8.1 by 8.9 by 11.8-inch footprint—won’t hog all of the space on your desktop or side table. And though it might not be the most powerful personal-size fan that we tested (we’ll get to that in a minute,) the Holmes Lil’ Blizzard is a capable fan at a great price.

Best of both worlds 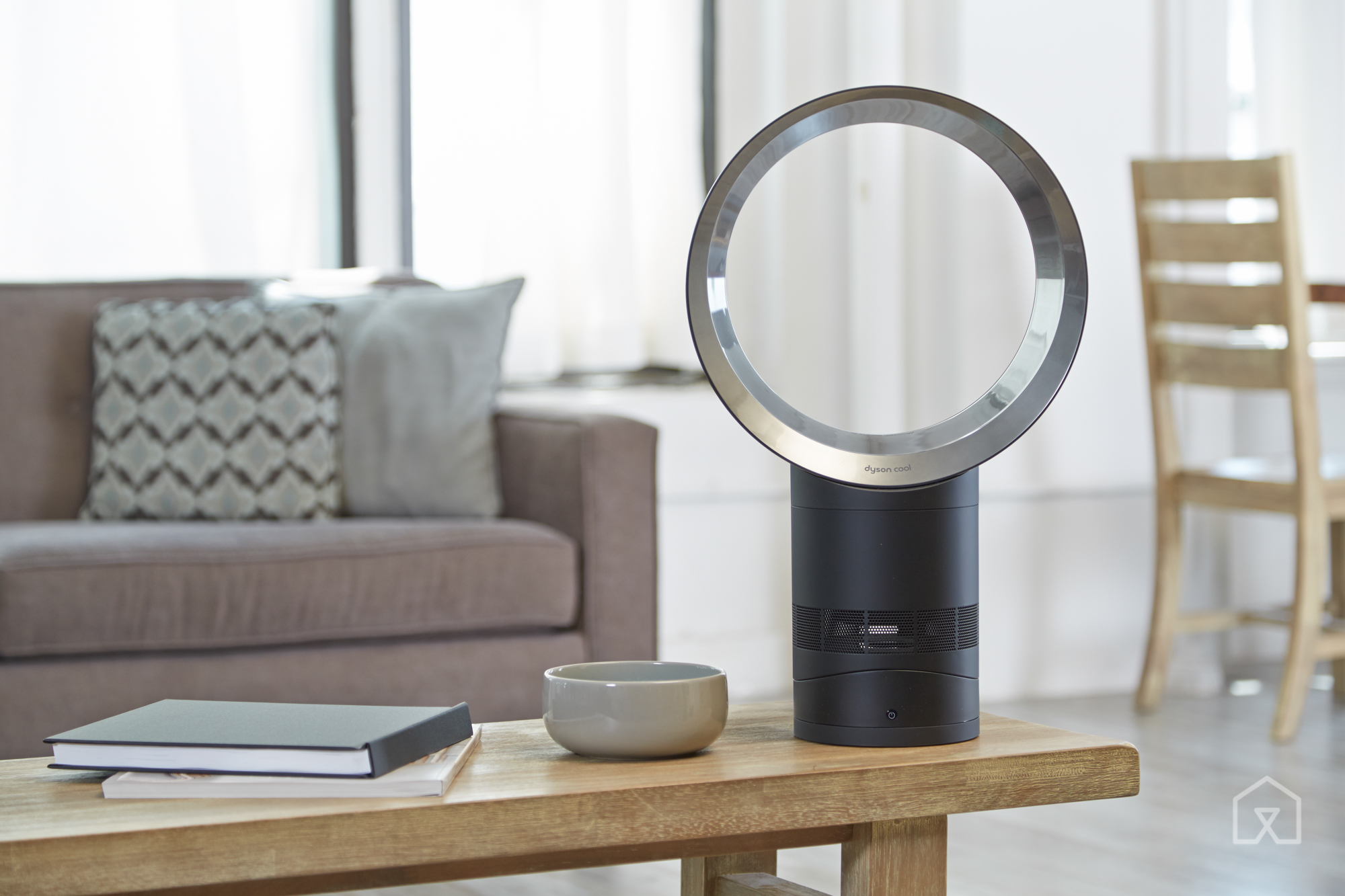 The AM06 is a compact, but powerful and feature-packed fan to consider if money’s no object. Photo: Marshall Troy

The very best desk fan we found is the Dyson Air Multiplier AM06 (and, at its price, you’d hope it would be the best). During our testing, the AM06 moved more air than any other desk fan. On its highest settings, this 4-pound, 5.8 by 12 by 19.7-inch fan could put out as much air as some of the room fans we tested—and it often worked as well as they did, despite being much smaller. The AM06 can oscillate in a 45-degree arc and it comes equipped with more speeds than any other fan—10—to help you dial in exactly the right level of air. Though it isn’t the quietest piece of hardware we tested, the noise it generates is of such an even quality that it helped me, a legendarily light sleeper and insomniac, drift off to a restful slumber. Other design details, like a sleep timer and a nicely shaped, small remote that stores on the side of the fan via a magnet, add up to a product that feels very polished. Last, it’s just handsome—that may sound superficial, but when you’re looking at something for three months straight, it’s nice to find it attractive. If you’re looking for a small fan that can fulfill multiple roles in your home (and you can afford to pay its current price of about $250), check it out.