WhatsApp can quote messages you want to respond to

WhatsApp now has the ability to quote messages you want to reply to, which sounds especially useful for group chats with friends or family. Only problem is, it’s unclear if everyone already has access to it. It first came out a day ago or so as an experimental feature for the Android app’s beta version (v.2.16.118). However, we were able to quote messages on our stable apps (v. 2.16.6) for Android and iOS without having to update either of them. Note that we also didn’t see a new update on iTunes or Google Play.

According to NDTV and some other sources, the Facebook-owned application already began rolling the feature out to the general public, so it’s possible that you can already use it. To find out if you have access to it, simply press on the message you want to respond to for a few seconds until the action bubble/bar pops up. Next to star, trash, copy and forward is a new option that looks like the arrow typically associated with reply. Click that, and the message you want to quote will show up right above your text box like in the screenshots below. If you can’t seem to make it work, try reinstalling your app or checking again in a day or two — you might have it then. 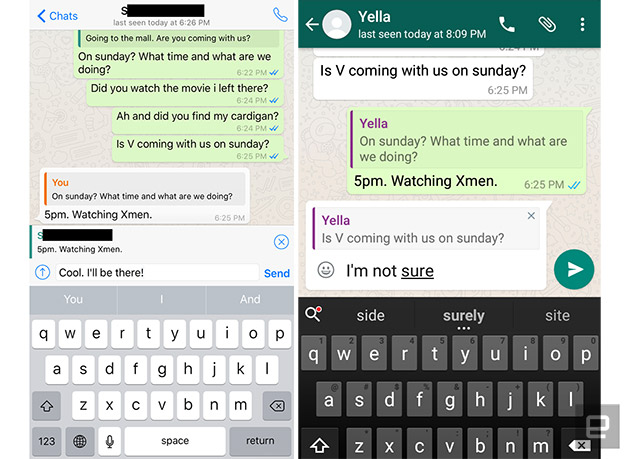