One of the more common complaints when it comes to smartwatches is their big, bulky, and often industrial design that sometimes looks out of place even on average-sized wrists, and seem to be catered exclusively towards men. While not the most compact smartwatch out there either, Huawei attempted to address some of these concerns last year with their Android Wear offering, the Huawei Watch, which featured a very elegant design, and one of the classiest we’ve seen thus far.

However, there was a market requirement that needed to be filled, and Huawei did just that, with the introduction of the Huawei Watch Elegant and Huawei Watch Jewel, first unveiled at CES earlier this year. While these devices will look great on anybody’s wrists, they were certainly designed with women in mind. Today, we’ll be taking a closer look at the latter, in this in-depth Huawei Watch Jewel review!

As was the case with the original Huawei Watch, the classy, elegant, and high-end experience that is on offer with the Huawei Watch Jewel starts not with the device itself, but the packaging as well. You get a beautiful unboxing experience with this smartwatch, with a stylish box that springs open to reveal the watch in all its glory, nestled within the soft, fuzzy, velvet interior, with the words, “timeless design, smart within,” printed at the top. Pulling up on the small gold handles, included to ease the struggle with lifting the internal cover, removes the encasing. Below this is where you will find the usual device documentation, the proprietary charging cable, the magnetic charging platform, and an AC wall plug. 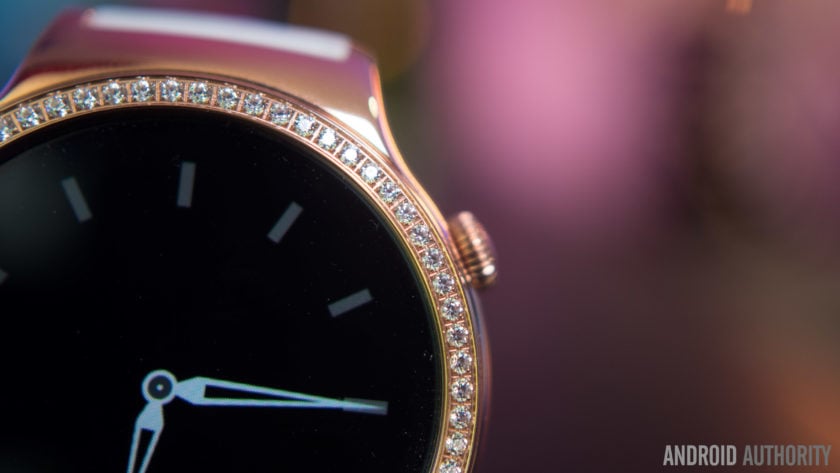 As mentioned, Huawei has released that two smartphones that have been designed to cater to women. The one we will be taking a closer look at in this review is the rose gold Huawei Watch Jewel, which gets its name from the 68 1.5 mm Swarovski Zirconia stones that border the display, while the other, the Huawei Watch Elegant, comes with a rose gold stainless steel body as well, but replaces the stones in favor of a knurled pattern ring around the screen. 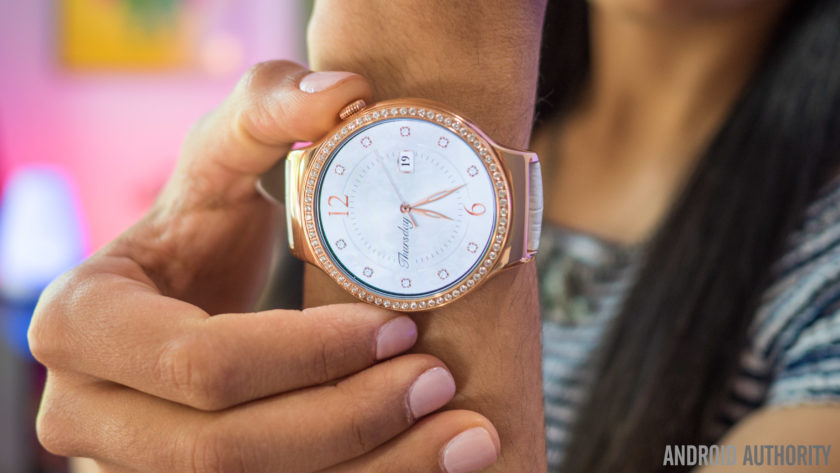 As is the case with its namesake, the Huawei Watch Jewel comes with a round display, which is the direction more and more Android Wear device manufacturers are heading, allowing for a more traditional look and feel. The round display can make viewing some content a little bit difficult, but in terms of design, this is definitely the better option. The crown is positioned for easy access at the 2 o’ clock position, and while it does rotate, it only functions when pressing it. Pressing the crown turns the display on or off, and a long press will take you directly into the Settings menu. 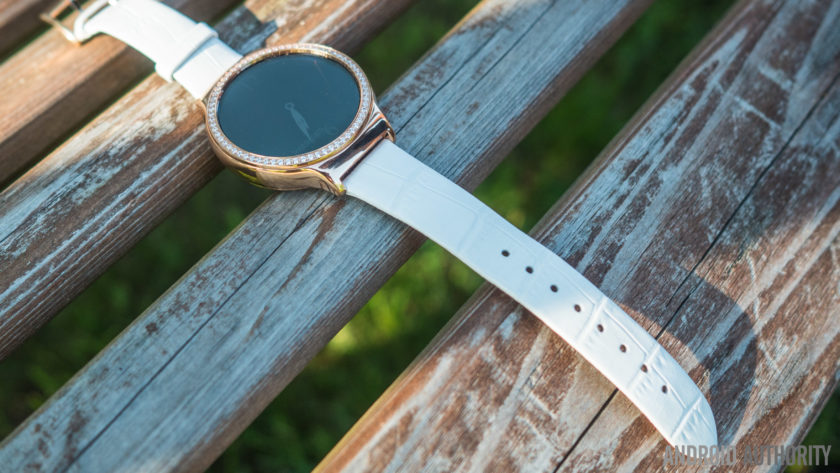 There are a few options available when it comes to watch straps, with the standard version of the Jewel and Elegant coming with blue and white Italian leather straps respectively. However, this particular review unit features a white leather strap with a snakeskin pattern, that adds to the overall elegance of the watch. With a width of 18 mm, the band itself is thinner than the 21 mm strap that is available with the original, which not only puts a bigger emphasis on the watch itself, but allows for it to sit very comfortably on the wrist. 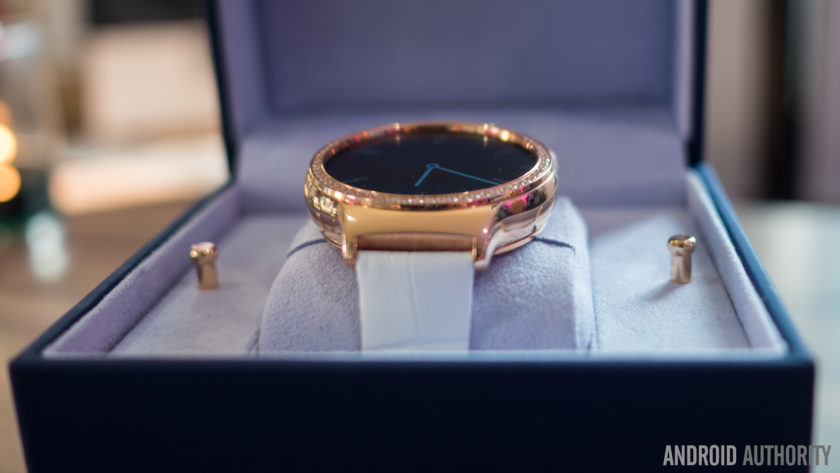 That said, the new designs mean the Huawei Watch Jewel body is actually larger than the original Huawei Watch, with the diameter increased to 44 mm from 42 mm, and the thickness bumped to 12.45 mm from 11.3 mm. The large size can take some getting used to, but actually adds to the elegance of the design by offering ample space for the larger number of stones. Yes, it’s certainly bigger but it’s not unbearable and considering the added stones and increased beauty, the larger design is not an issue. 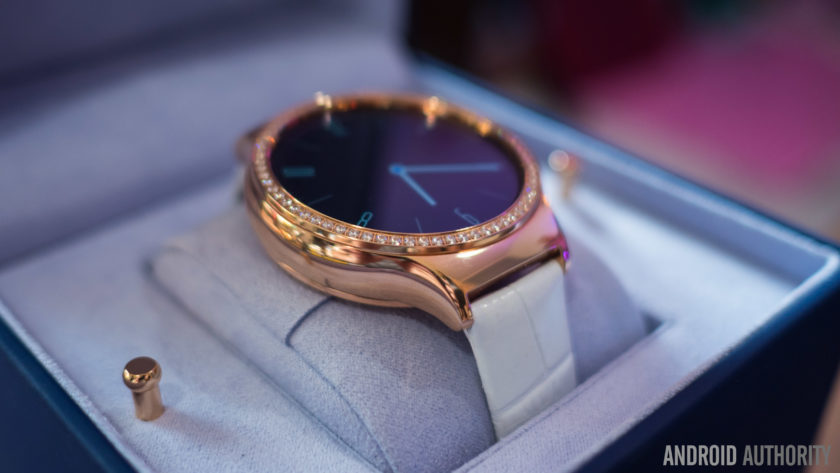 This watch may be the rose gold version, but you don’t really see the pink hue that is usually associated with this color option. In fact, it looks much closer to the regular gold version, with a pink tinge appearing only when the body of the watch catches the light at the right angle.

The striking element of this design has to be the jewels, 68 1.5 mm Swarovski Zirconia stones, that are encrusted into the top ring. These stones don’t fail to sparkle regardless of what the lighting condition is, and will definitely catch the eye and turn heads. However, this ring around the frame sits high up and above the level of the display, which can make it a touch difficult to pull menus from the sides of the screen with your finger. 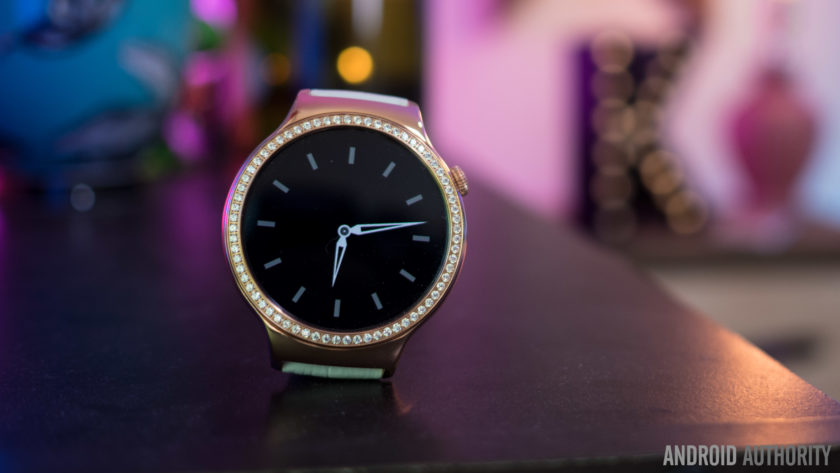 The Huawei Watch was already a stylish and flashy smartwatch to begin with, but the company takes things to a whole other level with the Watch Jewel. It may seem a little out of place in certain situations, and is difficult to pair with more casual attire. For example, the Watch Jewel will certainly stand out like a sore thumb if you are planning to wear it to the gym. That being said, the design is absolutely fantastic, and the rose gold version of the Huawei Watch Jewel is definitely one of the most flashy and luxurious smartwatches that is currently available in the Android Wear space. Apart from the design, everything else remains the same when comparing the Huawei Watch Jewel and its namesake. As such, the Watch Jewel also comes with a 1.4-inch AMOLED display, with a 400 x 400 resolution, and allows for one of the best smartwatch display experiences available right now.

Using an AMOLED display has its advantages, with it helping keep the watch from using too much power, given that for the majority of your day, the watch will be in an ambient mode, that utilizes a black background, with a white outline of your watch face. Not only does this look great, with the deep, inky blacks that are seen, but there is a lot of power saving here, with only around 10 percent of the display being lit. 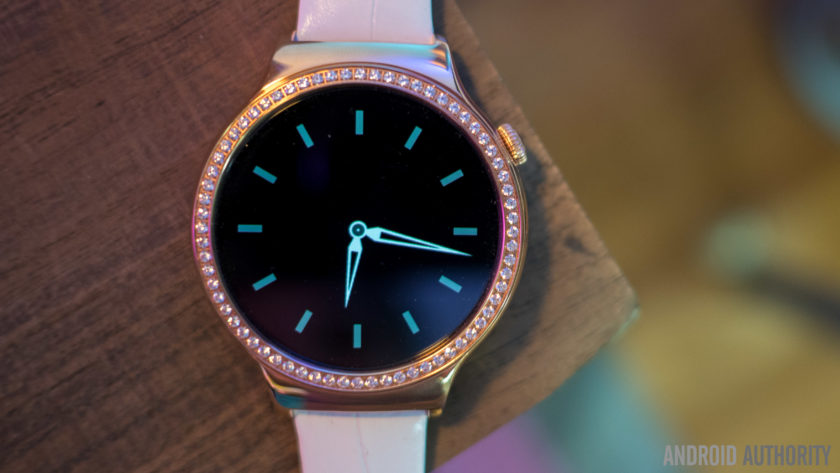 The major gripe with the Huawei Watch is the lack of an ambient light sensor, which means that the brightness of the display has to manually be set by you. At the highest levels, it can be blindingly bright in low-light conditions, and will require a little more micromanagement than you’d like. The good news is that the brightness at the preset level proves to be good enough to allow for comfortable outdoor visibility. As mentioned, things under the hood remain identical to the Huawei Watch. What you get here is a Snapdragon 400 processor, backed by 512 MB of RAM, which is the standard processing package as far as Android Wear devices are concerned. 4 GB of on-board storage is also available for those looking to locally store any data, like music. Android Wear isn’t very processor-intensive at all, and as such, the performance is as smooth and snappy as expected, with no notable performance issues found with the Watch Jewel.

The Watch Jewel comes with a 300 mAh battery, which stands up well to Huawei’s claims of the device allowing for 1.5 days of use. However, this does mean that you will find yourself having to at least top up the charge everyday. Included in the box is a magnetic charging platform, which isn’t the most elegant solution when it comes to charging your smartwatch. Although it is magnetic, you still have to make sure that the pins line up correctly before snapping it into place. It can be quite annoying to get this alignment right, and if you aren’t careful, you may end up with an uncharged watch the next day. 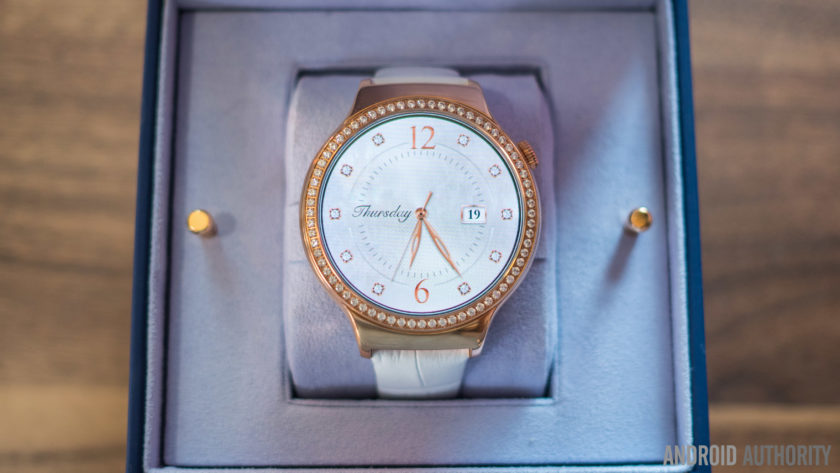 The Huawei Watch Jewel is running Android Wear, and if you’ve ever used an Android Wear smartwatch before, you will be right at home with the software experience, given that it is identical across the board. Notifications are found in the form of cards, and you have the option to dismiss them, or swipe to the left to further interact with them. There’s a pull down menu for certain settings, and swiping to the left on the watch face brings up apps, contacts, and Google Now. It is a very streamlined and simple experience, and provides a great way to help avoid having to pull your phone out of your pocket every few minutes. 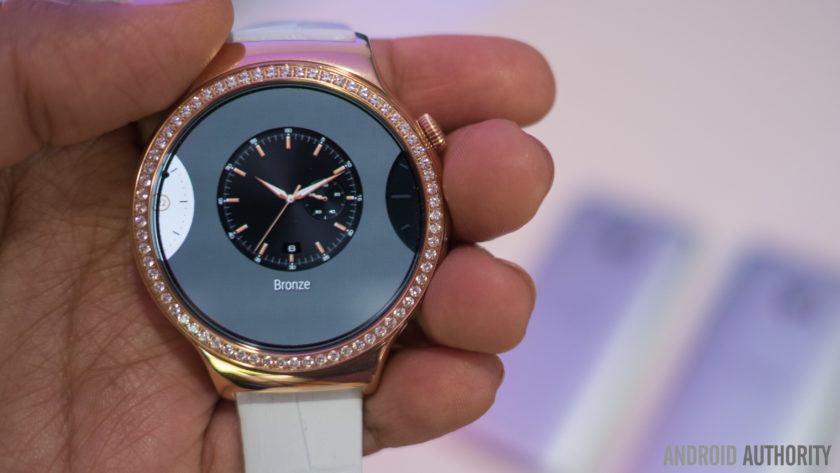 Android Wear can best be described as a notification center, and while Huawei as included their own Health suite, things remain largely the same. However, there are big exciting changes coming with Android Wear 2.0, which will take the Huawei Watch Jewel smartwatch experience to an entirely different level when it is released later this year. 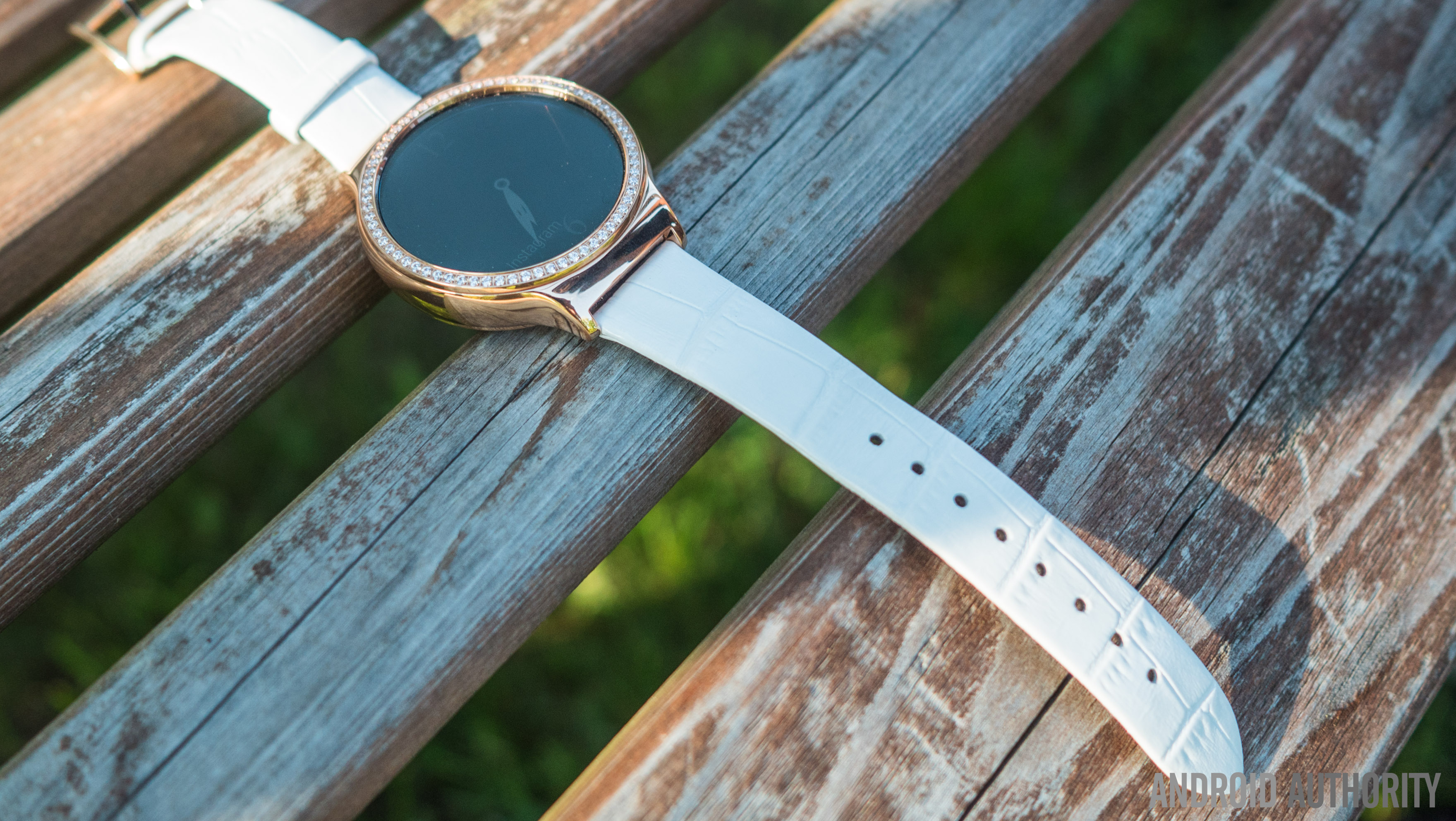 The Huawei Watch Jewel is priced at $599.99, with the Elegant iteration without the Swarovski Zirconia stones available for $100 less. 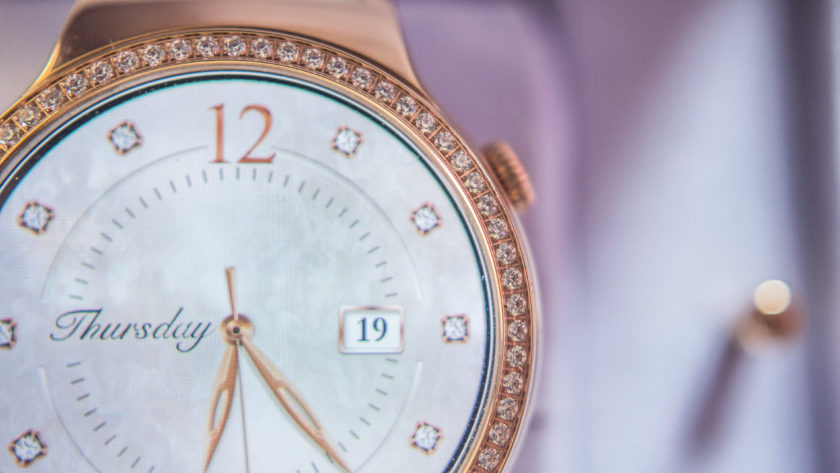 So there you have it for this closer look at the Huawei Watch Jewel! Between the beautiful AMOLED display, and the elegant crystals that surround it, the Watch Jewel is in a class of its own. It is admittedly very flashy, which can be a turn off for some users, but some women will certainly appreciate that there is now a smartwatch available that was designed with them in mind.

The Watch Jewel is also definitely on the higher side of the price spectrum, and if you are looking for something a little less showy, the Watch Elegant is priced at a 100 dollars cheaper. However, the new designs are certainly worth the price, and if you are in the market for a elegant, classy smartwatch, the Huawei Watch Jewel is one of the better options out there.