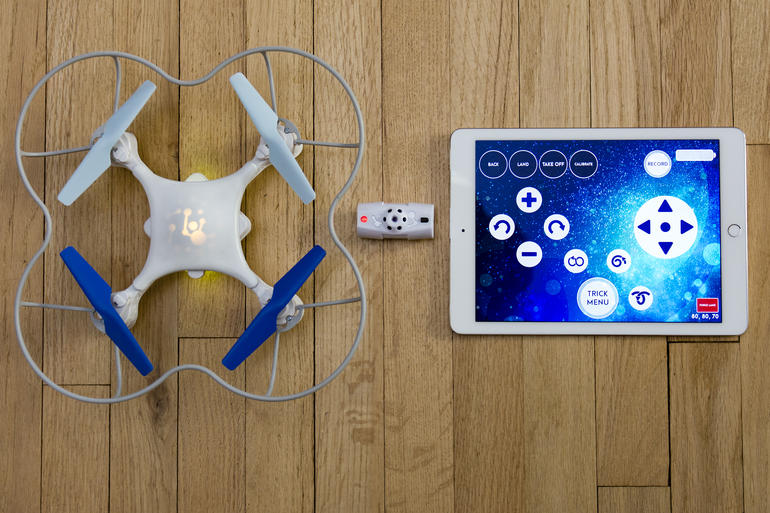 WowWee’s Lumi is an indoor-friendly drone.

The Lumi answers the question of “what else can you do with a toy drone besides fly it around and crash into stuff?” In fact, it’s designed to do the opposite of those things by basically flying itself and avoiding obstacles.

Developed by robotics toy maker WowWee, the drone uses the company’s BeaconSense technology to immediately stabilize itself once it’s in the air. Place the small beacon studded with infrared lights on the ground (it’s the device between the iPad and the drone in the picture above) and tap “Take Off” in the companion Android or iOS app and the drone shoots a few feet in the air and hovers around the beacon.

Once it’s in the air, you can use the app to fly the Lumi around like you would any other quadcopter — it can travel up to 4 meters (13 feet) away from the beacon — but that’s almost missing the point. WowWee includes a trick mode for doing flips, rolls and a figure eight with just a tap. These moves can be compiled into your own choreographed sequences and set to your own music, with the Lumi using beat detection to move to the music. 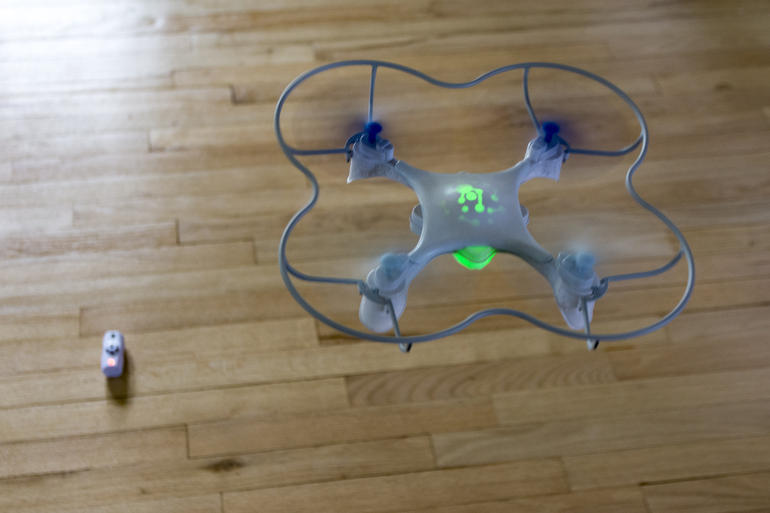 The Lumi’s beacon is what keeps it hovering in place without your help.

And then there’s the Lumi to the Beat game. On your device’s screen there are red, yellow, green and blue circles. Once in the air, the Lumi starts changing color and you have to tap the corresponding one. If you’re too slow or hit the wrong color, the drone will slowly descend until it touches down and the game ends. You can even compete against a second Lumi to see who can stay in the air the longest.

I played around with a preproduction Lumi and it shows a lot of promise. Everything wasn’t working yet, but the beacon worked well, keeping the Lumi hovering around it without my help for up to about 8 minutes. You can also pick up the beacon and walk with it and the drone will follow you. But the obstacle avoidance system that will prevent it from bumping into people and things wasn’t working. Because of that, though, I can tell you the Lumi can handle crashes, and its flexible prop guard helps protect your ceilings, walls and furniture.

One reason the Lumi isn’t finished just yet is that WowWee is looking to the Indiegogo community to help grow its capabilities before it heads to stores in September. Backers can pledge $59 (approximately AU$75 or £40) for a Lumi starter pack with a drone, a beacon and three batteries. However, you can also pledge up to $130 (AU$170 or £90) and get an Advanced Maker Kit with a telemetry kit for access to Lumi’s flight data and larger beacons that can be used as waypoints for the drone to automatically fly between. The drone will have an open application programmer interface (API), so you’ll be able to create your own games. A software development kit (SDK) is expected to be available in September.

Basically, the WowWee Lumi isn’t your average toy drone. Like more expensive models, the Lumi’s capabilities will grow over time. Or you can take it into your own hands and use it as a platform to grow your programming skills.