Magic Instruments’ digital guitar makes it easy for anyone to jam

Magic Instruments co-founder and CEO Brian Fan knows the pain of learning new instruments. A Juilliard-trained pianist before starting his own company, he spent years trying to learn the guitar, only to put it down after realizing that all his work didn’t help him suck any less. What young, would-be rocker hasn’t been there? His version of rising to the challenge was a little different than you might think, though. Rather than dedicating another chunk of his life to mastering the basics, Fan dedicated a chunk of his life to building a new kind of guitar. He calls his $299 Bluetooth-connected brainchild a “digital rhythm guitar,” and its raison d’etre is to let anyone to feel the thrill of playing music.​

Now, here’s the thing: It isn’t meant to teach you how to play a real guitar. Some aspects of using the rhythm guitar, like strumming its six strings, can unintentionally help with your traditional playing. Still, there’s plenty of hardware out there specifically meant to make you a better guitarist. Instead, this is meant to get you playing music quickly; to more easily experience the unique joy that comes with powering through a Bon Jovi tune in one shot. 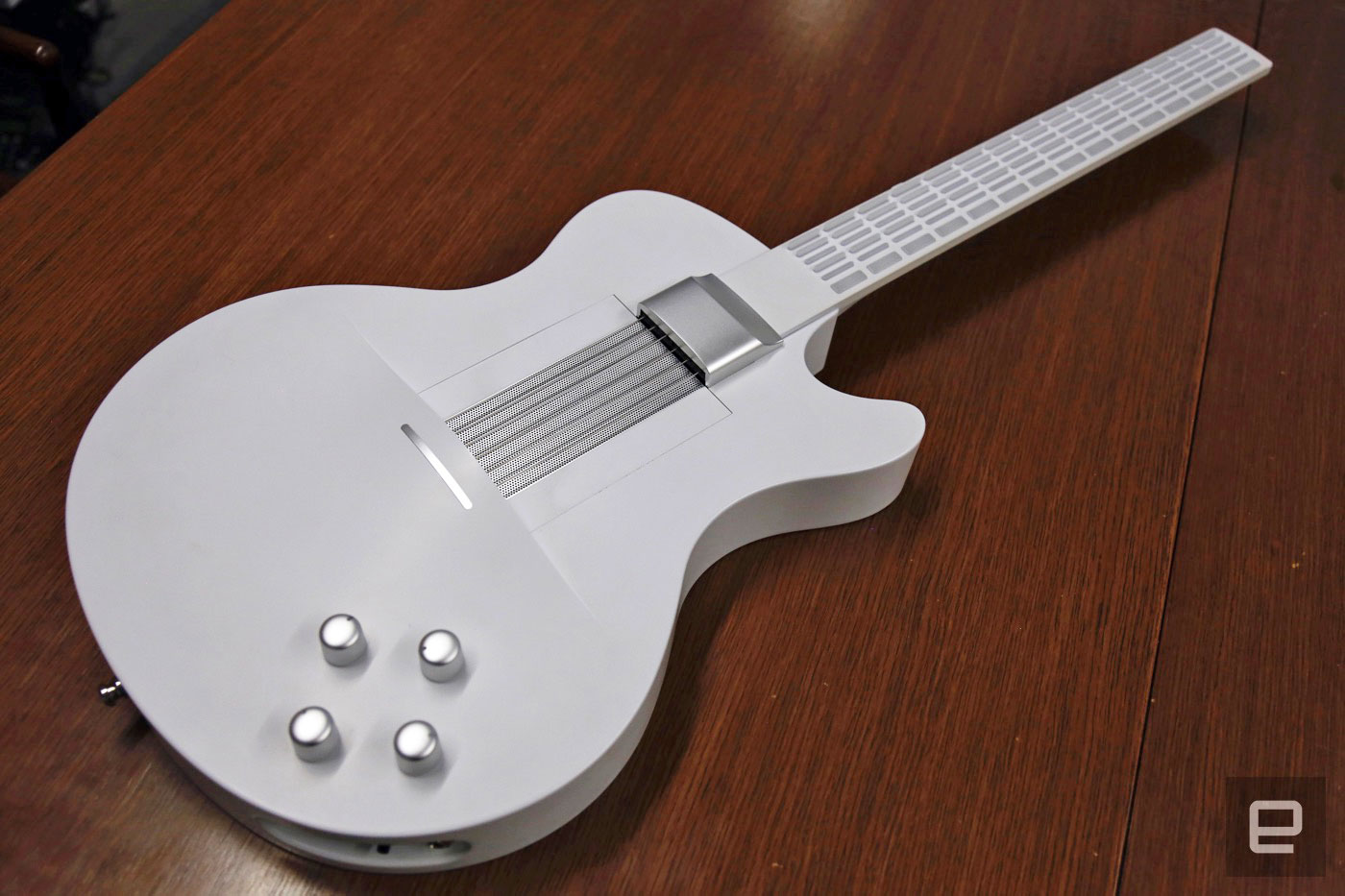 The Magic Instruments formula has two parts. The first is a big plastic guitar (available in either black or white) that has a distinctly Les Paul vibe to it. (The company also considered a wooden version, but eventually shelved it.) From a distance, it’s nearly indistinguishable from a regular electric guitar. A quartet of effect-selector knobs sits low on the guitar’s body, just where you’d expect them to be. There’s also a standard 1/4-inch output for running the thing into amplifiers. The differences are only apparent when you get up close. Next to that amp output is a headphone jack and a MIDI-out to make the guitar play nice with Logic Pro or Ableton. There’s a speaker between where the pickups on an electric guitar would be. Most importantly, though, the fretboard is full of buttons. Holding the fat button on the right side of a fret and strumming the strings plays a root chord, while strumming and holding a different button on that fret allows you to plays a variation of that chord. As you move down the fretboard, you get different root chords and, well, that’s the long and short of it. If you’re feeling fancy, you can do some fingerpicking too; the strings vary in volume depending on how hard you pluck them. Eight AA batteries power the device, and the body itself is only a little lighter than most electric guitars. In other words, this is no chintzy Guitar Hero controller. 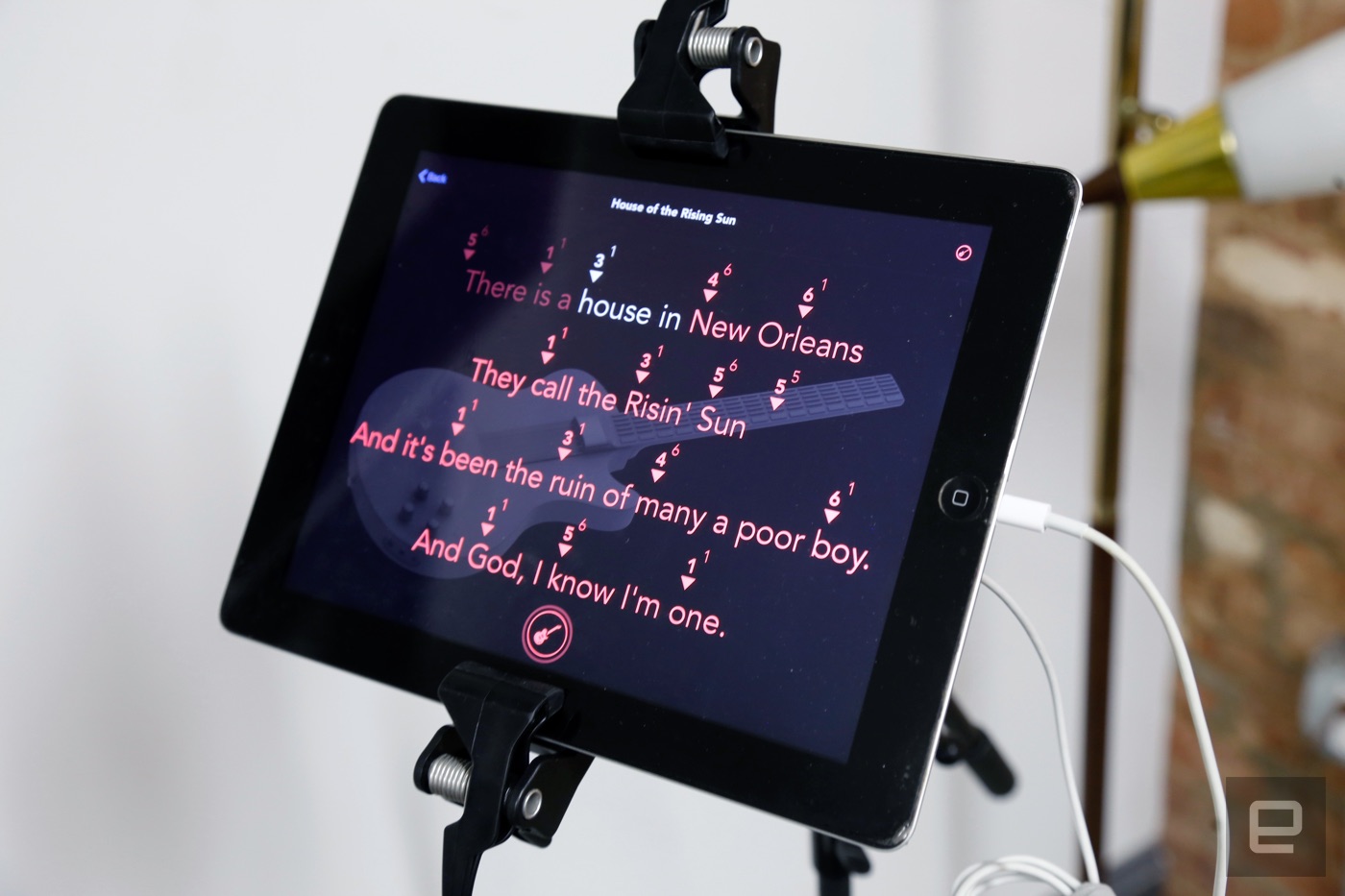 The other half of the setup is an app for iOS and Android that contains the equivalent of sheet music: carefully annotated, karaoke-style lyric pages that scroll as you play the right notes. You can buy songs for $0.99 a pop, or shell out $6 a month for unfettered access to Magic Instruments’ entire catalog. To that end, Fan says that music publishers have been surprisingly open to letting Magic Instruments sell their stuff. After all, the overlap between people who buy sheet music and the people who’ll buy digital files to jam with on a plastic guitar is probably close to nil. Marking all that music up for use with the guitar’s companion app is going to take some time, which is partially why the team isn’t planning to ship its first units until early 2017. 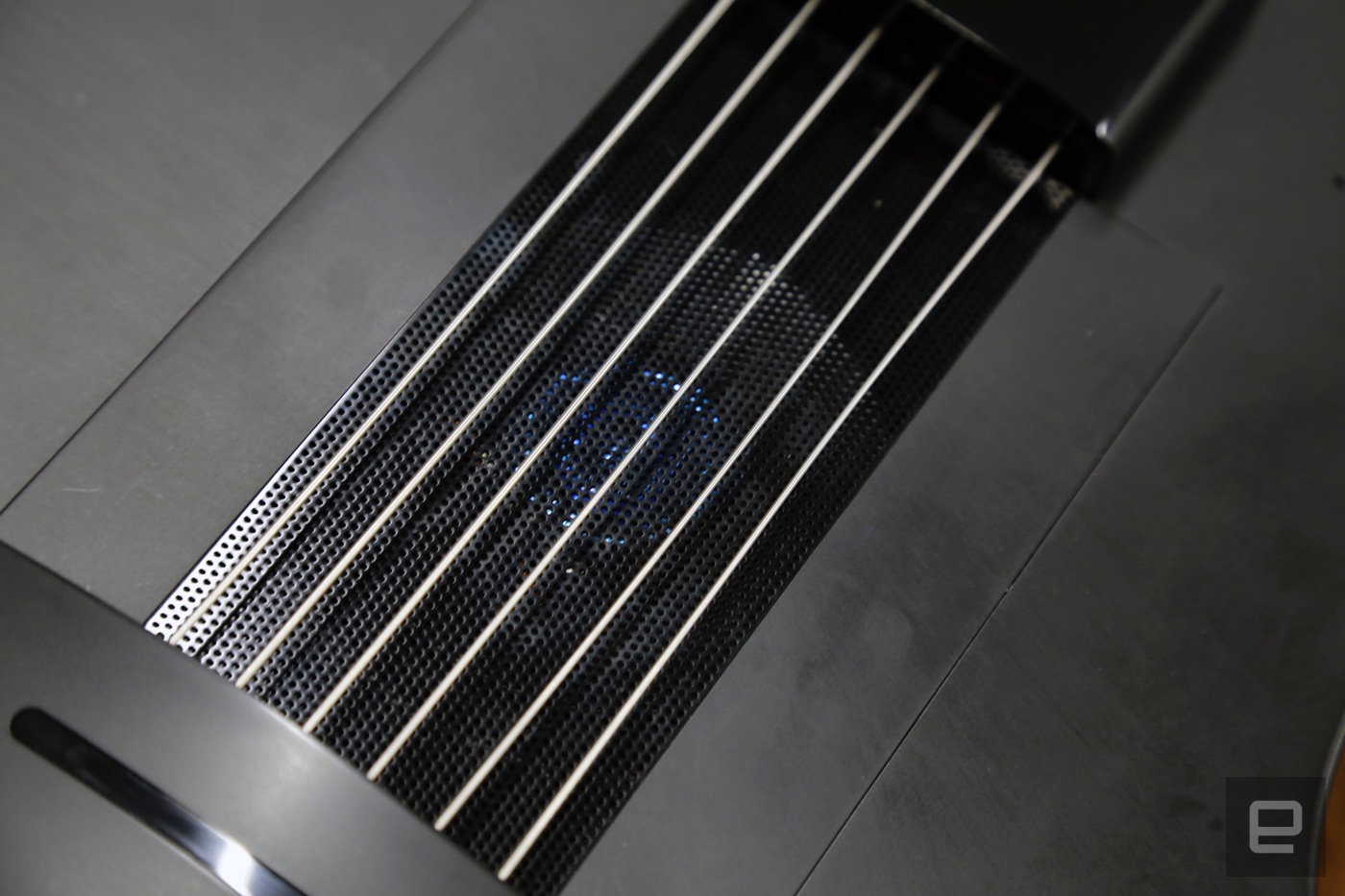 As you might expect, Fan’s vision has drawn its share of haters: people who feel the ability to play music is something to be earned through dedication and practice. I’ll be honest, I sort of felt the same way when I first met him. Once upon a time, I got an electric guitar for Christmas, and wouldn’t you know it: wee Velazco was god-awful. I plugged away at it for ages, but even now, I can just barely noodle my way through the classics. I suck at playing guitar because I never put in the time; wouldn’t using MI’s rhythm guitar feel like a cop-out? Personally, I got over that quickly. My strumming was terrible and it took a minute to get used to the kooky fretboard, but after a while I started to feel… cool? The nagging voice saying “you’re not really playing guitar” gave way to “well, you’re playing something,” which eventually led to “you’re really playing this thing!” The experience is, for lack of a better phrase, fun as hell. It’s also obviously not for everyone. 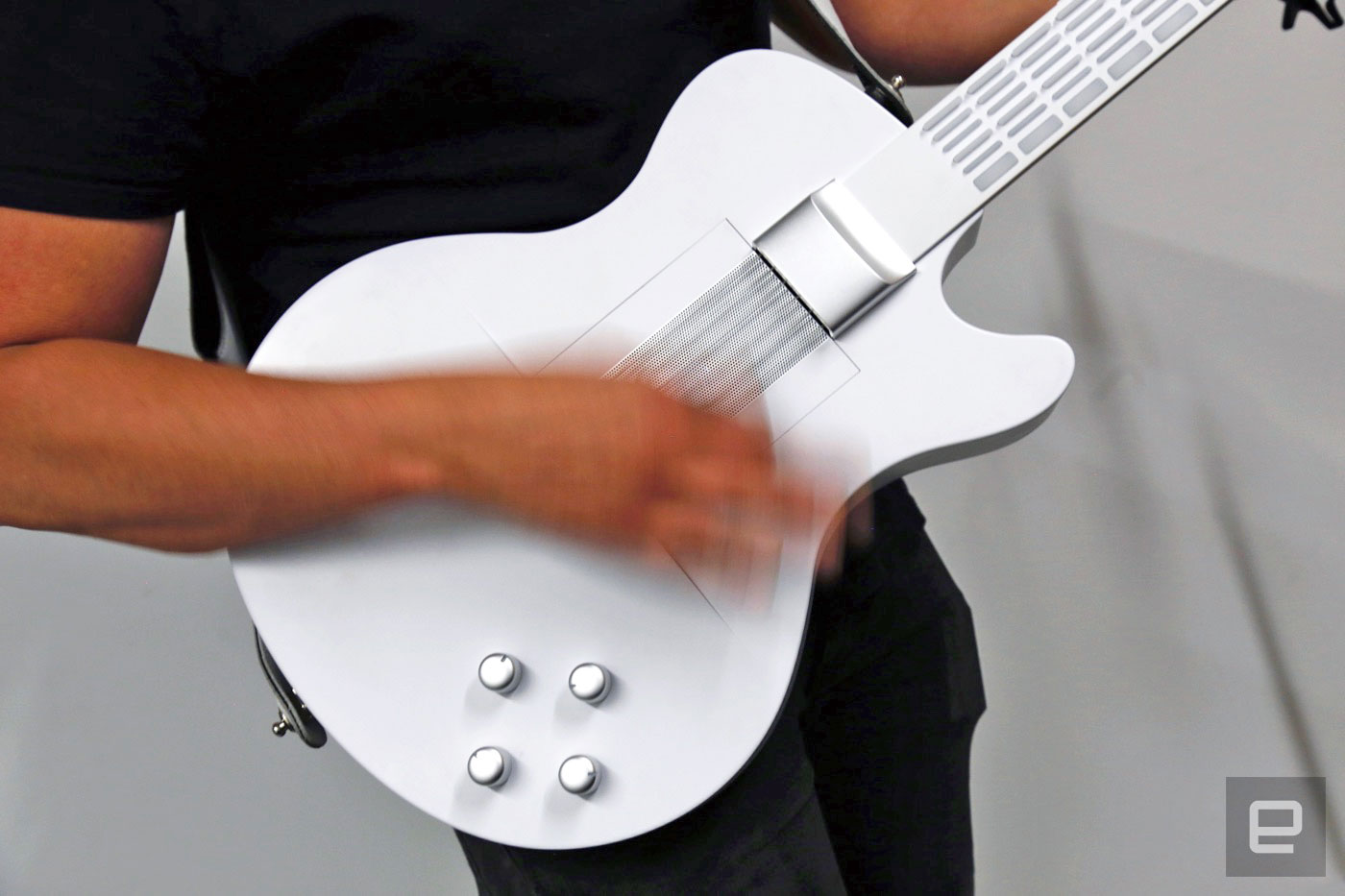 Ultimately, haters will still consider the Magical Instruments guitar as a toy. That’s an awfully reductive way to look at it, but let’s say you agree with them: Does it really matter as long as you feel good playing it? The most rapturous pieces of music in history were crafted by people with an immense grasp of theory and instrumental mechanics, but Fan doesn’t think they should get to have all the fun. With a new Indiegogo campaign and a full release on the horizon, we’ll soon see who was right.

Read more from News
← Engadget giveaway: Win an LG G5 courtesy of Spigen!
What is Magic Leap and why might it kill all screens? →