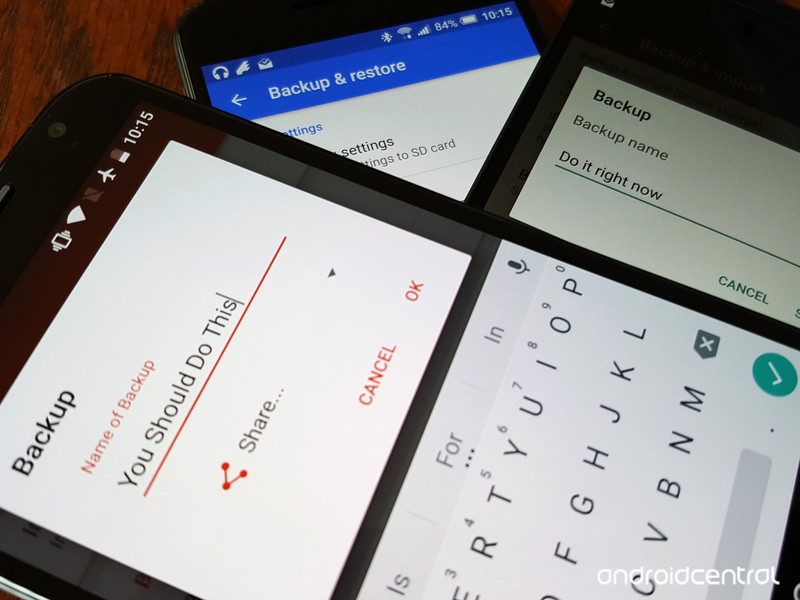 You backup your photos, your music, your documents… Why not your launcher?

We’ve all been there. Just got a brand new phone, still figuring out where all the new features and apps are laid out. But when you go to find one of your favorite apps… it’s not where it was on your last phone. And your app drawer isn’t organized quite the way we had it before. You search and you search, and when you find it you drag it back to where it was on your old phone.

No more. There is a better way.

Not every launcher can be backed up. Fortunately there’s a lot of launchers that can out there, and most of the good ones have options to import your current home screen layout. There are an absurd amount of launchers out there, and while we can’t cover them all, we’ll cover the larger ones, which cover the various types of backups and methods you’ll encounter with your own chosen launcher (should your launcher have one). 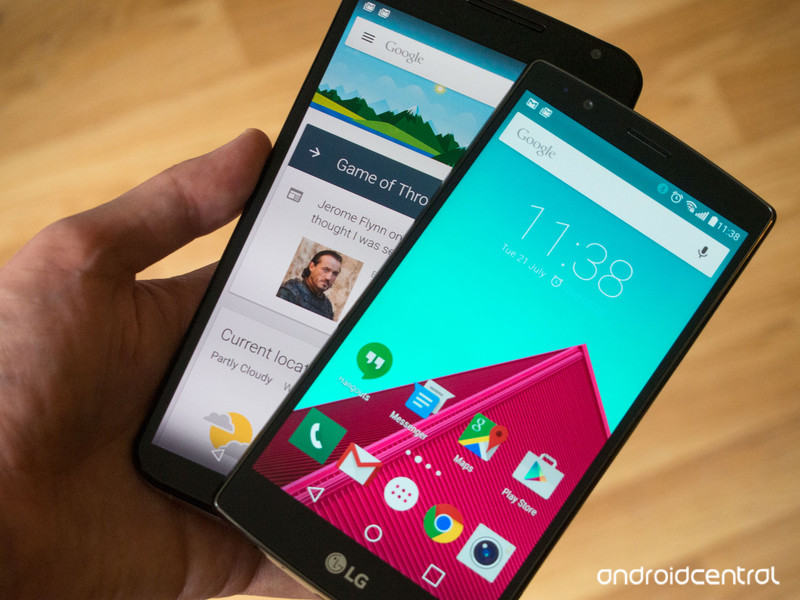 For those who don’t use a lot of widgets and don’t want to hassle with making their own backups, this is excellent. Even for those of use who use other launchers, at least we have some of our apps in order while we wait for those apps to be downloaded.

Nova Launcher, one of the mainstays of the home screen replacement market, does a lot of things really well. It especially does backups really well. A backup does no good if it’s just going to sit on the device itself. We create these backups so that we can restore them if the device fails, or so we can easily bring them to a new device. That means your backup needs to go to the cloud, or at least to another computer. And with Nova, creating your backup and pushing it to the cloud is combined in one step.

We create a new backup by tapping the aptly-named Backup in Backup & import settings inside Nova Settings. The command window that pops up allows you rename the backup on the spot, and then gives you the choice to save to Device Storage, Document storage, or to Share the backup to another service, like Google Drive. You select your service and the backup is created and uploaded immediately. To restore a backup, you’re once again given the choice between Device storage or by browsing the Document storage, which will plug into Google Drive and other cloud services installed on the device.

A note on widgets in Nova backups: while it won’t automatically restore the widgets you were using, Nova backups include placeholders for your widgets in the place, size, and app you used. You need to tap each widget and set it back up, but at least

Now we start getting into backups that take a little more effort. Action Launcher does have a dedicated Backup section in Action 3 Settings, however it’s not as intuitive as it looks. I will say that at least Action Launcher warns you about how widgets work in their backups. Like Nova, Action Launcher will back up a placeholder for your widget. However, when you tap it, you will have to select what app and widget template it’s based on, as opposed to Nova, which remembers the app and template.

You can name your backup when you save it, but it can only be saved to one location. You can’t even change that location, though Action Launcher lists the location for you to navigate to with a file manager app. So, if you want to save a backup to Google Drive or another cloud service, you’ll have to create the backup in Action 3 Settings, then navigate to the Backup location in your file manager, and share the file to the cloud. Likewise, when restoring a cloud backup, you’ll have to download the file, copy it back into the Backup location, and then restore it from Action 3 Settings. 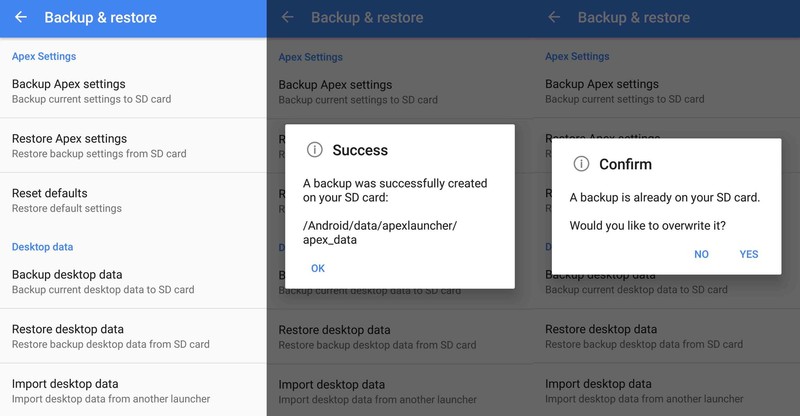 Apex Launcher’s backups are a bit of a double-edged sword. See, you can back up your Apex (launcher) settings and Desktop (home screen)settings separately, but you can only have one backup in the folder at a time. So if you’re wanting to back up and restore several different themes on one device, you’ll have to create that Desktop backup, navigate to the backup folder, and copy it somewhere else before you create another backup, otherwise your new backup will be written over the old one.

How do you find the folder that it’ll be backing up to? Since the app wasn’t gracious enough to tell you, you’ll have to go rooting around your file manager looking for it. Apex hides their backups in the Android/data/apexlauncher folder, but there’s not a lot of standardization among launchers as to where they save them. Lightning Launcher, one of the more technical launchers out there, sends its backups not to the Android/data/[app] folder, but rather to a “LightningLauncher” folder it creates in Internal Memory. You may have to look two or three different places before you find the folder, but at least you can find it and offload it to whatever backup platform you’re using.

Do you back up your launcher right now? If not, you really, really should. If not for yourself, then do it for whatever poor sap is around you while you’re setting up your next phone. Backups are also really useful to have if you’re the designated phone guru for your parents/siblings/grandparents/coworkers/miscellaneous friends, as it means that if they muck something up, you can put things back how they expect them to be and get on with your day.

Read more from News
← Add a map, photo and customizable button to your Nexus with Google’s new case
HTC 10 versus Galaxy S7: A grown-up rivalry →