Control app access on your kid’s device with Limitly (review)

With the increasing amount of available apps in the Play Store, as a parent, you may want to limit what your children are using on their devices. After all, the internet can get ugly really fast. This is why developer Pumpic has released Limitly, an app to limit how other apps installed on your phone or tablet are used. 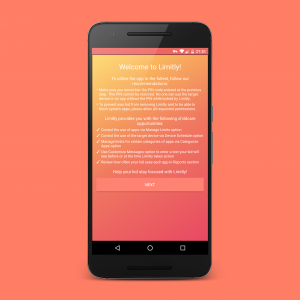 Limitly explains very clearly what you can do with it and why it asks for certain things.

Because of the nature of this app, setting up Limitly takes a few steps. Opening the app will take you to a screen where you have to type a 4-digit PIN. This is the password that will be used to unlock the app itself, in order to prevent unauthorized tinkering with its settings. Also, when an app is locked, you can force unlock it by using this PIN.

After completing this step, Limitly will show you a welcome screen with a description of the different functions available. Contrary to a lot of apps, this one also explains why it needs to become a device administrator. Since this product is aimed at parents who may not have a full understanding of what a device administrator is, it’s a good thing to see an explanation here.

It will also request to permit usage access, which allows the app to create reports on how often you use apps, how many times it has been launched, and other very specific numbers that will be explained later.

Inside the app, the first screen you’ll see is called Manage Limits, which is Limitly’s bread and butter. It will display a list of all apps, their status (such as active, blocked and limited), their number of launches and their last launch.

Selecting a specific app will take you to a preliminary screen where you can get a report (more on that later) and, at the bottom, you can block the app or manage its limits. Blocking an app means that, for all intents and purposes, the app will be blocked, no questions asked. Limiting an app will let you specify per-day limits, where you can block an app a specific day, limit it by time usage (for example, don’t dwell on YouTube more than two hours per day), or block on specific hours (e.g. from 9:00 AM to 11: AM). 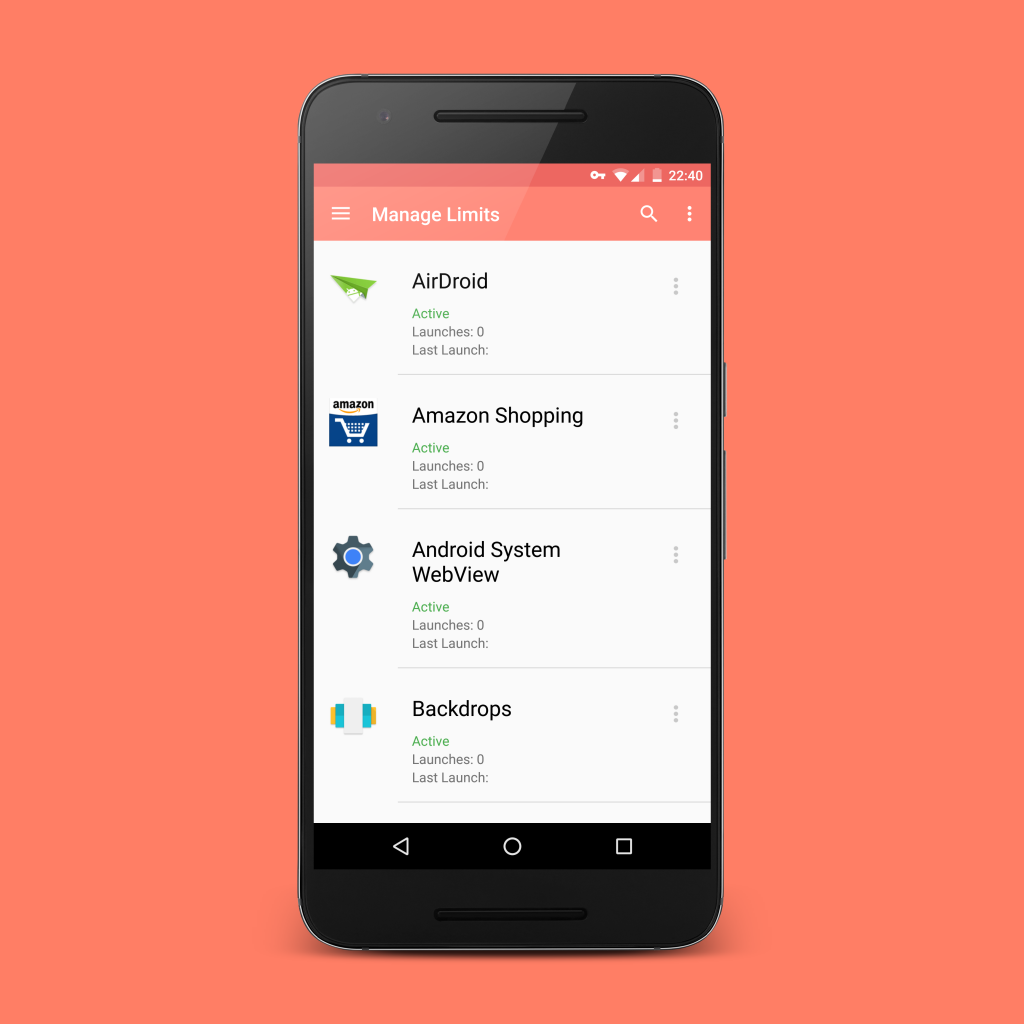 You can manage limits and blocks on a per-app basis.

If you decide that your kid must not use their phones on a specific day or period (Sunday is family day!), then you can block the device altogether. Just go to Device Schedule in the menu, select your settings and the phone will be locked. Harsh, but it has to be done sometimes.

You can also categorize apps yourself. Just go to the Categorize Apps options, create your categories with the desired apps, and now, when accessing the Manage Limits screen, you can select your categories using the overflow option at the upper right corner.

Limitly offers a bit of personalization by letting you customize the messages your kid will see in several situations, such as when an app is blocked, when an app is close to its time limit or when the whole phone is blocked.

Finally, you can also see detailed usage reports of all installed apps through the Reports option. Things like number of launches, duration of all sessions, limits reached, and logs can be seen on this screen, filtered by day. 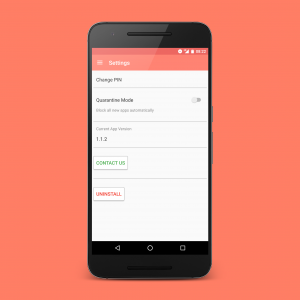 There are a few options you can change, plus a handy uninstall option.

There are a few options to choose from, but all of them are noteworthy. You can change your PIN, in case your kid accidentally discovers it or something.

You can also activate Quarantine Mode, which automatically blocks newly installed apps. If your kid decides to install a new app to replace one that’s currently blocked, you can rest assured knowing that the new app will be blocked too until you decide what to do with it.

Completely coated with Material Design paint and native elements, the app looks good and it uses a peach color that isn’t an eyesore. The app adds some really clever settings to make it more useful to parents. One example is quarantine apps, which is a neat idea that prevents unauthorized access to new apps.

The app works well under certain conditions. I’ve noticed that the app sometimes takes a couple of seconds to kick in, but after that, it won’t let you use the app unless you input the PIN… Or unless you do a specific key combination. 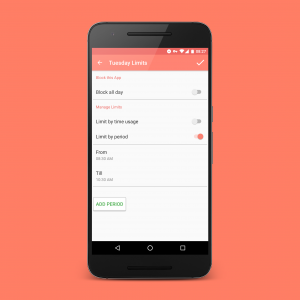 Limits can be configured by several parameters, but you can’t edit them in bulk.

On my Nexus 6 running Android 6.0.1, I could block an app, then open it and receive the block screen. Pressing the Home on-screen button, and returning to the app would result in the app being unblocked. This was tested on multiple apps, and some apps blocked themselves again after several seconds, but others didn’t. I imagine a kid will discover this soon enough.

It is important to note that I didn’t found a way to unblock my phone when the Device Schedule was turned on. You can restart your phone, but it will kick in after some seconds.

Apart from doing extensive testing of block screens, I would like to see one important feature added to the app, and that is bulk edit. Blocking apps take one step, so restricting access to multiple apps is a bit easier. However, if you need a more fine-grained control of several apps, you need to apply these settings individually, which is simply way too much work, considering that you need to configure things for each day of the week.

Limitly is full of good ideas and neat features. Having an app enforcing limits on what your kids (or even yourself, if you have the discipline) do on their phones with such a granular control is surely great. The quarantine apps idea is really good and prevents your kids using recently downloaded apps. The setup tries to be as friendly as possible with a thorough explanation of what you can do. However, if I found an easy way of unblocking apps, then kids surely will. Until the app features a more robust and tested blocking system, you’ll have to look elsewhere.

Download and install Limitly from the Google Play Store.