The Good The KitchenAid KDRS407 dual-fuel slide-in range is an impressive piece of cooking equipment, from its industrial design to its ability to produce delicious dishes.

The Bad This oven is more than $4,000, so I expected some speedy cook times. But I’ve reviewed ranges that are less expensive and can perform common cooking tasks much quicker than this KitchenAid.

The Bottom Line With the KDRS407, KitchenAid maintains its reputation for making beautiful ranges that cook food well. Consider this range when looking at dual-fuel models.

When I started writing this review of the KitchenAid KDRS407, one question loomed over my head as I tried to assign a score this dual-fuel, commercial-style range: What’s more important in oven test results — speed or substance?

No one wants to stand over a cooktop all day waiting for a pot of water to boil. We want an appliance that can quickly complete mundane tasks so we can get to the eating part sooner. And when it came to basic functions like boiling or broiling the KitchenAid KDRS407 lives up to the expectations I had for this $4,649 range, but doesn’t surpass them. This is especially underwhelming when scanned through less expensive ranges I’ve reviewed that have performed much faster in the test kitchen.

If this range’s middle-of-the-road cook times are a turn off, consider the faster-cooking KitchenAid KSEG950ESS or Samsung NE59J7850WS slide-in ranges. Need something less expensive? Take a look at KitchenAid’s lower-cost freestanding ranges, such as KitchenAid KGRS306BSS.

Like the look of commercial ovens? Check…
See full gallery

Solid as a rock 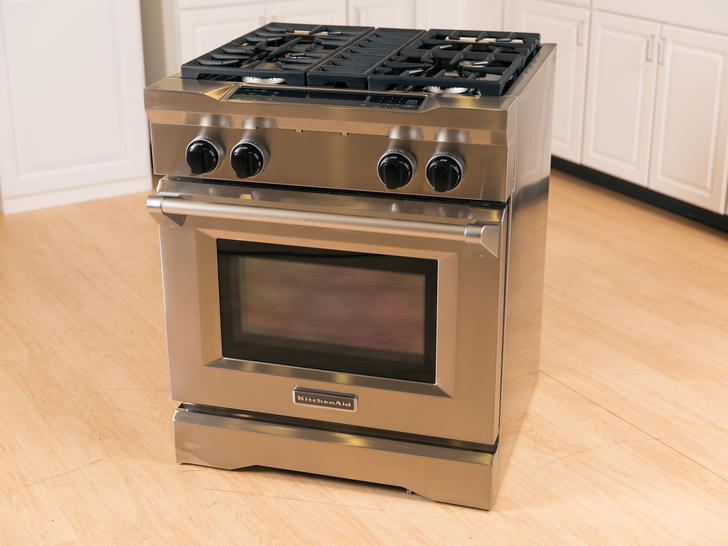 KitchenAid took several cues from commercial appliances in the design of the KDRS407. The company enhanced its usual minimalist design by equipping the stainless steel KDRS407 with hefty burner knobs and a blocky profile. The 30-inch wide unit is topped with cast iron grates over the four-burner cooktop, which completes the imposing presence of this range. The touchscreen control panel from the oven lies flat and parallel to the burners, so it recedes into the background when you’re taking in the range’s overall appearance.

But be warned: The tank-like exterior can be deceiving. The KDRS407 looks like it would have a lot of space in which to bake, but the capacity of this electric oven is only 4.1 cubic feet (we usually see five or more cubic feet of space in the average oven). And KitchenAid forgoes a fifth middle burner on the cooktop, which results in a dead zone in the middle of the oven. I’ve complained about oblong middle burners hogging cooktop space, but I’ve come to expect them on mid-priced ranges from brands like KitchenAid.

Even baking and roasting, courtesy of the convection fan

Convection fans have become commonplace for most ovens that surpass $1,000. The fan, located in the back wall of an oven, distributes heat while you’re using the oven so that your food cooks more evenly. The KitchenAid KDRS407’s convection fan performed well when it came to baking and roasting. And if you’re unfamiliar with adapting a traditional recipe to a convection oven, the KDRS407 (like many other ranges at this price) has an EasyConvect Conversion feature that will automatically reduce the oven temperature and/or cooking time depending on what you’re cooking.