Apple’s smartphones have been released on a “tick-tock” cycle since 2008. The iPhone 6 lineup represented a “tick” year, which involved a complete design overhaul, while the iPhone 6s lineup was part of a “tock” year, which generally focused on camera and processor improvements, new features such as 3D Touch and Live Photos, and incremental refinements like faster Touch ID, LTE, and Wi-Fi. 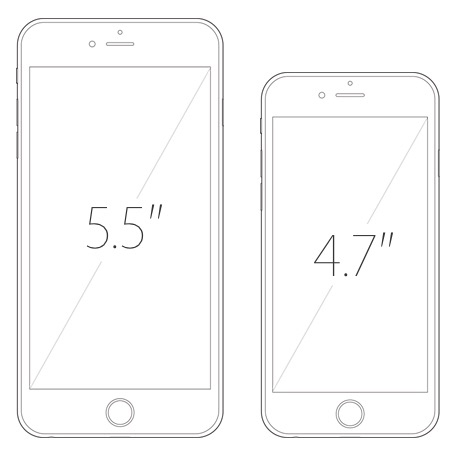 Apple fulfilled consumer demand for larger-screen smartphones with the 4.7-inch iPhone 6 and 5.5-inch iPhone 6 Plus, and it retained those sizes for the iPhone 6s and iPhone 6s Plus. If you prefer another screen size, the so-called 4-inch “iPhone SE” is expected to be announced at Apple’s rumored March media event. All older iPhones released in 2013 or earlier also measure between 3.5″ and 4″ diagonally.

Virtually all other design aspects of the larger iPhones are the same, including a unibody aluminum shell, 2.5D curved glass, round edges, pill-shaped volume buttons, circular speaker grilles, and more. Apple has always stuck with nearly identical designs for iPhone “S” models, including the iPhone 3G and iPhone 3GS in 2008-09, iPhone 4 and iPhone 4s in 2010-11, and iPhone 5 and iPhone 5s in 2012-13. 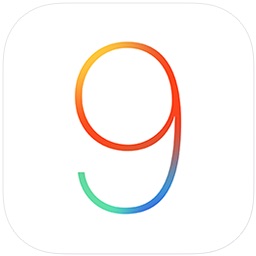 iOS 9 is focused on intelligence and proactivity, enabling iOS devices to learn user habits and act on that information through app suggestions, notifications, and a customized “Siri Suggestions” interface populated with the user’s favorite contacts and apps, nearby places, and relevant news stories.

Apple may have used a smaller battery to make room for vital 3D Touch components in the new iPhones, both of which include a new part called a “Taptic Engine.” The Taptic Engine provides haptic feedback for 3D Touch gestures and also powers the vibrations for alarms and notifications. 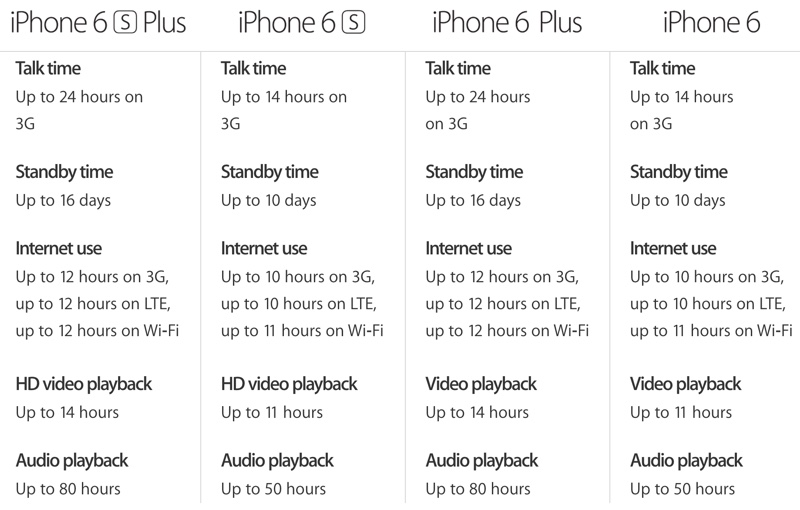 Nevertheless, efficiency improvements introduced with the A9 chip and other performance enhancements have resulted in the two devices offering the same battery life as the iPhone 6 and 6 Plus.

New Features Found Only in the iPhone 6s and 6s Plus

Faster A9 Chip with 2GB of RAM

iPhone 6s and iPhone 6s Plus have a 64-bit Apple A9 chip with 2GB of RAM for up to 70% faster CPU performance and up to 90% faster graphics compared to the 64-bit A8 chip with 1GB of RAM in iPhone 6 and iPhone 6 Plus. The upgrades result in apps opening slightly quicker and overall improved speed across iOS, apps, and games. 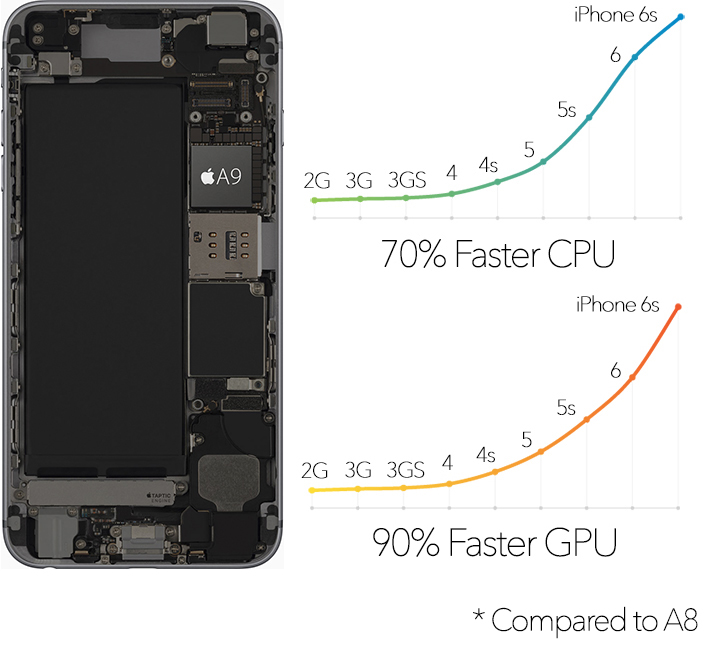 Apple has also directly embedded the M9 motion coprocessor into the A9 chip for increased performance and efficiency. Both the iPhone 6’s M8 and iPhone 6s’s M9 connect to the accelerometer, compass, gyroscope, and barometer for fitness tracking, but only the M9 is efficient enough to detect audio input in the background for always-on “Hey Siri” functionality on iOS 9 or later. 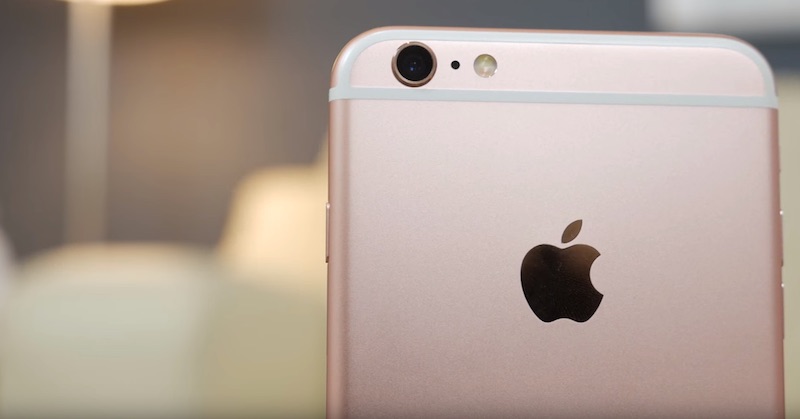 The FaceTime camera’s jump to a 5-megapixel sensor is especially noticeable, resulting in significantly reduced noise for “selfies” and other photos. The front-facing shooter still lacks LED flash, but Apple introduced a new feature called “Retina Flash” that flashes the display when you take a photo. The feature is based on a custom chip that makes the display flash up to three times brighter than usual. 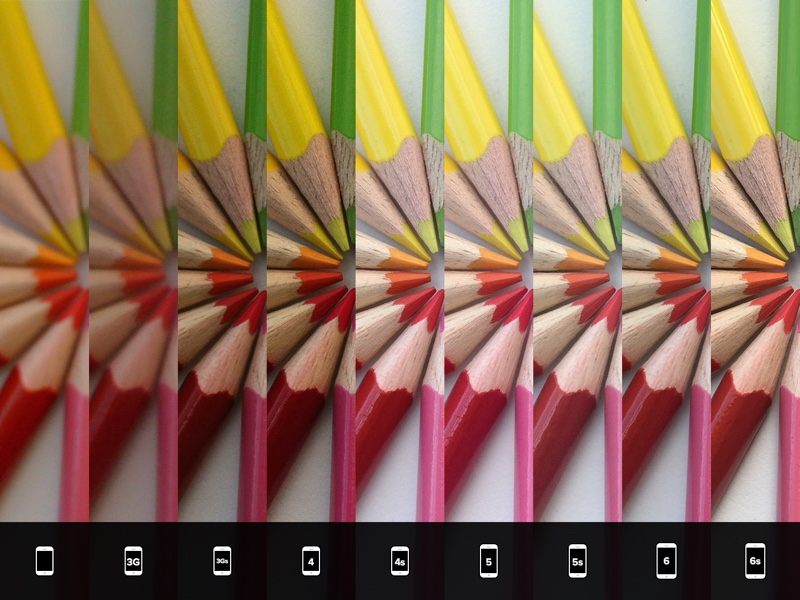 Live Photos is a new feature exclusive to the iPhone 6s and iPhone 6s Plus. When enabled, the feature captures an extra 1.5 seconds before and after a shot, with the footage being used to animate the photo with movement and sound. The result looks something like a short GIF.

When a 3D Touch press is used on a photo, it comes to life with animation to add a bit of context. Live Photos are not true videos, but rather a combination of a 12-megapixel JPG with a MOV file that contains 45 frames playing back at around 15 frames per second. Live Photos take up about twice the space of normal photos.

Live Photos can still be viewed on iPhone 6 and iPhone 6 Plus.

iPhone 6s and iPhone 6s Plus models have new pressure-sensitive screens that can detect the level of force applied to the screen, allowing for a new technology called 3D Touch. The new feature builds upon traditional multi-touch gestures like tapping, pinching, and swiping by introducing two more interactions called Peek and Pop, Quick Actions home screen shortcuts, and pressure-sensitive drawing in supported apps.

Peek and Pop enable you to preview content within iOS apps without opening it. If someone sends you an address in Messages, for example, you can press down the screen lightly to Peek at the location on Apple Maps, without leaving the conversation. If you want to view more details about the address in Apple Maps, you can press a little bit harder and the Pop gesture will switch you to the app.

Quick Actions are one-tap shortcuts that work right from the Home screen by firmly pressing on the icon of any supported stock or third-party app. By pressing on the Facebook app icon, for example, a Quick Actions menu pops up with shortcuts for writing a post, uploading a photo or video, taking a photo or video, or viewing your personal profile. Many popular apps have been updated with the feature.

But is 3D Touch something that you will use? For some iPhone users, the feature is not as natural of an experience as tapping, pinching, or swiping, so it may take some time before Peek and Pop gestures become registered in your muscle memory. Even then, Peek, Pop, and Quick Actions trim only a few seconds off most tasks. Ultimately, the convenience of 3D Touch comes down to personal preference.

iPhone 6s and iPhone 6s Plus have a next-generation Touch ID sensor that detects your fingerprint faster, but the difference only amounts to a fraction of a second over the iPhone 6. Some users have complained that the new Touch ID is actually too fast, preventing access to the Lock screen when pressing the home button.

Apple says data speeds on the iPhone 6s and iPhone 6s Plus are theoretically up to twice as fast — up to 300 Mbps — with LTE-Advanced, and the 23 supported LTE bands are the most of any smartphone. 802.11a/b/g/n/ac Wi‑Fi with MIMO is also up to twice as fast on iPhone 6s, with theoretical speeds up to 866 Mbps. The improvements lead to faster web browsing, messaging, video buffering, and other data-based tasks.

Which iPhone Should You Buy? 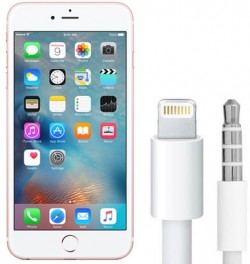 If you are planning on purchasing a new iPhone, consider holding off for about six months if possible. Apple’s much-rumored iPhone 7 will likely be released in September, and the next-generation flagship smartphone is expected to be significantly different than the iPhone 6s.

Multiple sources have reported, for example, that Apple will remove the 3.5mm headphone jack on the iPhone 7 in favor of an all-in-one Lightning connector for audio output, charging, and connecting peripherals.

The iPhone 7 would support Lightning-equipped headphones, along with Bluetooth wireless headphones as usual. Apple may also release a digital-to-analog adapter that supports EarPods and other wired headphones with 3.5mm stereo jacks. The device may also have a dual-lens camera system. The new hardware could be based on LinX technology, allowing for brighter and clearer DSLR-quality photos and several other major advantages.

Other rumors claim the iPhone 7 could have a fully waterproof design, stereo speakers, no rear antenna bands, a flush rear camera, and wireless charging if readied in time. The device is expected to be thinner overall and, like the iPhone 4, iPhone 5, and iPhone 6, could have an entirely new design aesthetic. The screen sizes will likely remain 4.7″ and 5.5″ like the previous two generations.

Meanwhile, Apple will reportedly launch a new 4-inch iPhone at its rumored March 21 media event. The so-called “iPhone SE” is expected to resemble an upgraded iPhone 5s with an A9 chip, 12-megapixel rear-facing iSight camera, 16GB and 64GB storage capacities, NFC for Apple Pay, VoLTE calling, and more. The device will likely be Apple’s entry-level iPhone and could have a lower price accordingly.

If you must purchase a new iPhone now, the iPhone 6s and iPhone 6s Plus are unsurprisingly Apple’s best smartphones right now. The A9 chip, 3D Touch, Live Photos, improved cameras, second-generation Touch ID, faster LTE and Wi-Fi, and many other new features are worthwhile upgrades, while the iPhone 6 and iPhone 6 Plus remain good options for budget-conscious customers.

If you you take a lot of photos with your iPhone, consider purchasing the iPhone 6s or iPhone 6s Plus. The smartphones have significant camera upgrades, including higher-megapixel iSight and FaceTime lenses, 4K video recording at 30 FPS, Retina Flash, larger panoramas, and optical video stabilization on the iPhone 6s Plus.

The iPhone 6s or iPhone 6s Plus are also ideal if you plan on keeping the iPhone for a while, as both smartphones are notably faster and will remain more competitive with future-generation devices. Apple’s A9 and A9X chips will likely continue being used in 2016 devices, including the so-called “iPhone SE” and new 9.7-inch iPad.

3D Touch is also a major new feature that makes the iPhone 6s and iPhone 6s Plus worthwhile. Apple has included similar pressure-sensitive screens on the Apple Watch and MacBooks, and it will likely expand the technology to other devices going forward. Many developers are still updating their apps with 3D Touch support.

Nevertheless, the iPhone 6 and iPhone 6 Plus are still very capable smartphones for those on a budget. Apple no longer sells Gold or 128GB versions of the devices, but the models that remain are each $100 cheaper than the comparative iPhone 6s and iPhone 6s Plus model. Both smartphones should continue to receive the latest iOS updates for at least three to four years.

Ultimately, choosing between the iPhone 6s and iPhone 6 comes down to price and features. You can decide to save $100 by purchasing the older iPhone 6 or iPhone 6 Plus, or put that money towards a package of new features, including an A9 chip, 3D Touch, Live Photos, improved cameras, second-generation Touch ID, faster LTE and Wi-Fi, 7000 series aluminum, and more.