Windows 10 is well and truly upon us and in case you didn’t know Microsoft has made a big deal out of its Lumia phones. Plenty have arrived from the top end Lumia 950 to the Lumia 550. The latest edition is the affordable Lumia 650.

Windows 10 is here to unify Microsoft’s software platform by using cloud services and smart integration. The result is a steady experience from PC to tablet to smartphone. This even applies, in part, to lower end devices.

The Lumia 650 is for those on a budget, at £150, that still want the Windows 10 experience but also a decent build quality. It’s primarily aimed at businesses but, at that price, could have appeal for everyone.

Microsoft showed off the new Lumia 650 at MWC where we went hands-on.

Despite the Lumia 950 being a flagship device we were struck by how plastic its polycarbonate shell felt in the hand. The far cheaper Lumia 650 actually impressed us on first handling the smartphone. It’s still a polycarbonate shell, like the 950, but the metallic frame and heft of the device gave it a premium feel, despite the price.

The camera on the rear is slightly protruding while the front glass has nicely curved edges that slide into the frame. The side buttons are metal and have a premium feel to the click.

There is a reassuring weight to the handset, while still remaining light enough to sit in your pocket unnoticed. It’s also very slim with excellent grip in the hand. This feels like a handset that will last. 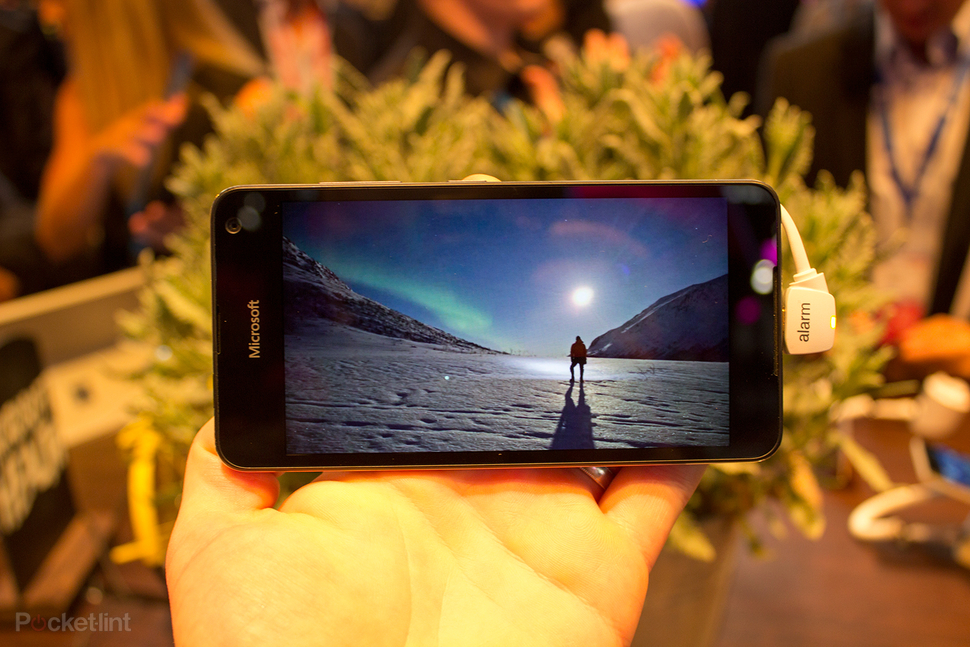 The Lumia 650 features a screen that sounds pretty old fashioned in writing. It’s a 5-inch 720 x 1280 resolution display with 293ppi. Despite, on paper, sounding poor, it actually looks fine.

Lumia’s have traditionally had decent ClearBlack screens and the punchy colours offset with deep blacks and minimal reflection helps the lower resolution of this one. Don’t expect to spend hours on here reading tiny type fonts but for most uses it will do the job just fine.

The Lumia 650 isn’t packing top end power with a more affordable quad-core Qualcomm Snapdragon 212 processor backed by 1GB of RAM. The result is a bit of a wait at times.

In our experience loading up websites took considerably longer than it would on a higher end smartphone, even over Wi-Fi. That said the camera and gallery loaded quickly, so there is a chance this is an internet issue. Talking of, this phone doesn’t have 4G LTE. You’re limited to 3G speeds when out and about, which might be why it’s only built to handle slower page loading, even when Wi-Fi opens up the connection speed.

Another limitation of the lower end specs is the inability to use Continuum. While apps will work across devices via the cloud, Windows 10’s ability to output to a screen as a full PC won’t feature on the Lumia 650. The power just isn’t decent enough to support this feature. Seeing as this is a major Windows 10 pull, that’s a real shame.

The build does support Cortana though, which responds as quickly as on other phones, so that’s a win. The rear camera on the Lumia 650 is an 8-megapixel, f/2.2, autofocus snapper with LED flash. In our limited time with it the response was rapid with quick opening and fast autofocus. Shooting in quick succession was also taken in the camera’s stride. Perhaps some shots could have been brighter though, which is a worrying for night shots when you consider this was quite well lit.

The selfie camera is a 5-megapixel unit but, like the rear camera, tops out at 720p for video. While this sort of makes sense for the screen resolution limitations it’s a shame for anything being shot for export to a larger screen.

The build quality of the Lumia 650 is decent enough for the money and the screen, despite being 720p, does its job well. There’s a heft to the handset that makes it feel strong, like it will last.

Limitations to processing power, camera resolution and connectivity really pull the phone down. Yes the price is low at £150, but without Windows 10 Continuum, 4G or 1080p video recording it’ll be a no go for some.

If you want Windows 10 on a budget this is a good option, but for the full Windows 10 experience it might be worth spending a bit more for a higher end Lumia model.

Read more from News
← Sony Xperia XA: Edge-to-edge beauty
Ebook reader powered by the sun will let you read forever without plugging in →