The Cat S60 is a huge leap forward for the company. It’s no longer just about being the most tough phone on the planet, it’s now about being cutting edge too. As such Cat has crammed in a Flir thermal imaging camera, full Android 6.0 Marshmallow OS and more into its S60.

Older Cat phones often meant compromising on features for toughness. The idea behind the S60 is to offer everything other phones manage and even more.

That in mind Cat has crammed in myriad extras like dual-SIM functionality and 4G LTE connectivity.

We got to grips with the handset to see just how far Cat has come.

The thing to really shout about is the Flir thermal imaging camera. This isn’t just for a bit of fun so you can pretend to see like Predator. This is aimed at professionals. Plumbers will be able to find a leak under the ground using the heat vision, electricians can find a faulty fuse at a glance and you can check heat loss on a potential new house you might move to. It’ll even work up to 100 feet away.

The camera offers a great function where you can tap an area and be told the temperature. Or select a box and resize to fit where you want and it will read out the point of highest and lowest temperatures. Ideal if looking for a leak, say.

The Flir thermal camera works for photos, panoramas and videos.

Anything with the Cat name on it is going to be tough. Despite looking more like a day to day phone the S60 still sticks to its hardy Cat heritage.

Firstly you can drop the handset from up to 1.8 metres and it’ll bounce back just fine. That’s largely thanks to a strengthened Die Cast Frame that makes it MIL Spec 810G, for those that speak the language of tough. Should that drop be into water there’s still no need to worry as it’s waterproof up to five metres for an hour. It’s good for two metres in normal mode but has physical switches on the speaker and mic to shut them off when going down to five metres. This all also means it’s dustproof too. 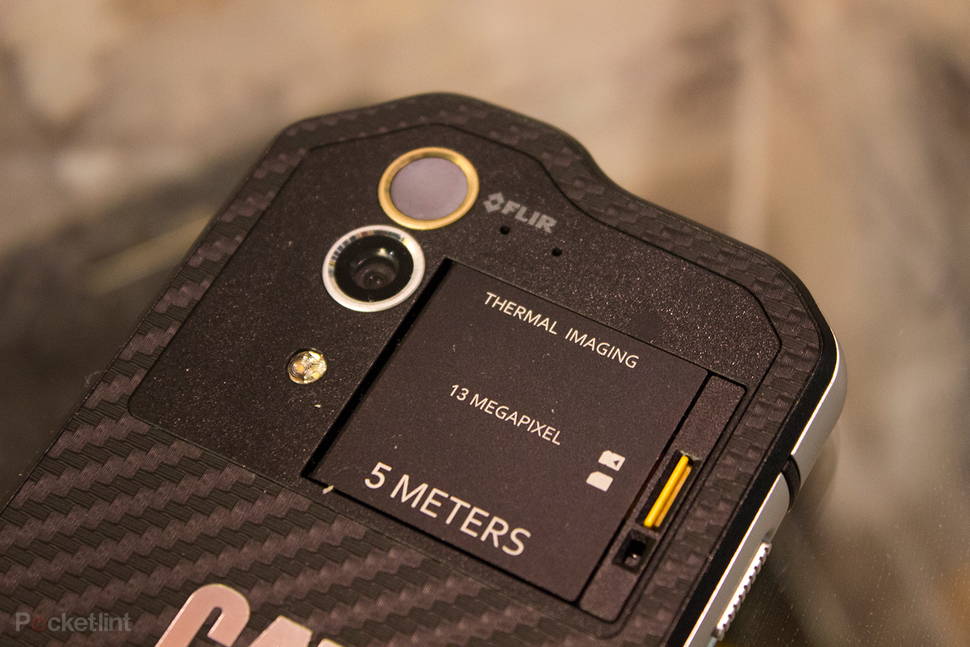 The camera on the S60 is built to be tough but functional. If you’ve got a handset that can survive diving down to depths of five metres you’re going to want to take advantage of that. So the 13-megapixel rear camera is fully functional underwater – it even has a dual-flash. If you want selfies the 5-megepixel front-facing camera should capture your best underwater face just fine.

Looking at the pics, or anything else, is easy thanks to a nice bright 4.7-inch HD display that kicks out 540 nits. Of course this is tough too with Gorilla Glass 4 coating it for protection. Plus it’ll remain touch sensitive even to gloved and wet fingers.

Powering everything is a Qualcomm Snapdragon 617 octa-core with 3GB of RAM and 32GB storage. It zipped along in our experience with no noticeable lag. Thanks to the 3800mAh battery it should last for plenty of time too. That’s presuming you’re not blaring out music on the 105dB speaker constantly, of course.

Thanks to a dual-SIM slot you can use this as a work and personal phone, a feature aimed at those working on site. Cat has also crammed in a microSD slot for memory expansion. We like that both are easily accessible through the simple flip of a back panel.

Cat has made huge progress of late and the S60 is the epitome of that. Not only does the company offer a phone that can be carried worry-free and case-free in most scenarios, but it does more than a lot of flimsier phones.

We loved the carbon rear finish and metallic buttons, even the yellow of the waterproof buttons was cool. As for that Flir camera, well its size and integration were both impressive, leaving a genuinely attractive finish to this handset.

The price, at €650 or $600, isn’t cheap. But when you consider you’re getting everything a normal phone offers plus a heap more, it’s really a decent deal. The Cat S60 will be available “later this year”.

Read more from News
← You can go on a VR journey with Sir David Attenborough and a giant dinosaur here
Best smartphones of MWC 2016: Samsung, LG, Sony, HTC and more →