Viper unveils new app which can lock, unlock and even start your car using your smartwatch 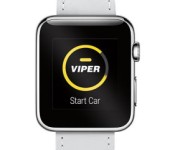 Renowned car security experts, Viper, have just unveiled their very own Android Wear application which will bring the ability to start, unlock/lock and even track your car directly from your wearable, provided you have Viper SmartStart 4.0 installed.

Viper’s system unit can be purchased from a dealer in the U.S. for $149.99. If you already own one of these and have an Android Wear smartwatch, it’s as simple as downloading the app and letting it do the rest for you.

The app will also be available for the Apple Watch when it will be officially launched later this year. Viper has issued an update to the SmartStart 4.0 app on Android bringing some intuitive controls to the fore. More details will follow about the launch timeframe of this application.

“Wearable technology will give Viper SmartStart users the ability to feel connected with their vehicle in an even more accessible and convenient way,” said Frank DeMartin, Senior Vice President of Development and Engineering for Viper. “Whether people choose to use Viper SmartStart through their smartphone, smart watch or both, the updated Viper SmartStart 4.0 app will enhance their ability to seamlessly communicate with their car.”

Come comment on this article: Viper unveils new app which can lock, unlock and even start your car using your smartwatch