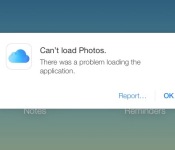 As reported by 9to5Mac, Apple’s iCloud.com Photos app has been experiencing difficulties for the past few days, with many users reporting the icon missing from the web interface entirely and the direct link to the app also producing a “problem loading application” error. In our own testing today, performance has been spotty, with the icon missing at times but present at other times. Even when the icon is present, clicking it has sometimes generated error messages while at other times properly loading the Photos app, albeit with some delays.

Apple has not commented on the situation, and the company’s status page shows no issues with any iCloud web apps. As a result, the reason for the issues remains unknown.

The iCloud Photos app is part of Apple’s iCloud Photo library, which was introduced in beta alongside iOS 8.1. The service stores all iOS photos and videos and shares them across platforms. Images can be viewed using the iOS Photos app and the iCloud Photos web app, which was last updated in November with the ability to upload photos to the user’s library from the web interface. Apple is also working on an upcoming Photos app for Mac, which will replace Aperture and iPhoto.