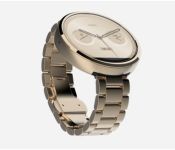 Motorola just announced a slew of new things regarding the Moto 360. The first is that the rumored Champagne Gold Moto 360 is indeed real. It will go for $329 and be available in time for the holidays.

If you have been waiting to get a Moto 360 with a metal band, today is your lucky day. As of today, you can order the Moto 360 with an aircraft-grade stainless steel band for $299. You will have your choice of light or dark. They will also offer slim versions of these bands for those with smaller wrists for the same price of $299. Look for them around the same time as when the Champagne Gold option becomes available.

If you already own a Moto 360, you will soon be able to order the metal bands separately. They didn’t announce a price, but they did tell us at the launch event that they would run $79. Motorola also announced that they will offer interchangeable stone, black, and cognac leather bands. Plus, DODOcase will offer stitched leather bands in four colors and TYLT is working on colorful silicone bands. We presume they will also offer the new slim bands as an accessory as well.

Now we move onto watch faces. A new update to the Motorola Connect app should hit within the next few days, which will bring new watch faces and customizations. Now you will be able to change the background images as well as the style of tick marks and watch hands. BTW, one of the new watch faces will be the winner of the Moto 360 Design Face-Off.

Last but not least, Moto Body was announced. With Moto Body, you will be able to track your steps, distance, heart rate, and calories. Moto Body will also give you goals based on your activities. This update will arrive with the Motorola Connect update.

If you have any questions, you can join Motorola for an Ask Me Anything (AMA) on Reddit tomorrow at 12:30pm to 1:00pm CT.

I think that’s everything. Current and future Moto 360 owners have to be excited.