From beginning to breakup: a history of HP’s highs and lows 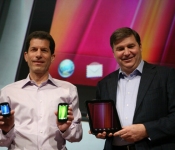 HP’s recent decision to split into two companies is undoubtedly a big deal. It’s a cornerstone of Silicon Valley, and it has been synonymous with PCs for much of its lifetime. However, this is really just the latest chapter for a technology legend that has witnessed plenty of triumphs and disasters throughout its 75-year history. We’ve rounded up some of its greatest and lowest moments in a gallery, ranging from its humble beginnings in a garage to the webOS era and a series of scandals — check them out if you want to know how HP reached yet another turning point.