The Higgs boson could destroy the universe in the wrong conditions 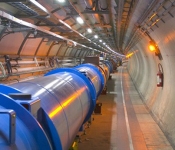 That Higgs boson that everyone was so eager to find last year? As it turns out, it could be the end of everything — in the wrong circumstances, anyway. In his upcoming book Starmus, Stephen Hawking notes that the once-elusive particle could become less than perfectly stable at energy levels of 100 billion giga-electronvolts or higher. If it gets to that state, it could trigger a vacuum bubble that would expand at the speed of light, eventually collapsing all space and time; you wouldn’t even know the disaster was coming if the event happened on Earth.

Don’t start panicking that we’re about to destroy the universe by accident, though. Right now, even a massive accelerator like the Large Hadron Collider has “only” smashed together particles at 3.5 tera-electronvolts per beam. It would take a collider larger than our planet to reach dangerous energy levels. Still, it’s interesting (if slightly disconcerting) to realize that we could theoretically erase existence if we were really, truly bent on it.