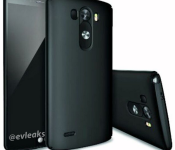 Talk about LG‘s next rumoured flagship, the LG G3, has intensified greatly in the past week, which has been added to by the announcement by LG that there will be an event held in various global cities on May 27th to announce some kind of “G” device. While it’s possible LG may be announcing its Android Wear powered LG G Watch, odds are the Korean manufacturer will in fact be announcing its next flagship device and in a leak of some supposed LG G3 press render material, we get our best look at the device yet.

While these renders appear to corroborate with previous leaks that the device will indeed retain the rear volume buttons of the LG G2, probably the most notable thing in these press renders is the object embedded in the top of the device. Unless we’re mistaken, that looks awfully like a stylus. This is particularly interesting as LG has neglected to even put a stylus on its 5.9-inch LG G Pro 2, however LG may be trying something new with this device. All we can say is that if that really is a stylus, we’re fascinated to see how they’ve integrated it into the LG G3. UPDATE: We’ve also been informed this could be an TV antenna of the South Korea version of the device.

What do you think about the LG G3 having a stylus? Does this change your mind at all about the device? Let us know what your thoughts are in the comments below.