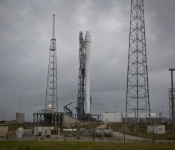 After many “Grasshopper” tests, SpaceX’s first real try at launching a reusable rocket will attempt flight again in just a few minutes — watch the live stream here or embedded after the break. Scrubbed due to a helium leak a couple of days ago, the Falcon 9 rocket is once again facing gloomy skies, but according to launch control, everything is a go. Weather permitting, the launch is scheduled for 3:25PM ET. The Falcon 9-reusable rockets have already undergone their own testing, and you can see the latest video after the break.. Also important is what’s onboard the Dragon cargo ship this rocket is launching. Headed to the ISS, it’s bringing new supplies and a pair of extra-large, bendable legs for our friend Robonaut 2.

Update: We have liftoff. Now that the rocket is aloft, while the capsule will head to the ISS, its first stage will attempt to reenter the atmosphere, and position itself for landing somewhere over the Atlantic Ocean, before falling over into the water. This is still just a test run, but it will help scientists sort out any issues before they attempt a reentry and landing on… land in the future. The live video stream is ending, and it sounds like we’ll have to monitor the @SpaceX Twitter account for updates on the landing attempt.

F9 & Dragon vertical on the pad for today’s launch to the ISS. Weather still a concern–liftoff targeting 3:25pm ET pic.twitter.com/4wRhrtjlbN