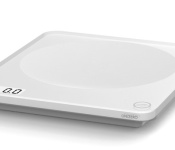 When critics become creators, the results can vary wildly, but the work always requires attention. Former TUAW (full disclosure: one of our sister sites) scribe Michael Grothaus is the latest, having developed a calorie-counting scale that’s helped him lose 67 pounds in the last year. SITU is a smart scale that calculates the nutritional value of the food you’re about to eat. Simply place an item on the balance, connect your iPad over Bluetooth and tell the companion app what the food is and Situ will tell you everything you need to know about what’s inside.

The former Apple employee has always struggled with his weight, but things reached a head after a long dining session at Cupertino’s employee-only dining hall — adding that he “didn’t want to die of a heart attack at 40.” Grothaus (pictured, before and after he began using SITU) also believes that the platform is useful for diabetics who need to control their sugar intake and athletes who need to ensure that they’re getting the right balance of nutrition. Like so many inventions nowadays, SITU is launching on Kickstarter, where a £50 ($87) pledge will earn you one of the scales, and while it’s iPad-only for now, there are plans to bring it to Android smartphones and tablets as well as Windows Phone.