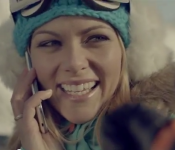 What better way to show off the Galaxy Gear’s features then by having two men trying to woo a young lady at a ski resort. The ad below shows us just how you can win a girl’s heart, by utilizing the Galaxy Gear’s features to impress her. You almost feel sorry the guy without the Gear, because the ad stresses on just how useful the watch can be. From dropping your phone of the ski lift, to dropping a drink you just bought to answer your phone, the Galaxy Gear seems very useful, but we all know these commercials make it seem flawless when we know it is not.

The Galaxy Gear didn’t see the sales numbers Samsung was hoping for, but they still have faith in their smartwatch. There has already been talks about a second generation Galaxy Gear releasing alongside the Galaxy S5, but in the mean time, they are going to continue to promote their first stab at it. Check out the ad below, and let us know what you think.